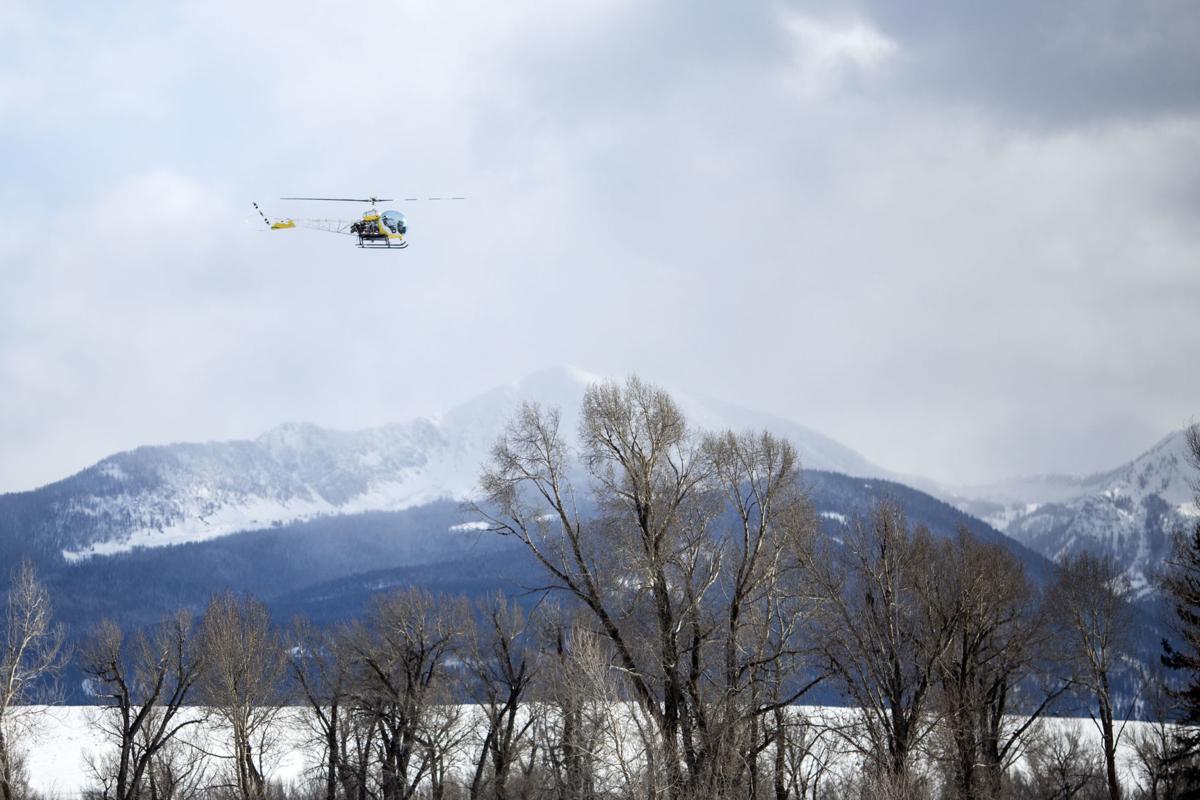 A helicopter flies above the National Elk Refuge last month during an annual review of the Jackson Elk Herd. 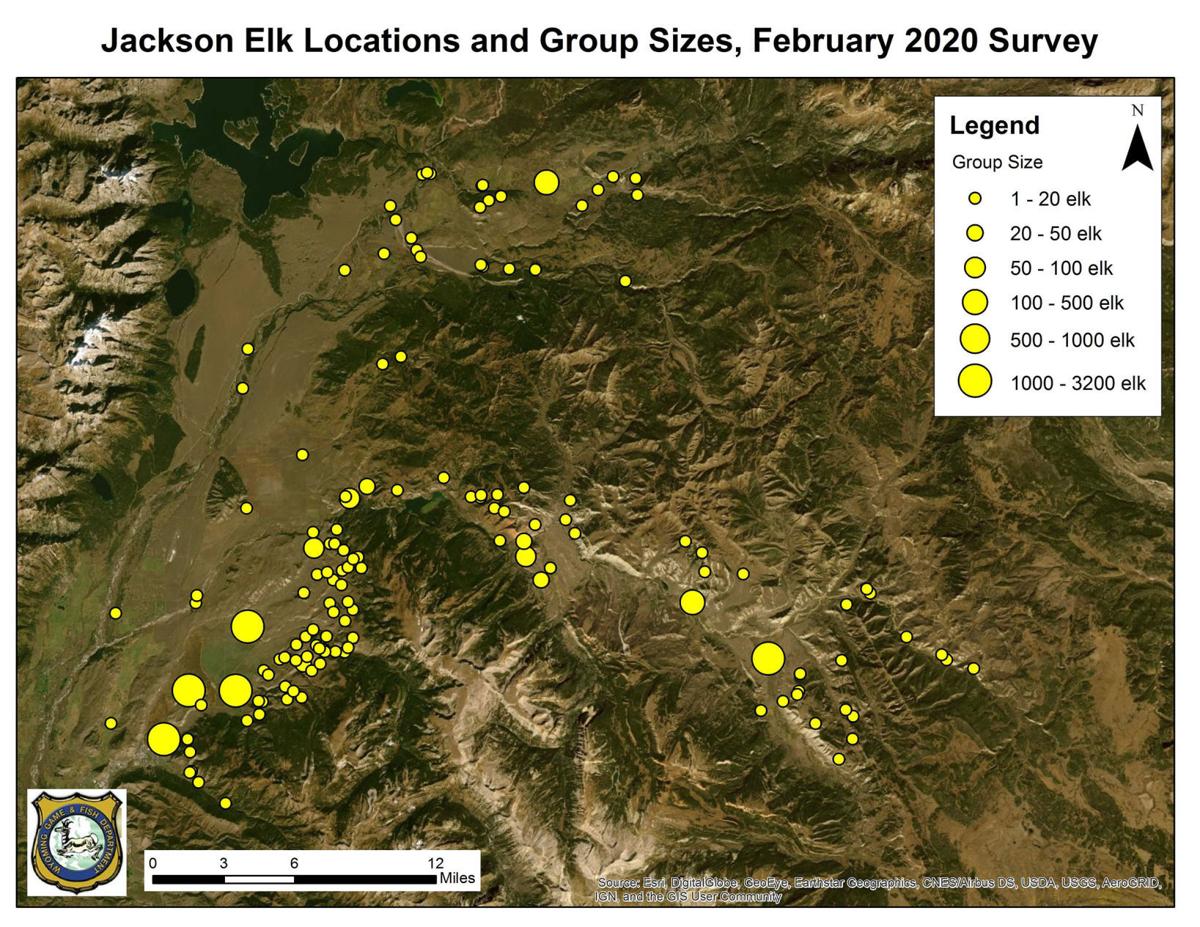 This Wyoming Game and Fish Department map shows where elk were found within the Jackson herd unit during winter 2020 counts.

A helicopter flies above the National Elk Refuge last month during an annual review of the Jackson Elk Herd.

This Wyoming Game and Fish Department map shows where elk were found within the Jackson herd unit during winter 2020 counts.

Jackson Hole’s largest elk herd is thriving and appears to have grown slightly over the past year after hunters had a historically tough time finding animals and filling tags.

Wyoming Game and Fish Department harvest data for 2019 estimates that 794 hunters who targeted zones roamed by the Jackson Elk Herd found success and filled their freezer.

“That’s about half of what it normally is,” Game and Fish wildlife biologist Aly Courtemanch said. “Usually, there’s more like 1,500 or 1,600 elk harvested, both bulls and cows.”

The 30-year average harvest in the Jackson Herd is 2,098 elk, though the kill hasn’t surpassed 2,000 since the early 2000s — when the herd size started shrinking by design.

Fall 2019 elk hunts were slow across the board.

The mature bull harvest in early September and October hunts in the mountains east and north of Jackson was down slightly: There were 554 killed in 2019, well shy of the 30-year average, 877 bulls.

But it was the late-season hunts, aimed at reducing the population by targeting cows and calves, that were especially uneventful for hunters. State harvest data estimates that 207 cows and 25 calves were killed combined in late season hunts in places like the National Elk Refuge, Grand Teton National Park and private land along Spring Gulch Road. The cow harvest was just 22% of the 30-year average; calves killed in the valley amounted to 10% of the long-term average.

It’s not yet clear if Jackson Hole’s slow harvest was an aberration, because Game and Fish hasn’t yet released its statewide harvest reports for elk. Locally, weather likely played a role.

Many of the wapiti that went on to live another day, or year, were later detected in the state’s “classification” of the Jackson Elk Herd, an animal-by-animal count from the ground and helicopter that wrapped up a couple weeks ago.

Tallying animals attracted to the Elk Refuge, Gros Ventre feedgrounds and open range, Courtemanch and her colleagues came up with 10,985 elk — just 15 animals shy of the 11,000-animal herd objective. (The Jackson Hole Daily reported last week that there were 10,927 elk counted in the herd, but the total was upped by 58 animals this week after Game and Fish confirmed it missed a group on Burro Hill in Buffalo Valley.)

Game and Fish does not estimate a population size for the Jackson Elk Herd, relying instead on a hard trend count and the idea that the vast majority of animals are detected.

“Harvest was low, so [the population] did probably increase some,” Courtemanch said. “It was the highest count we’ve had since 2013.

“But it’s hard to speculate,” she said, “because there are a lot of other factors that go into elk numbers than just harvest.”

The previous winter’s count, dating to February 2019, turned up 9,627 elk, but the likelihood is that the 1,300-animal difference was more due to the herds being more distributed on the landscape last winter and thus easier to miss from a helicopter.

The Jackson Elk Herd has been generally stable in size over the past decade, hovering right around the herd goal. Its distribution, however, has been more in flux and less desirable. A trend of animals piling onto the National Elk Refuge continued this winter, when the count came in at 8,095 animals on the feed lines, 62% higher than the refuge’s own goal.

“Overall, this appears to be the typical pattern, where 70 to 80% of the overall Jackson Elk Herd winter on the refuge,” Elk Refuge biologist Eric Cole said.

The Gros Ventre River valley and its three feedgrounds were the second-most-used part of the landscape by the Jackson Herd during the survey. Elk counters on sleighs came up with 1,731 elk on the Fish Creek and Patrol Cabin feedgrounds and another 401 animals spending the winter out on the landscape on “native range.” Total elk counted occupying the river drainage came to 2,132 animals, just two off the 2019 assessment.

In some recent winters elk have almost entirely emptied out of the Gros Ventre, wintering instead primarily on the refuge, though this year and last the numbers have rebounded closer to normal historic levels. Game and Fish and a University of California-Berkeley researcher are studying the elk interchange, and the role that wolves are playing.

Some 33 cow wapiti fitted with GPS collars in the Gros Ventre last fall, before migration, are now being tracked. A quarter of those cows headed to the refuge this winter, Courtemanch said. Extrapolating that ratio to the larger Gros Ventre population, she said that it’s reasonable to think another 700 or so elk reside up the drainage in the summer — meaning about 3,000 total elk.

Cow elk that dwell up the Gros Ventre appear to have fared well raising calves over the past year. The ratio of calves to cows, 29-to-100, surpassed the calf ratio in the herd as a whole, 20, which likely suggests a growing Gros Ventre population, Courtemanch said. As recently as 2014, the Gros Ventre calf ratio was just a dozen for every 100 cows.

The ratio of adult bulls tallied this winter in the Jackson Herd — 23 to every 100 cows — is in line with numbers from recent years.

Trends observed in the Jackson Moose Herd were positive this winter, as the herd continues to rebound from a population nadir in the early 2010s.

Overall, Wyoming Game and Fish Department wildlife biologist Aly Courtemanch counted 306 animals overflying the valleys and surrounding mountains in a helicopter, up from 258 the year before. The citizen scientist “Moose Day” results have not yet been blended in with this year’s total, and typically that adds on 10 to 20 more moose.

“The population isn’t skyrocketing, but it’s slowly showing an increasing trend, which is good,” Courtemanch said. “We saw quite a few twins out there, which is really cool.”

“That definitely indicates a growing population,” she said, “and that’s good.”

The annual winter census of the Jackson Bighorn Sheep Herd turned up 398 total sheep, which is a pretty similar population size to the last 5 years.

“We recovered from pneumonia die-off, and now we’re plateauing at about 400 sheep,” Wyoming Game and Fish biologist Aly Courtemanch said.

The herd was found in its normal wintertime haunts, in the Gros Ventre Range and at Miller Butte, though some animals were found higher up in the mountains than usual.

In the Upper Crystal Creek drainage, there were “large groups” located at 9,000 or 10,000 feet in elevation, taking advantage of open, windswept areas.

“For whatever reason,” Courtemanch said, “the Gros Ventre Range right now is much more open than other areas.”

Wildlife managers came up with 488 animals in the Jackson Herd, about three-quarters of which are spending their winter eating alfalfa on the National Elk Refuge.

Some 131 bison were spotted strewn across the landscape between Kelly and the Elk Ranch area.

“Similar to last year, a substantial portion of the herd has wintered on native winter range, and they’re much more difficult to count,” Wyoming Game and Fish biologist Aly Courtemanch said. “Our best guess is that the actual numbers are probably more around 550 to 600.”

Up north, she said, bison are living in the forests and around the bases of trees, which is “weird.”

Herds sticking tight to the safe zone of Grand Teton National Park made hunting hard, but a last-minute movement to the refuge pushed harvest up to 92 animals by February. Around 100 bison, Courtemanch said, need to be killed annually to keep the herd size around the objective of 500 animals.

The calf count this winter was down a bit, with 39 per 100 cows, compared to an average closer to 50. Bull ratios also fell off, down to 88 per 100 cows, likely because of more bull harvest, Courtemanch said.