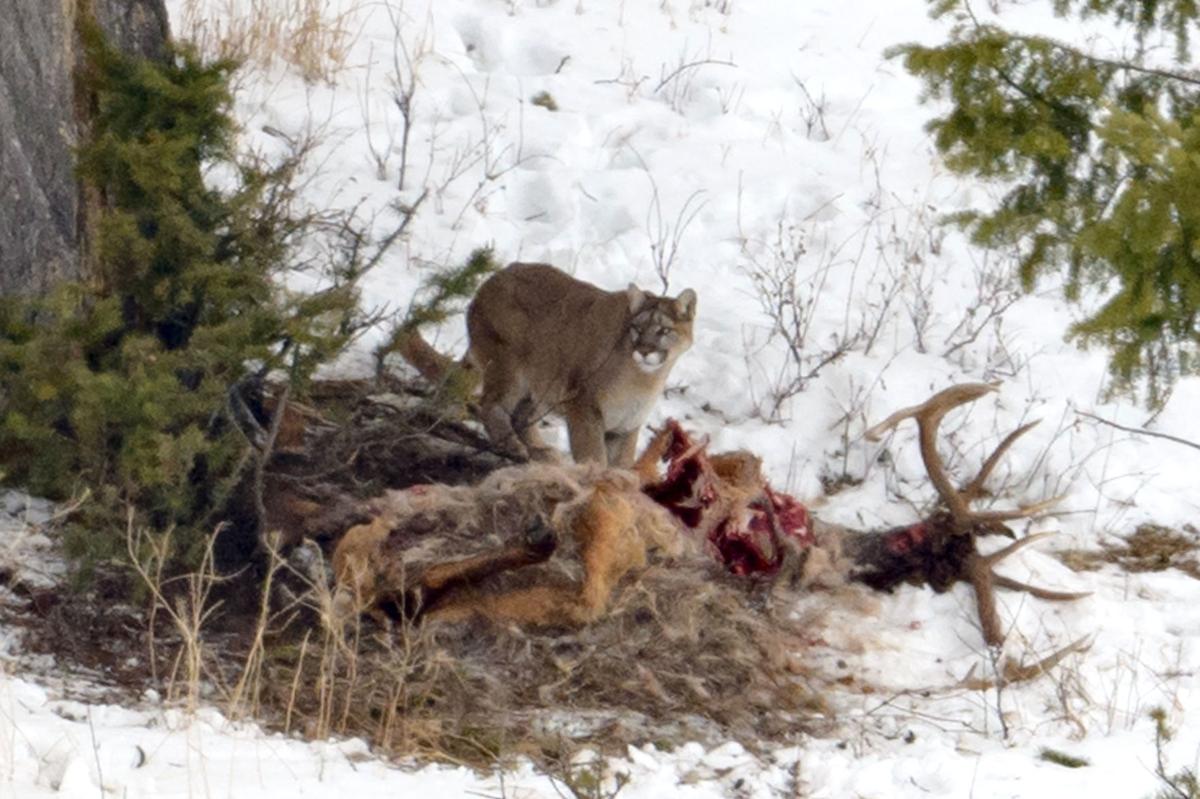 A mountain lion feeds on a bull elk carcass Monday evening on the National Elk Refuge. The cougar was first spotted Friday. 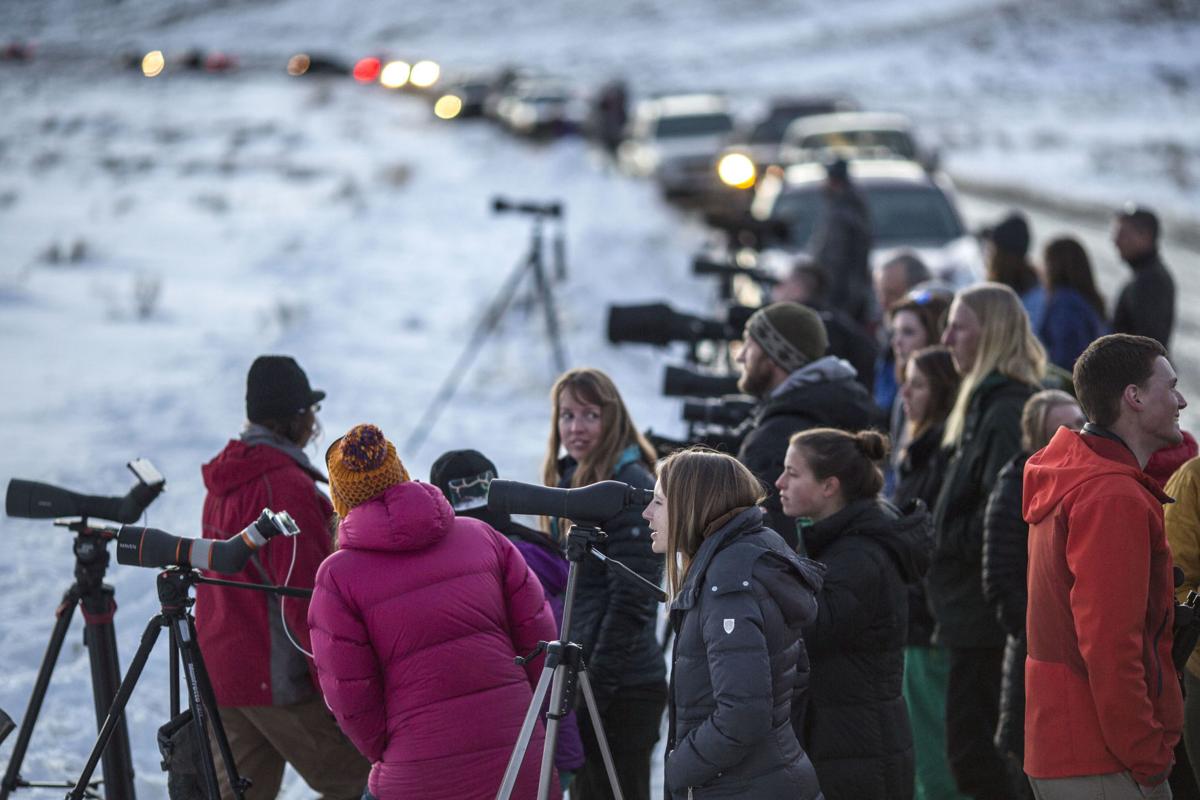 Wildlife watchers gather to catch a view of a mountain lion on an elk carcass Monday evening on the National Elk Refuge. 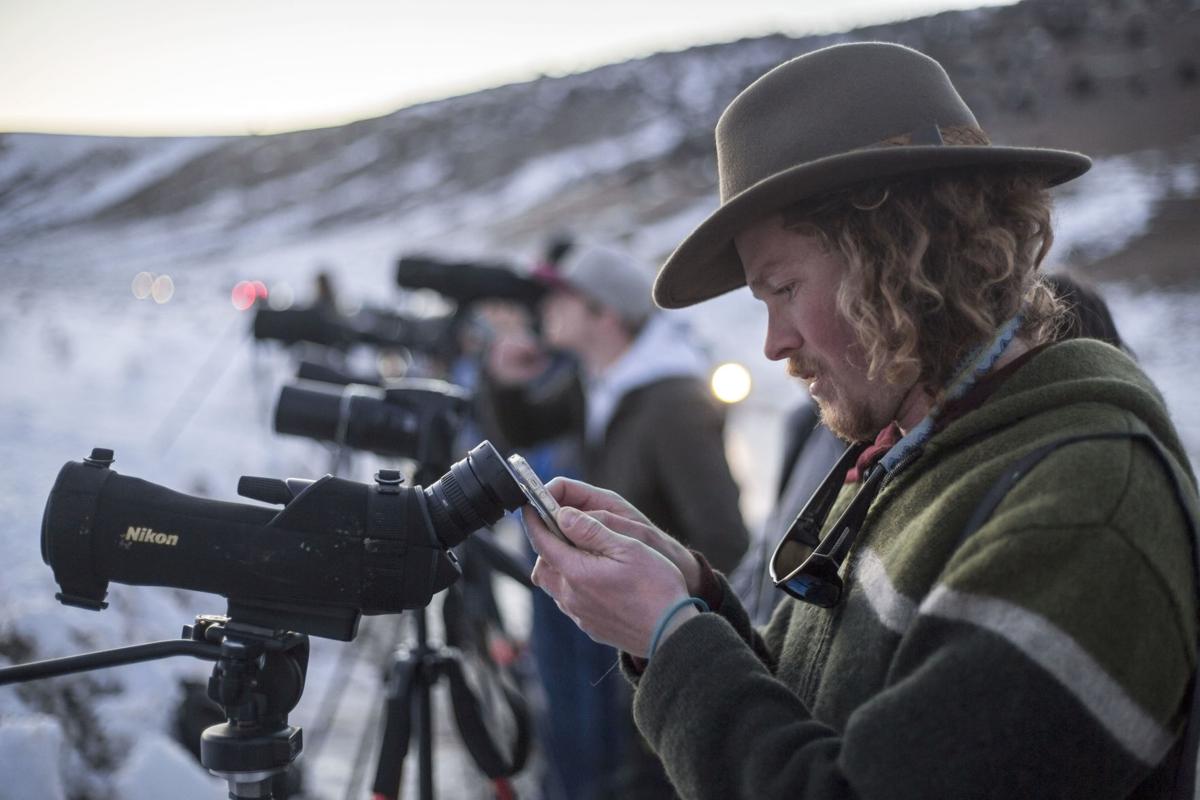 Local ecologist and wildlife guide Trevor Bloom photographs a mountain lion through a spotting scope Monday evening on the National Elk Refuge. Refuge staff has been busy since the lion was first spotted Friday, reminding crowds of wildlife watchers that parking is only permitted in the refuge’s designated turnouts.

A mountain lion feeds on a bull elk carcass Monday evening on the National Elk Refuge. The cougar was first spotted Friday.

Wildlife watchers gather to catch a view of a mountain lion on an elk carcass Monday evening on the National Elk Refuge.

Local ecologist and wildlife guide Trevor Bloom photographs a mountain lion through a spotting scope Monday evening on the National Elk Refuge. Refuge staff has been busy since the lion was first spotted Friday, reminding crowds of wildlife watchers that parking is only permitted in the refuge’s designated turnouts.

Victor, Idaho, resident Gina Bayles posted up near the north end of Miller Butte all day Monday, spending one hour after the next waiting and wishing for a mountain lion to return to its feast.

Save a single bathroom break, she didn’t budge. The dedication paid off. At 6:10 p.m., with four people at Bayles’ side, the cougar padded into view, nestling in alongside a bull elk carcass that has been providing mountain lion meals for at least four days. Word spreads quickly when a large carnivore is in plain sight 10 minutes from Town Square, and within an hour Bayles was in the company of about 50 others, who with their spotting scopes lined Refuge Road.

Hard-core wildlife watchers and those who guide for a living were out in force Monday evening, but the spectacle in the distance also drew in regular townsfolk and fortunate passersby. Pat O’Dwyer ventured onto the National Elk Refuge hoping to see some bighorn sheep, but the Green River resident instead stumbled onto his first cat of 42 years of living in Wyoming.

“I like wildlife,” O’Dwyer said, “and you don’t see this very often.”

The Elk Refuge’s staff and volunteers have put in long days since the cat was first spotted Friday, working to keep traffic flowing and enforce rules against parking on the road’s shoulder.

“We took it as an opportunity to provide some on-the-spot interpretation,” refuge spokeswoman Lori Iverson said. “It’s such unique opportunity to be able to see a mountain lion for such an extended period.”

The last time something similar happened on the National Elk Refuge was 1999. That winter a lioness with three kittens happened to select a Miller Butte denning site that was easily viewable from Refuge Road. The weekslong show fascinated the community, even sparking the formation of a Jackson-based advocacy group, the Cougar Fund.

The 2018 lion is a bit harder to see, more than 500 yards in the distance. It’s feeding in the patchy trees of a closed area along the boundary of the refuge and the Bridger-Teton National Forest, east of Refuge Road. Its days hanging around are also likely much more limited — once the elk meat is gone the cats will also disappear.

So far, Iverson said, lion watchers have been well behaved, though there has been at least one break in the decorum. A man early Monday morning objected to being hushed for fear of scaring the lion, and he was ready for fisticuffs and had the police called on him, eyewitnesses said.

A deluge of lion pics on social media feeds in the valley and beyond are no doubt propelling some of the masses gathering to see the cat.

Tanner Perkes, an out-of-towner, can thank the algorithms for his first-ever glimpse of a cougar. How’d he find out?

“Honestly, Instagram,” said Perkes, who made the drive from Rexburg, Idaho.

“I’d come from a lot farther than that to see the lion,” he said.

Perkes had a chance of getting a double-cat viewing. Over the weekend two cougars, one much smaller than the other, were seen loitering near the quickly depleting bull elk, which also drew in eagles and magpies on Monday. But onlookers weren’t again treated to the second cat.

“So far there’s only been one,” Bayles said.

How wonderful - residents of Wy that are not killing animals - maybe there is some hope!