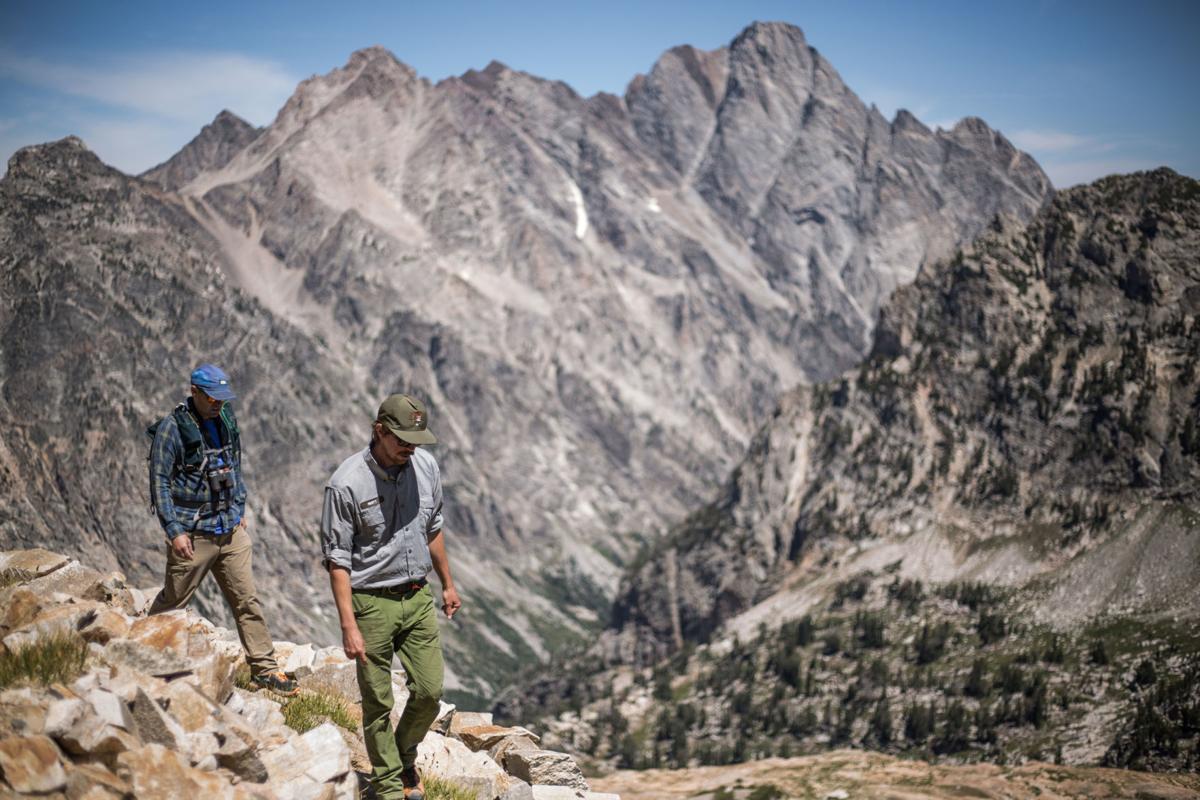 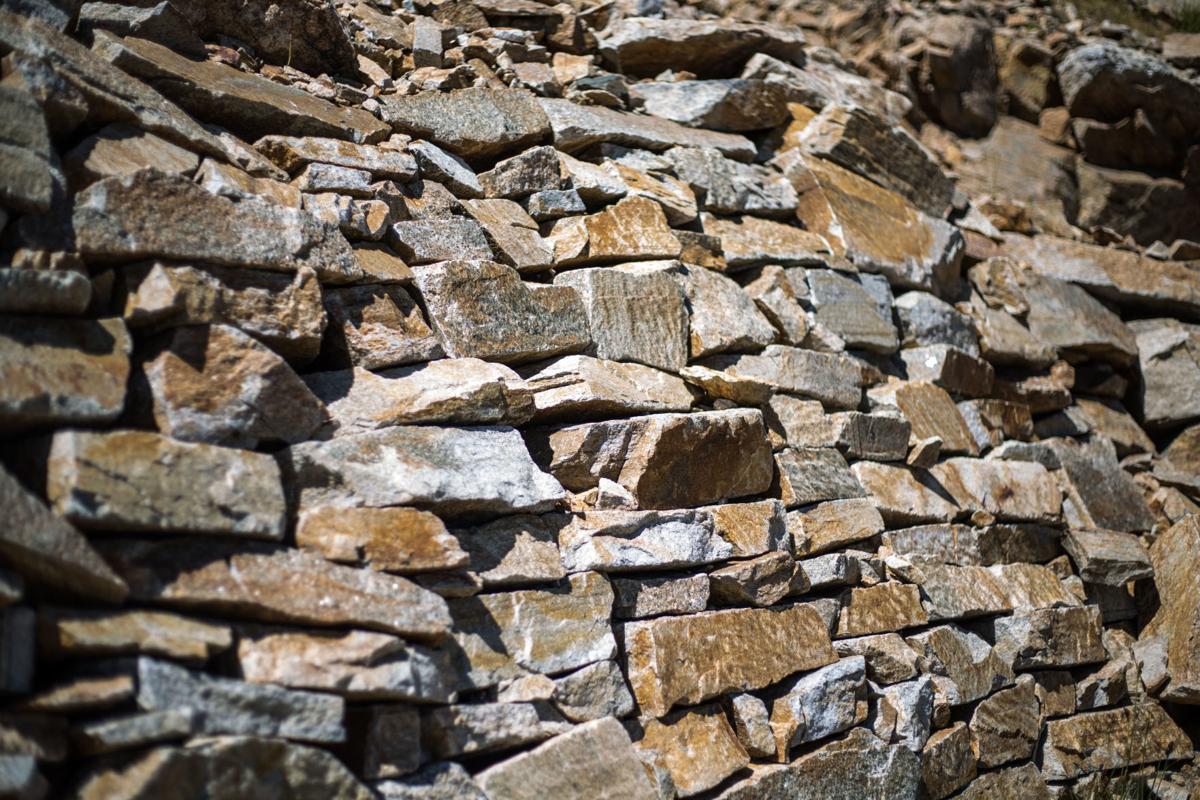 A rock wall built by the Civilian Conservation Corps in the 1930s holds strong at a switchback along an abandoned trail alignment near the Paintbrush Divide. 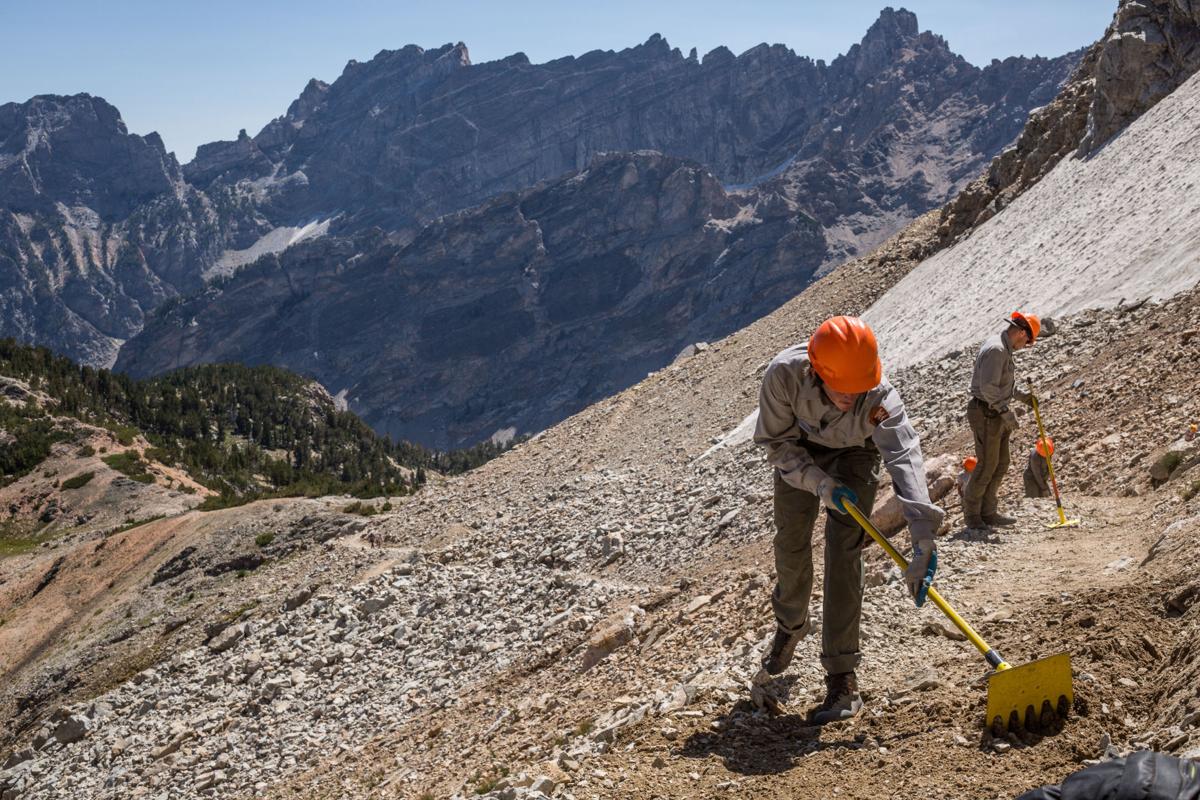 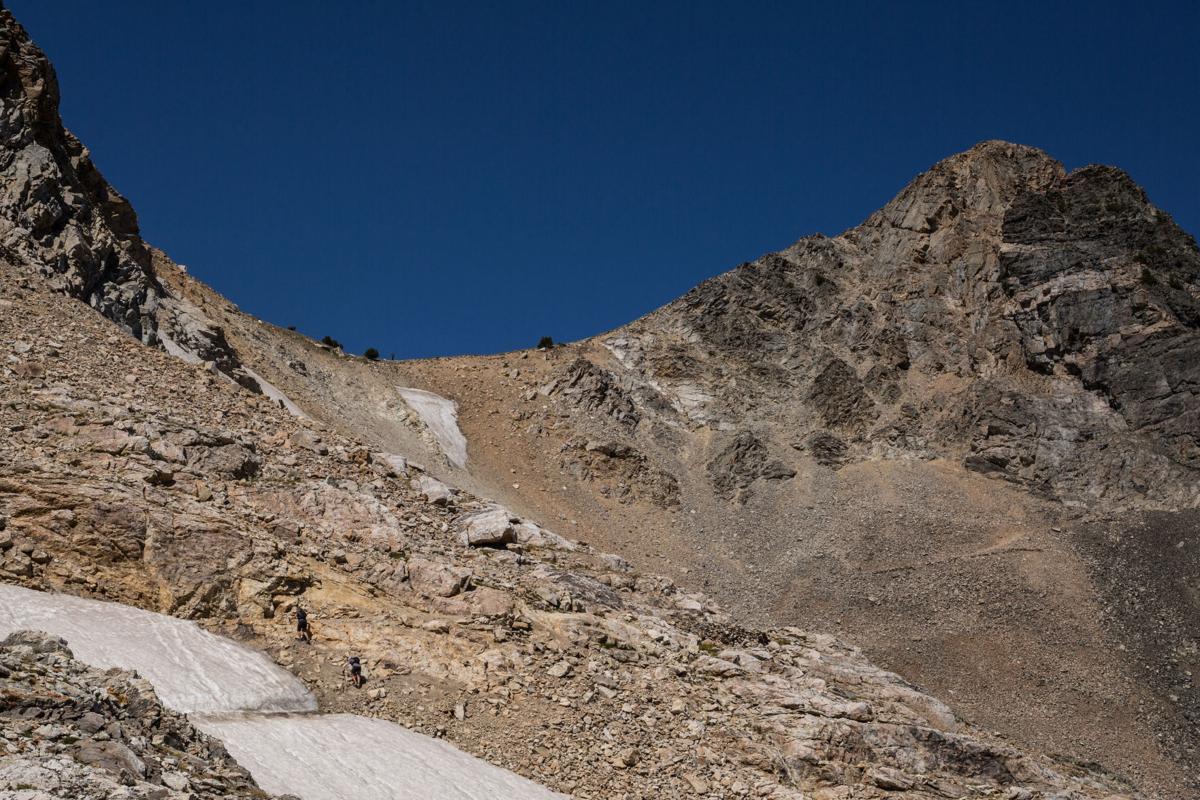 Hikers climb back to the trail after crossing low over a snowfield just below the Paintbrush Divide in Grand Teton National Park. The divide’s dynamic nature and long-lasting snowfield have led to questions about the possibility of reviving a long-abandoned nearby trail alignment built by the Civilian Conservation Corps in the 1930s. 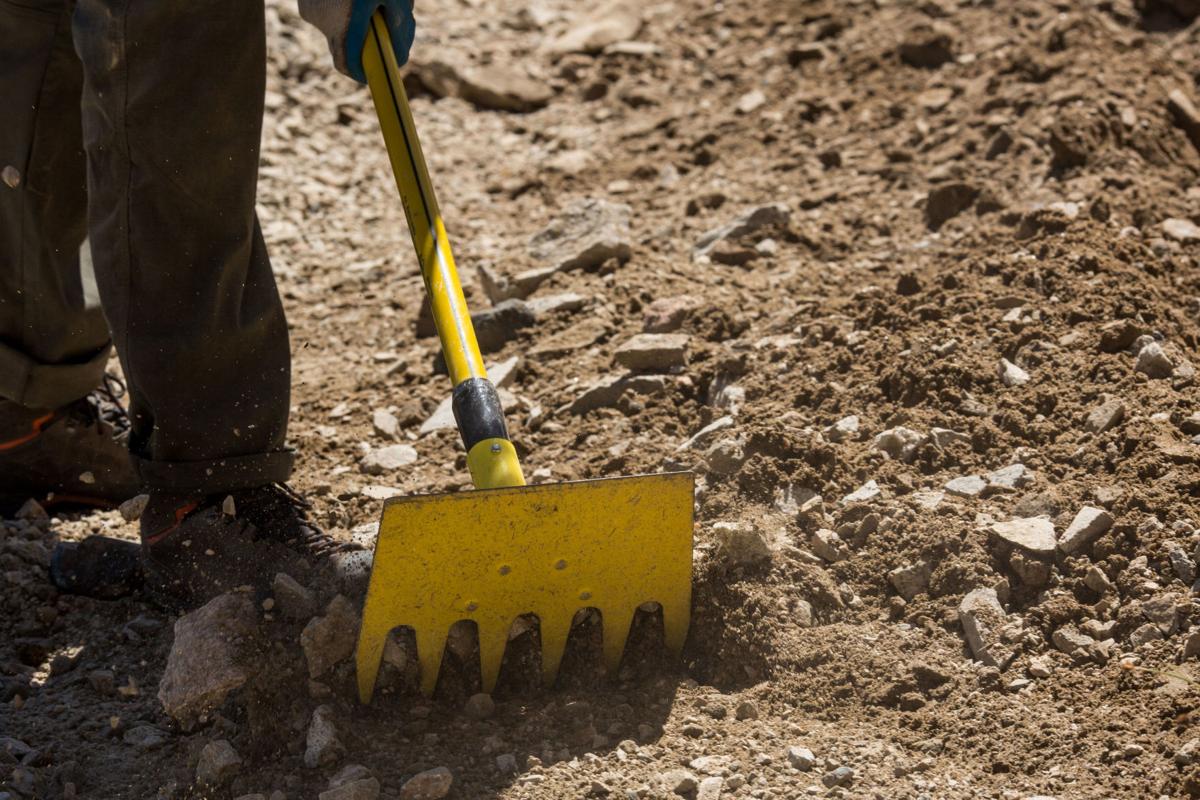 A Grand Teton National Park trail crew worker uses a McLeod rake to “retread” a portion of the Teton Crest Trail below Paintbrush Divide last week. The trail passes across an active scree field that holds snow well into the summer season.

PAINTBRUSH DIVIDE — Soaked in sweat after a long, sunny day’s hike, Brock Foster surveyed a section of the Teton Crest Trail that’s become all too familiar during his tenure at Grand Teton National Park.

Foster, whose job revolves around maintaining Teton park’s 200-plus miles of trail, was face to face with one of the most troublesome stretches within the system.

“We’ve been coming at this spot annually, minus a year or two, for the 22 years I’ve been here,” Foster said last Tuesday. “And after the snow next spring, there will be more to do.”

From a trail maintenance perspective, the main issue with the current route to Paintbrush Divide is that the final push up to the 10,720-foot highpoint cuts across steep scree slopes and boulder fields that experience a whole lot of erosion. That’s especially true during the winter melt, but it happens all year and was readily apparent last week: Over the course of a couple hours the sight and sounds of rockfall interrupted an otherwise mostly still afternoon on several occasions. The landscape high in the Tetons in a place like Paintbrush Divide — including the trail itself — is always redefining itself.

“There’s just watermelon-sized boulders all over the trail,” Matt Noble, a Teton park trail crew leader, said at the site. “A lot of the walls start to fail. It’s totally navigable for the avid hiker, but we get a lot of traffic up here of all different kinds, and it’s pretty tough for some folks.”

And those users are multiplying nowadays.

“Anecdotally, it is twice as busy as I’ve ever seen,” Noble said. “For sure.”

While Noble spoke his crew wielded McLeod rakes and pickaxes to “scratch” and “retread” the 45-mile-long Teton Crest Trail where it cuts across the one of most dynamic slopes along its route. Because the bedrock was buried under feet of scree and loose rocks, it wasn’t practical to dig in and anchor the trial via stone walls, drainage infrastructure and other standard trail features.

Adding Paintbrush Divide to the list of annual trail locations that need maintenance is doable, but it’s not ideal. And so Foster, Noble and other Park Service staffers are endeavoring to come up with a longer-term fix for the Teton Crest Trail’s crux, although the solution isn’t obvious.

Fortunately, some funds have been made available via the Grand Teton National Park Foundation to help with the task. This year the nonprofit booster organization devoted to its namesake park chipped in some $150,000 to help fortify Paintbrush Divide, plan for its future and also to rebuild trail structures and add drainage to the Crest Trail through Cascade Canyon’s South Fork.

“We grant funds to the park directly, and it really helps the managers prioritize some of these projects,” foundation Vice President Mark Berry said. “Otherwise they have pretty limited funding for the trail crew, and it’s base funding for people that’s competing with everything else in the park.”

Berry, like the park’s trail staffers, was perplexed about what a built-to-last trail looks like on a scree slope that sees the same snowfall and weathering as the Tetons’ high peaks.

“What could be more sustainable?” he said. “We need a crossing up here for the Teton Crest Trail. Is this the best location? I think that’s awesome that they’re thinking about it.”

There is an alternative, now-faded route up to the Paintbrush Divide summit that dates to the days when the Teton Crest Trail was known as the Skyline Trail (and before that, it was the Divide Trail).

Walking along the old alignment last week, Berry and Noble were impressed with how well some of the construction has held up. The handiwork they admired was put in by the Civilian Conservation Corps in 1934, according to a Park Service press release.

But the trail was also moved in the 1960s for a reason, Foster said. The CCC-alignment, located just to the south, switchbacks up nearer to exposed bedrock and rock walls where a trail can have more permanence, but it’s also on an aspect of the mountain that tends to hold much more snow. Go take a look on Google Maps’ satellite imagery: On the trail to the divide the scree is wind-scoured, but the gully just south — where the old trail treads — is filled with snow.

After the big winter of 2016-17, the CCC-aligned trail never even melted out.

“I went up there in September, and was like, ‘This is why we don’t do this,’ ” Foster said. “If we redesignated it … and people tried to down-climb it, it would be a smear-fest. Off the books.”

Paintbrush Divide is a problem area in the early season for people who approach the Teton Crest Trail as a hike and not a mountaineering experience. The classic accident is a slip on the snow without an ice ax. Unwanted rides down the slick slope typically come to an injurious ending where the snow runs out and rocks begin.

If they revert the trail to the old alignment, where there’s even more snow, and there’d be potential for those slips and falls to become more frequent. Then again, the current alignment isn’t working perfectly, either. It’s just a tough spot for an increasingly popular trail in the Tetons.

“That’s the reason you’re here, trying to get over there,” Berry said. “There’s not a lot of options.”

“The Paintbrush-Cascade loop is one of the crown jewels and the big hikes in the Tetons,” he said. “And this is where they put it.”