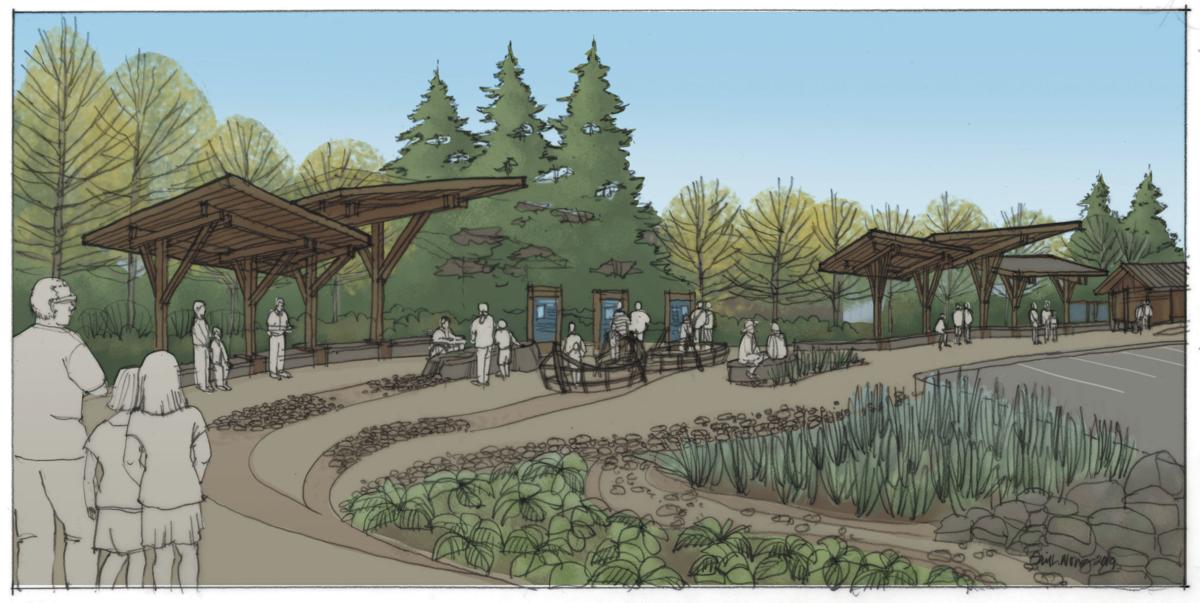 Visitors waiting for their scenic river floats trips spend a lot of time waiting at the busy landing site at Moose. The project would create a more sheltered waiting area to accommodate visitors, rain or shine. 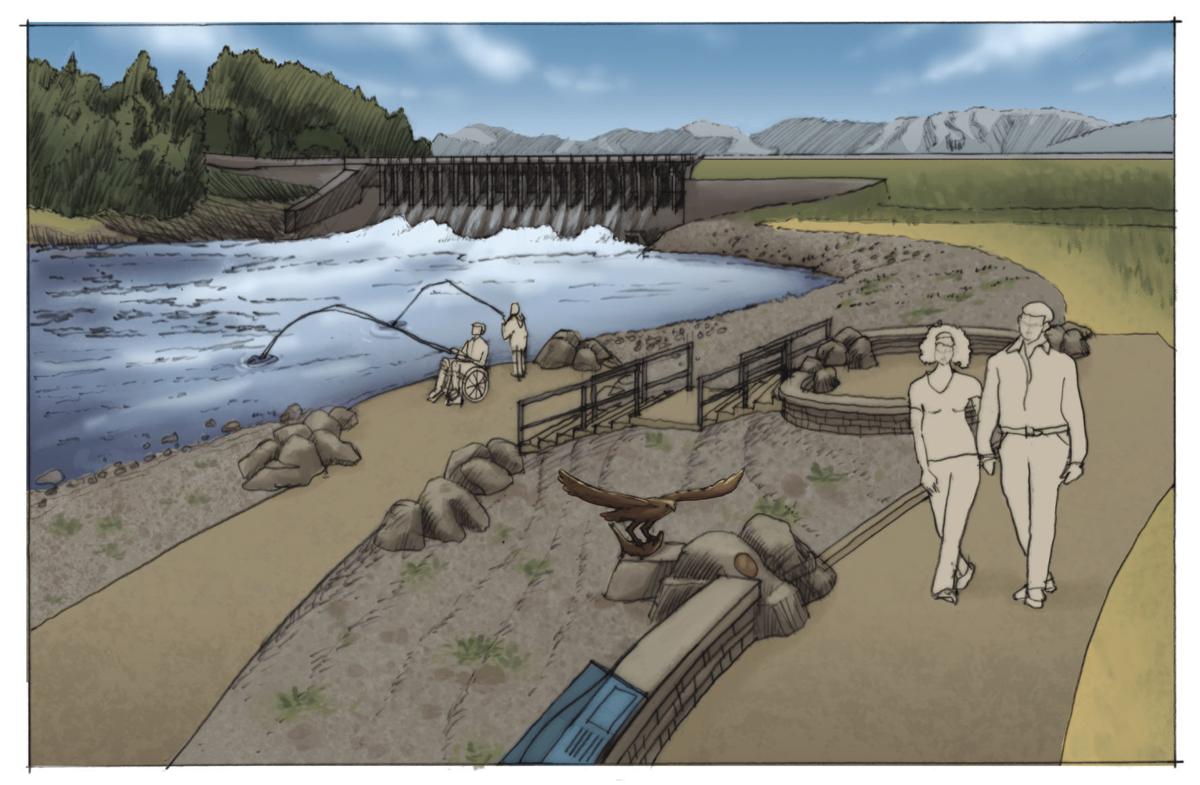 Increasing accessibility is a major goal for the Jackson Lake dam site, slated for renovation in 2022. The plan includes the construction of a boat ramp and the replacement of the parking area closest to the river with an interpretive plaza and overlook. 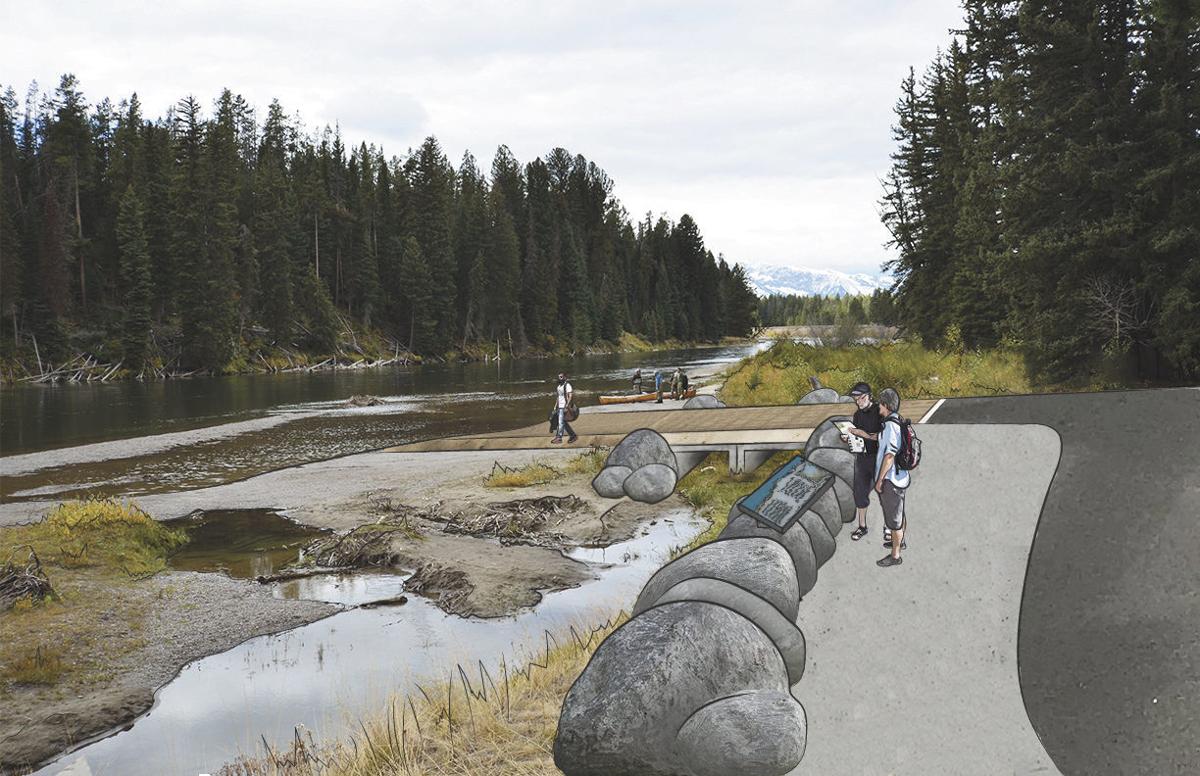 Construction is scheduled to begin at the Pacific Creek landing site in 2020. A new ramp, retaining wall and overlook will be added to the site to increase accessibility and improve the visitor experience.

Andy Westbrook steers a boatload of Solitude Float Trips clients toward the rocky, unimproved landing stretch at Moose. A public-private partnership between Grand Teton National Park and its namesake foundation aims to improve the launches and landings at Jackson Lake Dam, Pacific Creek and Moose.

The launching facilities along the Snake River in Grand Teton National Park have seen better days.

Reynolds Pomeroy, a boatman for Barker-Ewing Scenic Float Trips, has observed that firsthand.

“In the past decade or two it’s gotten noticeably worse,” he said. “You go to rivers elsewhere in the region, and ramps are almost always much better than we have here on the Snake.”

The Snake River Gateways campaign, a renovation project of the national park and its nonprofit partner the Grand Teton National Park Foundation, will invest over $8 million to create safer, more accessible facilities along the river and address environmental damage. The project will target three locations: the Moose, Pacific Creek and Jackson Lake dam launches and landings.

For Pomeroy the changes are long overdue.

“I think particularly the Moose landing site is unsafe,” he said. “As a boatman — and I don’t want to overstate it — I spend much time cautioning my passengers to be careful when they disembark there because of the conditions. I’m worried more about their safety there than almost anywhere else.”

Planners have been listening to those concerns. Two of the project’s priorities are increasing safety and accessibility.

“Throughout the National Park Service, as we are implementing projects like this, of any scale, we’re trying to make sure that they fully meet the intent of the Americans with Disabilities Act and the Architectural Barriers Act,” said Chris Finlay, chief of facility management for the park.

The environmental study of the construction area was completed in 2014 when the Snake River Headwaters Comprehensive Management Plan wrapped up. The same planning process authorized the 2016 overhaul of the Deadman’s Bar access, which was enlarged and had its entrance road widened.

This partnership with the foundation also allowed the park to look past the maintenance backlog it’s constantly trying to keep up with and to dream a little bigger.

Finlay said that in this planning stage they have taken a holistic approach that tackles not only safety and accessibility but also education — through increased interpretive materials focusing on historical and environmental context — as well as shoreline habitat restoration, added capacity and an improved visitor experience.

“The population is increasing, and the popularity of the parks is increasing,” Finlay said. “We want to provide access to visitors who want to visit these wonderful places in ways that are conducive to not only a positive, safe visitor experience, but also protecting and learning about park resources.”

“At each of these three sites there would be a variety of exhibits and information that would really bring the river experience to life for people,” Berry said.

Interpretive materials would focus on themes such as wildlife, the history of rafting on the Snake River and the significance of legislation like the Wild and Scenic Rivers Act.

This year the campaign was in its design and planning stage. The projected timeline is to start construction with the Pacific Creek landing in 2020, the Moose landing in 2021 and Jackson Lake dam in 2022.

The biggest challenge at the Pacific Creek site is how to create a ramp that is compatible with the amount of sediment in this section of the river and the sandbar that comes to the surface seasonally.

Currently the ramp is a bit improvised — it combines used aircraft matting and corrugated metal culverts to provide a firm, stable surface from which boats can launch. The park worked with recommendations from hydrologists to create a ramp design that is functional and works with the natural environment rather than in opposition to it.

The rebar and railroad tie retaining wall will also be rebuilt, and an overlook with educational material will be added to the site.

Additionally, the Pacific Creek launch site parking area will be revamped. The entrances will be consolidated, the one-way road will be turned into a loop, lot stripes will be repainted to create pull-through spots, and clearer signage will be installed. Another restroom will be installed on the north side of the park road to service nonriver users who enter through the Moran gate.

At the Moose landing, many visitors waiting for their scenic float trips to depart are confronted with the distracting site of the park headquarters and a paved road. The plan aims to add more vegetation and interpretive materials to lessen what is now the site’s somewhat industrial feel.

But the Moose site also presents a safety concern, because the facilities can be tricky to navigate, even for those experienced on the river.

The plan calls for the construction of a wider, more accessible ramp along the channelized, fast-moving stretch of the river just east of the park’s headquarters building.

The retaining wall would be redesigned to create an improved eddy for the ramp, and the boat pullouts would be secured with terracing, natural bank protection, including vegetation, and improved delineation of use and trail areas to reduce erosion.

The northern part of the paved road parallel to the river will be turned into a trail, which will improve the experience of park visitors and help restore wildlife habitat along the riverbank.

At Jackson Lake dam there is no ramp in place at all. Those launching use a DIY approach, backing their trucks down the gravel riverbank and skidding their boats down the uneven surface.

The plans in place would call for the construction of a new hardened ramp at the far eastern end of the launch site. On the south side of the river, the parking area closest to the dam would be replaced with a plaza with interpretive materials for visitors and an overlook, and parking would be consolidated in the upper lot adjacent to Jackson Lake. The plan would also clean up lakeside paths leading to a viewpoint.

The kickoff of the Snake River Gateways campaign coincides with the 10th anniversary of the Craig Thomas Snake River Headwaters Legacy Act. In 2009 the U.S. Congress passed the legislation to protect 414 miles of the Snake River and its tributaries above Palisades Reservoir.

Last year was also the 50th anniversary of the Wild and Scenic Rivers Act, a landmark law dedicated to protecting the wild, scenic and recreational qualities of designated waterways.

Pomeroy, for one, is happy that this project is finally underway. Though some things have changed since he first floated the river in the early 1970s, he believes the majesty of the experience has remained essentially the same.

“The wildlife is intact, the mountains are beautiful as ever,” he said. “Depending on what time of year or what time on a day you float you may see more traffic, but the experience is still world class. So having those manmade facilities upgraded, both for safety and ease of operations, is great.

“I know budgets are tight, but this has been overdue. It’s a welcome improvement.”

If we are supposed to protect the Snake, then let's protect it. Wider roads, man-made retaining walls and visitor centers does not seem to be the sort of protection I was thinking of. Commercial outfitters need reeled in and a limit of no more than a dozen or so rafts per hour needs imposed. What's next? Jet boat tours and a drive up McDonalds along the banks. Send this back for review. A review from 5 years ago is not valid. Newly released reviews in the oil and gas industry are sent back for any little thing environmentalists can think of. Where are they now with this kind of expansion wanted on the Snake River?