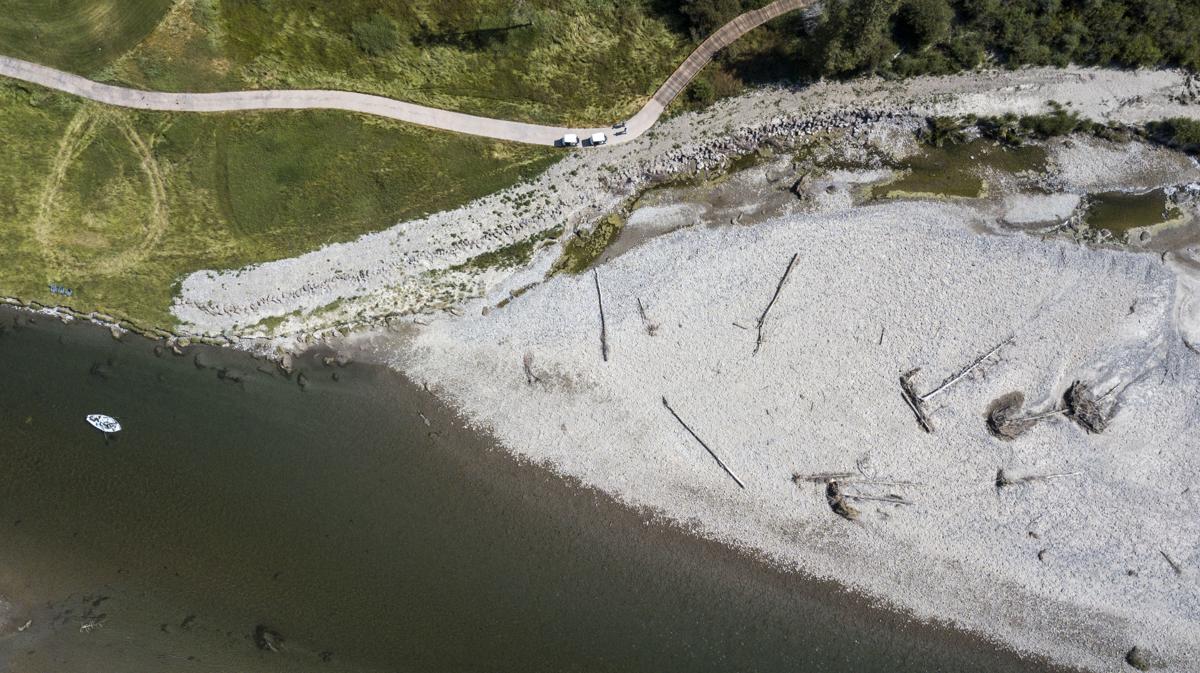 The Snake River has cut into the bank along a golf cart path at the Snake River Sporting Club, exposing a string of rock and boulders placed to prevent damage to the golf course and its neighboring house and condominium development. 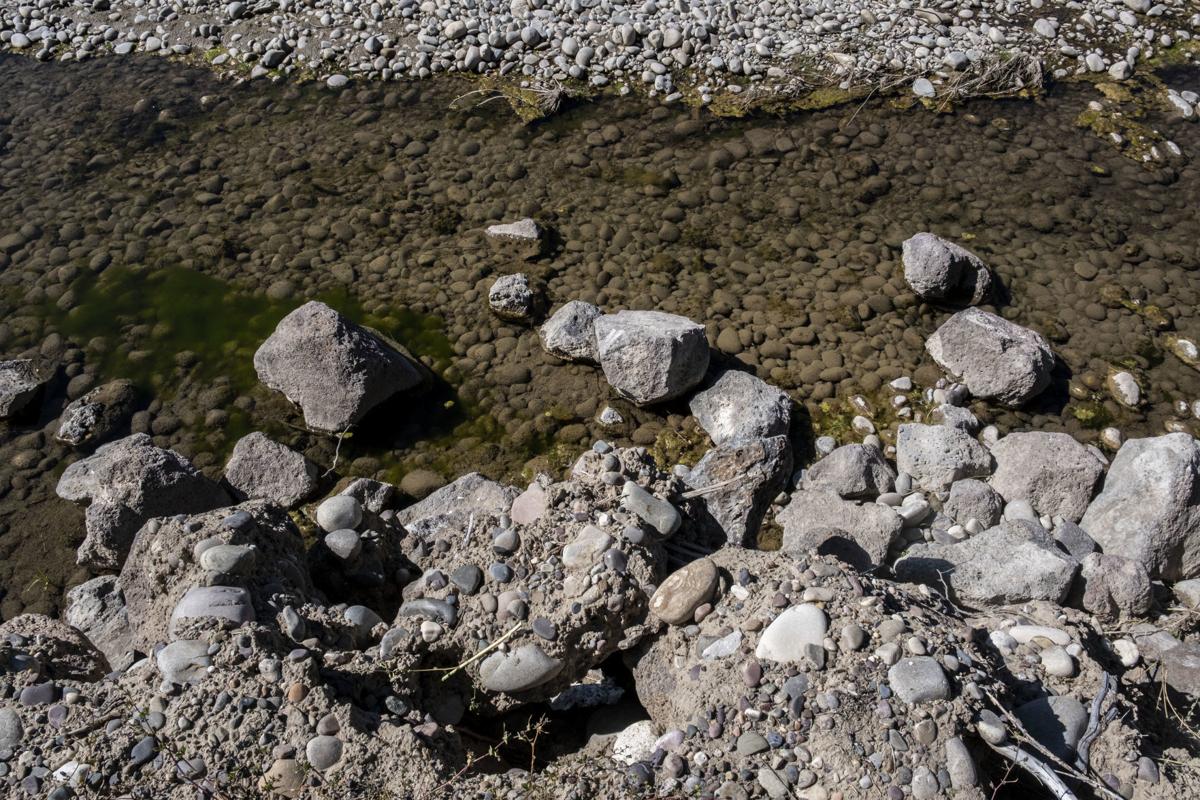 A late-August 2019 view of the Snake River Sporting Club’s riprap levee shows large boulders fallen into the riverbed. The boulders were placed inland from the channel in November 2017 in an effort to protect the club’s golf course. 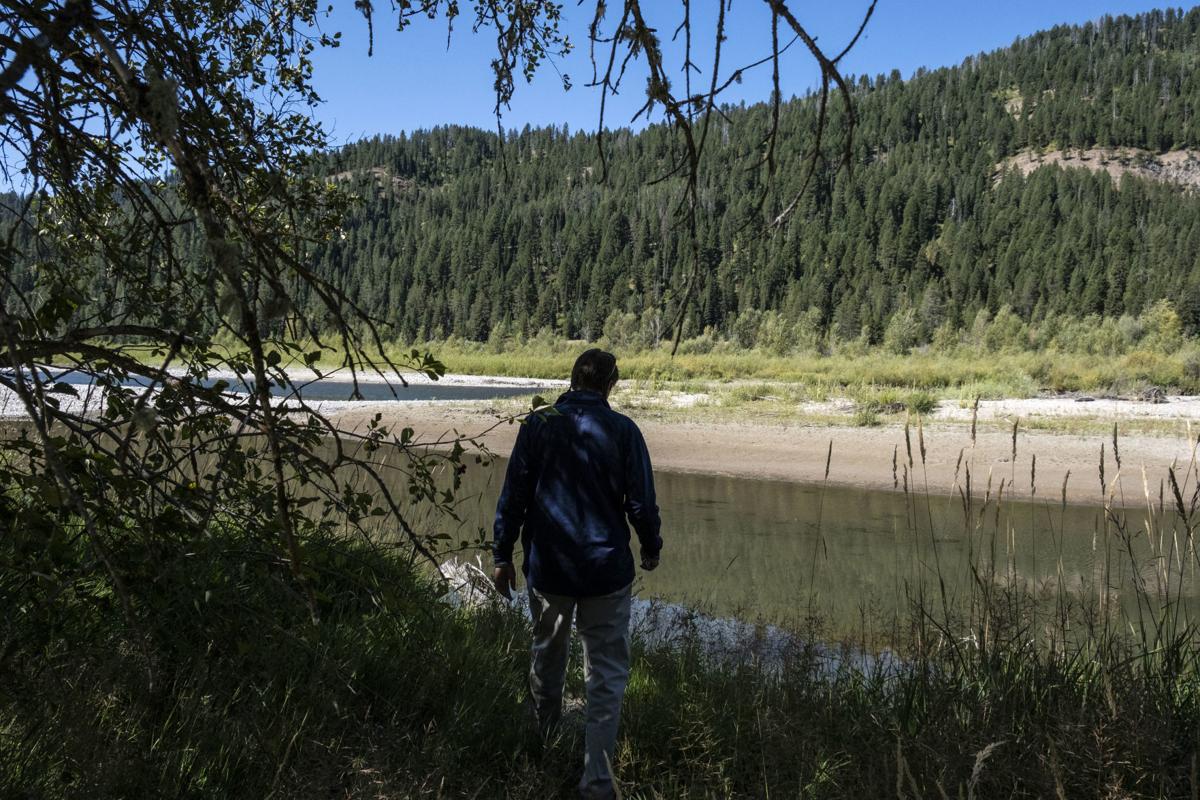 Snake River Sporting Club owner Christopher Swann walks to the bank of the Snake River below the club’s riprap levee in late August.

For months this year, developer Christopher Swann held out hope that he could hold back the Snake River’s raging springtime flows using strategically placed boulders covered in topsoil and willow saplings.

“This was always supposed to be our fail-safe,” the Snake River Sporting Club owner said in late August from the riverbank near his golf course’s 15th hole.

Beneath where he stood were love seat-size boulders that had been buried as much as 40 feet inland two winters before. But, scoured free by the raging river, many were now toppled over, resting along the cobble of the riverbed some 20 miles upstream of Palisades Reservoir.

Although conceptually approved by county planners years ago, that so-called “boulder trench,” meant to stabilize the eroding shoreline, had not been permitted. When Teton County planners and engineers learned of it in 2018 and investigated, they detected a long list of violations — including berms, stockpiles, filled-in river braids, a bridge and a pickleball court. Ultimately, Swann and the club restored almost everything to its former condition. Even the pickleball court was torn up and its footprint reseeded.

But the boulders, which were shielding a golf cart path, hole and upscale homes built within the Snake River’s floodplain, were an exception. The exclusive country club was allowed to temporarily keep the approximately 300-foot riprap levee. Swann was instead instructed to work with the Bridger-Teton National Forest and U.S. Army Corps of Engineers to come up with a long-term solution that would allow the Sporting Club to coexist alongside the federally protected river, which in the canyon is designated as “recreational” under the Wild and Scenic Rivers Act.

That’s a challenge when the task is to fend off a dynamic river like the Snake that will migrate where it will, and with force. During a typical early summer peak flow in the canyon, the Snake is moving about an Olympic swimming pool of water every three seconds.

Swann and his contractor, Jorgensen Engineering, tried to make do with a modified version of the boulder trench but were rebuffed by the county. The Sporting Club’s new conceptual plan for preventing erosion calls for taking the “root balls” of mature trees and even entire native trees themselves, like cottonwoods, and anchoring them in the bank so that it appears natural and is structurally stable.

“It will need to be maintained because they’re organic,” Jorgensen CEO and Principal Engineer Reed Armijo said. “It’s not concrete and steel, for good reason. ... You can use rock, and we will be using rock, but you just can’t armor the bank.”

At this juncture Jorgensen is doing the heavy lifting and, through its contractors, navigating the permitting processes. It’s drawing up designs and making sure everybody — the county, the U.S. Forest Service and Army Corps — is “nodding heads” as they move forward, Armijo said.

While the design will be tailored to the site, the project can lean on other case studies that show what constitutes compliance with the Wild and Scenic Rivers Act.

The 51-year-old act, sort of a flowing-waters counterpart to the Wilderness Act, contains a provision, Section 7, that protects the “free-flowing” condition of all designated rivers. The act doesn’t prohibit bank stabilization, but if the work involves a federal agency it triggers a review to ensure that the manipulations don’t compromise the river’s “outstandingly remarkable” values.

Steve Chesterton, who heads the Wild and Scenic program for the Forest Service, said stabilization projects on the approximately 12,700 miles designated under the 1968 Act happen with some regularity. Chesterton wouldn’t comment on the Sporting Club’s situation, deferring to the Bridger-Teton and pointing instead to three case studies posted to the Forest Service’s website. The examples detailed satisfactory efforts to hold back Oregon’s Upper Deschutes and Imnaha rivers where they flow through private land, and another project completed by the National Park Service along Ohio’s Little Miami River.

The Upper Deschutes project, which dates to the late ’90s and early 2000s, has many similarities to the Sporting Club, down to the length of riverbank that was altered without authorization. In that case one of the landowners, Al Mills, stabilized his bank by building an “elaborate stairway, wood terrace and dock” without permits and in violation of state, county and federal regulations.

To remedy the situation that infrastructure was deconstructed. In its place Mills and two other landowners held back the “recreational” stretch of the Upper Deschutes using 60- to 75-foot-long trees, native vegetation and a floating dock. The design called for rushes, sedges and cattails nearest the water along with willow bundles and fiber mats. More upland, there were “containerized” ponderosas, lodgepole pines and quaking aspens as well as bitterbrush and rose plants.

“Implementation of the project provides a net effect of protecting and enhancing river values by restoring natural characteristics of the river, and improving water quality,” Forest Service Regional Forester Harv Forsgren wrote when he authorized the Deschutes River Restoration Plan in 2000. “The impacts to the free-flowing condition are minimized to the extent practical.”

It’s been a long row to hoe, and Swann has grown frustrated with bureaucracy at a short-staffed county planning department that has suffered incredible turnover.

Swann initially didn’t want to go the route of securing federal permits. In August he cited costs and the lengthy process as the reasons. His preferred course of action, endorsed at the time by Jorgensen, was to reposition the boulders and bury them with dirt. But those plans didn’t fly with Teton County regulators.

“While we are anxious to remedy the situation, County Engineering staff cannot permit simply covering up the existing violation with topsoil and willow plantings,” Teton County Engineer Amy Ramage wrote to Swann in July.

In September, Swann changed course. He wrote in an email copied to his engineers, the Bridger-Teton National Forest and Teton County that it was “probable” he’d go the route of securing federal permits from the U.S. Army Corps of Engineers and Forest Service. His plans had pivoted to a design that would use “toe wood” and natural vegetation.

In the meantime an independent determination of the “ordinary high water mark” where the Snake River cuts along the Sporting Club’s western boundary affirmed the need for federal permitting. Biota Research and Consulting fluvial geomorphologist Ryan Colyer wrote in a memo that the top 2 feet of the boulders Swann’s excavators placed in the ground were above the high water mark. But another 5 feet of the boulders sat beneath the mark. Tinkering below that line necessitates Army Corps approval, which in turn triggers a Wild and Scenic review.

Swann and Jorgensen have now embarked on the process of getting those federal government OKs.

“I’ve been trying to find the most expedient path,” Swann said. “I think that there’s kind of been the perception that we’ve been trying to skip processes, and that’s definitely not the case. We were always trying to resolve the issue.”

Bridger-Teton Jackson District Ranger Mary Moore said Wild and Scenic reviews can take as little as a month but as long as 12 weeks.

“Unfortunately, it’s a process that’s going to take time,” Armijo said, “but we’ve been working pretty hard on it.”

Still, some environmental watchdogs who have kept an eye on the Sporting Club aren’t pleased that any riverbank stabilization work at all is likely to be authorized.

“Even if Mr. Swann proposes a design that complies with the Wild and Scenic Rivers Act, it doesn’t necessarily comply with the development permit,” American Rivers Northern Rockies Director Scott Bosse said. “That’s the bind he’s in. There’s a conundrum.”

When its predecessor, the Canyon Club, was approved in 2003, commissioners voted to attach 76 conditions to the final development permit. Those stipulations, predating the Snake’s Wild and Scenic designation in 2009, prohibited dikes, levees and retaining walls. Bank stabilization can be allowed, according to the development conditions, but only if authorized ahead of time by the government entity with jurisdiction.

“I personally think that area should be restored to the way it was before it was altered,” Bosse said, “and then close the book on it.”

But the Sporting Club’s new approach has cheered other activists following the issue. Snake River Fund Executive Director Jared Baecker had grown frustrated with inaction at the site by late summer.

“It’s been a year and another cycle of high water has come and gone, and the boulder trench has now calved into the river, and we would like to learn of the plans moving forward,” Baecker said at the time. “With every nail that’s pounded into a new building at this point, we see a greater opportunity for our elected officials to fail to uphold the development permit that was agreed to.”

But Baecker has been more optimistic recently with the club starting to embrace a process meant to ensure that the Snake retains its remarkable values. In the Snake River canyon, according to its Wild and Scenic management plans, those are “recreation,” “scenery” and “wildlife.”