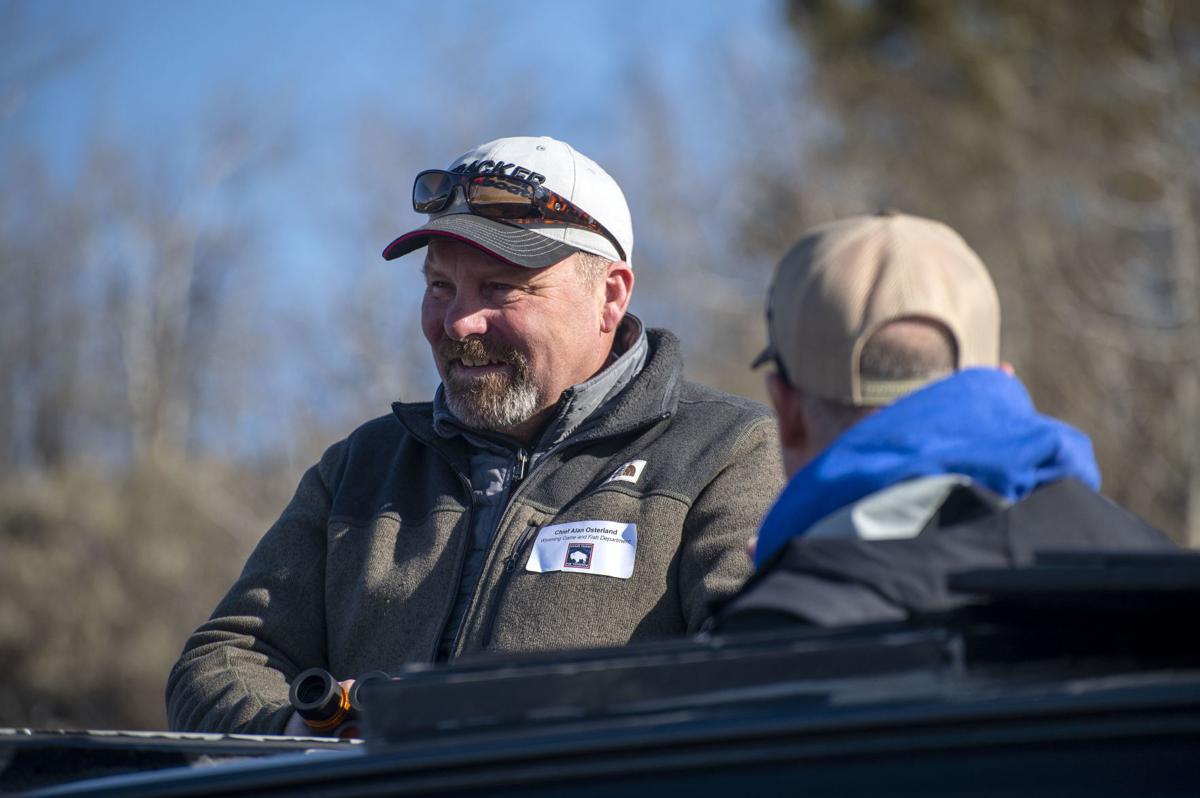 Wyoming Game and Fish Chief of Fisheries Alan Osterland chats with other attendees of a wildlife tour with Game and Fish commissioners April 20 in Grand Teton National Park. 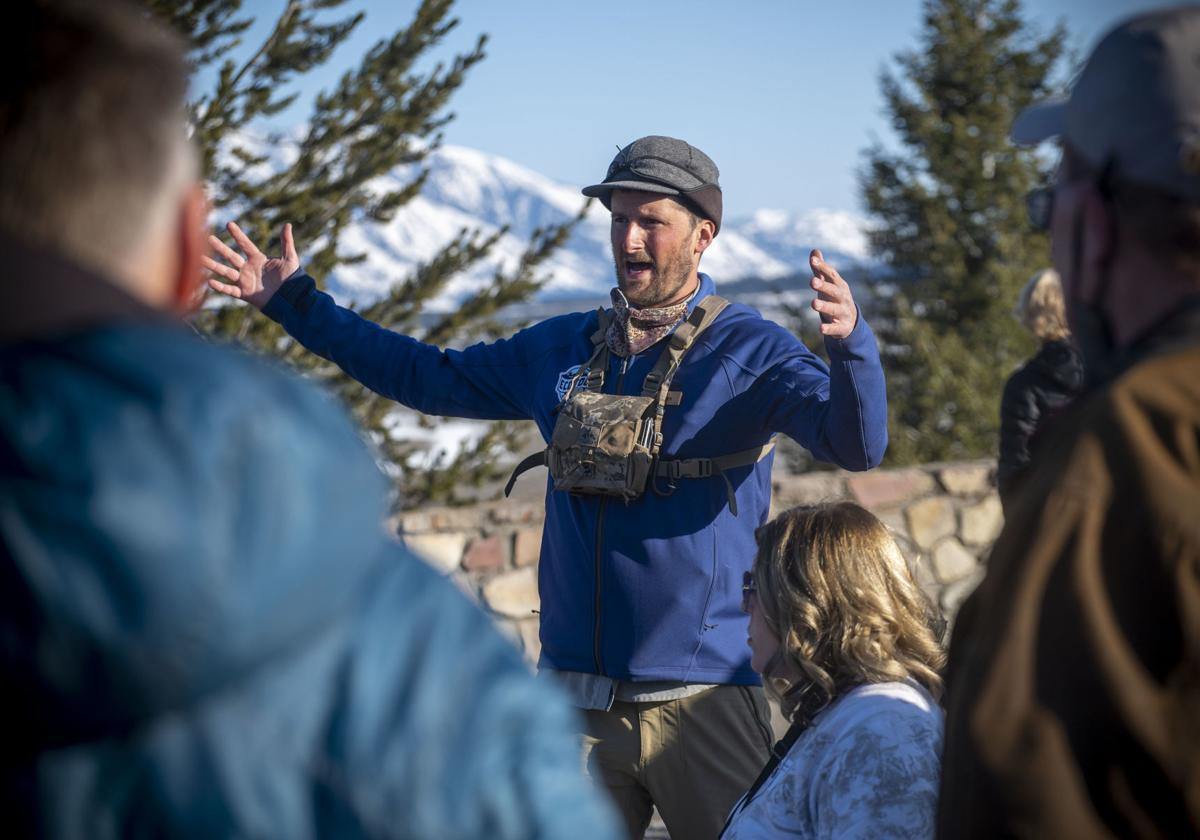 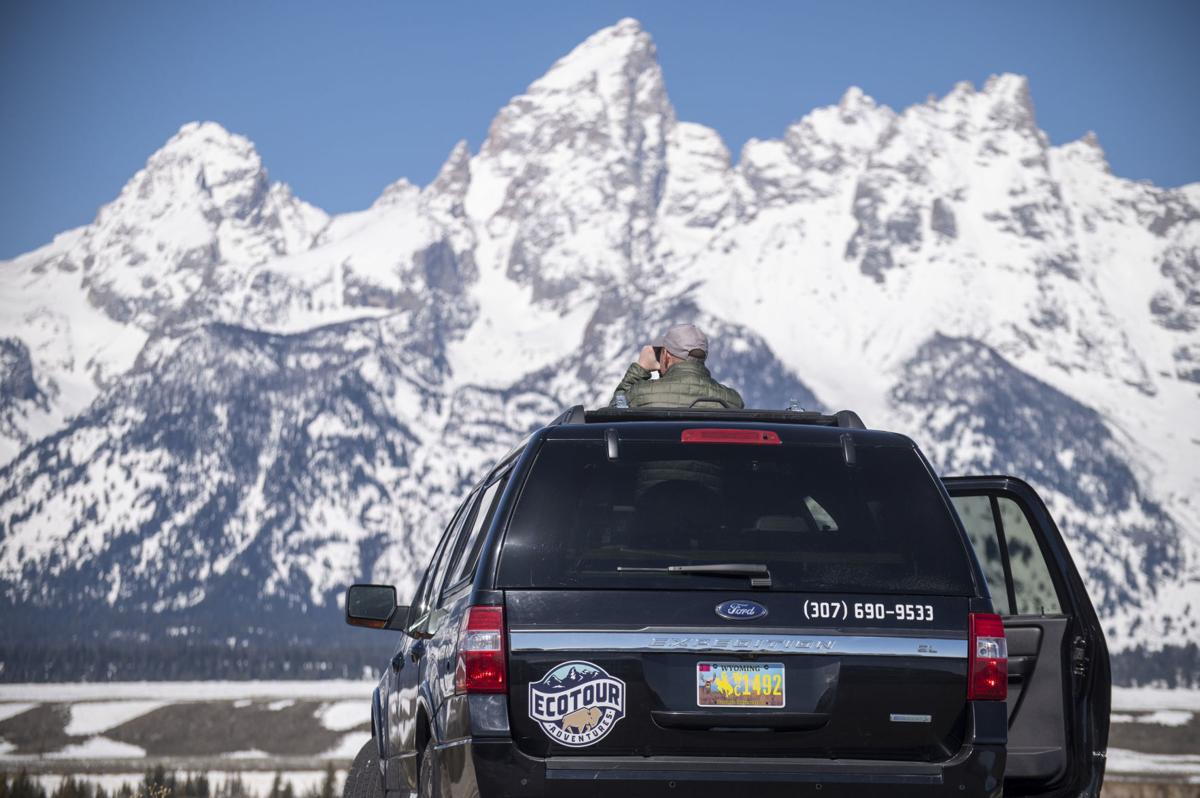 Chris McBarnes, president of the WYldlife Fund, scans the landscape on April 20 during a wildlife tour with the Wyoming Game and Fish Commission and other state wildlife stakeholders in Grand Teton National Park . 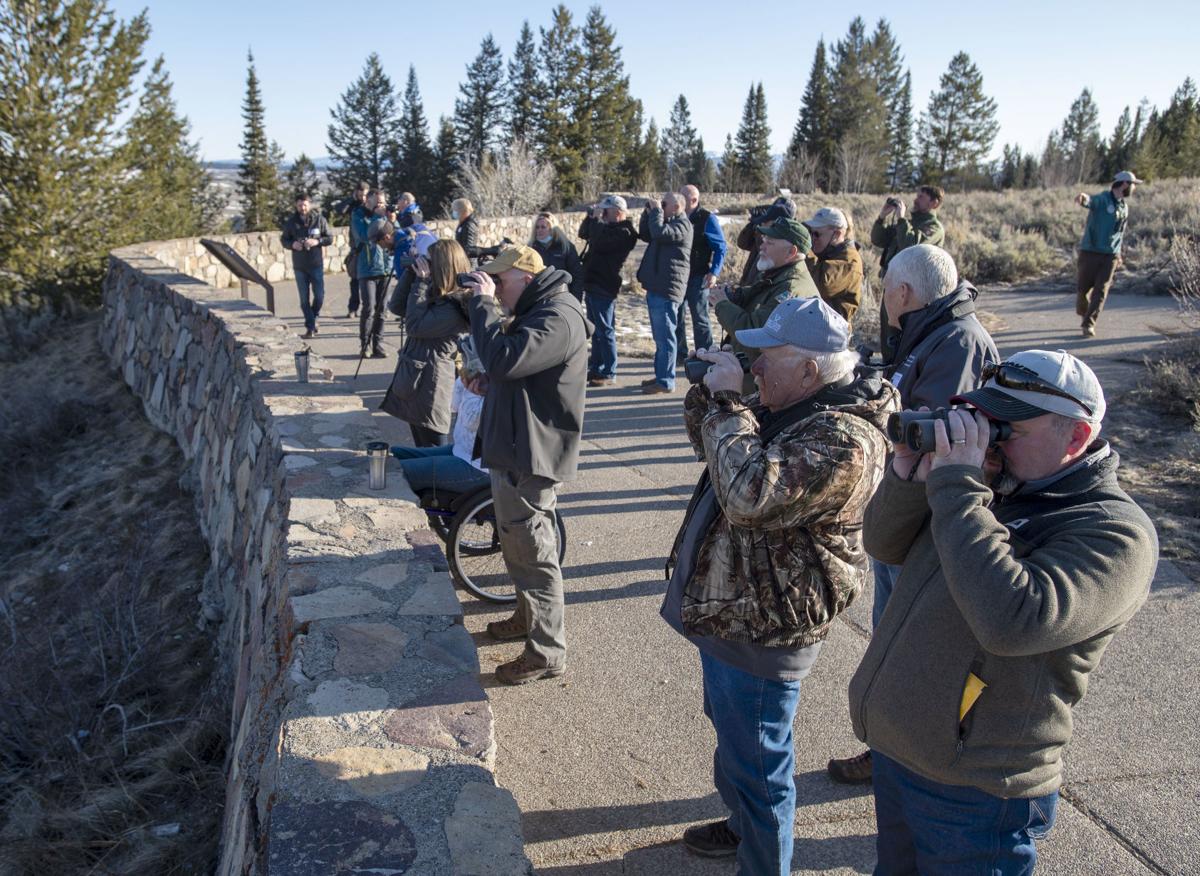 Wyoming Game and Fish commissioners and other state wildlife stakeholders watch wolves stalk a herd of elk from the Snake River Overlook during an April 20 tour in Grand Teton National Park.

Gay Lynn Byrd couldn’t quite recall the last time she’d laid eyes on the Tetons, but her best guess was that it had been nearly 30 years.

Hailing from Douglas, the Wyoming Game and Fish commissioner was certain of something else: She’d never seen a wild wolf.

“We ranch, so we see livestock and wildlife all the time, but just to see it with the Tetons is great,” Byrd said. “This was the first time I’d seen a wolf in the wild.

“Now we just have the keep them up here,” the 60-year-old added, “because we don’t want them.”

The Converse County denizen’s long-distance look at a Grand Teton National Park wolf pack had come just minutes before while out on a wildlife-viewing safari led by Eco Tour Adventures. First spotted by another commissioner, the wolves were headed south on a bench across the Snake River. They were visible through good optics all the way from the highway-side Snake River Overlook. A group of elk, meanwhile, was bunched up down in the river bottoms about 150 yards away, well aware of the canine carnivores passing by.

“Their heads were up, looking in the direction of the wolves,” Eco Tour owner and founder Taylor Phillips recalled. “It was pretty incredible.”

The predator-prey interaction was a highlight of the April 20 morning-long tour, which exposed the seven-person Wyoming Game and Fish Commission and the department’s Cheyenne-based leadership to a vibrant wildlife tourism industry in Jackson Hole. The wildlife tour business extends beyond the hunters and anglers who represent the state agency’s bread-and-butter constituency.

At the same time, Phillips was using the tour to launch and promote a new initiative he conceived to funnel a new source of revenue toward conserving Wyoming’s wildlife. The initiative, called Wildlife Tourism for Tomorrow, allows businesses and their clients to donate a dollar sum or a predetermined percentage of their revenue toward specific projects, like the planned wildlife underpasses along Highway 189 near Dry Piney Creek. A new foundation that partners with Game and Fish, the WYldlife Fund, serves as the intermediary, making the contributions eligible as a charitable donation. The point, Phillips told commissioners ahead of the tour, is to provide a way for private businesses to invest in wildlife.

“If it wasn’t for wildlife, I wouldn’t have a job and this hotel likely wouldn’t be here,” Phillips said from outside the entrance of the Lodge at Jackson Hole. “It’s time for these entities to give back.”

Already there’s some buy in.

Besides Phillips’ Eco Tours, Buffalo Roam Tours and Team 399, which leads photography safaris, have also pledged a portion of their revenue. Four hotels are in as well, the Elk Country Inn, Cowboy Village Resort, Antler Inn and 49er Inn and Suites. Just on Tuesday the fly-fishing guide service Fish The Fly signed on and committed 1% of its sales.

“This is the first time I’d seen a wolf in the wild. Now we just have to keep them up here.” — Gay Lynn Byrd, Wyoming Game and Fish Commissioner

The Game and Fish Commission and the state employees they oversee are taking to the idea with open arms. Game and Fish, like many states’ wildlife management agencies, has long struggled to find a mechanism to extract money from people who don’t hunt and fish.

Wildlife Tourism for Tomorrow, Game and Fish Director Brian Nesvik added, could “absolutely” be a step towards fulfilling agency needs using funds that aren’t from license dollars and excise taxes on ammunition and fishing tackle.

“Where there’s a need for funding is on these projects, that’s where we don’t have capacity,” Nesvik said. “Just for example, we’d really like to build overpasses over Interstate 80 at the key crossings. We’re talking $30 million, and we don’t have the capacity to do that, but something like this could help generate revenue.”

The Teton park tour and Phillips’ fledgling initiative can also be construed as a proverbial olive branch aimed at uniting two camps: so-called non-consumptive (like photographers) and consumptive (hunters and anglers) wildlife users. While those groups aren’t always aligned when it comes to Game and Fish policy, there’s plenty of overlap between the two and a shared common goal to support and conserve wildlife.

Greater Yellowstone Coalition wildlife program coordinator Chris Colligan was among those in attendance last week who felt good about inroads made and insights gained.

“It really was an opportunity to share with the wildlife decision-makers of the state the experiences that draw millions of visitors here annually,” Colligan said. “The vast majority of those people who come here to visit and enjoy wildlife don’t buy hunting and fishing licenses, and so they’re a constituent who goes unnoticed for the department.”

Wyoming Untrapped founder Lisa Robertson is another local who’s all about uniting non-traditional bedfellows in the wildlife world. She hopes to spend her own dollars on a project that’s being considered by the WYldlife Fund, just because it’s something she cares about. She’s also enthusiastic that the initiative gives visitors a way to chip in.

“I love the whole concept,” Robertson said. “Let’s do this now.”