A campsite near the Gros Ventre Wedding Tree looks out over the Tetons. The Bridger-Teton National Forest has closed the area to camping as part of a cleanup to mitigate increased demand in the lower Gros Ventre Mountains. The Curtis Canyon, Spread Creek and Toppings Lake areas were affected as well.

Rebecca Zalewski was camping near the Gros Ventre “Wedding Tree” the last Saturday in May when rangers approached her and her friends to tell them that camping was no longer allowed at the overlook where campers, photographers, brides and grooms all gather to bathe in views of the Tetons.

“It’s a bummer,” she said, fire crackling behind her. “I really just found out about this.”

Zalewski has lived in Jackson for about 20 years. Though she’d known of the Wedding Tree, mostly from people being married beneath its branches, that was her first time camping there.

Linda Merigliano, recreation program manager for the Jackson District of the Bridger-Teton National Forest, said closing the area to camping will reduce conflict between overnight recreationists and daytime-only users like photographers and wedding parties.

“[If] you’ve got a person who is trying to hold a wedding and there’s a bunch of tents set up,” she said, “it doesn’t mix very well.”

The area had also been messy, Merigliano said. On June 2 a ranger found toilet paper piles and a campfire left smoldering at the site. Some people had years earlier contacted the Forest Service asking to make it day-use-only so they wouldn’t be “tripping over people’s campsites.”

The Bridger-Teton decided to do that in October 2018 after a review of campsites and forest roads in which a Wedding Tree camping ban was just one of the decisions made.

Requiring people to use designated parking areas rather than driving 300 feet off designated roads to camp in areas like Shadow Mountain was part of the package. So was cutting off camping at the Curtis Canyon overlook, removing permanent grills at the Cache Creek Trailhead and reducing the time camping was allowed in the Spread Creek and Toppings Lake area from 16 days to five.

Merigliano said all of those decisions are intended to improve management of rapidly increasing demand for camping in the lower Gros Ventre area.

“One of our mantras is the right use, in the right location, at the right time, and it can’t be every use in every location,” she said. “It’s a balance, and there’s never an exact right answer.”

The campers at Wedding Tree questioned whether banning overnight use was the most effective way to remedy the situation.

“If there’s an issue with littering and people not taking care of their, you know, personal hygiene, then perhaps there should be some education about how to camp,” Angela Tong said.

Since Wedding Tree sites are already established, there were three fire rings on the knoll. Tong wondered whether closing the area to campers might cause people to spread out to other undeveloped areas, increasing the harm to the forest.

Merigliano acknowledged that an alternative would have been to keep one of those sites open as a designated camping area, but said that wasn’t considered. 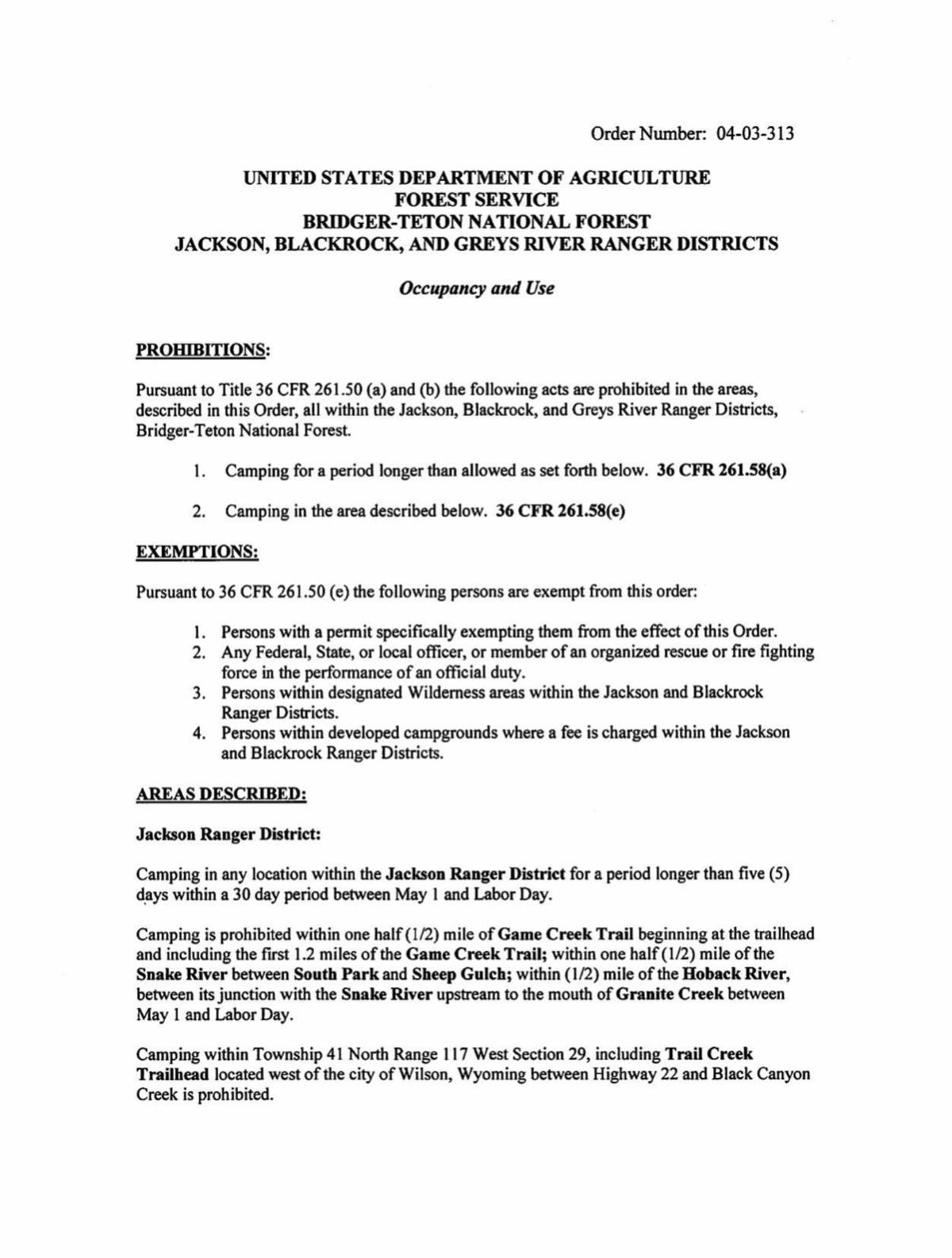 “There’s just so much other camping in the immediate area,” she said, pointing to Shadow Mountain and Curtis Canyon, where staying in the campground is still allowed. “It would be hard to try to manage just having one group there and still allow everybody to have day use.”

The 2018 decision has been phased in. Signs were recently posted notifying people at Wedding Tree. Other changes — the designated site system at Shadow, which also applies to Curtis and the Spread Creek and Toppings Lake area — were introduced in 2019. More will be in the future, including a similar parking system for Lower Gros Ventre Road and lower Flat Creek Road.

Breaking the rules could land people with a $5,000 fine or up to six months in jail, but there likely won’t be a widespread crackdown.

“We’re not really going to increase enforcement tremendously,” Merigliano said, adding that officers would, however, be patrolling the sites.

The campers were worried social media has driven people to spots like Wedding Tree that visitors wouldn’t otherwise find. Merigliano said that’s been a reality.

Pointing to their fire ring, Jake Layton, a valley photographer in Tong and Zalewski’s group, said he’s seen influencers with 300,000 followers “flying their drones over this fire and out towards the Tetons.”

In contrast, he said, Wedding Tree “is a spot that I kind of found a little bit through just being local. It wasn’t, like, easy to figure out.”

Because the forest hadn’t put up signs yet prohibiting overnight use, Layton was able to make figuring it out worth it.

The rangers allowed him, Tong and Zalewski to stay, enjoy the sunset — and grab a few pictures — while camping at Wedding Tree for the last time.

Another over loved place.