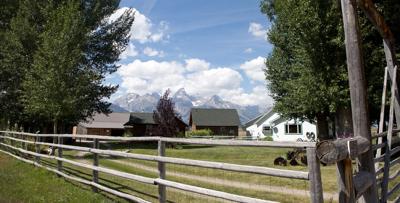 Grand Teton National Park will soon grow by an acre, but it could be the most important acre in park history.

Certainly the most vulnerable.

National Park Service officials, representatives of the Grand Teton National Park Foundation and citizens of the Hole gathered Friday afternoon at the last privately owned land on Mormon Row to announce that it will be purchased by the foundation and given to the park.

The acre, the final remnant of private land T.A. Moulton homesteaded in 1906, went on the market last year. It has been operated in recent years as a bed and breakfast by Moulton’s great-grandson, Hal Blake, and his wife, Iola. The Blakes decided to sell so they could retire and be closer to family in Idaho.

Blake was pleased the park will take over his ancestors’ homestead and preserve it — not just the structures but the history, too.

“It’s more than just keeping the buildings standing,” he said. “This is the story of homesteaders who were strong, resolute.

“It’s the last of our legacy here ... but it’s the best thing that could happen.”

His mother, Betty Moulton Gardner, was on hand for the announcement. Born in 1937, she grew up on the ranch and said she was sorry to see the end of the Moultons on Mormon Row but pleased the park will take over.

“I’m sad to see this all end, but I’m glad it’s turned out the way it has,” Gardner said. “I didn’t want to see it torn down and a mansion built here.”

That was a possibility.

Under county zoning, up to 10,000 feet of additional space could be built on the parcel. It now accommodates a 2,652-square-foot house where the Blakes live in the summer and six guest cabins, two of them remodeled original ranch buildings.

Realtor Chad Budge said he had “four or five very serious inquiries” about buying the parcel. One looker envisioned a corporate retreat, another “brought his architect out ... he planned to leave it pretty much as it is but expand the house.”

The property was listed at $5 million. Foundation and park officials wouldn’t say what the final price was.

Leslie Mattson, president of the park foundation, said she received calls after the land went on the market last August. People were worried, she said, that the parcel might be developed in a way that would hurt the Mormon Row Historic District.

“When the property was listed we had a number of phone calls from historic preservationists and other groups who were concerned,” Mattson said. “We said that if we could find someone to help with this we’d pursue it.”

She called the donor who came up with cash for the purchase “Ms. Anonymous” and said the name of that person will “probably never be revealed.”

“Sometimes an angel arrives at your doorstep,” Mattson said.

The Moulton family was not only among the first homesteaders on Mormon Row, adjacent to Blacktail Butte, but also the last still working the land there. Clark Moulton, Hal Blake’s grandfather, raised oats, alfalfa and cattle until 1979.

In a Jackson Hole News&Guide article last summer, Blake recalled standing on the homestead with his grandfather, surrounded by open land and with the Tetons dominating the western view.

“I can remember distinctly standing here with my granddad, and him saying, ‘This is the biggest acre in the country.’ ”

Attending the commemoration were a variety of Park Service officials, including park Superintendent David Vela. He praised the foundation’s work and others involved in preserving the land for the public.

And, in a link to the past, Larry Rockefeller was there to mark the occasion. His grandfather, John D. Rockefeller Jr., was a longtime supporter of the national parks who bought thousands of acres of private land in the 1930s that he donated to Teton park. That included much of Mormon Row.

Rockefeller said he had a sense of “my grandfather, John D. Jr., smiling down on us today, delighted by the success and ongoing commitment to preserve this beautiful park for all future generations.”

A contract for the land has been signed; it’s expected to close this fall, Mattson said, ending a chapter in Jackson Hole history.

While tourism and natural beauty are preserving the last acre, Gardner pointed out that saving it depended on factors that had little to do with what made it successful early in the 20th century.

My wife and I have stayed at the cabins there and no doubt to us as close to heaven as one could get. Like many we are sad we can no.longer stay there however we wish Hal and Iola the best as they persue the next chapter of their lives. Our hope is the Park Service keeps the property well maintained and pristine as it is now. Happy it will stay as is and not a mega mansion.

I wonder if the park will continue to run it as a bed and breakfast? Is that even a possibility?