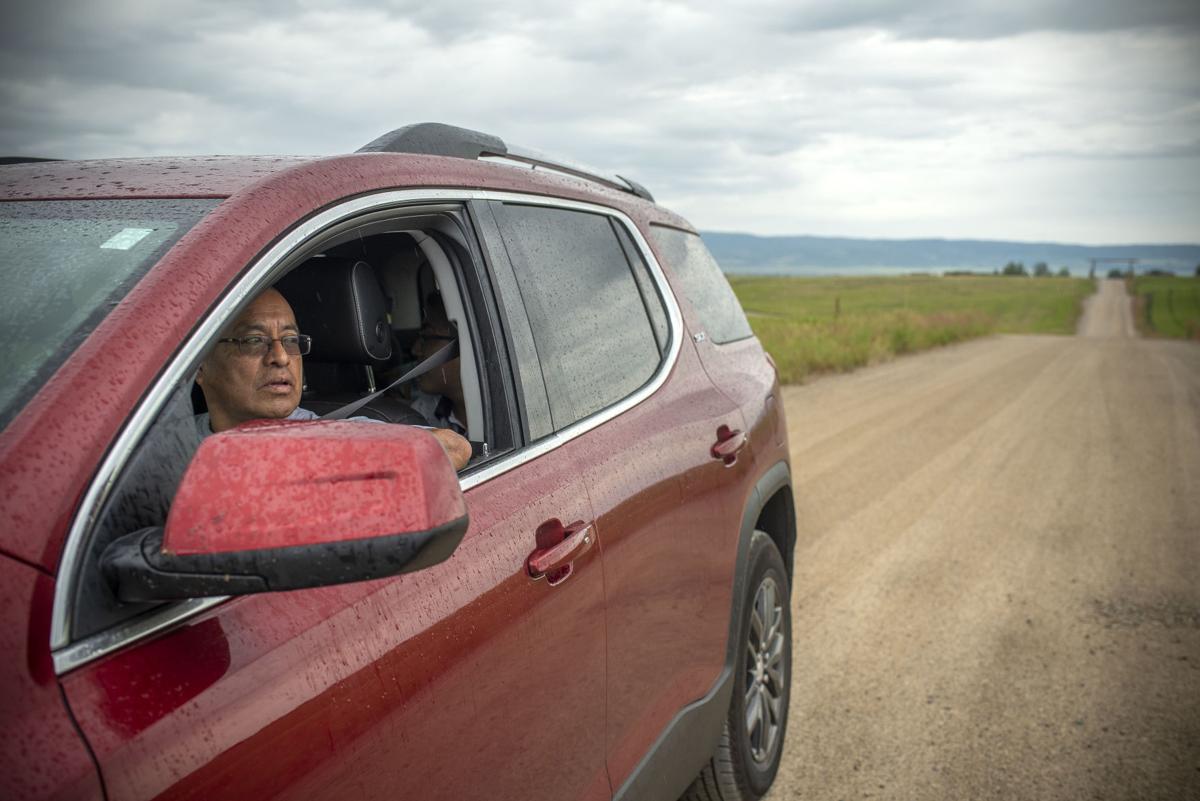 Eugenio Bautista, of Chicago, left Idaho Falls on Tuesday morning during a road trip with his family. He punched “Yellowstone National Park” into his iPhone and started following the prompts, only to be led to the Indian Ridge subdivision north of Alta. “We got up early this morning so we could get [to Yellowstone] early,” he said. “And now we wasted two hours already.” 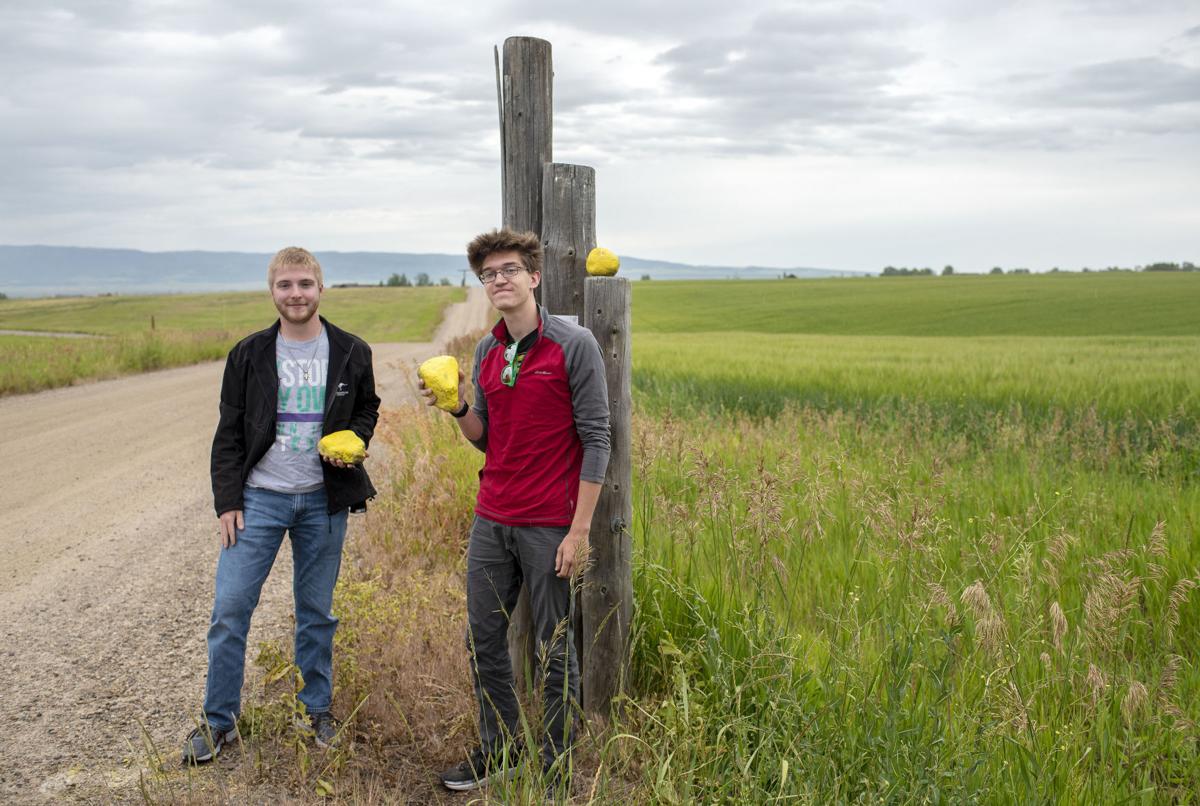 Dozens of tourists have been arriving at a small, rural subdivision about three miles north of Alta every day after punching “Yellowstone National Park” into the Maps app on their iPhones, including Matt Britsch and Jack Thornby of Devils Lake, North Dakota. The yellow stones were placed at the entrance by some of the subdivision’s residents, along with a sign outlining how they’ve been misled by their Apple mobile devices. 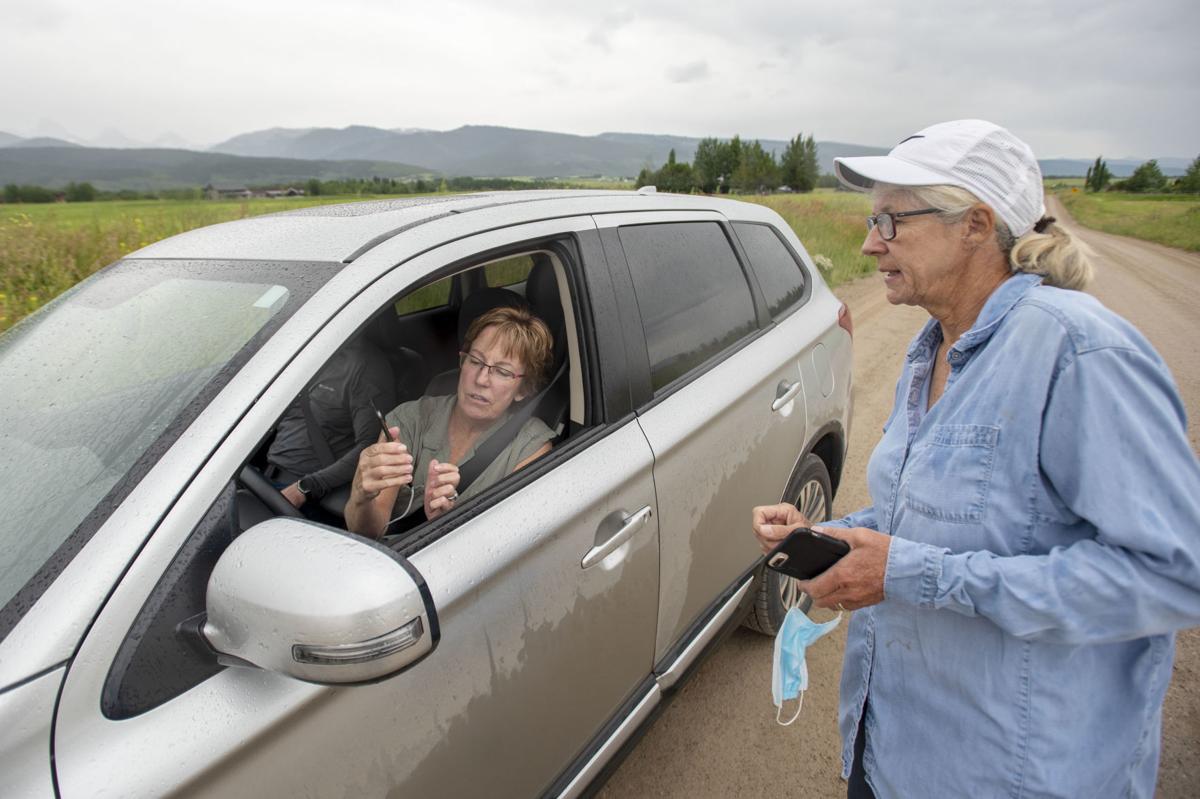 Indian Ridge subdivision resident Carol Gregory, right, helps Carol Trimble navigate to the correct entry for Yellowstone National Park on her iPhone on Tuesday morning near Alta. Trimble and her husband, both educators in Kanab, Utah, were on their way to the world’s first national park for a summer vacation before starting school this fall. 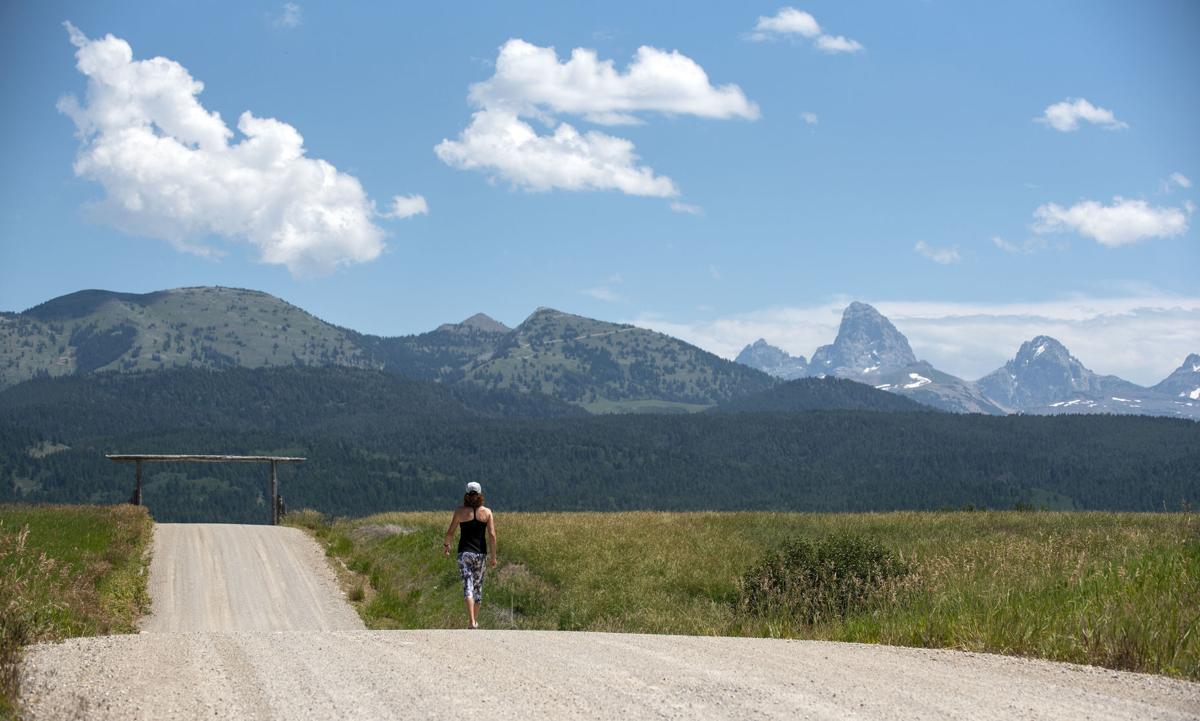 Indian Ridge resident Suzanne Arden walks to get her mail at the entrance of the subdivision at Stateline Road north of Alta. Arden said most of the tourists who were misdirected by Apple’s Maps app went looking for Yellowstone in a small subdivision to the south, but that traffic shifted to Indian Ridge when the southern subdivision chained off access earlier this year. 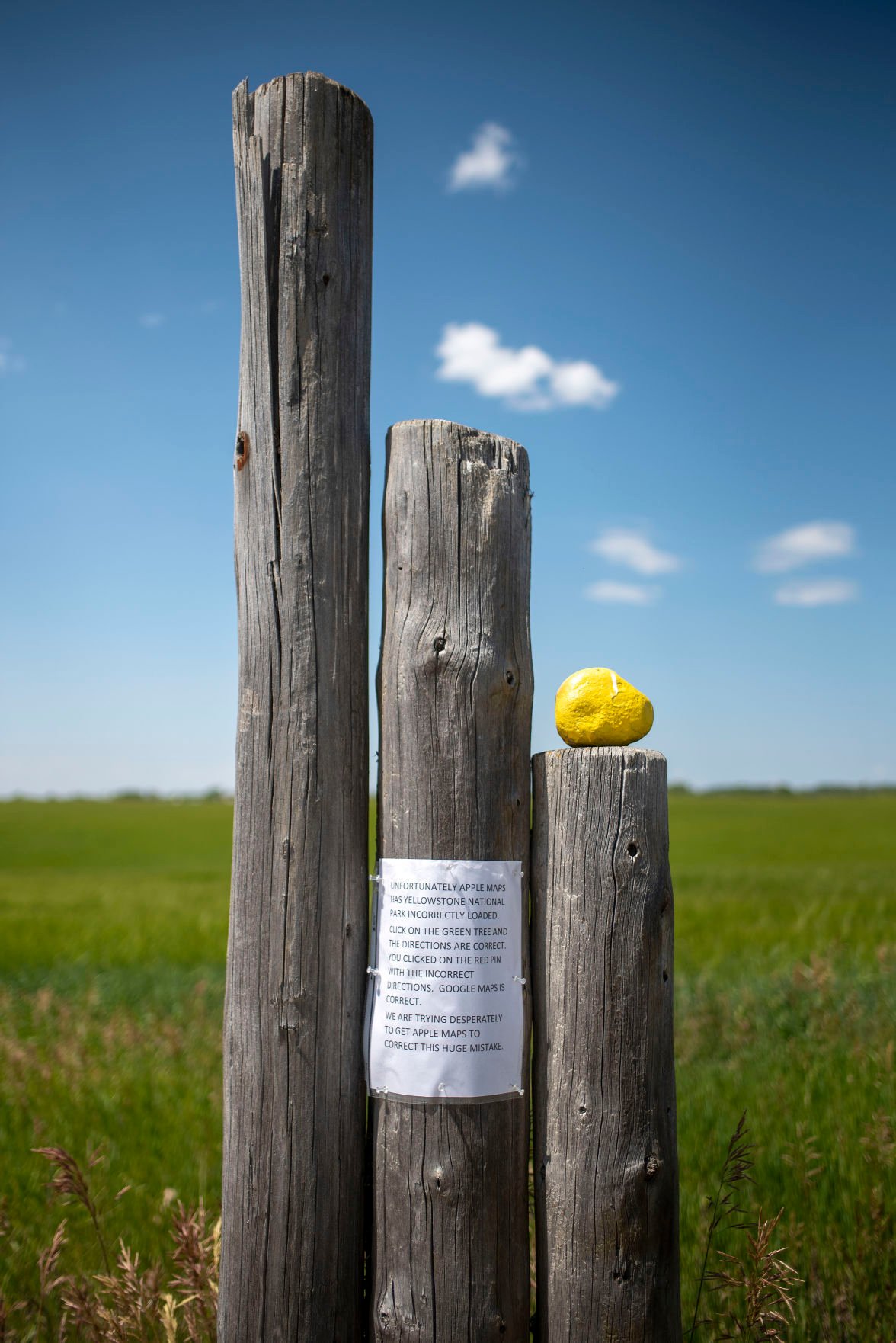 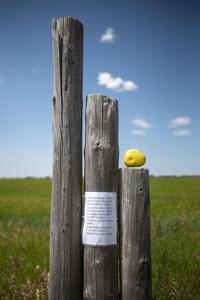 En route with his family from Yosemite National Park, the roadtripper from Chicago had slept in Idaho Falls on Monday night. Awakening, he punched “Yellowstone National Park” into his Apple Maps app, tapped the first result that appeared and hit the road. Shortly thereafter, he ended up outside Driggs, Idaho, instead. With bison and geysers nowhere in sight, even some remarkable westslope Teton views didn’t ease the disappointment.

“I’m frustrated,” Bautista said. “We got up early this morning so we could get in there early, and now we’ve wasted like two hours.”

Devils Lake, North Dakota, residents Matt Britsch and Jack Thornby were at the same place at the same time, also drawn to residential Teton County, Idaho, by technology. They had been even more inconvenienced by Apple’s error. Tuesday was one of the recent high school graduates’ designated “Yellowstone days,” and they’d laid their heads at the KOA Campground in Dubois. But while back on the road, their friend Siri told them to keep on rolling down the highway rather than turning off at Moran. Some 70 miles and a trip over Teton Pass later, they were under rainy skies along Stateline Road — with another 90 miles to go to West Yellowstone.

“What the heck?” Thornby said.

Britsch, his University of North Dakota-bound buddy, had some choice words for the tech giant whose faulty mapping service had stole several hours of their day.

“This is how you treat customers who depend on [Apple] maps for getting to one of the largest and most visited national parks?” he said. “Yikes. That’s bad.”

Bautista, Britsch and Thornby’s saga plays out every day — repeatedly.

About 20 vehicles per day, her neighbors guess, end up diverted to the sprawled-out residential area along the Wyoming-Idaho border.

“We really want to get the word out,” Arden said last week. “Yellowstone is not in Driggs.”

“Hundreds of people are going to Yellowstone,” she said, “and finding out it’s a mailbox.”

Al Bregy, her neighbor, explained how the error keeps happening. People input Yellowstone National Park into the Apple Maps and up come two emblems: a green pine tree that goes to the promise land of the world’s first national park and a misleading red pin. Confusingly, the text of the park’s address says Yellowstone is in Alta.

“What people do, because of every other situation, is they go to the red pin,” Bregy said. “Have you tried it? It’ll blow you away.”

More sympathetic than annoyed with the uninvited guests, residents have tried to make the best of it. Carol Gregory, Bregy’s wife, playfully painted some rocks at their street entrance yellow. A printout posted up helps hapless tourists come to terms with their mishap.

“Google maps is correct,” the sign reads. “We are trying desperately to get Apple Maps to correct this huge mistake.”

Gregory is troubleshooting the error with Apple to save hundreds of people hours of time and needless consumption of gas, though her outreach to date has been frustrating and fruitless. On Monday afternoon, Gregory was on the phone with an Apple customer service rep named Vivian while journalists were within earshot (a News&Guide call to Apple’s media line on Tuesday afternoon was not returned as of press time).

“I just hope this doesn’t take all summer long,” Gregory told the customer service rep. “I really want them to jump on this. If they know it’s a problem, why can’t they just put in the keystrokes to change it?”

“I completely get where you’re coming from,” she said. “That’s something I definitely would want to get taken care of.

‘I looked it up myself. If I was going to Yellowstone, I wouldn’t want to show up at your doorstep. I would want to get to Yellowstone.”

But it was Driggs, not Yellowstone, that greeted Kanab, Utah, residents Carol and Dan Trimble at 10 a.m. Tuesday. They’d spent the night in Jackson on Monday, an hour or so drive from the South Gate, before clicking on the misguided red pin.

It wasn’t their first go with Apple Map’s trusty imprecision.

“We used to live in the Middle East in Abu Dhabi — same phones, same app — and we were going to a desert hotel,” Dan Trimble said. “The same app sent us to this dirt road into the middle of the, you know, Arabian Desert. The farther you got the worse it got, and we hit other people who were stuck in the sand.”

Comparatively, the unneeded drive over Teton Pass and up Teton Valley was not bad.

“They’re both beautiful,” Carol Trimble said of Driggs and Yellowstone. “This is really pretty.”

Still, Dan Trimble jokingly wanted a carrot or two from Cupertino, California’s $1.6 trillion homegrown business to make up for the trouble.

“They owe us for gas, time and two bottles of red,” he said.

—Brad Boner contributed to this report

Wow. Living just west of State Line Road, I just checked my iPhone, and sure enough, "Yellowstone National Park" is just 4 minutes away!

I was in GTNP for 10 days in June, but my iPhone thought I was in Alta.

I'll never know what's so difficult about buying a Rand McNally Road Atlas and using the paper maps to get a picture in one's mind's eye of where one is and where you'd like to go!

Agreed. Unfortunately, map reading is becoming a lost skill. As a GIS Specialist, I understand how incredible the GPS is but I still purchase a road atlas every few years. I may be old school, but I won't end up somewhere I don't want to be by mistake.

My Navy captain brother used to remind me that GPS is a navigational aid. Not that I haven't been misdirected a few times...

[thumbdown] Just another reason why I love my Galaxy S10+ Android and have never ever owned or will buy an I phone. On a side note, You would think tourists would be a bit more pro-active in planning a route. As a kid growing up in Jackson, we used to send them toward Snow King telling them that road up the mountain was the way to Yellowstone and sure enough, trailer and all, they took off that way. Ahh, the good ol days..

Ah youth... We use to send them toward Hoback Jct.