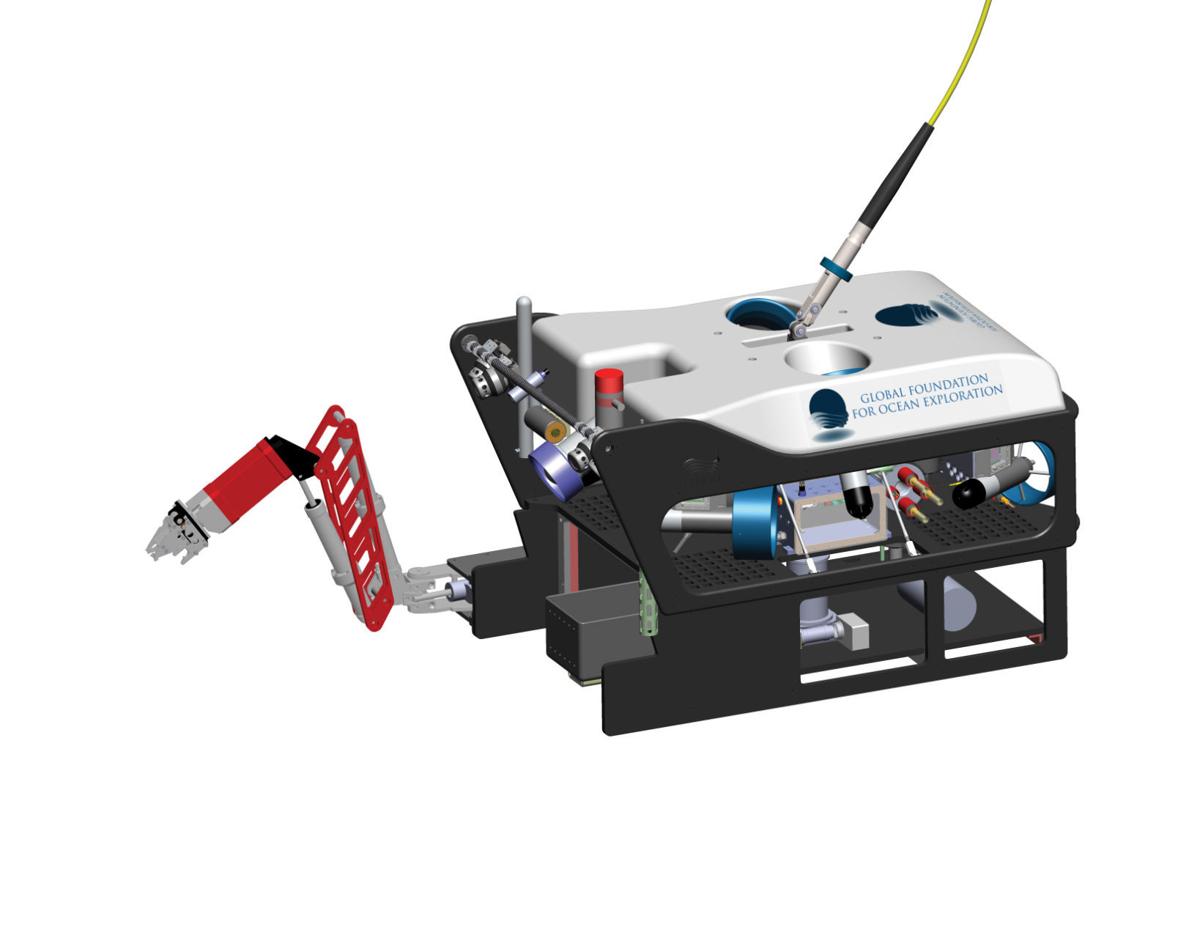 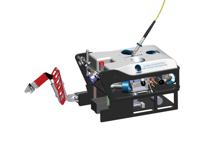 This rendering shows a prototype of a 700-pound exploration robot that the Global Foundation for Ocean Exploration is developing to probe the depths of Yellowstone Lake. 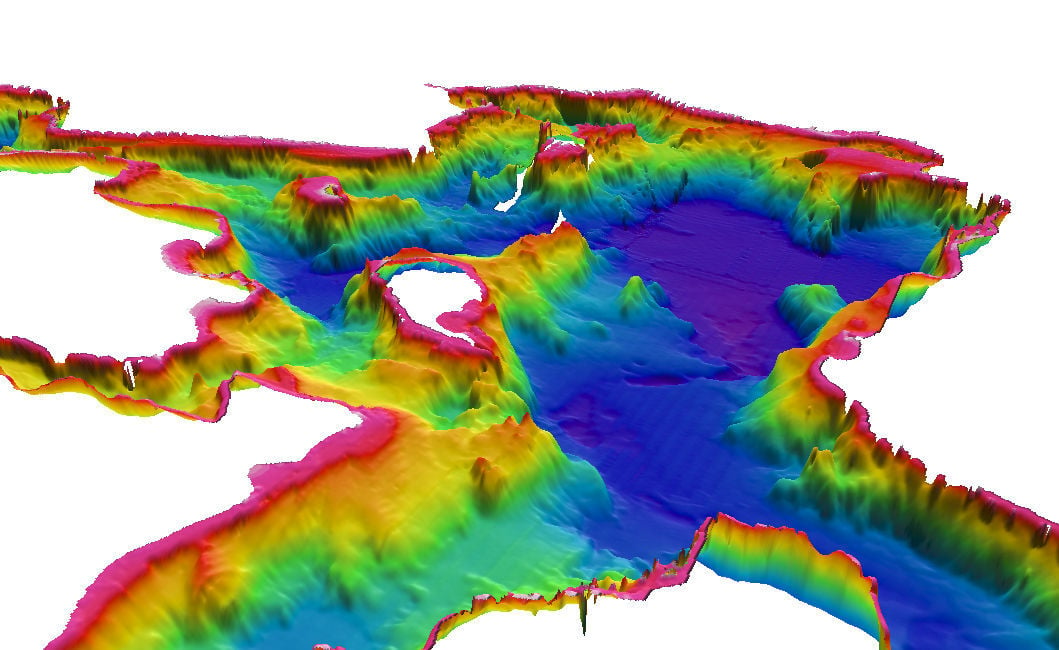 Yellowstone Lake, which bottoms out at 390 feet deep, figures to soon have a new inhabitant: A $500,000 robot that will explore underwater chemistry, microbiology, volcanology and geology.

This rendering shows a prototype of a 700-pound exploration robot that the Global Foundation for Ocean Exploration is developing to probe the depths of Yellowstone Lake.

Yellowstone Lake, which bottoms out at 390 feet deep, figures to soon have a new inhabitant: A $500,000 robot that will explore underwater chemistry, microbiology, volcanology and geology.

Down in its depths Yellowstone Lake’s bottom is broken up by tiny fissures fed by geothermal heat that releases from the guts of the underlying caldera.

At those vents exist microbes, tiny and mysterious forms of life that are found only in the low-nutrient waters of the high-altitude body of water.

Those phenomena and others in the fields of chemistry, microbiology, volcanology and geology will be better understood a few years from now, when the Global Foundation for Ocean Exploration figures to have a new half-million-dollar underwater robot combing the depths of Yellowstone Lake.

A source of scientific exploration for decades, what’s happening underneath the surface of Wyoming’s largest lake is a subject about which there is still much to be learned.

“I think what we’re learning is something that Ferdinand Hayden predicted back in the 1870s,” Global Foundation President Dave Lovalvo said in a phone interview from Connecticut. “There are things that we learn today that the significance may not be fully understood until years from now, when our technology advances.

“The possibilities of what exists in Yellowstone Lake are things that, right now, we don’t have nearly a full understanding of,” Lovalvo said. “I think it’s very important that we understand what’s there.”

Lovalvo, an ocean scientist and explorer, first gave up salt water for fresh to try to understand Yellowstone Lake’s mechanics back in 1985. He has been at it ever since. In the early days he said, a 50-pound, 2-foot-long robot with a standard definition camera was being used to probe the lake bottom.

The machines have grown in size and function since then, and the coming generation of aquatic robot will continue to improve.

“Technology has moved forward substantially,” Lovalvo said. “We’re now moving to a vehicle that’s going to weigh in at around 700 pounds. It’s going to be about 5 feet long, 4 feet high and about 4 feet wide — something on the neighborhood of the footprint of a washer and dryer side by side.”

The robot, which is being custom made for Yellowstone Lake, will be equipped with a number of doodads, such as a five-function “manipulator arm.” The machine and its sensors will gather chemical and temperature data and readings of seismic activity. It will take high-definition footage of the lake bottom with the aid of an LED light.

The equipment will be left under the ice to monitor in Yellowstone Lake year round.

“We don’t know much about the lake in the wintertime,” Lovalvo said, “so this will allow us to get a cross section of what’s happening over the course of a year.”

The information, some of which feeds to a boat in real time, will help Lovalvo and others map out features like the thermal vents.

“What we have to do is go around and find these,” Lovalvo said. “And these vents, more often than not, are very small.

The thermal and seismic information gathered will complement Yellowstone caldera research that University of Utah scientist and Moose resident Bob Smith has made a career of, he said.

“In a hot spring on the surface [of Yellowstone] there’s a really famous microbe called Thermus aquaticus,” Smithee said. “It’s used in every DNA or genetic or research lab in the world, because it has this unique ability that allows the scientists to reproduce DNA.”

The Global Foundation won’t be keeping the robot for itself. Collaborators include Yellowstone National Park, Woods Hole Oceanographic Institution, Montana State University, Oregon State University, the University of Minnesota, the U.S. Geological Survey and the National Oceanic and Atmospheric Administration. A National Science Foundation grant is supporting the first round of research, planned to start this summer.

The Global Foundation will spread word of its findings not only in academic journals and technical reports but also via documentary videos and by displaying it in places like gateway community museums.

The machine also has potential to assist in Yellowstone managers’ war on lake trout. For more than 15 years netting boats have culled Yellowstone Lake’s mackinaw, and researchers are playing with new methods of targeting underwater spawning sites.

“The lake trout spawn in deeper waters, and they don’t really know yet where they spawn,” Smithee said. “So having a deep-diving submersible could potentially be useful.”

To help fund the $500,000 robot and an accompanying $500,000 boat, the Global Foundation for Ocean Exploration will be launching a Kickstarter campaign. The funding drive is not yet live but it is expected to begin in early March.