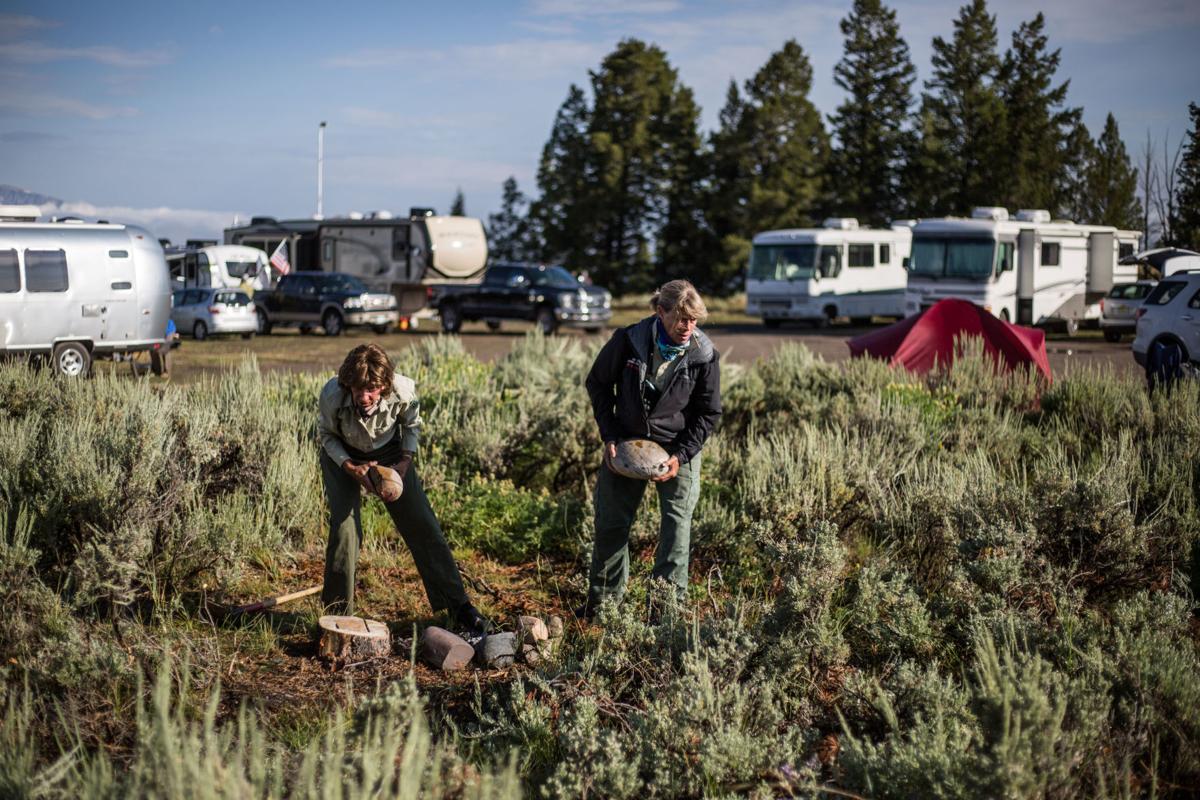 Linda Merigliano and Lesley Williams Gomez take apart a newly built campfire ring last Wednesday in the Toppings Lake area of the Bridger-Teton National Forest. With Grand Teton National Park’s campsites filling every day, campers are spilling into “dispersed” forest areas, often finding themselves more densely packed than they would be in the valley’s developed campgrounds. 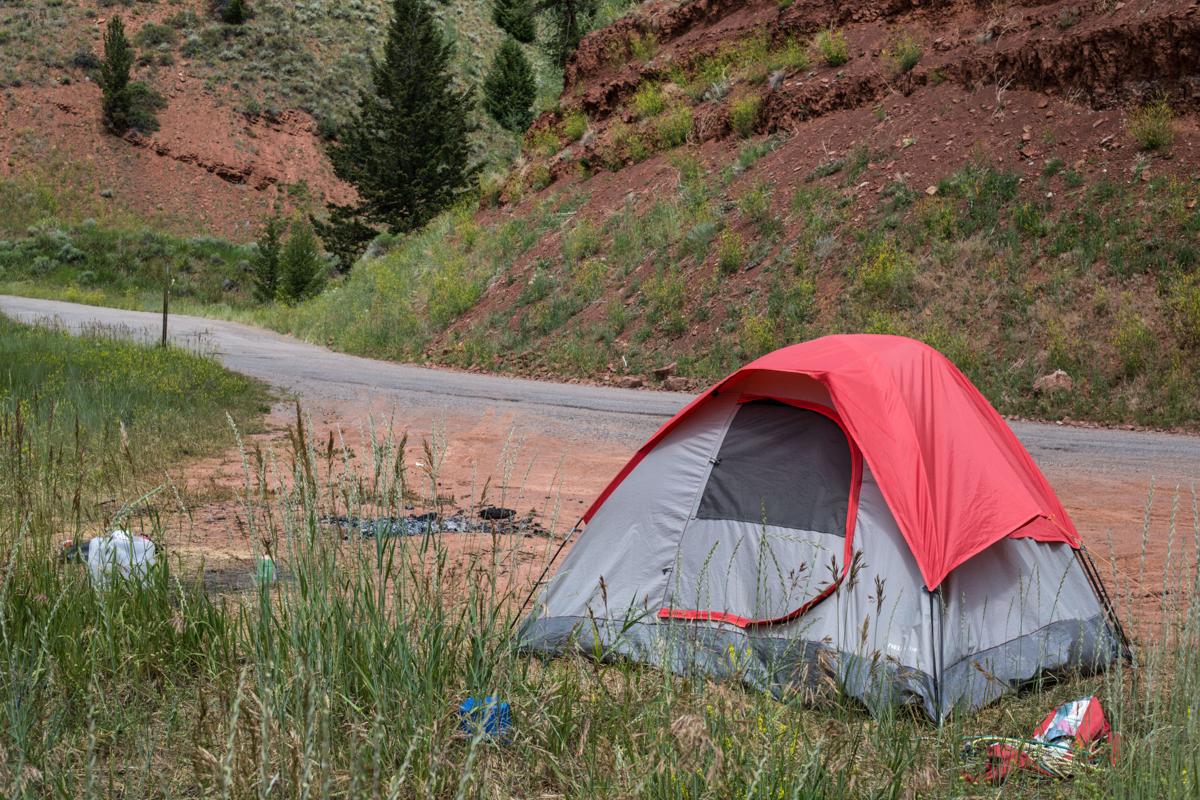 With developed and dispersed campsites across the valley filling each day of the summer — often early in the morning — campers have taken to roadside turnouts on Forest Service land, like this one just barely off the hard surface of Gros Ventre Road. 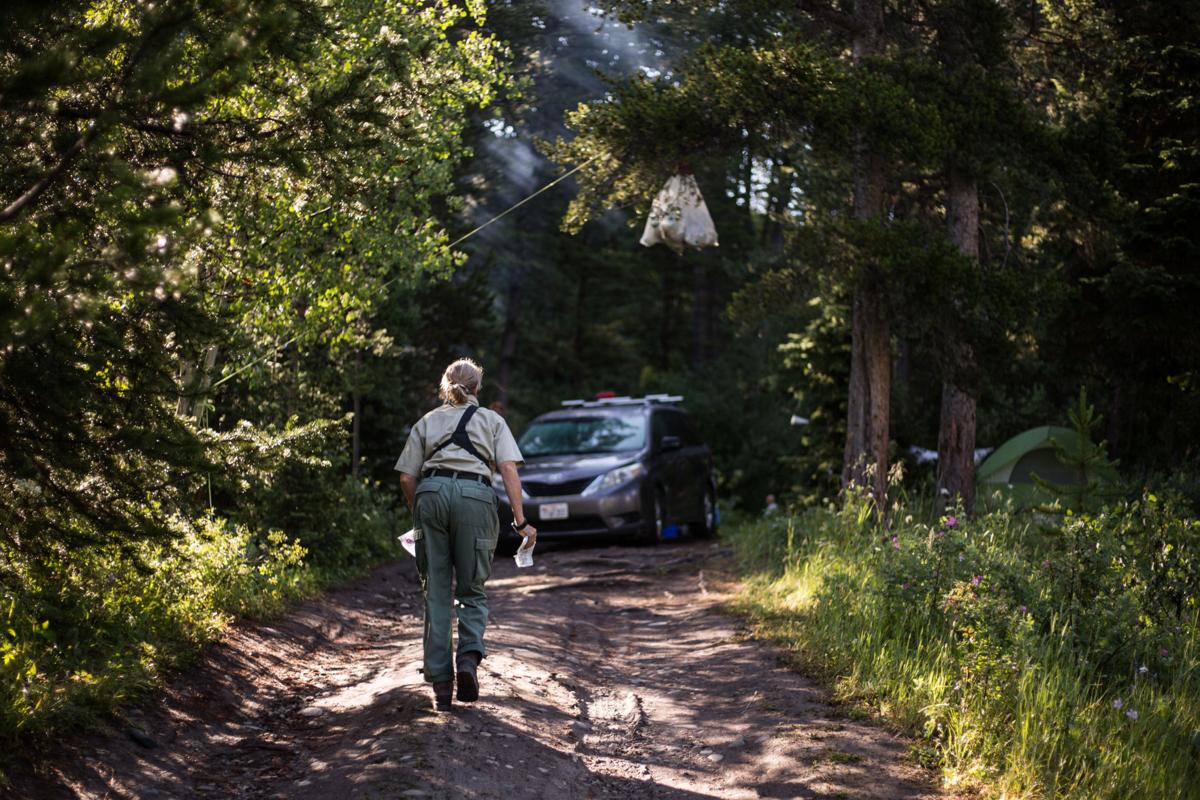 Lesley Williams Gomez checks in with campers visiting from Utah during a morning patrol last Wednesday in the Toppings Lake dispersed camping area of the Bridger-Teton National Forest. 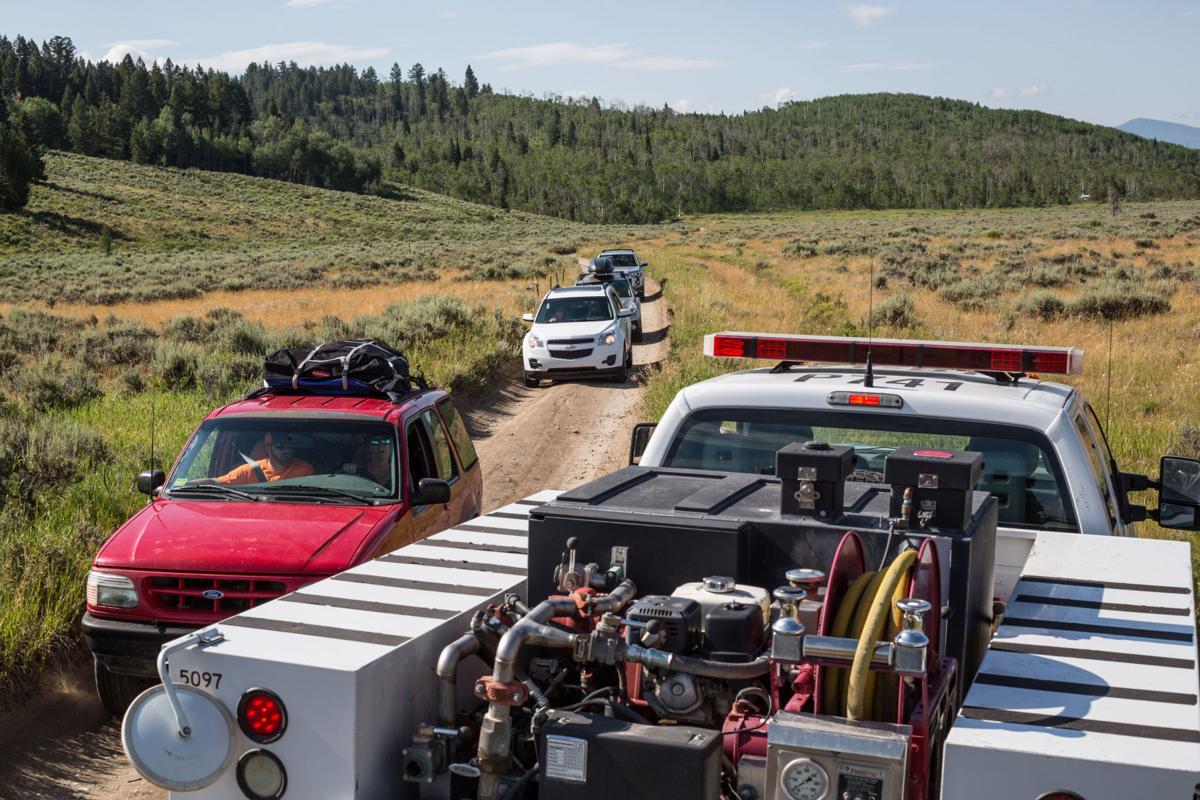 Linda Merigliano and Lesley Williams Gomez stop to offer advice to a string of out-of-luck campers headed north from Shadow Mountain last Wednesday morning. The 50 posted campsites on the mountain routinely fill up each morning. 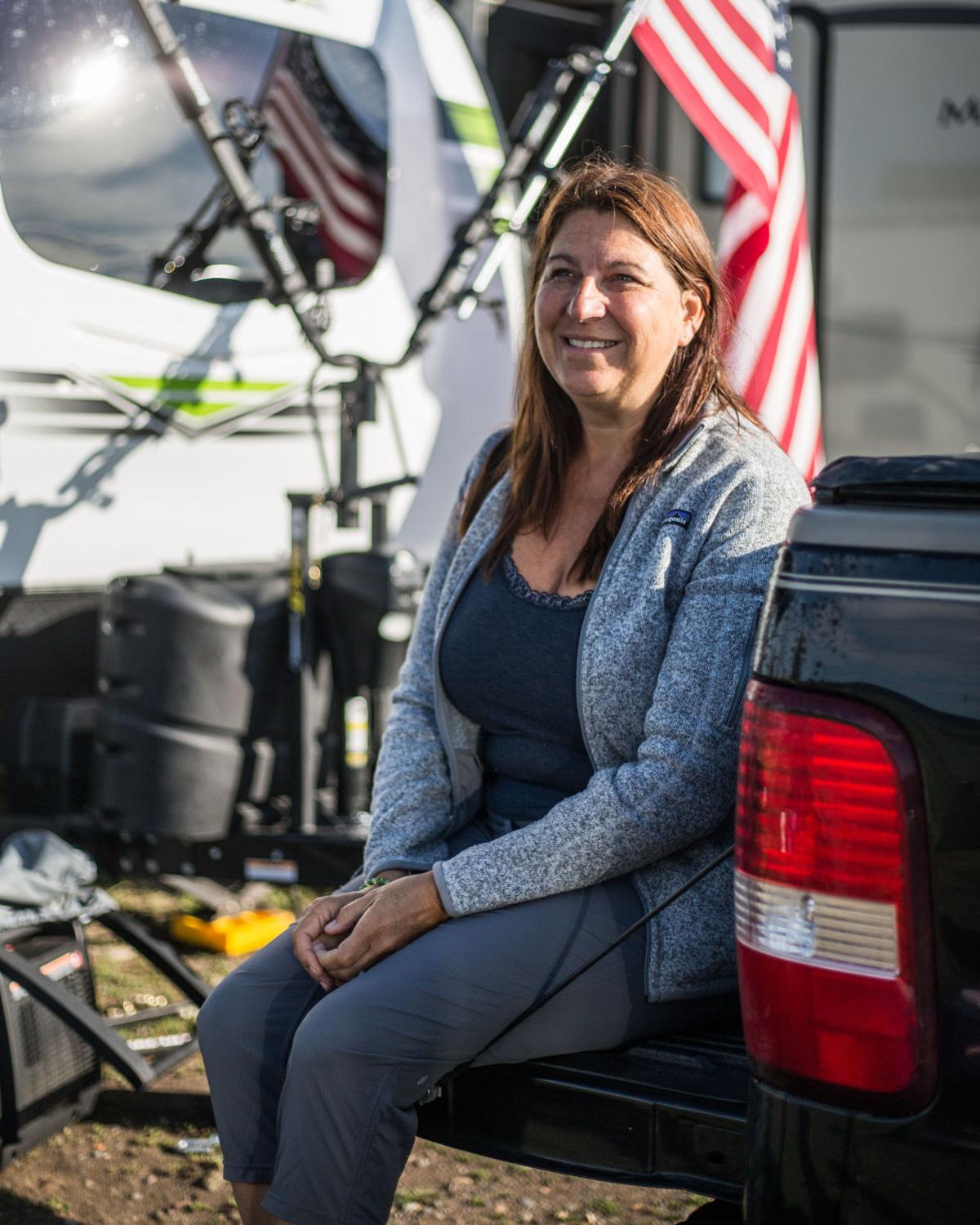 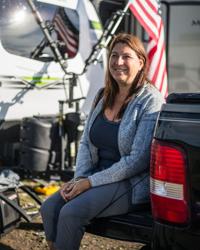 Shandel Santorini, of Minneapolis, found herself packed between other campers in the Toppings Lake dispersed camping area, which she found listed on Campendium.com. Many campers use the site to find free campsites and RV parks across the country. 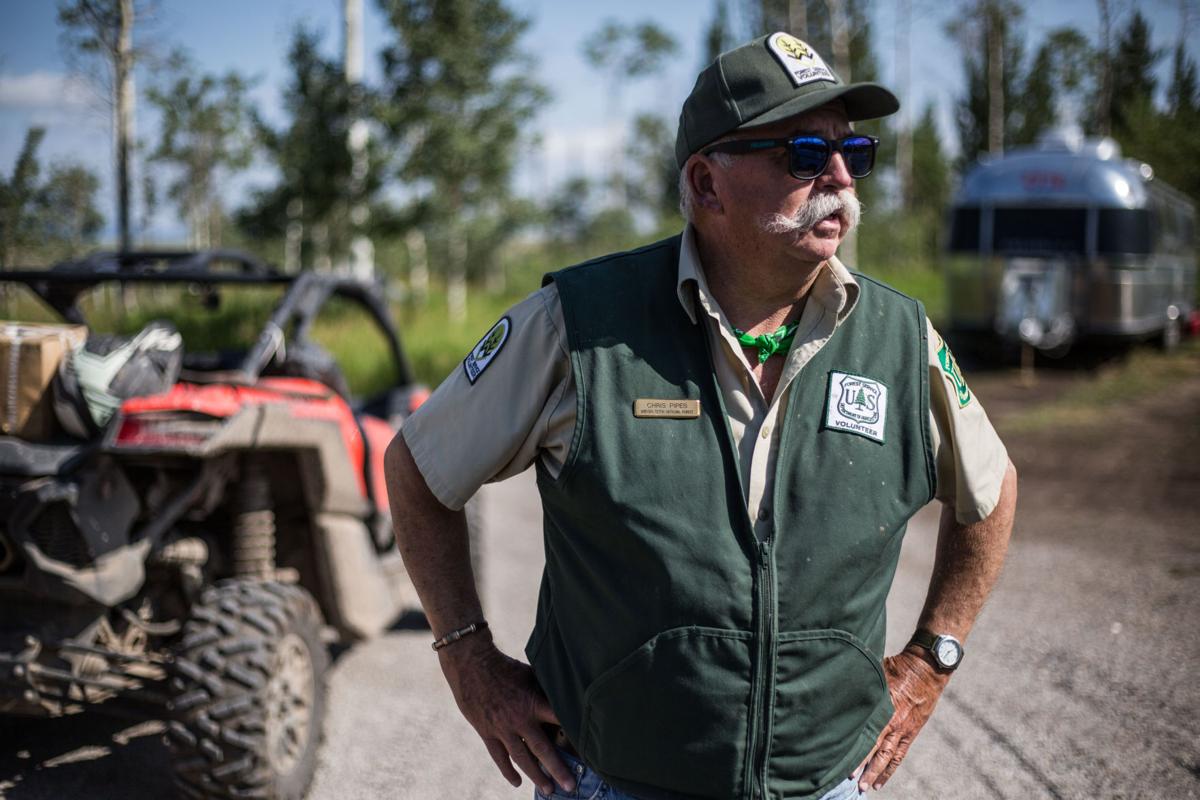 Chris Pipes, the Bridger-Teton's Shadow Mountain volunteer "ambassador," is stationed at the popular camping area through mid-September. “We never go to bed without every site being filled," he said.

It was mid-morning when Lesley Williams Gomez’s Bridger-Teton National Forest pickup truck inched up onto the sagebrush to make room along the seldom-traveled, graveled northern stretch of Antelope Flats Road.

Not one, but four vehicles were headed her way, and the roadbed wasn’t big enough for the both of them. The caravan of campers was pointed north toward Lost Creek Ranch and the quickly filling dispersed camping area along the ridges above Triangle X Ranch. They’d already been to Shadow Mountain, only to find that its 50 spots were all taken.

“None of these people are together,” Williams Gomez said, “and they’re all looking for campsites.”

The bustling scene in a once-quiet corner of the forest wasn’t a shock to Bridger-Teton staffer Linda Merigliano, who shared a ride with Williams Gomez.

“It’s the eclipse every day,” the veteran wilderness and recreation program manager told the News&Guide. “It’s lasting all summer.”

Worries that August 2017’s total solar eclipse would bring more people to Jackson Hole than ever before were enough to prompt Jackson Town Council and Teton County Board of Commissioners to hire an eclipse coordinator. Fears of total gridlock and chaos proved mostly unfounded, although the celestial event did create considerable crowding, especially in camping areas.

Chris Pipes, a volunteer Bridger-Teton “ambassador” stationed at Shadow Mountain, was not fazed by the morning’s traffic. It’s his daily reality.

“We have open sites every day, but only for an hour or two,” Pipes said.

Usually they’re all spoken for at the base by 8 a.m. Up higher, they’re gone by early afternoon.

“We never go to bed without every site being filled,” Pipes said.

Merigliano and Williams Gomez are anticipating that the new, more crowded conditions ushered in by the COVID-19 pandemic will persist at least through Labor Day weekend — but potentially years into the future. The hordes are being deflected from Grand Teton National Park, where lodging is depleted, and attracted to an outdoor experience like sleeping in a tent or RV, where social distancing comes pretty easily.

“It’s all being driven by views of the Tetons,” Merigliano said. “Everyone wants to be up north of Jackson near the park.”

Traffic counters at Shadow Mountain and in the Spread Creek/Toppings Lake area are detecting 300 to 400 vehicles daily driving the roads. The front desk at the forest supervisor’s office on North Cache Street is taking about 160 calls a day, mostly from folks inquiring about camping.

“That’s way more than what we were dealing with during the eclipse,” Merigliano said. “It’s actually turned into a three-person operation.”

There used to be a single employee assigned to phone duty.

Instead of Shadow, Curtis and Toppings — which are all filling fast — the forest is directing people to more remote places like Hatchet and Flagstaff Road in the Leidy Highlands, Ditch Creek, the Gros Ventre area, and more southern reaches of the forest like Fall Creek Road and the Hoback River basin.

There are even some oddball forest-camping landing pads where the Bridger-Teton is directing masses. The Spread Creek gravel pit is suddenly hosting tourists, Merigliano said, as is the vacant Togwotee Mountain Lodge parking area used by snowmobilers in the wintertime.

There’s a spillover effect obvious to residents who find the more secret spots they frequent are filled.

“I was up Gros Ventre on Friday, and the Crystal Creek Campground, which never fills, every site was filled,” Merigliano said. “And every dispersed site that’s just beyond Crystal Creek was completely filled.”

While cause for bitterness among locals, the crowding doesn’t necessarily turn off Jackson Hole visitors, who mostly venture in from the more peopled parts of the United States and are used to it.

Minneapolis resident Shandel Santorini was posted up near her new RV at a site that Campendium.com has dubbed the “Upper Teton View” dispersed campsite area. The former flight attendant, who heard about the spot through the website, had just retired, and was digging the overall experience of life on the road.

“I just traded my wings for wheels,” Santorini said Wednesday. “This is my COVID baby.”

A friend from Red Lodge, Montana, she explained, had convinced her to come, contending that this would be as quiet a time as any to see a place like Yellowstone National Park.

Merigliano chimed in: “It’s just the opposite.”

Even so, Santorini wasn’t bothered. After “designated, dispersed” sites 8 through 16 filled up, she invited others into the same nook where her RV was parked, opening her space to tent campers.

“This is exactly what I intended to do,” Santorini said. “This is actually my first time dispersed camping.”

But oftentimes campers needing a spot to sleep have less welcoming would-be neighbors, and so they make the best of it, legally or not.

Driving south from Lost Creek Ranch toward Shadow Mountain, Merigliano and Williams Gomez passed one young couple who had spent the night on the side of the road, their tent staked into Grand Teton National Park where dispersed camping is not permitted.

Minutes earlier the Forest Service staffers had disassembled a fire ring — the second of the day — and moved a barricade log back into place to dissuade future use of an illegal makeshift campsite.

“How do you confine this,” Merigliano pondered, “and not just keep allowing this endless expansion?”

Law enforcement is one answer to that question. From January through July 31, Bridger-Teton officers distributed 137 violation notices and 66 warnings — numbers that were about on par with citations issued a year ago in the same period.

But it’s likely the Bridger-Teton will have to adapt in the long-term, adjusting its policies and carving out more places for more people who are being drawn to the Greater Yellowstone Ecosystem.

At the chock-full Shadow base area, Merigliano mulled how much conditions have changed since 2016, the National Park Service’s centennial year that seemed to mark the beginning of a new era and an evermore bustling Bridger-Teton. Just in the last few years, she noted, the forest designated the 50 spots at Shadow, erasing illegal spur roads and restoring areas where camping wasn’t desired. With help from its new benefactor organization, the Friends of the Bridger-Teton, they brought on the volunteer ambassadors, like Pipes, to help with management. There’s even bathrooms now: Three portable toilets, one each courtesy of Teton Mountain Bike Tours, the Bridger-Teton Friends group, and some unexpected COVID-19 funding that came in.

But Merigliano still sees plenty of change coming. All around her campers were readying for their days of adventuring in Jackson Hole. Others had nowhere to go.

“This base area is going to be a developed campground, at some point,” Merigliano said. “It’s full all the time. You need the infrastructure.”

Higher on the mountain, free dispersed sites may be forced to shift to a reservation system, she said. Shadow Mountain Road today is in total disrepair, and plenty of vehicles can’t even make it up.

“We’ve got to be generating some level of funding in order to be managing all of this,” Merigliano said, “and right now, other than people donating, there’s nothing.”