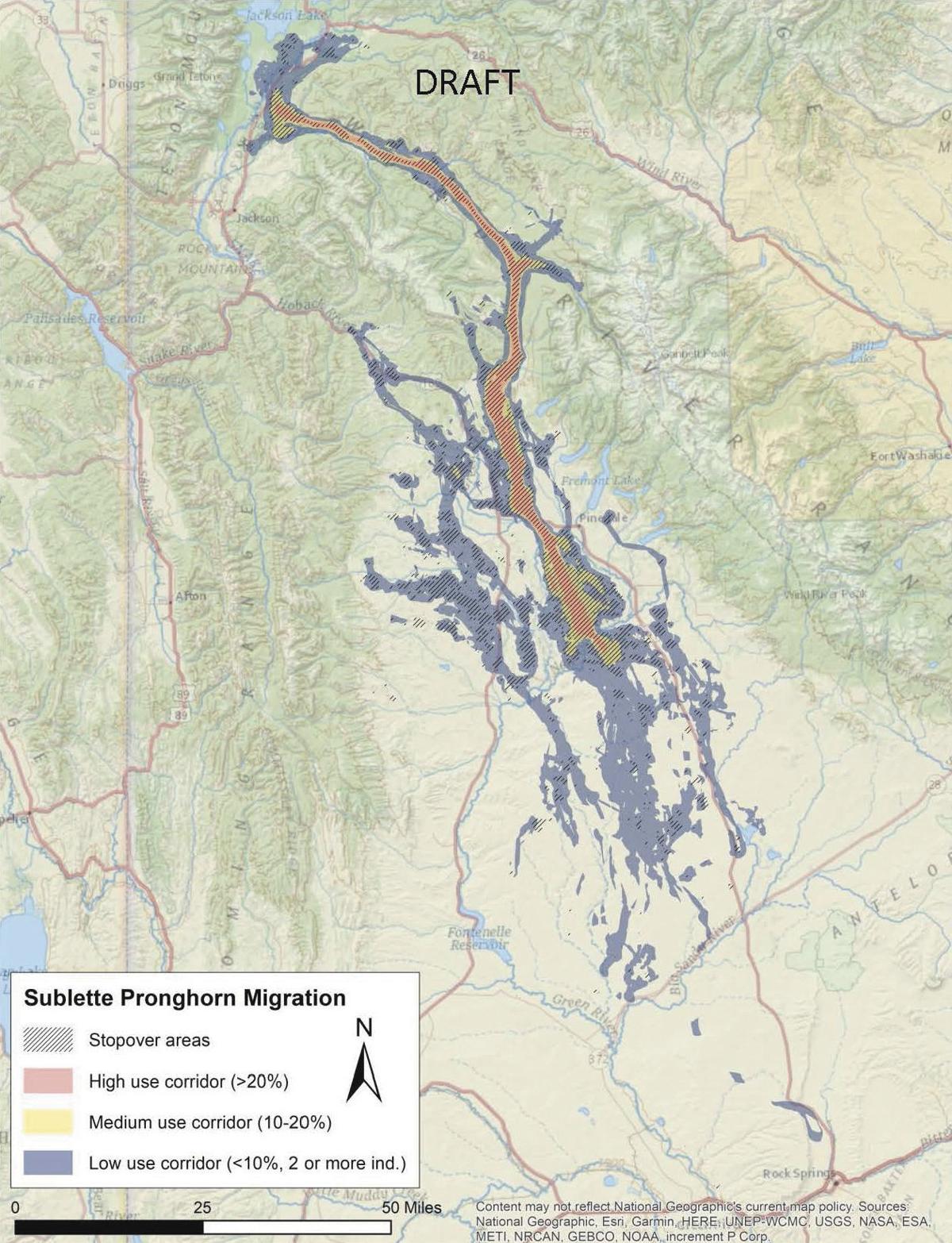 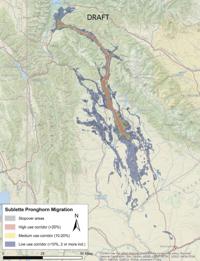 Wyoming has proposed designating and protecting the Sublette Pronghorn Herd migration, also known as the Path of the Pronghorn. This map represents the route as it was proposed in 2019, but it’s in the process of being updated. 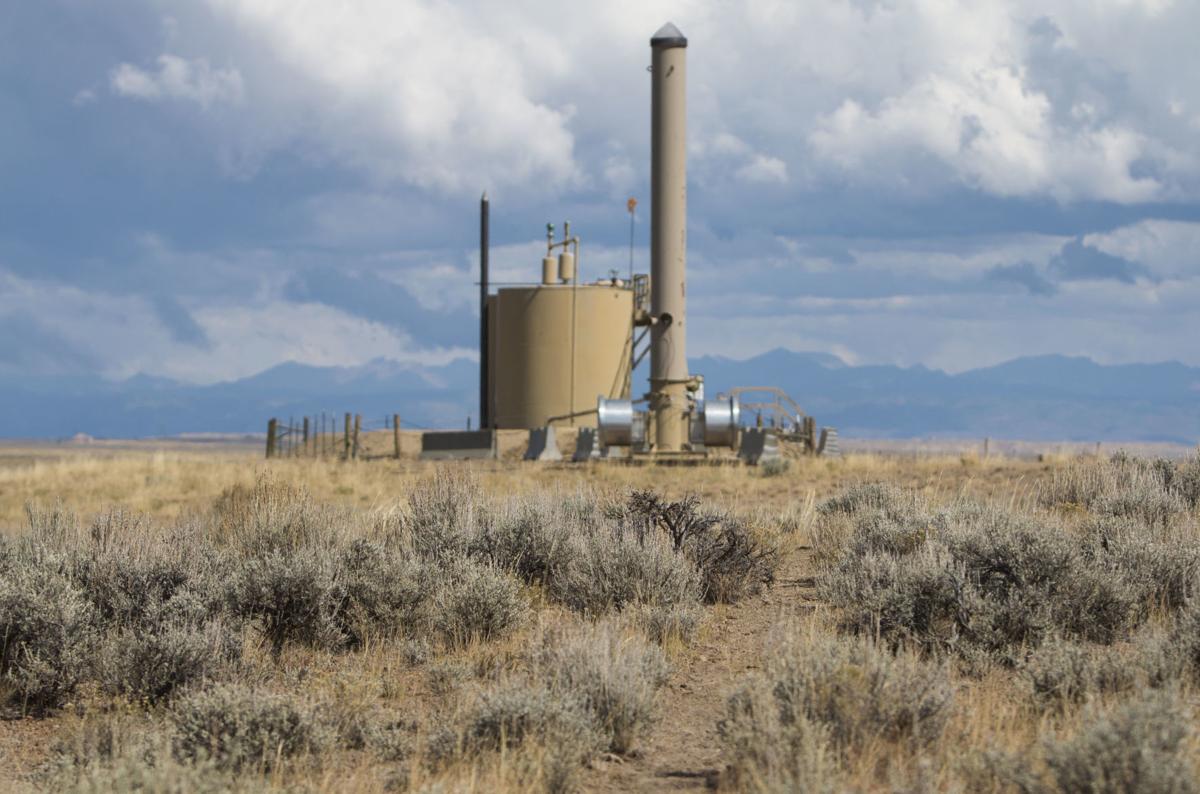 This path cutting through the sagebrush south of Pinedale was made by migrating pronghorn, according to Boulder resident Linda Baker. 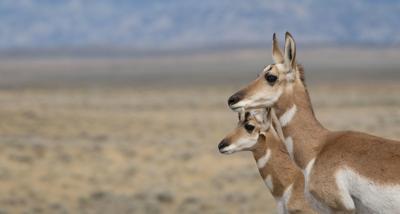 Four hundred or so pronghorn that summer in Jackson Hole have unknowingly enjoyed traveling along protected grounds for a dozen years as they passed through the Bridger-Teton National Forest on their way to winter habitat in the Green River Basin.

The Path of the Pronghorn, as it is known, became the first federally designated migration corridor in the United States in May 2008, when the Bridger-Teton amended its forest plan to recognize the 47,000-acre ungulate travel corridor. But the pronghorn never stopped at the forest boundary, and in the decade ahead they continued their seasonal migration onto Bureau of Land Management property where their movements weren’t recognized or guarded against development.

Starting in 2019, the Wyoming Game and Fish Department attempted to fill in the gaps, proposing to recognize some more southern reaches of the route — a path that has sparked national discussion of big-game migrations in the American West. The state agency’s efforts, however, were slowed by protests from industry groups and put on hold by Gov. Mark Gordon. The governor pushed pause on protection when he announced he would overhaul the protocol for designating migrations. By signing an executive order this winter, the governor completed that process, which attracted broad support.

Meanwhile, the Path of the Pronghorn — or Sublette Pronghorn Migration, as the state calls it — has remained on the drawing board. Now it’s poised to be the first migration path to navigate the state’s new process.

“We’ll put it to test on the Sublette antelope,” said Angi Bruce, Game and Fish’s deputy director of external operations.

Game and Fish used the delay to add some new GPS data from collared pronghorn, whose movements are being assessed through a model that’s being adapted specifically for antelope. The addition will alter the proposed corridor that was publicized last year (see map).

To stay true to Gordon’s order, Game and Fish is also going through an internal “threat evaluation” to see if the pronghorn migration is at risk, Bruce said.

There’s a good likelihood the answer is yes. The route cuts through two of Wyoming’s largest natural gas fields, the Pinedale Anticline and Jonah fields, and then extends into a recently approved field known as the Normally Pressured Lance. Recent research shows that the native tawny-and-white residents are avoiding, and even abandoning, the altered landscape in the Anticline.

A report will be drawn up in conjunction with the threat evaluation, which will then be released for public review. Next up, according to the executive order, is a “biological risk assessment,” a more in-depth examination of the route. This study is a “huge lift” for Game and Fish staff, Bruce said, and could take three or four months, though not more than a year, according to the order.

The executive order calls for the risk assessment then going before the Game and Fish Commission, the governor-appointed body that would allow the public to comment.

Bruce foresees this happening in September. The Game and Fish side of the process should take about a year in total, she said.

If Game and Fish commissioners then sign off on the state’s first-ever pronghorn migration, the proposal moves on to Gov. Gordon.

If the governor also concurs that protecting the Sublette pronghorn herd’s migration path is a good idea, he’d then devise an “area working group,” which would include a county commissioner from each of Teton, Sublette and Sweetwater counties, since the path routes through all three. There would also be up to seven other members, including at least two people representing hunting, conservation and wildlife, one motorized recreation representative, two agriculture representatives and two members whose membership was on behalf of oil, gas, mining and renewable energy.

This area working group would meet in public, using a similar format to the working group that devised the recommendations that shaped the governor’s migration order. They’d have three options: rejecting the proposed migration path, sending it to Game and Fish for refinement or forwarding it to Gordon to be designated.

Gordon’s policy director, Renny MacKay, said that because each migration path has unique characteristics and economic considerations, there is no set amount of time to go through the working group process.

The complex and arguably protracted nature of the process is cause for concern for some conservationists, who otherwise are largely commending Gordon’s new process. Matt Skroch, who manages a program focused on migration conservation for the Pew Charitable Trusts, said that Wyoming is at the front of the pack of western states in terms of preserving ungulate passageways. Still, he had some concerns.

“Our fear is that the abundance of process will not match the scientific information and needs of a particular herd,” Skroch said. “A lot can happen in a year, particularly in an age of ‘energy dominance’ and expedited land-use decisions.”

Skroch also worried that the science could take a back seat to political considerations during deliberations in the area working groups.

MacKay said that the governor wanted to move migration designations along in a timely manner, but he also noted that creating such protections — and bringing everyone on board — is far from snap judgment.

“If you’re really going to make good science the cornerstone of decisions and then factor in social and economic conditions, that does take time,” MacKay said. “That’s the hallmark of Wyoming. The sage grouse executive order took years to put in place, too.”

Also in the migration queue for Game and Fish is a route used by animals that summer in the Bridger-Teton National Forest — a mule deer migration that courses over the Wyoming Range. There’s additional GPS data from collared Wyoming Range deer that the state is adding into its analysis with this migration too, Bruce said.

“We’ll look at that this winter,” she said, “and then we’ll go through the threat evaluation and public comment.”

If completed, the proposed migrations would join three existing routes enshrined by the executive order: mule deer migrations in the Baggs and Platte River valley areas and a 150-mile-long path that’s used by a sector of the Sublette Mule Deer Herd that venture from the Red Desert to the Hoback River basin.

Although these routes are already on the books, Gordon’s migration order does call for reexamining them within two years using the same type of multi-jurisdictional area working group.

Boulder resident Linda Baker, who keeps close tabs on wildlife issues in the Green River Basin, said there have been two applications to drill filed in the NPL field within the proposed corridor and immediately adjacent to it, she said.

Baker said there are benefits from the state having pressed paused on the Path of the Pronghorn designation. The proposed pronghorn route released in 2019 terminated on the south end at the New Fork River.

“But that’s not where the animals stop,” Baker said. “We’ve got a biologically incomplete designation. What the Game and Fish did is truncate the corridor to before where the animals reach their winter range.”

Baker pointed to a graphic-heavy Washington Post story that ran in March, titled “Safe Passages,” which showed that some Sublette Herd animals press as far south as Interstate 80, where they’re then cut off and collided with.

“There is a lot of interest in finding a crossing over I-80, however far south they go,” Baker said. “And it’s possible to do, with the new funding that’s come out for crossings and possible overpasses.”

Just shut down the part of the Jonah that gives JH residents, cheap, reliable natural gas for their mansions. Start bringing it in by truck again, thru the Snake River canyon. It's the only logical solution for them to survive.

The snake river canyon is not a logical path from the Jonah field to Jackson for a gas truck. Where are you from?