A change that’s being pitched to Teton County regulations would allow septic systems and leach fields to be located closer to the community’s largest flowing waters.

Currently, there is a buffer on the books that prohibits putting sewage treatment infrastructure within 150 feet of Teton County rivers, including the Snake, Buffalo Fork, Gros Ventre and Hoback. While revising the county’s small wastewater facility rules, engineer Ted Van Holland proposed eliminating the special “watercourse protection district” regulation, shrinking the river buffer down to 50 feet — the standard for other natural surface waters.

“We think that this is the better way to go,” said Van Holland, who added that any effect septic system effluent is having on Jackson Hole’s largest rivers, which carry hundreds or thousands of cubic feet of water per second, is negligible.

“The dilution that occurs from a septic system into one of these major rivers is, for all practical purposes, infinite,” he said.

In lieu of the separate river standard, Van Holland instead wants to develop separate and more overarching “source water protection” standards for Teton County. These would be more comprehensive, regulating other sources of water pollution, like fertilizer. By doing away with the separate watercourse buffer, it would avoid redundancy and eliminate confusion.

“We’d like everything to be in one place when it comes to source water protection,” Van Holland said, “not strung in two different places.”

Van Holland said he found the existing rules to be too rigid and burdensome, and applicable to relatively few properties. Out of 500 septic system applications he’s processed over his four years on the job, he guesses he’s run into the 150-foot river buffer as an impediment about a dozen times.

“Most of them are from Evans [Construction] on down,” Van Holland said. “There are a lot of historic lots that are crowded against the river. Most of them are developed, but they’ll probably redevelop, and right now it’s just outright prohibited to put a septic in that 150-foot buffer.”

In some cases, Van Holland said that rule has discouraged homeowners from upgrading aging septic systems. It would make more sense, he said, to have more nuanced regulations.

As an example, Teton County could require an advanced septic technology when the system is sited near a river. Perhaps the most polluted and environmentally sensitive streams, like Fish Creek, need stricter standards, he said.

But some Jackson Hole water quality advocates are wary of the change.

“It’s a huge step backwards, with no scientific basis that I can see,” said Dan Heilig, senior conservation advocate for the Wyoming Outdoor Council.

Heilig pulled up past iterations of Teton County’s small wastewater facility regulations and found that the 150-foot riverside septic system buffer has been around for more than 40 years.

Rendezvous River Sports owner Aaron Pruzan wrote in an email that the proposed change was “very disappointing” and argued that the county should be moving toward more-protective water quality regulations.

“As a headwaters county with more Wild and Scenic river miles than any other county in the United States,” Pruzan said, “anything less than the best is not good enough.”

The elimination of the watercourse protection districts was not among the high points that Van Holland outlined to county commissioners when he presented the reworked draft regulations last week. 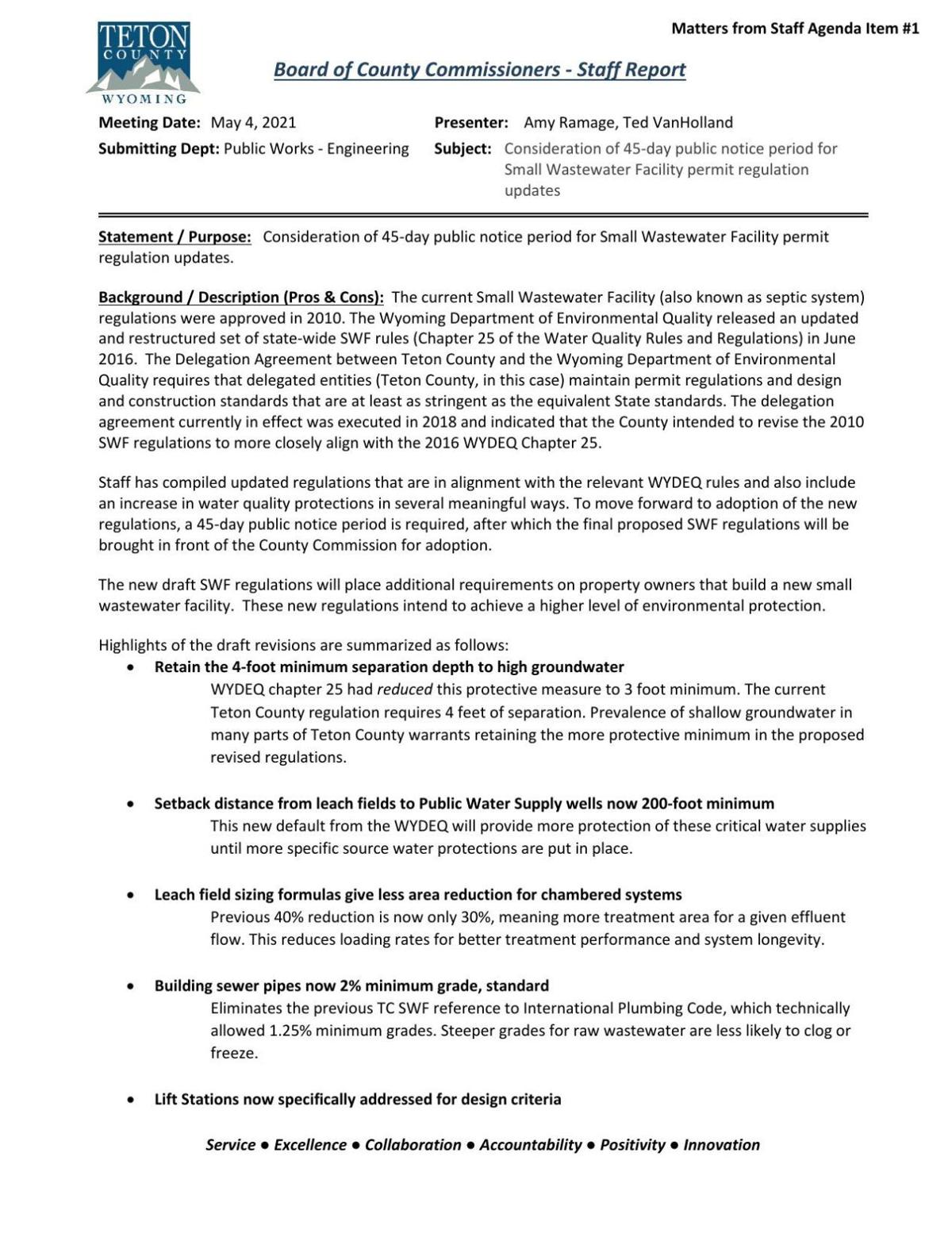 Other adjustments to the regulations include changing an engineering formula to increase the size of leach fields and adopting a new Wyoming Department of Environmental Quality standard that requires leach fields to be buffered from public water wells by 200 feet, at a minimum. A copy of the draft regulations is attached to the online version of this story at JHNews&Guide.com.

The proposed changes are subject to public comment, which is due by June 26. Comments can be emailed to tvanholland@tetoncountywy.gov.

“We think this makes a lot of sense for a variety of reasons,” Van Holland said. “This is a proposal. If slews of comments came in and moved the commissioners to want me to put the watercourse protection district back in, I would.”

“As a headwaters county with more Wild and Scenic river miles than any other county in the United States, anything less than the best is not good enough.” — Aaron Pruzan Owner, Rendezvous River Sports

It seems like a better course of action would be to prioritize hooking up Hog Island and south to County sewer...but I'm no engineer...