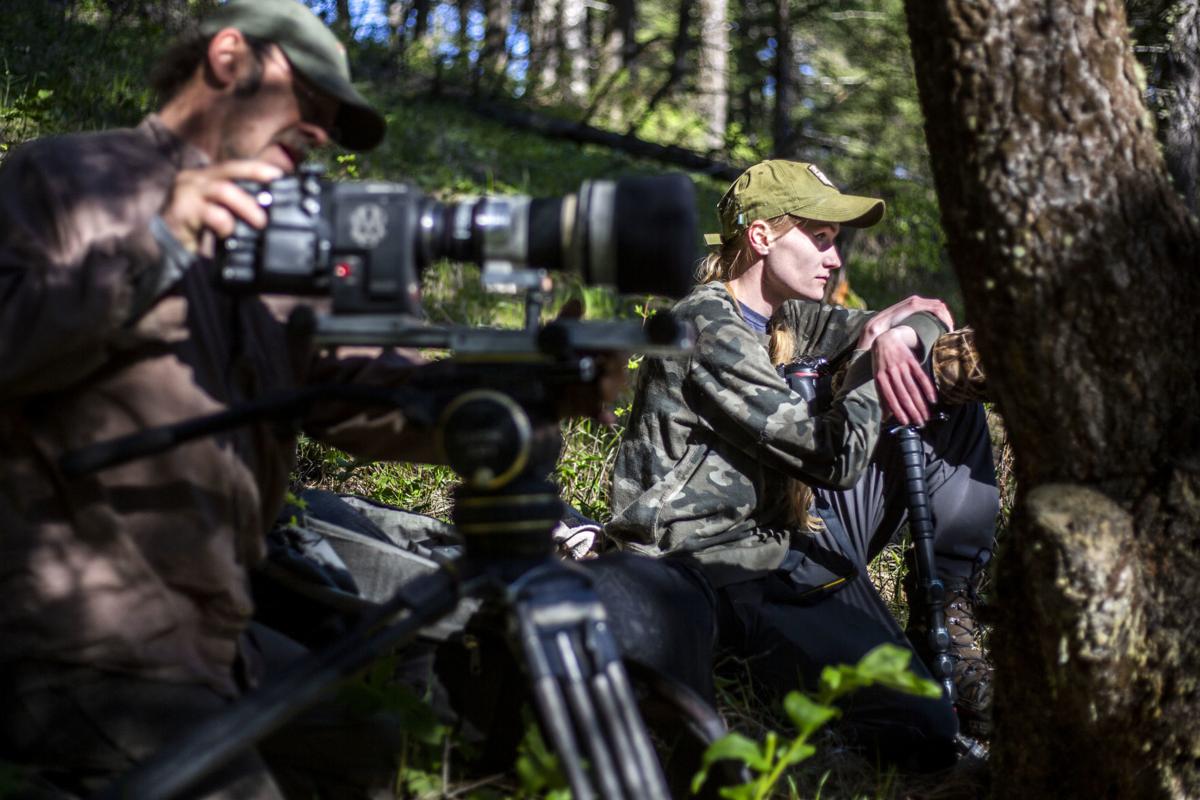 Wildlife photographer Savannah Burgess, right, and videographer Jeff Hogan set up and wait for a male goshawk to return to its nest Monday, May 25, on Snow King Mountain’s eastern flank. 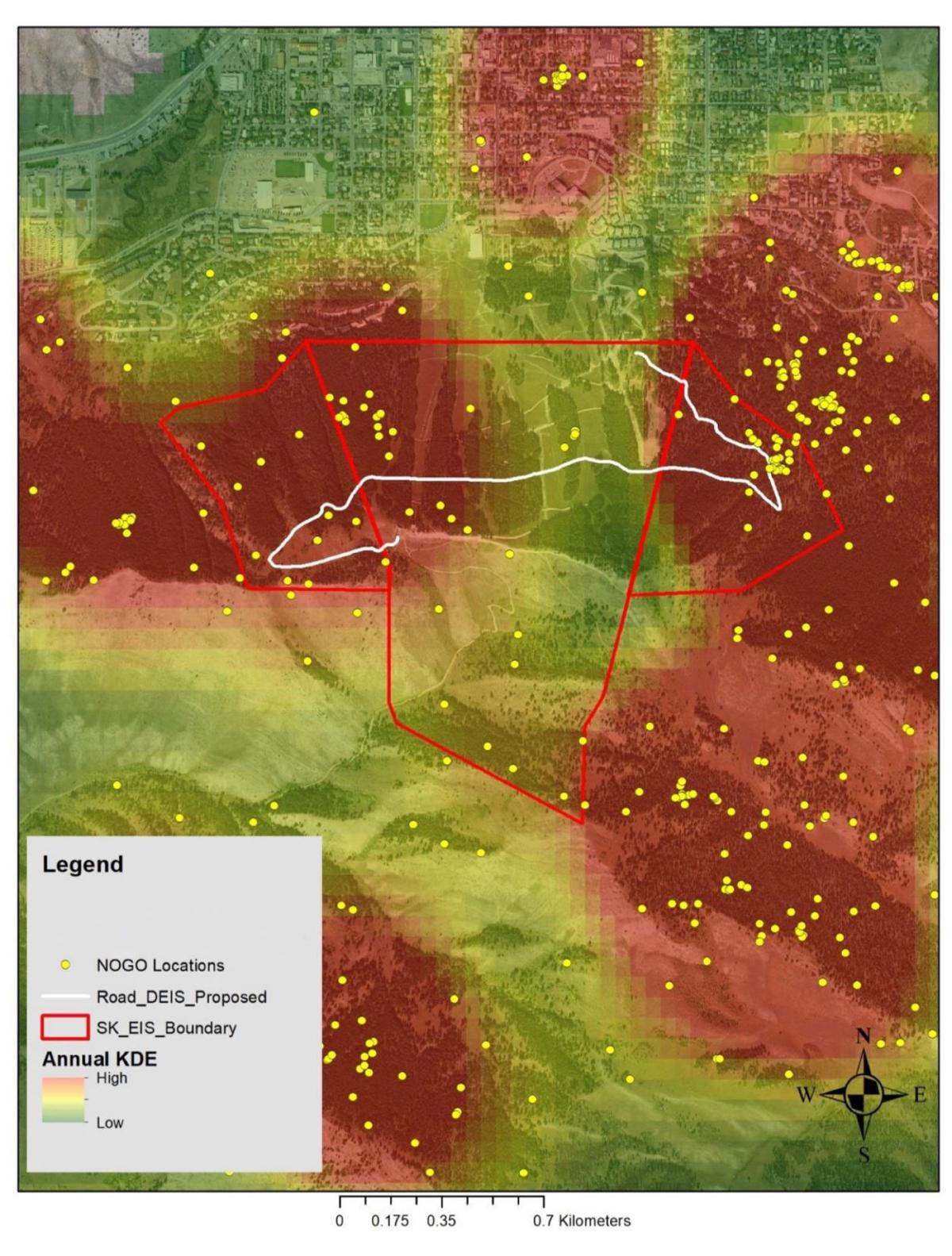 Areas with red and orange hues are used frequently by a GPS-fitted male goshawk that’s lived on the Snow King Mountain hillside for at least the last seven years. The ski resort has proposed expansions to the east [looker’s right on the map] also overlap two goshawk nest sites and encroach on two other nesting sites.

A male northern goshawk, right, briefly returns to its nest while a female incubates the pair’s eggs Monday, May 25, on Snow King Mountain. The pair maintain several nests near the ski area’s eastern boundary. Teton Raptor Center has called for an alternative development plan for the mountain that excludes the bird’s nesting territory in accordance with the U.S. Forest Service’s conservation strategy for sensitive species.

Savannah Burgess parked herself on a timbered Bridger-Teton National Forest hillside that was steep enough she sat eye level with a female goshawk also parked tight.

The red-eyed raptor, the wildlife photographer explained, was nesting. With dad out hunting, she stayed close to her unhatched brood. On a chilly late May Monday morning Burgess guided friend and wildlife videographer Jeff Hogan to the site, and for hours they sat waiting and hoping to witness a “food transfer” — the act of the male fetching a meal for its mate.

“This is a special nest, very close to human civilization,” Burgess said. “It’s unusual. Literally, I was on that ski lift and the male flew by me. That’s crazy.”

The open slopes of Snow King Mountain Resort sit just a third of a mile or so to the west. Even closer, just a few hundred yards from where Burgess and Hogan nestled in to watch the nesting goshawk, the historic ski resort plans to expand its operation.

Burgess deemed seeing a goshawk from a ski lift “crazy” partly because the raptor represents a rare species, and a bird lover’s treat. The largest of three accipiter species in the Northern Rockies, the northern goshawk is the Bo Jackson of raptors in terms of size, speed and mobility flying through tight quarters. Burgess likens them to “flying mountain lions.”

They’re also held in special esteem by land and wildlife managers and are a species that the Bridger-Teton National Forest and state of Wyoming both say need deliberate conservation efforts. The U.S. Forest Service regards goshawks as a “sensitive species” while the Wyoming Game and Fish Department classifies the goshawks as a “species of greatest conservation need.”

Abundance and population trends are “not well known,” according to the state’s wildlife action plan, but a system developed by The Nature Conservancy to rank species’ conservation statuses considers breeding goshawks “imperiled” in Wyoming because of a “very restricted range, very few populations (often 20 or fewer), steep declines, or other factors making it very vulnerable to extirpation.”

So goshawks were among the raptor species Teton Raptor Center staff looked out for when the Bridger-Teton National Forest released a draft environmental impact statement outlining the impacts of Snow King Mountain Resort’s plans to redevelop and expand the small ski hill in town.

The forest’s analysis disappointed Bryan Bedrosian, research director for the Teton Raptor Center. The U.S. Forest Service underestimated threats to goshawks, looked past GPS data he provided and steered clear of the forest’s own recently adopted conservation goals for goshawks, he said.

“The consultant who wrote the draft EIS just simply didn’t use all the data that were available to the Bridger-Teton because we had provided the Forest Service with that data,” Bedrosian said.

It so happens that the goshawk pair Burgess and Hogan had their eye on is the most reproductively successful goshawk couple known to exist in Jackson Hole.

The Raptor Center was commissioned by the resort for five years to monitor raptors dwelling around Snow King and found that the goshawk pair has two active nests just outside the proposed eastern expansion and another couple alternate nest sites within the slated development area.

When the pair is using those sites, they’re having success. Biologists and technicians monitoring the nest have found offspring five of the past seven summers. Their reproduction has averaged out to 2.3 nestlings a year — the most productive territory out of eight goshawk nests that the center has kept tabs on for at least the last three years.

“We find that the expansion of the boundary to the east and associated increase of human use during the breeding season (March 15 – Aug. 1) would significantly impact northern goshawks and potentially lead to negative population-level impacts to the species on Bridger-Teton National Forest,” the center wrote to the forest this spring. “The ‘protective measure’ of not removing a nest tree is insufficient to reduce the significant impacts to northern goshawks. We also find that the year-round recreation activities and infrastructure may affect both breeding and wintering great gray owls.”

The Bridger-Teton declined the News&Guide’s requests to interview a biologist or specialist for this story, but spokeswoman Mary Cernicek said that the EIS and public comment process underway is intended to catch potential shortcomings and respond accordingly.

“That’s exactly how the process is designed to work,” Cernicek said. “We submit a draft, and the public is allowed to comment. That drives the analysis and tells us what was flawed, what needs improvement and what we were strong on.

“Then we go forward and make changes to the final,” she said. “That’s the intention and that’s exactly what the Forest Service is going to do.”

That final planning document, Cernicek said Tuesday, is due out later this summer.

Snow King representative Jeff Golightly said this week he wasn’t very familiar with the goshawk issue and wanted to follow suit with the forest and refrain from discussing details.

“We rely on the forest and we’ve said all along that we’d support the forest’s positions,” Golightly said, “because they’re the landlord.” 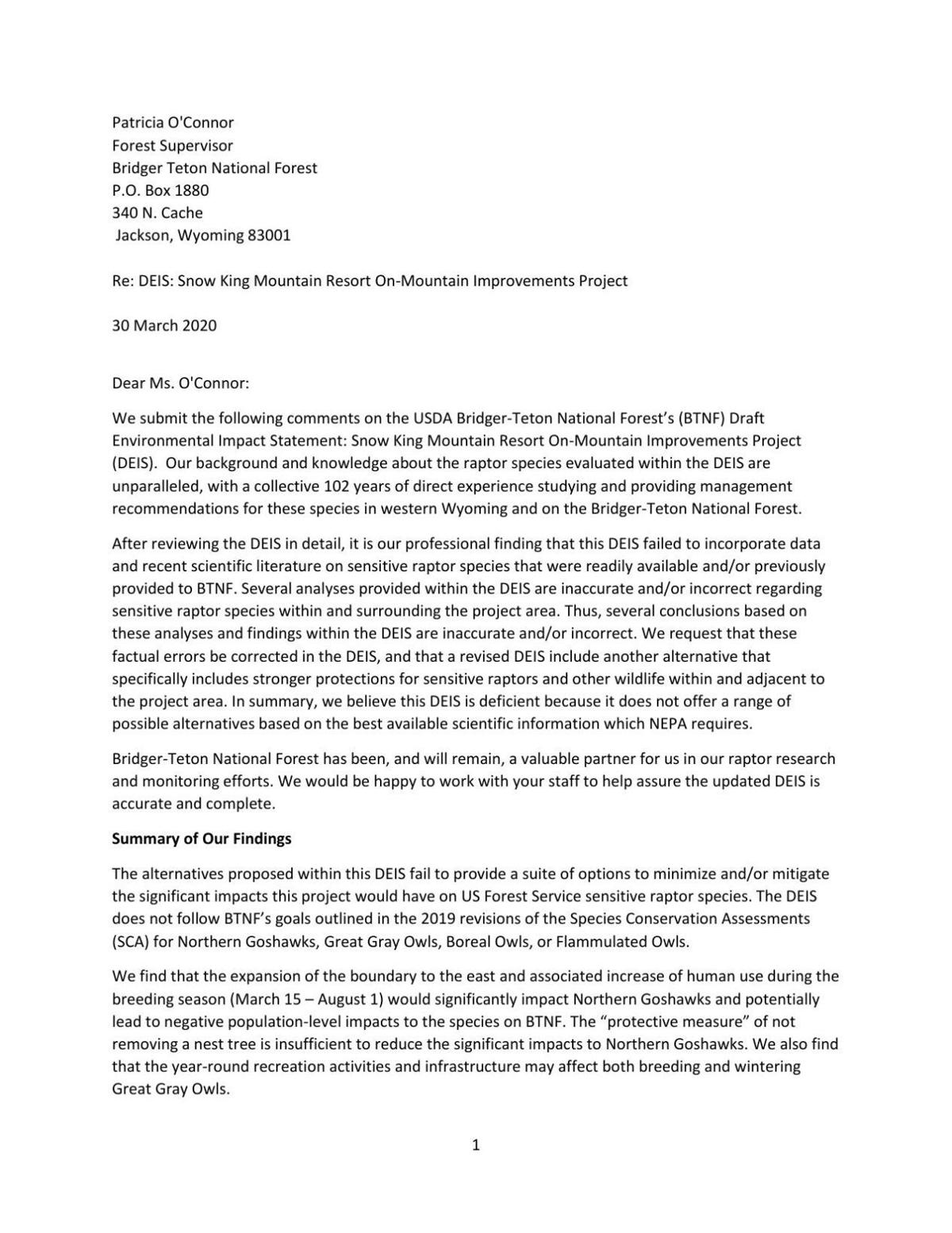 It wasn’t the Forest Service, but a consultant, Cirrus Ecological Solutions, that prepared the draft EIS, with Snow King Mountain Resort footing the bill.

While the Teton Raptor Center said the analysis misses the mark, that document is intended to assess effects on sensitive wildlife like goshawks — and it mentions the species 62 times.

All of the Snow King development options the forest is considering (except for the no-action status quo) propose expanding Snow King to the east by 67 acres, and all options propose routing a new, wider road up the mountain through the new terrain. All of the plans would put new ski runs through the goshawk habitat east of Snow King, and one of them, an option with a “resource protection emphasis,” would add a beginner mountain biking trail through the area as well.

The forest’s analysis of the plans proposes taking down one of the goshawk’s alternate nest trees nearest the road where grading is needed, and states that the ski area “may or may not” remove another alternate nest tree used by the pair in recent history in order to glade trees to benefit skiing.

But the most recent active nest trees — both outside the proposed boundary expansion — would be left standing and have a 30-acre buffer zone. The draft EIS contends that the goshawk pair “would likely be able to” keep using their overall territory by taking advantage of treed habitat for foraging and nesting elsewhere on the mountainside. The document also said the plans achieve two of four goals in the forest’s species conservation assessment for goshawks, just updated last summer.

“The language in the EIS is that the birds can essentially just move over because there’s plenty of habitat,” Bedrosian said in an interview, “but I don’t know if that’s a valid assumption based on basic raptor ecology.”

The slope of a hillside and tree density, he said, are both important factors in where goshawks establish territories, and the longtime pair’s many nest sites are where they are for a reason. A GPS backpack fitted to the male, for instance, shows that the bird is largely averse to Snow King’s open slopes but frequently uses heavily forested terrain on both the east and west side of the mountain (see map). 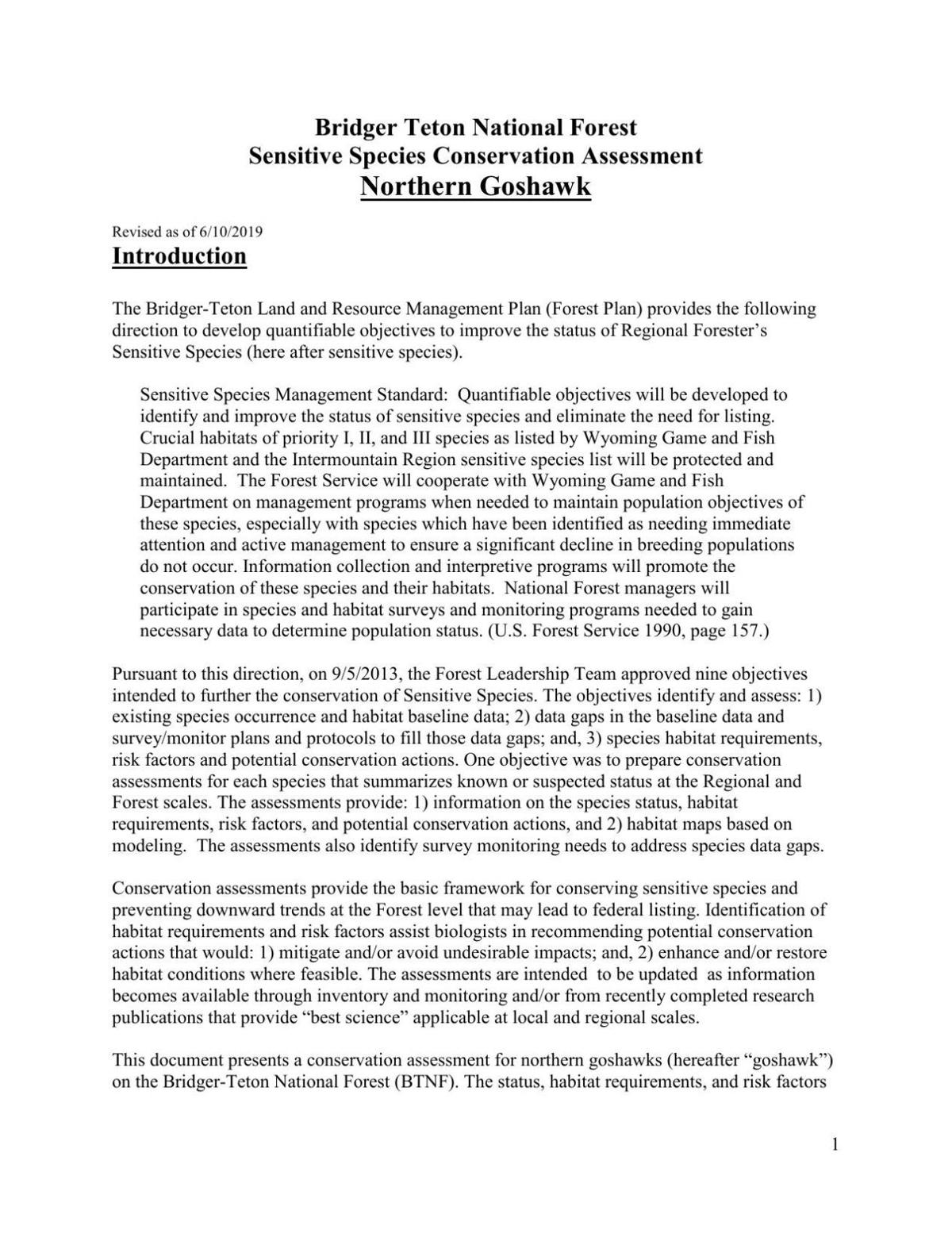 If the Bridger-Teton heeded its goshawk conservation goals in their entirety, Snow King would not be allowed to expand to the east — or at least would need to dramatically change its plans. The goshawk plan calls for identifying a “post-fledgling area” around the nesting site of between 300 to 600 acres, where there would be hiding places and escape cover for the young raptors and their prey.

Resort plans, besides the road and ski runs, call for thinning and glading the vast majority of conifer trees on the east side, both within the current boundary and the proposed 67-acre expansion.

His optimism rooted in experience, Bedrosian said he hopes the forest will do more to protect the birds.

“They’ve been a great partner on many different projects,” Bedrosian said. “How they’re avoiding sensitive species like goshawks and great greys in the Teton-to-Snake [fuels reduction project area] is unbelievable. They’ve modified their designs.

“I guess I’m a little confused about this one,” he said.

Burgess, meanwhile, has been keeping an eye on her favorite goshawk pair. She’s spotted three eggs under the big female — the exact number of fledglings the pair has reared four times in the past. The desire to see a food transfer from dad to mom never panned out on that late May Monday but days later Burgess found a clue to what the accipiters were eating.

Near the nest tree she found a feather that she couldn’t identify. She posted a picture online and got a quick reply.

Her “flying mountain lion” had found a meal — a mallard hen.

So many interesting pull quotes in this..... but one of the most poignant here...“The consultant who wrote the draft EIS just simply didn’t use all the data that were available to the Bridger-Teton because we had provided the Forest Service with that data." Hmmmm, such a surprise..... Makes you wonder what other data Cirrus Ecological Services chose to ignore, like say at the top of the hill in regard to sensitive elk and mule deer habitat? I'm all for a viable Snow King but how far does the public need to bend over backward for a private enterprise? If the Forest Service won't moderate this development it's going to be up to us....because goodness knows Snow King hasn't shown much interest in restraint.