The owner of the Hoback RV Park has been sent notices of violation from Teton County and the Wyoming Department of Environmental Quality over concerns of a failing septic system that abuts the Snake River.

William Rode has a nickname for the southern reach of Teton County he calls home: Hoback Junk-tion.

But the 71-year-old longtime Hoback Junction resident is only joking when he uses that term, and he was miffed to learn that a commercial septic system abutting the Snake River was failing — and had been for months.

“There has been raw sewage running out of that sewer plant that they had there, because it’s over capacity, and it was done illegally without permits,” Rode told the News&Guide. “I, as a resident, am pissed off at the county for doing nothing.”

Rode has written county commissioners twice this year, asking them to take corrective action. He heard about the troubled septic system months ago while chatting with neighbors at the Hoback Market.

“People who lived there were afraid to complain to the owners,” he said, “because of fear for being kicked out, is my understanding.”

The owner and operator of the failing septic system, located at the Hoback RV Park, has since been sent notices of violation from Teton County and the Wyoming Department of Environmental Quality. 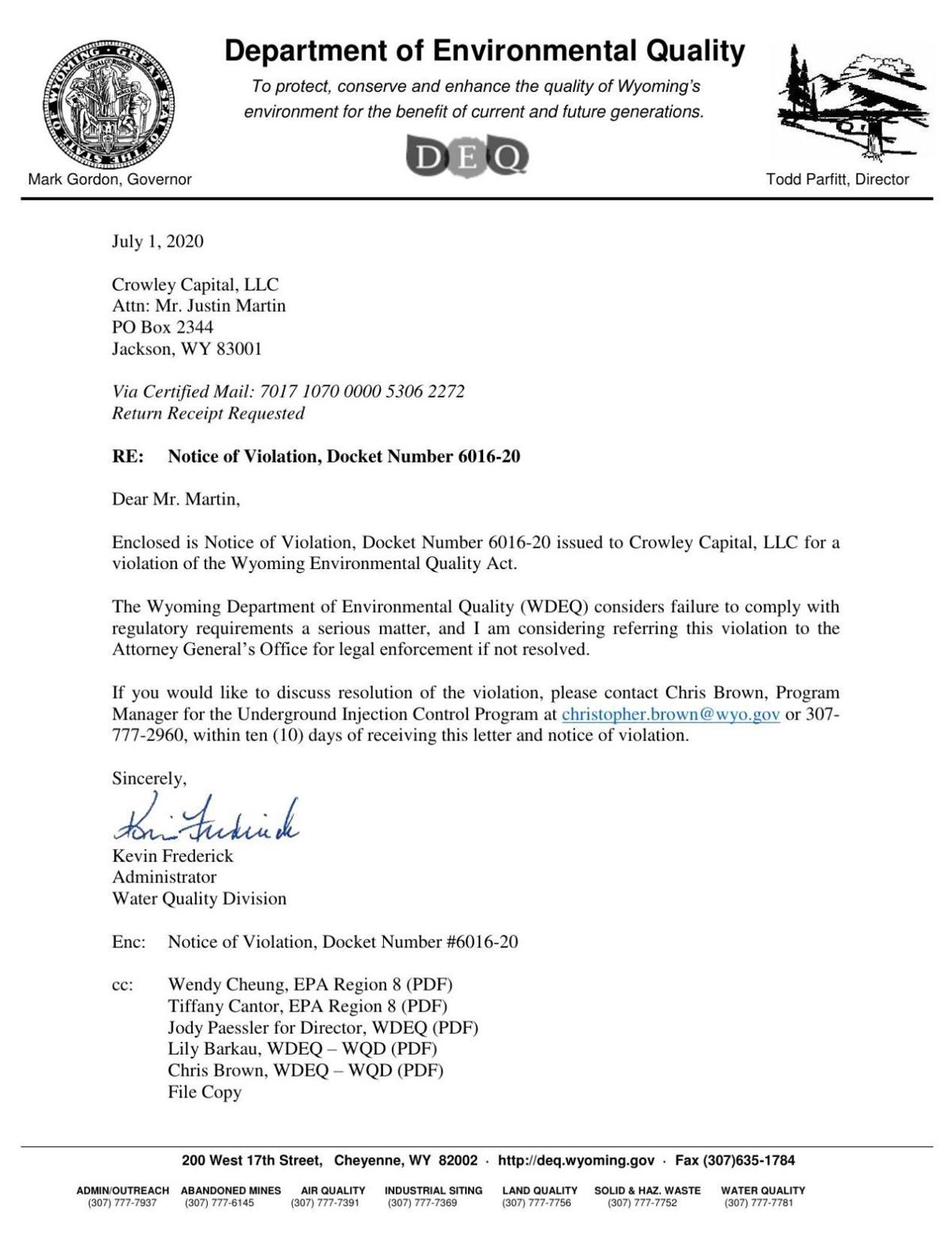 The DEQ’s notice, dated July 1, faults the RV Park’s owner, Crowley Capital, for violations of the Wyoming Environmental Quality Act: for discharging more sewage than is permitted (1,950 gallons per day), for operating the septic system with liquid waste on the ground surface, for adding wastewater treatment equipment without permits and for discharging “water treatment brine” without a permit.

Teton County issued its own letter detailing the same violations listed by the DEQ plus an additional allegation. A “significant portion” of the leach field tied to the failing septic system, county sanitarian Ted Van Holland wrote, was improperly located to the west on an adjacent property, whose ownership is unclear.

“Our experience suggests that there are no simple solutions to address these multiple, significant wastewater system problems,” Van Holland wrote, “so I encourage you to contact me to arrange a meeting where we can discuss how and when compliance can be regained.”

Teton County’s Public Works director, Heather Overholser, told Rode in an email that staff has since “engaged productively” with the owner.

“Effluent has been surfacing at times, and it is possible that it has gone over the cliff side toward the Snake River,” Overholser wrote. “This was one of the cited violations.”

The Hoback RV Park, which sits on a 2.1-acre lot, is located on the northwest side of the junction, hugged between Bridger-Teton National Forest land and South Highway 89.

Crowley Capital is a limited liability corporation. It is registered to an agent, Justin Martin, who did not respond to the News&Guide’s requests for an interview Monday or Tuesday. 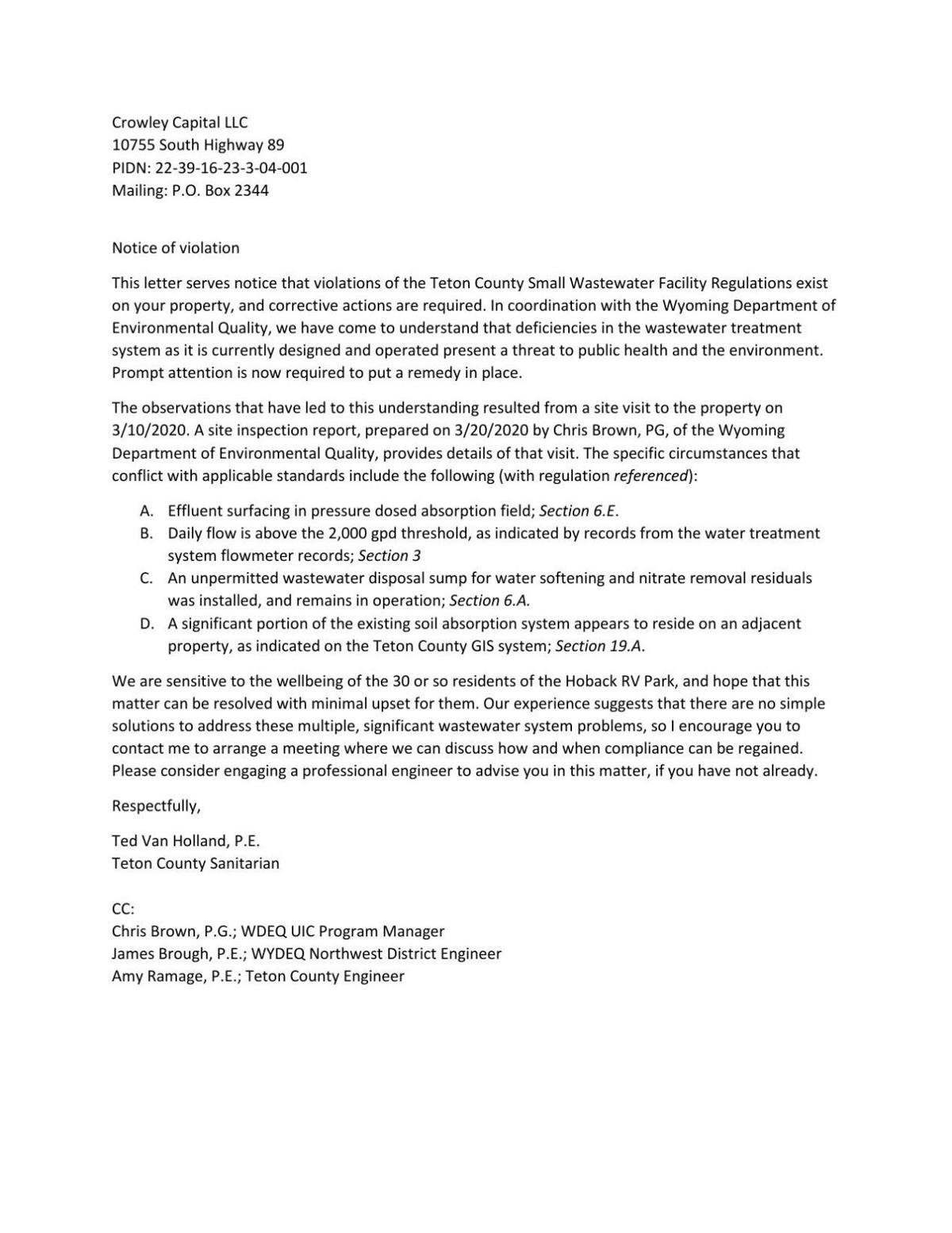 Portions of Hoback Junction have long suffered from poor drinking water quality, and the area is experiencing a long-term rise in nitrates in groundwater, which poses a health hazard to residents who depend on well water. Teton County recently orchestrated a stakeholder process that culminated in a recommendation that Hoback residents form some type of water district, which could lead to funding and a long-term safe drinking water source.

The suspected cause of Hoback’s degraded drinking water is a high density of septic systems overlying an aquifer that doesn’t recharge quickly enough, though state environmental regulators have launched an investigation to pinpoint the cause.

It was the Wyoming Outdoor Council’s senior conservation advocate, Dan Heilig, who urged the DEQ to take a look at the Hoback RV Park last winter. While perusing permits and records for septic systems throughout the county, he noticed that the commercial facility lacked permits to discharge the volume of sewage it was. Small septic systems that discharge less than 2,000 gallons a day are permitted at the county level, but larger systems designed to handle more daily sewage fall under the DEQ’s jurisdiction, and they are more closely regulated and monitored.

Responding to Heilig’s letter seeking an investigation, DEQ staffers Chris Brown and James Brough inspected the Hoback RV Park on March 10, according to the state’s violation notice. They checked metered water flow readings and saw that in the two preceding days the system had exceeded its permitted cap of 1,950 gallons per day, albeit slightly. They observed sewage on the ground, and also noted an “ion exchange water treatment system” that had been built and was discharging brine water without permits.

Rode, the Hoback local, said he’s “very frustrated” that the park’s owner got a pass for so long. The duration of noncompliance and use of the property to house permanent residents, he suspected, was related to the location: Hoback Junction.

“All the s--- that they won’t allow in the beautiful parts of Teton County, they’re pushing down here,” Rode said. “And I mean that literally with what’s going on with the sewage plant.”