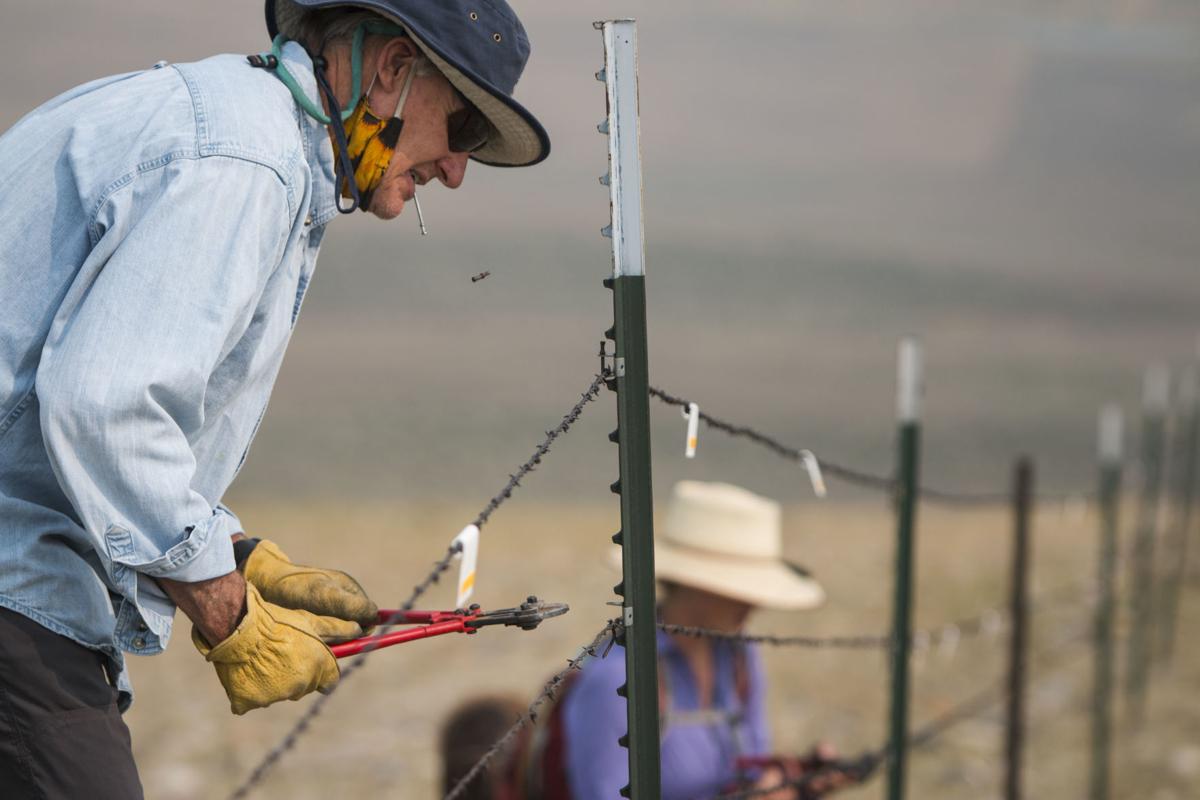 A broken nailhead flies through the air as Martin Hudson, a retired Bureau of Land Management employee, cuts through old nails to free the barbed wire and lower the fence Friday morning on Cora Butte near Pinedale. Ahead of him, Renee Seidler, executive director of the Jackson Hole Wildlife Foundation, works to add brackets to the bottom of the fence posts for the lowered barbed wire to be placed. The crew lowered the fence to protect wildlife in the area during the winter months. Many sage grouse fly into this fence, and fences like it, every year and are either seriously injured or killed. 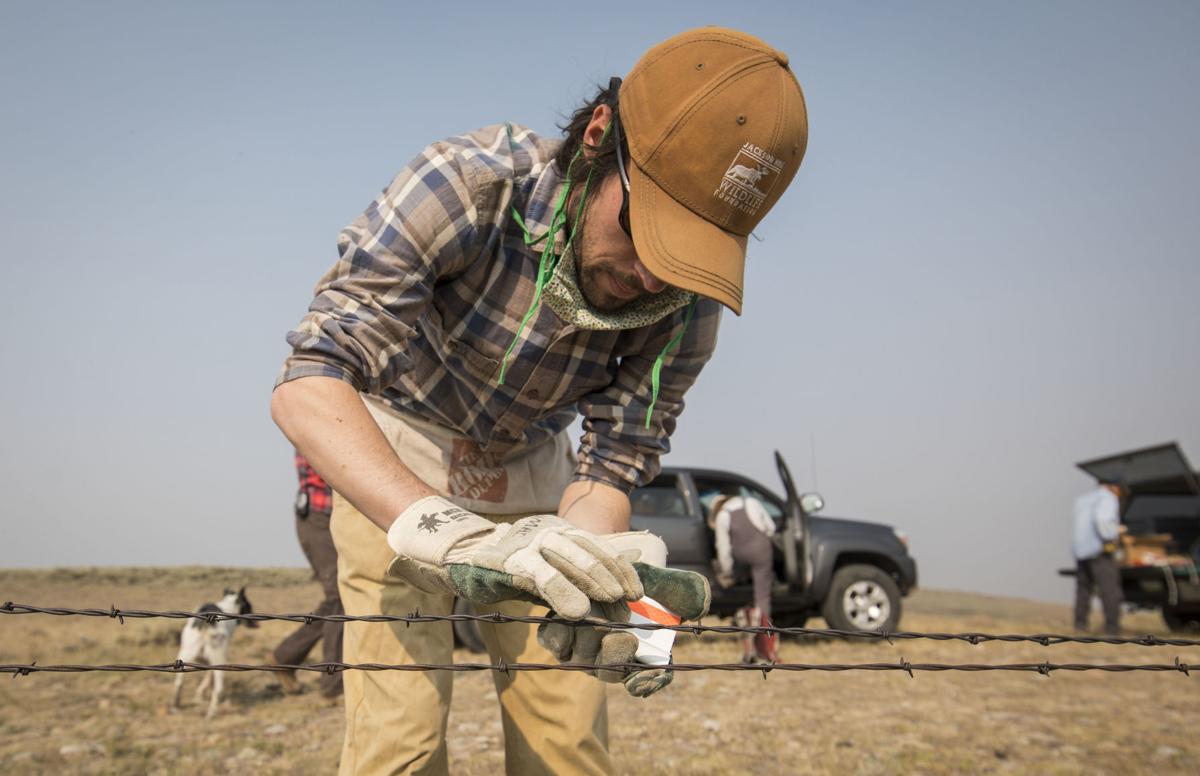 Kyle Kissock, communications manager for the Jackson Hole Wildlife Foundation, adds reflectors to the top wire of a livestock fence near Pinedale. The fence work aims to protect grouse, and also deer and pronghorn. 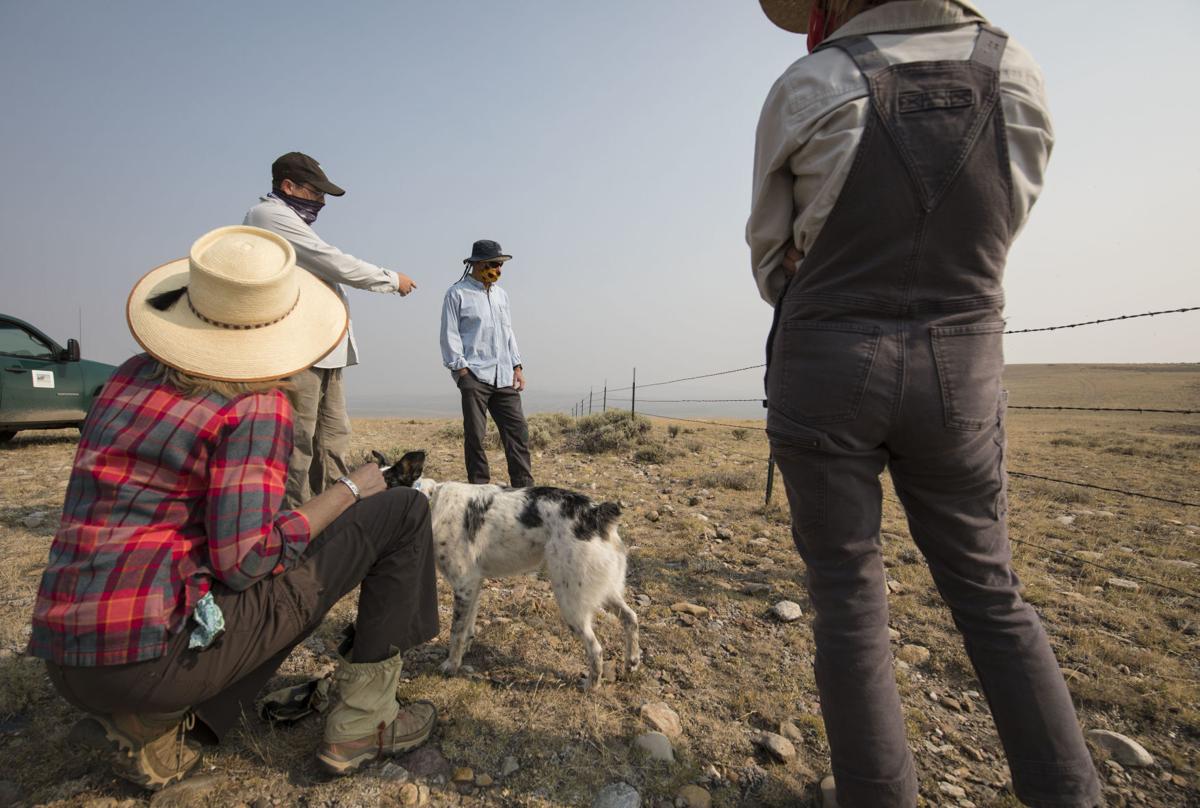 Seidler, Dale Woolwine, Bureau of Land Management wildlife biologist, Hudson and Gersh make a plan before getting to work lowering the barbed-wire fence along a portion of Cora Butte near Pinedale. 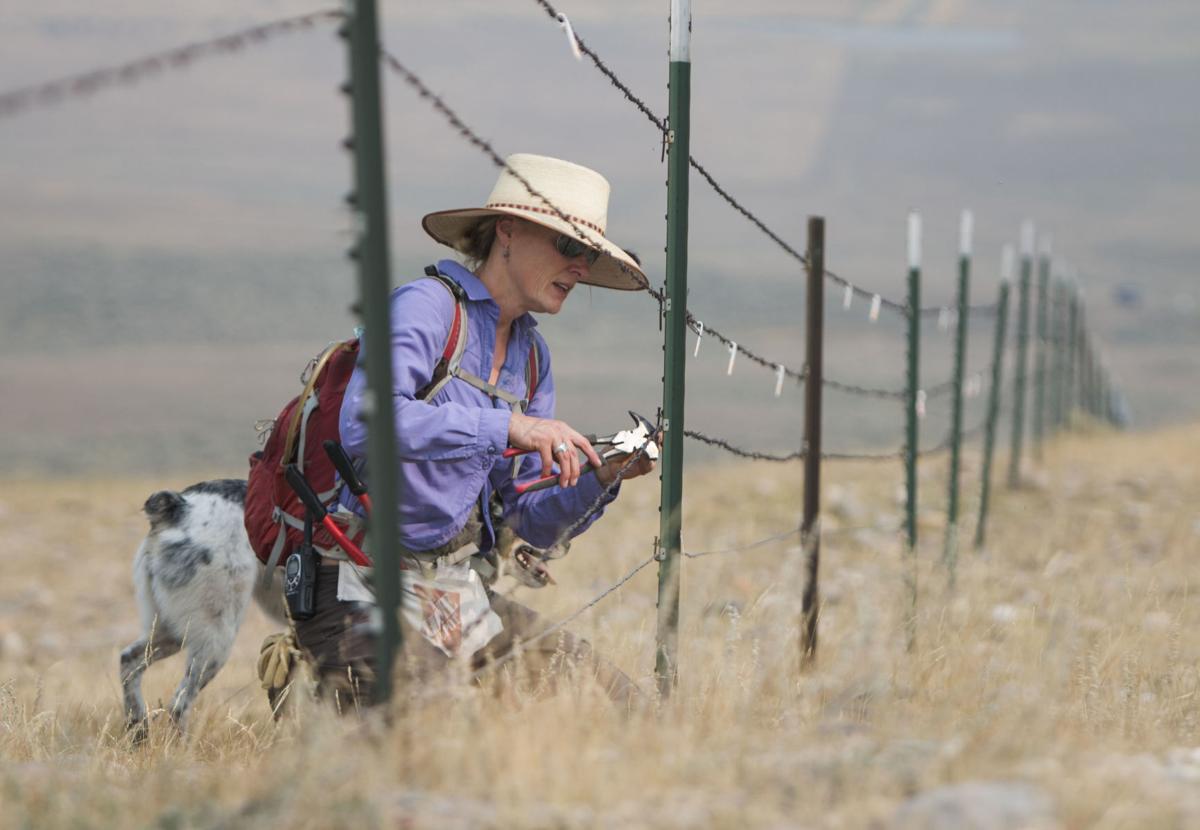 Renee Seidler, executive director of the Jackson Hole Wildlife Foundation, bends nails back to free the barbed wire on the morning of Friday, Aug. 21, while working in Pinedale to lower the fence for the winter season. A crew of five JHWF and Bureau of Land Management staff worked all day to lower the fence which was about two miles long in an effort to protect local wildlife. 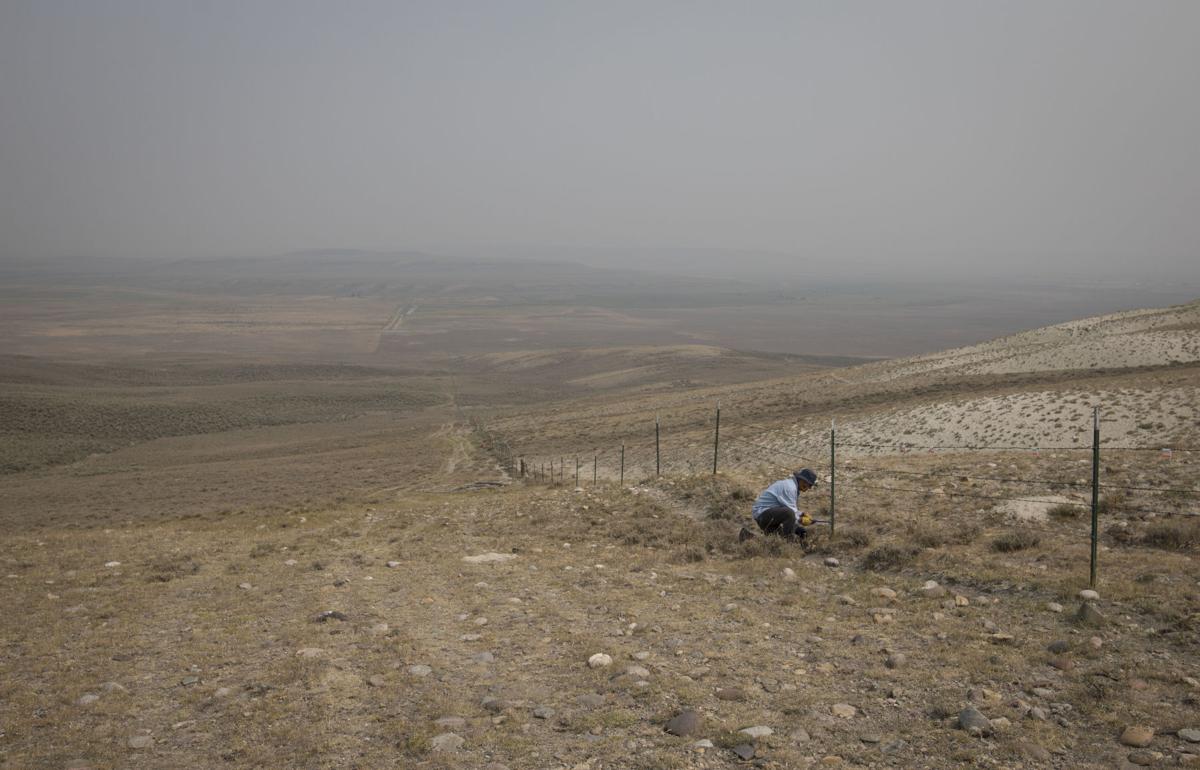 Martin Hudson, a retired Bureau of Land Management employee now working with the JHWF, works his way down the barbed wire fence on Cora Butte near Pinedale, removing nails, adding new brackets and lowering the fence for the winter Friday morning. Hudson and four others lowered the fence to help protect wildlife in the area during the winter months. Many sage grouse fly into this fence, and fences like it, every year and are either seriously injured or killed. 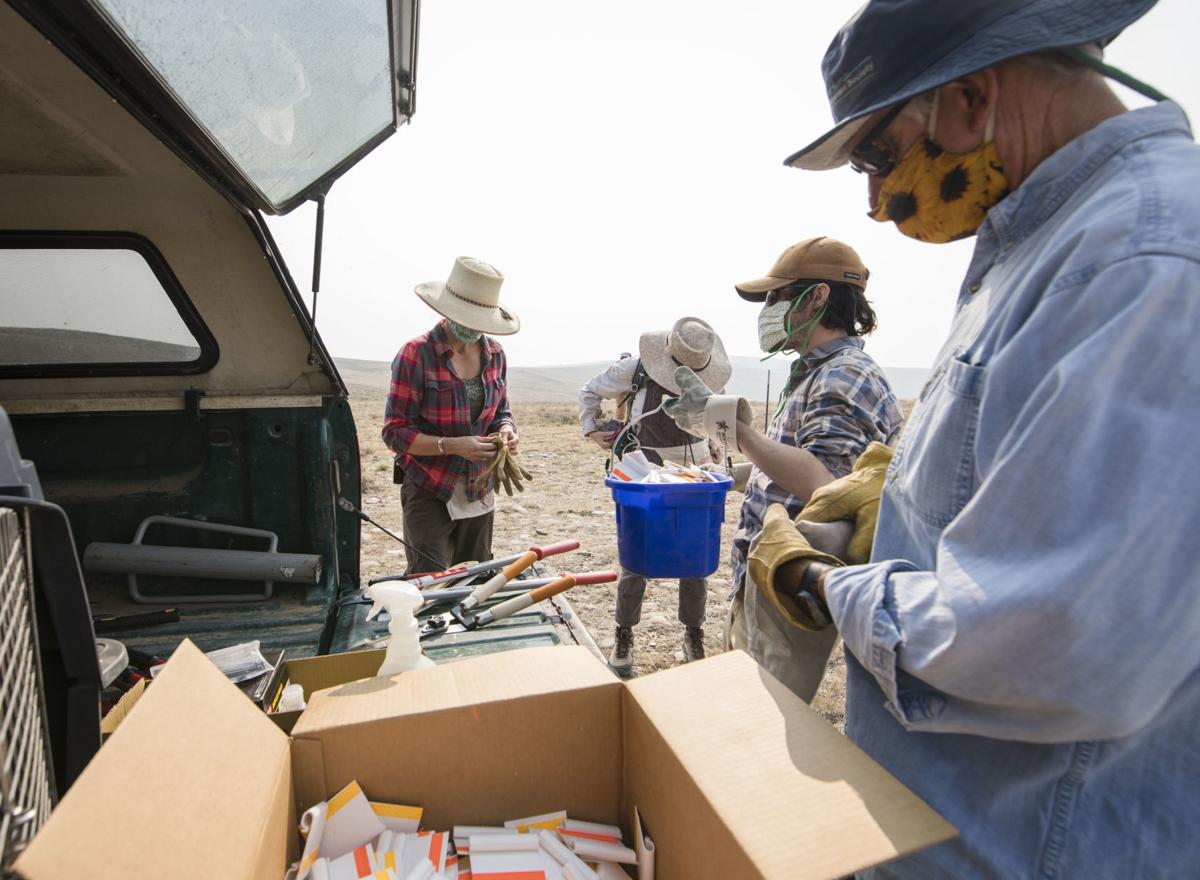 Seidler, Kate Gersh, Kissock, and Martin Hudson, a retired Bureau of Land Management employee working with the Wildlife Foundation, gather supplies before heading out along the nearly 2-mile barbed-wire fence.

CORA — Until he saw it with his own eyes, Dale Woolwine was skeptical that barbed-wire fences could be all that perilous for sage grouse.

Woolwine, a biologist for the Bureau of Land Management, works on a landscape where omnipresent fences divvy up the landscape into pasture systems that Sublette County’s cattlemen and woolgrowers run livestock on. Sage grouse are everywhere in the Green River basin, too, and this is one part of the country where barbwire is sometimes retrofitted with reflective markers to prevent the imperiled low-flying birds from flying into fences.

Research has found that reflective markers are anywhere from 50% to 80% effective, which means many sage grouse strikes and deaths are being averted. Yet even those reflectors aren’t a surefire way to avoid collisions.

“There are some places where, with markers, we are still seeing a lot of collisions,” Woolwine said. “There’s one fence that we’ve seen 99 collisions in one calendar year — with markers.”

That 4-mile fence line, he explained, is located near the south end of the BLM’s Pinedale Field Office, toward Farson.

Last Friday Woolwine, BLM retiree Martin Hudson and the entire staff of the Jackson Hole Wildlife Foundation labored along the northern slopes of Cora Butte to do the chicken-sized birds better. Their task was to not only snap three reflective markers between each T-post so the strands would be more visible for sage grouse, but also to temporarily drop down 2 miles of fence line that’s used for cattle only about a month each late spring. The rest of the year the four strands of barbwire are an obstacle for wildlife, and Daniel-area rancher Fred Pape, whose cattle graze the area, is all for doing away with them.

“I think it’s a good thing,” Pape told the News&Guide. “As long as the fence keeps our cows in, then we’re all for making it wildlife-friendly.

“Like my grandpa always said,” he said, “wildlife were here before we were.”

The fence line where Woolwine and his nonprofit partners worked last week was chosen strategically by the BLM, and was actually already modified using a pot of money that’s intended to mitigate harm the Jonah natural gas field did to wildlife within its confines by benefiting the same species elsewhere. Some $1 million was allocated by the Jonah Interagency Office back in 2008 to identify, modify and remove fences that intersected with the “Path of the Pronghorn” — a route traveled by animals that summer in Jackson Hole. As a result of that work the bottom wire on the Cora Butte fence the team worked on was already swapped out with a smooth strand and raised so pronghorn could scooch underneath it.

The next step is dropping the fence to the ground seasonally. It’s a time-consuming task, but it will help ensure the hillside remains passable for pronghorn.

In 2019 the Jackson Hole Wildlife Foundation got involved with Sublette County fences, making use of $50,000 in mitigation funds from the Jonah Interagency Office. The project called for modifying a dozen miles of fence in Sublette County sagebrush steppe habitat, using different strike deterrent methods — and then monitoring how effective the different changes are.

Besides the drop fence — like the one on Cora Butte — other strategies include adding a wooden top rail, painting markers black to contrast with the snow, and adding black or white PVC pipe to top wires. They’re partnering with the Teton Raptor Center research director Bryan Bedrosian to determine what works best.

Monitoring will entail walking fence lines to look for sage grouse feathers that tell of a strike, and looking for their carcasses. Come winter and spring the foundation’s staff and its volunteers will head out to survey 5 miles of fence twice a week.

Kyle Kissock, the foundation’s communications manager, was among the those working to add reflective panels and drop the Cora Butte fence Friday. He’s seen the casualties up close.

“The last fence we worked on, we did 2 miles of modifications and there were four carcasses on the ground,” Kissock said. “Some of the carcasses had probably been there for months and weren’t fresh, but anybody who spends that time along these fences is going to notice carcasses, especially in areas where there’s high sage grouse density.”

Not all collisions with the taut, hard-to-see wires are fatal.

Not every fence line in the sage-strewn high desert is a problem for sage grouse, Woolwine emphasized. But those that cut by leks or are located where lots of birds raise their broods can be deadly. The Cora Butte fence line used for the Pape cattle hasn’t been carefully monitored yet, but it has “all the factors” suggesting fastening it to the ground until the cattle are herded back next spring will help grouse, he said.

“We’ve got one of the biggest leks that we know about right down the hill,” Woolwine said.

The posts holding the wires up — skinny, steel T-shaped posts — are also harder for sage grouse to see compared with wooden posts. All of the surrounding hillsides and sagebrush-covered bottoms are nesting and brood rearing habitat for grouse, he said. It’s an added benefit that migratory pronghorn and mule deer use the area.

“This is for grouse,” Woolwine said, “but it’ll also help big game.”