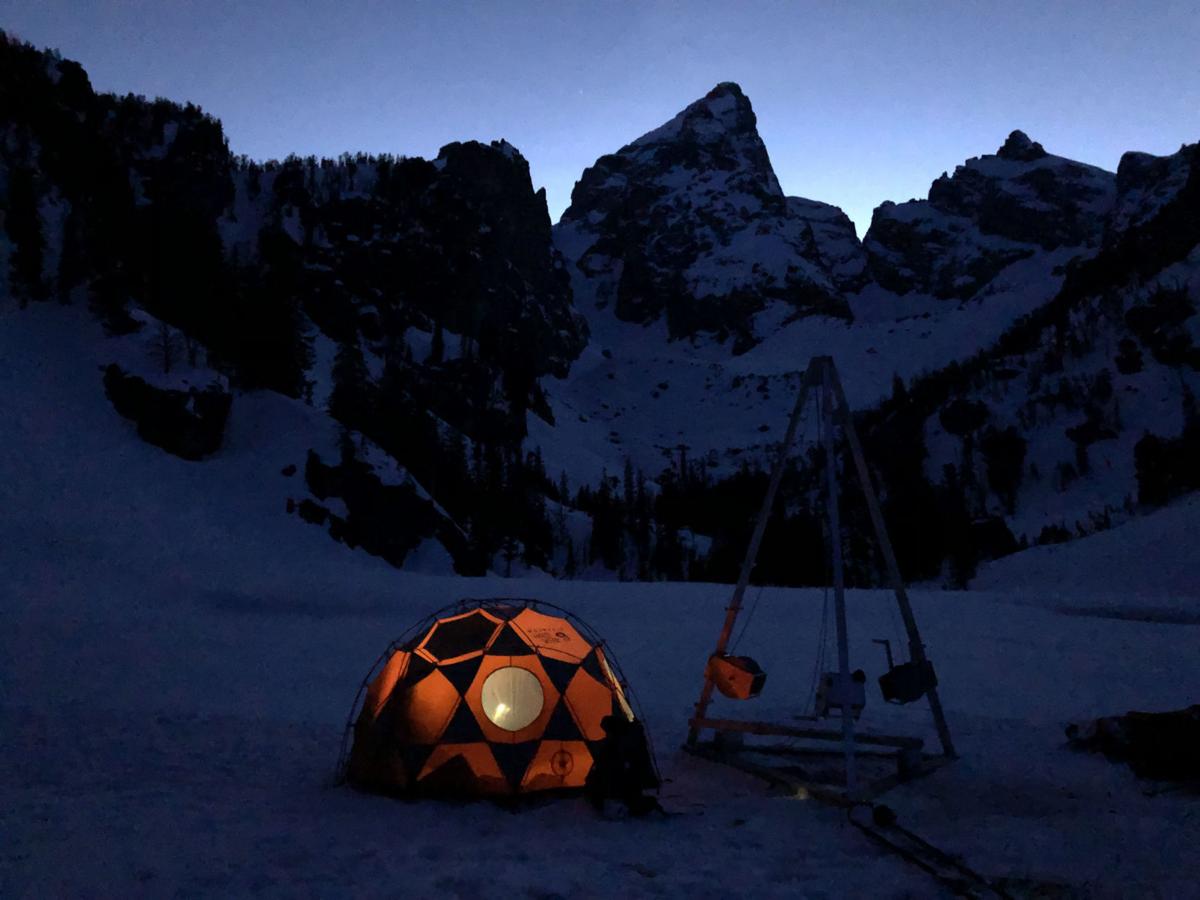 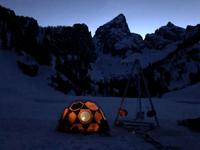 Evening sets in at camp on the frozen surface of Delta Lake below the Grand Teton and Teton Glacier moraine. 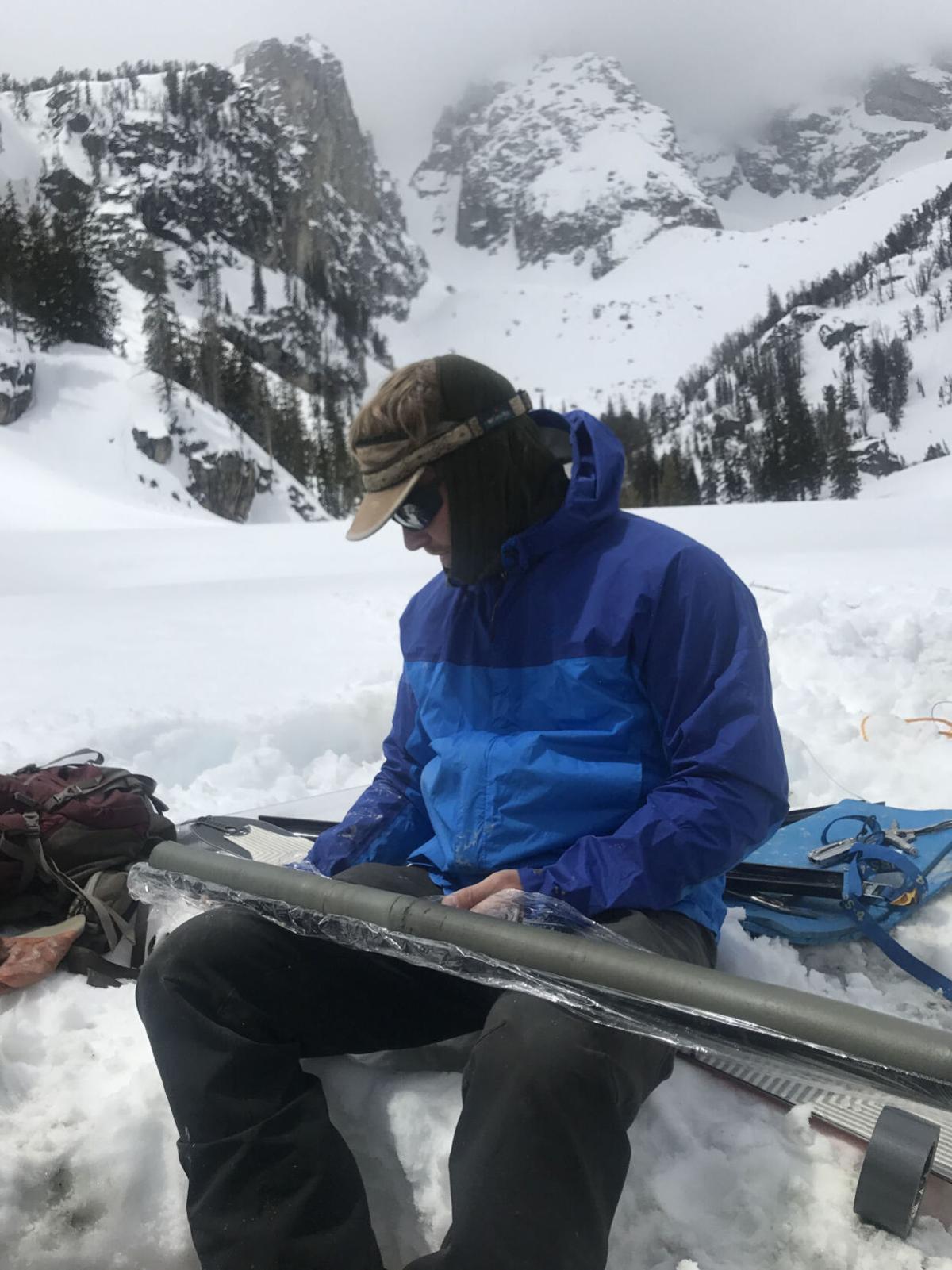 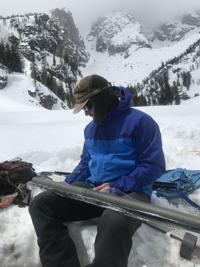 The team establishes a coring site on Delta Lake after a fresh snowfall. Much of the lake coring was performed in late spring from the stable frozen lake surface.

When Darren Larsen pushed off in a packraft into Delta Lake four years ago he expected that he would probe down a few feet into sediment produced by seven or so centuries of glacial runoff.

His metal probe, instead, kept sinking and sinking. The paleoclimatologist and Occidental College professor was after the deposited sludge and silt to let him understand the Teton Glacier, which grinds over the gneiss and pulses sediment-laden meltwater into Delta Lake each spring and summer. It amasses in layers under the emerald waters, hinting at the history of glacial activity in aptly named Glacier Gulch.

“If you went to the visitor center in Moose, there’s a little display on the Tetons’ glaciers, and it says that these glaciers are basically Little Ice Age features,” Larsen told the News&Guide. “It says they’re basically formed in the last few centuries, and they’re going to disappear in the face of modern warming in the 21st Century — and, of course, they are all retreating.”

That was the presumption when Larsen and his geologist colleagues started probing into Delta Lake in 2016. The Teton and Dike glaciers overhead, they believed, had been around roughly since the Little Ice Age cooling period set in the 14th century, and the sediment they had produced since then wouldn’t be too tricky too collect.

“It’s just a small pond, and so I thought it would be pretty manageable,” Larsen said. “But it was more sediment than we could recover using the packrafts.”

Skinning up to the same spot on skis the next spring, they set up on a more stable surface: ice. The scientists then augured through Delta Lake’s frozen surface and then continued coring down into the sediment to finish the job.

“We collected over 12 meters of vertical sediment,” Larsen said. “We’ve dated it and we know that 40 feet of sediment represents about 11,000 years of time.”

The evidence suggests that the Teton Glacier is a relic from when Pleistocene glaciers covered Jackson Hole — all of it, except for the high peaks.

That’s exciting news for glacier advocates and glacier-dwelling organisms, because it suggests that the Tetons’ 11 glaciers and perhaps glaciers elsewhere in the Northern Rockies have been more resilient to past periods of global warming than previously believed. In some form, Larsen found, the Teton Glacier — the range’s largest — had persisted through many, many millennium, including times when the climate was warmer than it is today. Potentially, that resilience could repeat.

“As glaciologists are considering the fate of glacier systems worldwide, one of the hypotheses we’re pointing toward is that these glaciers are of course going to retreat as conditions get warmer,” Larsen said. “But to what extent? Are they going to absolutely disappear, like they did from many of the valleys in the Tetons that don’t harbor glaciers? Or are they going to retreat into more dormant states, or with debris cover?”

When mountain glaciers stop moving, eventually the natural processes of erosion and deposition can cover them up, even entirely. When subterranean they’re considered “rock glaciers,” blanketed by debris that provides a layer of insulation that guard against melting. Even though they’re not visible, rock glaciers and their icy seep outflows still provide some of the ecosystem services as their surface-dwelling counterparts.

Unrelated Teton Range research, for example, has found that presentday outflows from rock glaciers support cold-adapted microbes that have adapted to high-elevation streams. In the future, even if surface glaciers disappear, those seeps could function as a “climate refugia” for the web of life endemic to glacial runoff.

Larsen’s research reconstructing the Tetons’ glacial history builds on some of those findings because it shows that the Teton Glacier, at least, never disappeared entirely, but rather converted to a rock glacier. Along with Occidental College colleague Aria Blumm and University of Colorado Institute of Arctic and Alpine Research scientist Sarah Crump, he recently wrote of the discovery in the pages of the American Association for the Advancement of Science’s open–access journal, Science Advances. A copy of the paper is attached to the online version of this story at JHNewsAndGuide.com.

During the warmest stretch of the Holocene the scientists suspect that Teton Glacier persisted only as a rock glacier. At the time, between 10,000 and 6,300 years ago, there was limited sediment accumulation in Delta Lake that suggests a reduction in meltwater coming from the cirque above. The climate at that time is “analogous to where we’re headed,” Larsen said. Since then the glacier gradually grew, according to their data, although in recent decades it’s starting to shrink as a result of climate change-sprung greenhouse gasses like carbon dioxide produced by humankind’s activities.

Grand Teton National Park scientists are gearing up to monitor five of their 11 glaciers for the long haul: the Teton, Schoolroom, Falling Ice, Petersen and Middle Teton glaciers. Seasonal fluctuations and melt are being recorded, as are estimations of their mass.

Expected changes for those glaciers and others around the world the remainder of the 21st century are for more melting and continued declines in volume. That’s the forecast of the Intergovernmental Panel on Climate Change, whose special report on the ocean and cryosphere predicts that the world’s glaciers will decrease in mass between 22% and 57% by 2100, depending on the climate change scenario.

Wilson resident Gary Kofinas, a lead author of that report, said that just because glaciers like the Teton were resilient and able to convert into rock glaciers in the past does not promise their persistence into the future. 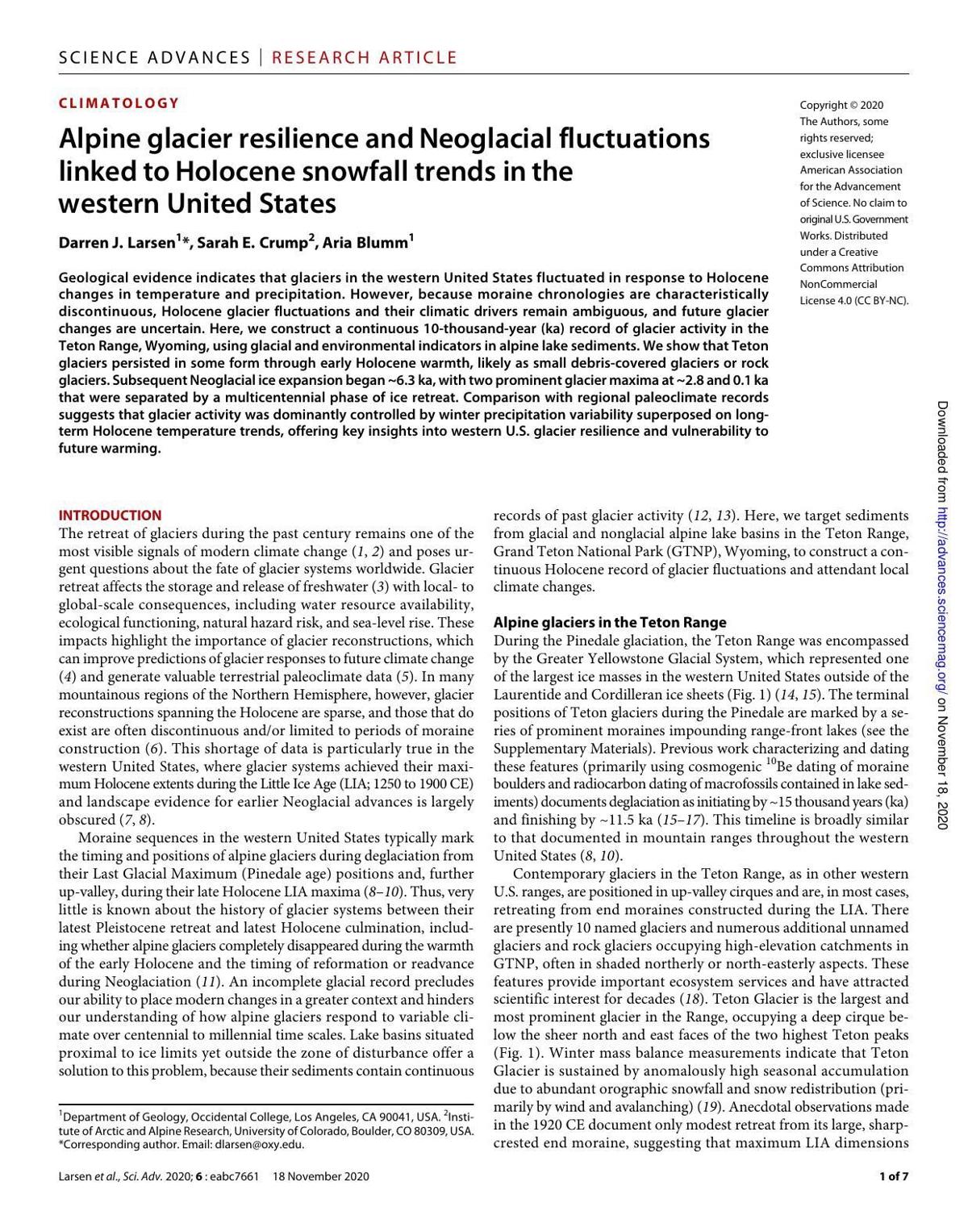 “One of the things we don’t know is whether or not these systems will hit critical thresholds,” Kofinas said. “We don’t just want to sit back on our laurels and think that our glaciers are going to be fine.”

Larsen’s plan, meanwhile, is to even more closely examine the Teton Glacier’s past, part of an effort to understand what’s coming.

“A great goal would be to splice these long-term records with what’s happening in the very present,” he said. “You can demonstrate the changes that happened over the past 10,000 years. We can tie that to present conditions.”

To that end, Larsen plans to spend plenty more time up at Delta Lake and nearby swaths of the Tetons to collect more data. The Teton Range’s glaciers today are surviving the warmth of the 21st century because of the winter, which builds them up seasonally through snowfall, wind-blown snow, avalanches and other forces of nature. Their retractions and growths vary year to year, an imprint and indication of each winter’s severity.

“What we’re excited about is these glaciers appear to be very sensitive to changes in winter precipitation and snowfall,” Larsen said. “Therefore, we can use their fluctuations to evaluate changes in snowpack here in the Tetons during the Holocene. Those changes in winter precipitation may have been related and responding to large-scale climate change and atmospheric dynamics that were rippling out across the western U.S.”

Note: This story has been modified to correct Gary Kofinas' role in preparing an Intergovernmental Panel on Climate Change report.