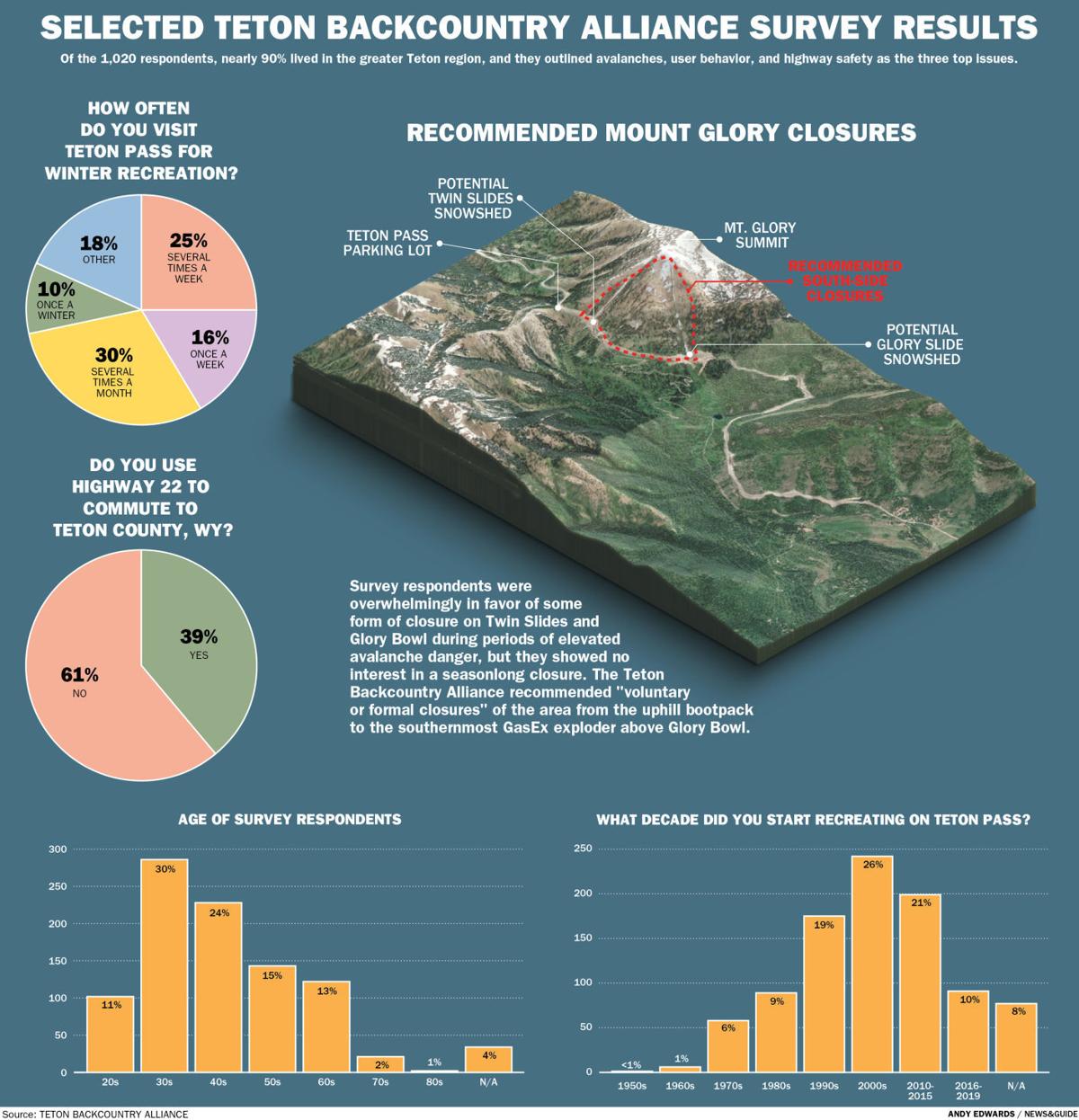 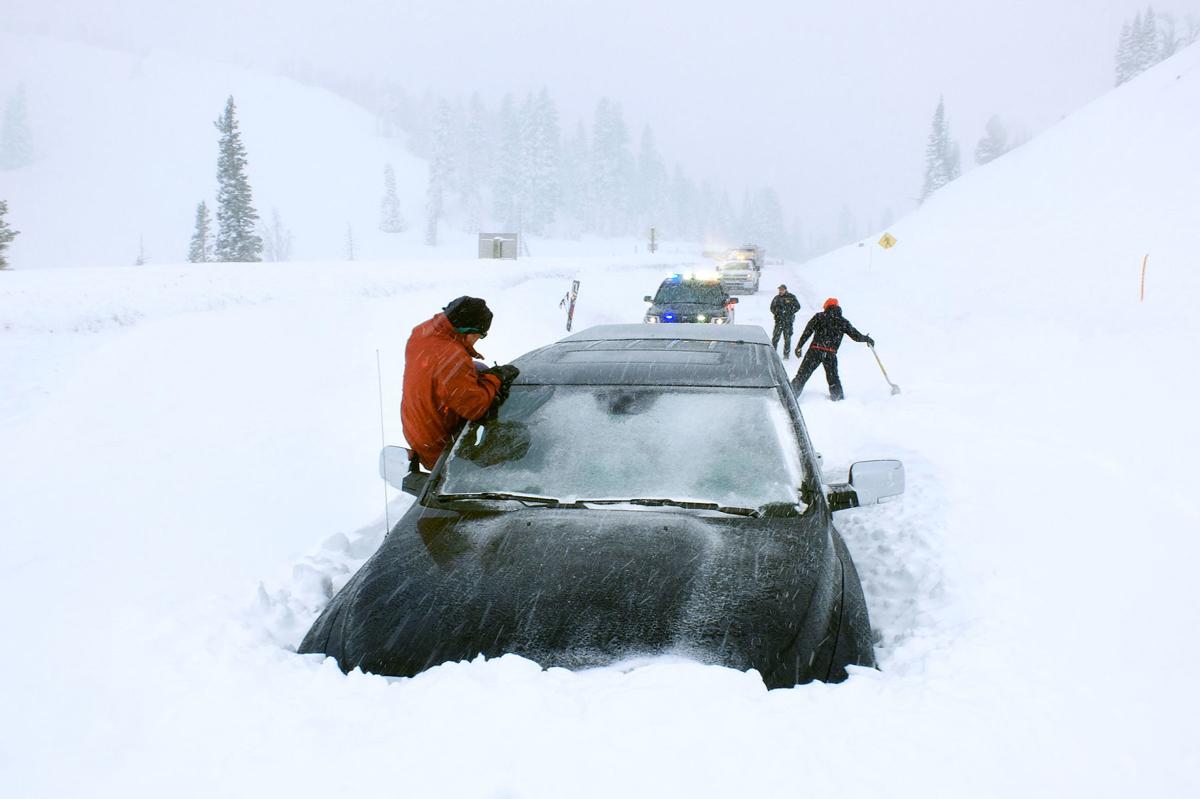 In April 2018 a pair of snowboarders triggered a small slide in front of a motorist on Teton Pass, depositing about four feet of snow onto the highway below and closing the pass for several hours. Respondents of a recent survey said they would be in favor of temporary terrain closures when avalanche danger is high.

In April 2018 a pair of snowboarders triggered a small slide in front of a motorist on Teton Pass, depositing about four feet of snow onto the highway below and closing the pass for several hours. Respondents of a recent survey said they would be in favor of temporary terrain closures when avalanche danger is high.

The results are in from a community survey on Teton Pass winter recreation, and respondents overwhelmingly said they would pay a fee for parking and expand the Teton Pass ambassador program.

But a full-season closure of Twin Slides and Glory Bowl? Hard pass, they said.

More than 1,000 people — 88% living in the greater Teton area — responded to the Teton Backcountry Alliance’s online survey in mid-April. The questions covered demographic information, asked what respondents saw as the predominant issues on the pass and also asked about solutions.

“It was nice to see that people recognize there’s a problem,” said Kim Havell, a guide who sits on the steering committee for the Alliance.

Respondents mentioned three major concerns: avalanches, user behavior — including lack of experience, irresponsible activities and hubris — and highway safety. Several high-profile slides in the past few winters, like the December 2016 one that buried a car, have brought skier impacts on the highway to the fore and rekindled fears that the Wyoming Department of Transportation, which manages Highway 22, would restrict access.

Those fears led to the formation of the Alliance, which has ignited interagency efforts to find long- and short-term solutions to concerns raised by skiers and governmental entities.

“We felt that it’d be helpful to document what are the perspectives of our community, and our community being recreational users,” said Gary Kofinas, chairman of the steering committee.

Kofinas is a resource management professor at the University of Alaska who owns a home in Wilson. Along with steering committee member Tom Turiano and a colleague, he tabulated the survey data and wrote the report the Alliance released Tuesday. In looking at the answers, several solutions enjoyed broad community support.

The most popular short-term solution proffered by the respondents was a sort of closure system for Twin Slides and Glory Bowl, the pair of avalanche paths that overhang the highway, with 237 people mentioning it. Restrictions on recreation when the Bridger-Teton Avalanche Center deems the avalanche danger as considerable or higher were marked as very or somewhat necessary by 87% of people, and 95% said the slopes should be closed during WYDOT’s avalanche mitigation work.

Though the backcountry community seems open to restrictions, cordoning the slopes off for the entire winter was unpopular: Just 31% wanted a full closure, which would be near impossible to enforce. The Alliance recommended that “voluntary or formal closures” be put in place for the area from Twin Slides to Glory Bowl.

Besides the temporary closures, education was seen as the best way to change skier behavior, which Teton Pass Ambassador Jay Pistono sees as evidence of needing to be more forceful with his message.

“You can’t be so polite that your message isn’t effective,” he said. “I’ll be a bit more authoritative when I need to be.”

Pistono favors a sea change in the skiing community. Skiers and snowboarders seem cognizant that they affect highway safety. Because of that self-awareness, he said, they should hold one another accountable and call out negative behavior like loose dogs or reckless skiing.

No matter how much effort is put into creating a local ski culture that comports itself well along the highway corridor, tourists still need to be educated. By Pistono’s estimates roughly one-third of skiers on the pass are from out of town. New signs at the top of the pass that better delineate the high-risk slopes above the highway or other important information have been floated, but without immediate funding for that sort of project, agencies are looking for other means.

“There’s definitely some interest in better online information,” Bridger-Teton National Forest Resource Manager Linda Merigliano said. “I think there are things we can do with social media so that tourists see that information before they go up.”

Merigliano is part of an agency committee that is looking at longer-term solutions. It also includes representatives from WYDOT, Wyoming Highway Patrol, the Caribou-Targhee National Forest, the Teton County Sheriff’s Office and Teton County Search and Rescue. Bridging issues like parking, judging the feasibility of snow sheds, creating a corridor management plan or determining whether someone who violates a closure can be prosecuted (all of which respondents supported) will require a multiagency process that will take time, Merigliano said.

In the interim the report outlined solutions that skiers could undertake right when the snow flies. One option that 71% found very or somewhat necessary was that if drivers find five cars waiting for a spot in the parking lot at the top of the pass, they leave.

Another solution that enjoyed wide support was expanding the ambassador program. Pistono is a regular presence on the pass, and 87% of respondents said they wanted more people like him talking with skiers. However, the Bridger-Teton funds Pistono’s position, and it doesn’t have money to pay more ambassadors. In the meantime he is “counting on that crowd to pick up the mantle.”

The final part of the survey that isn’t in the report is the collection of suggestions for a Teton Pass code of ethics. The report states that 3,066 responses were entered, and Kofinas is still combing through them to find what has broad support. The Alliance hopes to have the code completed before winter, and in Merigliano’s vein of using social media, it will post the code to its website and Facebook page.

All in all, the survey was a fact-finding endeavor that will be part of what guides long-term change on the pass. For this winter, recreation on the pass may look a lot like it has in previous years, which is why agencies and the Alliance are pushing skiers to self-regulate, which is no easy task.

“We basically have to change the culture around skiing on the pass,” Havell said.

I think a closure of the entire south and south east face of Glory is fine during "High" and "Extreme" conditions, but closing during "Considerable" conditions is too cautious. On the other hand I don't have a problem with closing the actual Twin and Glory slide paths all winter until spring conditions exist.

The only reason this access to skiing hasn’t ended is the simple fact that a large part, if not a majority, of the drivers on the pass are immigrants or persons not likely to push in fear of risk related to doing so.

I hope you enjoy the snow.

"the survey was a fact-finding endeavor that will be part of what guides long-term change on the pass" . a thousand people's opinions are not going to shape public policy regarding restricting access to public land. there are no facts in this survey.

that survey sampling is too small to make any policy,thank goodness those skiers don't speak for me

You make two interesting points. First, in order to know if the sample is representative, we would need to know how many BC skiers and boarders are there in our region. And to be honest, I don't have a clue. J suggested 2500 in the immediate area, that's just a guess. But if it is as much as 4000, a sample of 1021 is pretty good for helping to inform (not make) policy. Your second point is also important -- Having a majority of people answering that something is very necessary does not imply that we have full consensus on the matter. Those who disagree need to be heard. Hence, public meetings and other ways of talking about this topic together are important . thanks

FYI: The full report is found at http://tetonbackcountryalliance.org/wp-content/uploads/2019/09/TBCA-2019Survey-FullVersion.pdf