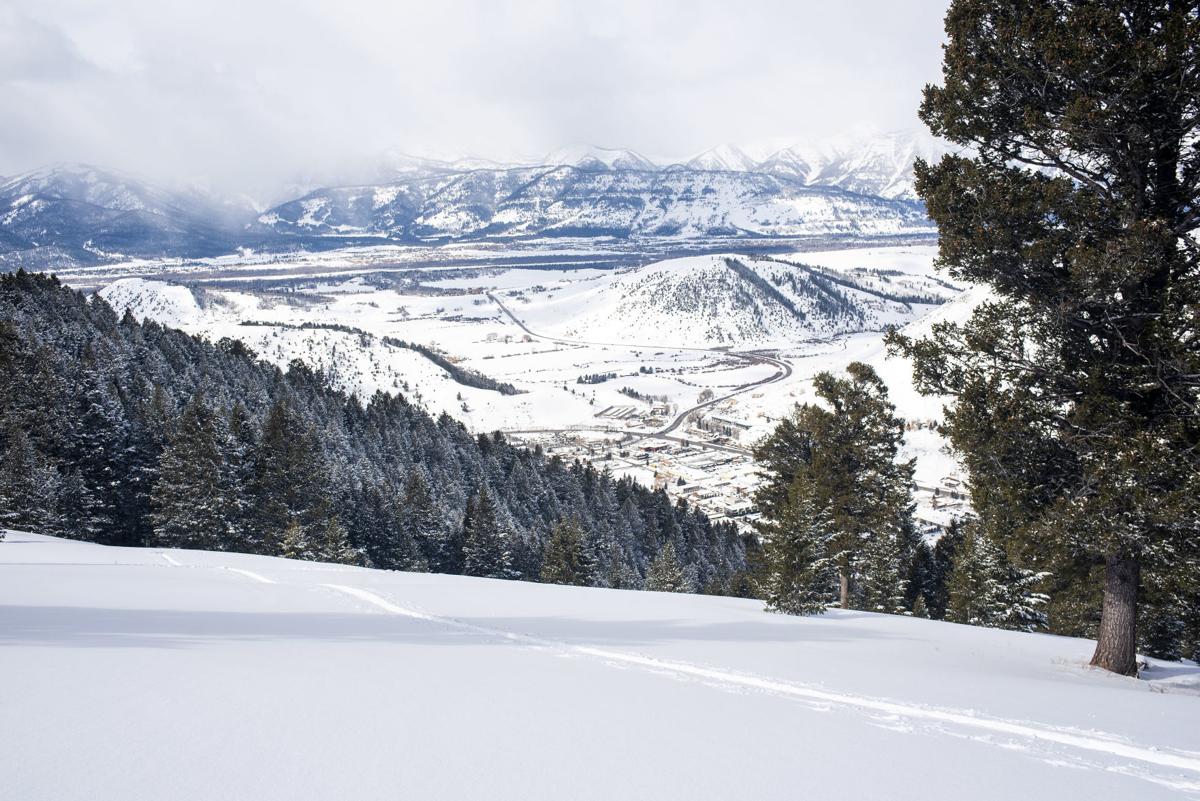 A new maintenance road proposed to the top of Snow King Mountain would bisect an open glade just west of the summit. 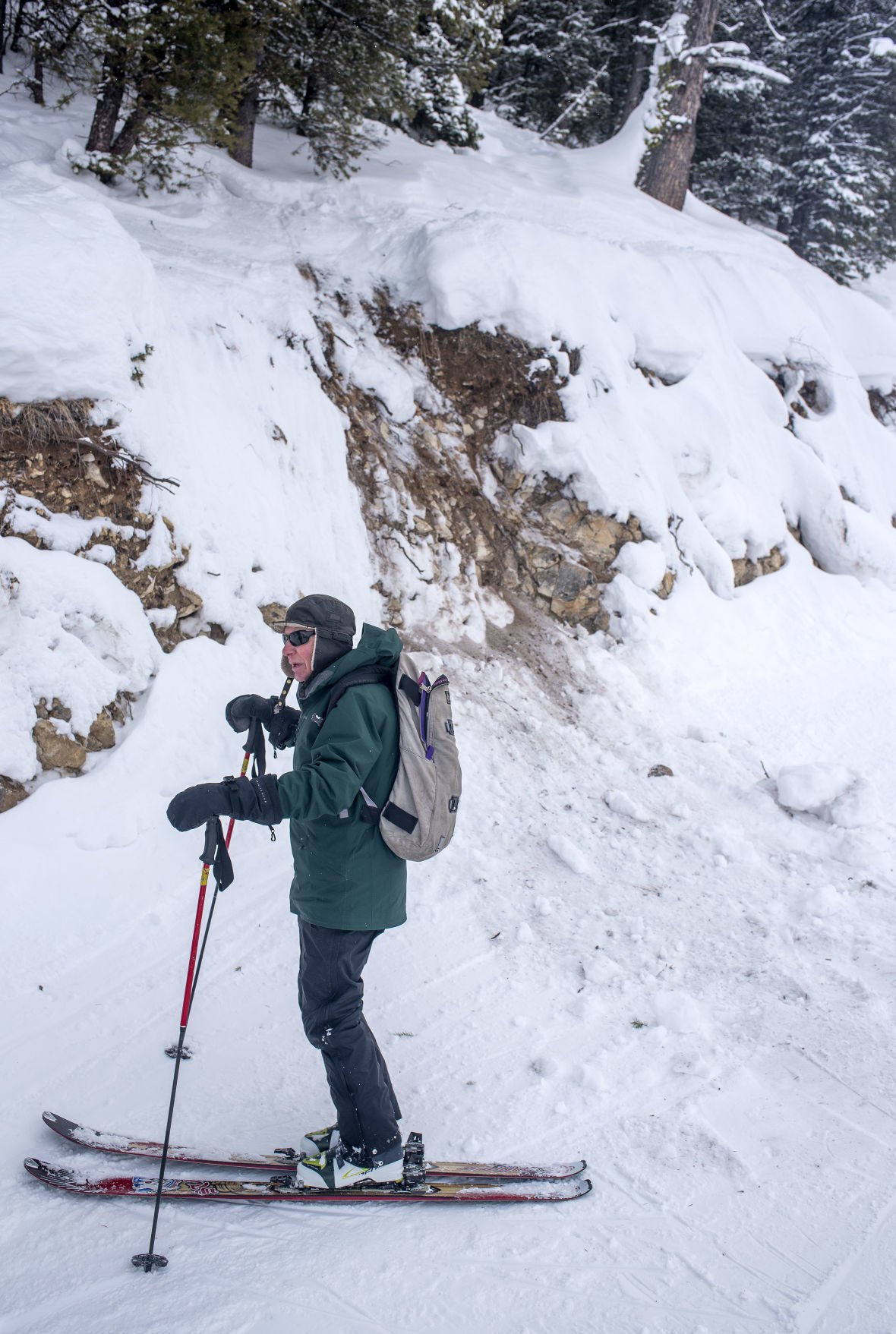 Rod Newcomb stands next to the embankment of the maintenance road on the final switchback to the summit of Snow King Mountain. Newcomb said a new road proposed by the resort would bisect the Elk run and likely have similar steep embankments, which he believes could be dangerous to skiers on the mountain. 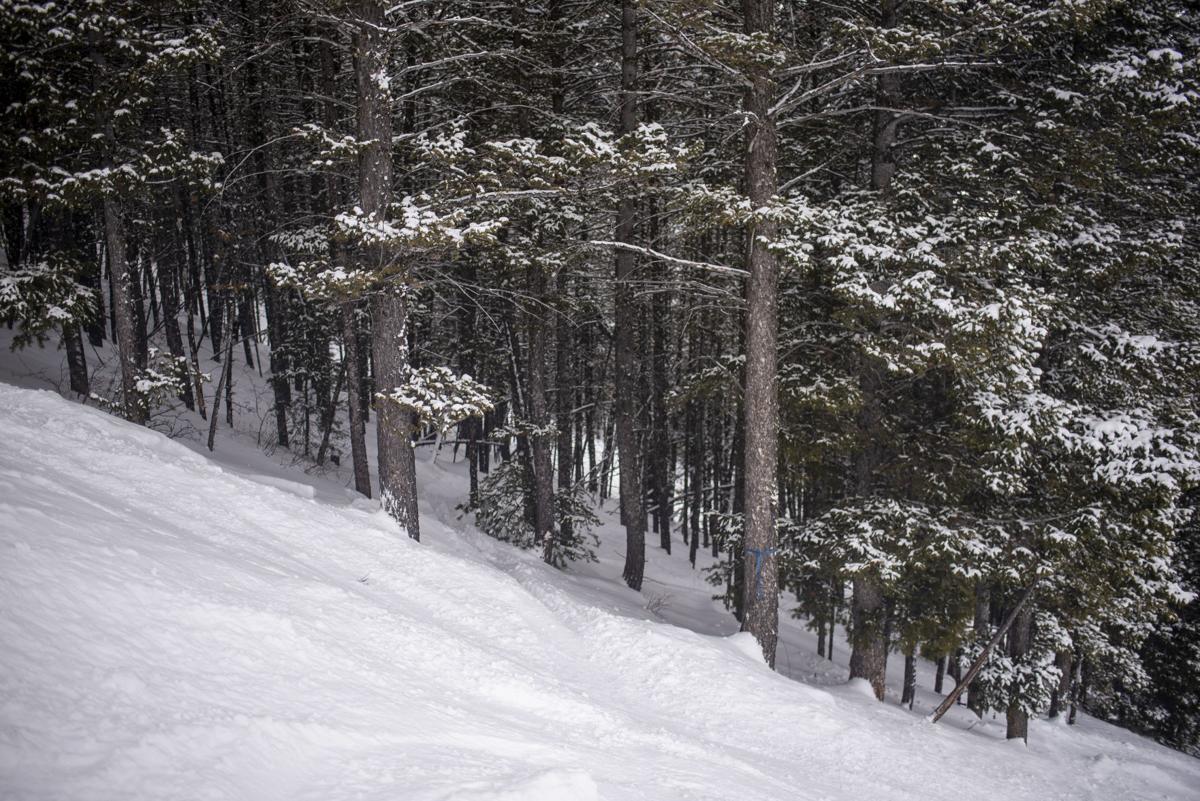 A new maintenance road proposed to the top of Snow King Mountain would bisect the mountain’s Elk run and continue into heavy trees to the east, shown here by the blue flagging.

Rod Newcomb gestured down to an opening in the timber on an untracked powder-covered slope a few hundred yards west of the boundary of Snow King Mountain Resort.

The retired avalanche expert pointed out a blue ribbon, which marks a hypothetical 8% grade road favored by Snow King owners and the Bridger-Teton National Forest. The route, he explained, would continue west toward the crest of Scotty’s Ridge and then switchback up toward the summit.

The idea isn’t a new one.

“This is what [Bill] Briggs called ‘sun slope,’” Newcomb said. “Notice how there’s no trees? Well, he cut them all down.”

Newcomb, whose 85-year-old legs still propel him on skis at a good clip, refers to the route as “Briggs Road,” in honor of the idea born of the legendary skier and longtime ski school teacher. (Briggs didn’t return a phone call requesting comment by press time.) The illegal tree cutting, which dates to the 1970s, wasn’t appreciated, he recalled.

“Briggs had to go before Judge [Bob] Ranck,” Newcomb said, “and Ranck finally told him, ‘You do this again, you’re going to jail.’”

Forty-some years later, a road in the same vicinity is poised to become reality. Its goal remains getting beginner skiers down the mountain, but this time Snow King Resort — instead of one person — is heading the operation and it’s doing so in an above-board manner.

Newcomb, who patrolled at Snow King starting in the winter of 1959-60, has been vocal in his distaste for the idea. He contends its route would sever one of the longest runs on the mountain, Elk, creating a hazard in the process by adding a 6-foot, nearly vertical drop-off on the uphill side of the road cut. Moreover, the longtime snow-safety educator worries that the east and westward expansions — which the new road’s longer route demands — will create a need for significantly more avalanche mitigation work.

Other options to route a road to Snow King’s summit within its existing footprint have been dismissed by the Bridger-Teton National Forest. Much of Snow King Resort sits on land leased from the national forest.

Newcomb wasn’t alone in asking for a blueprint for Snow King that doesn’t depart so far from what exists today. The town of Jackson was on a similar page.

A “no-action” alternative, required in National Environmental Policy Act reviews, was a part of the draft EIS that the forest released the last day of January. But the request for an option keeping Snow King confined to its current footprint was tossed out, added to a list of ideas considered, but not analyzed in depth.

Sean McGinness, who administers ski areas for the Bridger-Teton and Caribou-Targhee national forests, said keeping Snow King in its current boundaries isn’t a part of the plans because the project’s “purpose and need” would be compromised.

“We seriously considered it, but the challenge was a summit access road,” McGinness said. “If you keep it within the existing boundary, you just add more switchbacks.”

The “needs” to achieve the goals of the Snow King overhaul are listed in the forest’s planning document. They are: improving and increasing beginner and intermediate terrain to lure new skiers, expanding snowmaking, adding high-quality guest facilities and an event venue, and providing access to a wide range of year-round activities for tourists.

Moreover, the Forest Service’s equivalent of zoning for the greater Snow King area demand that recreation be given precedence, McGinness explained. The landscape south and east of Jackson around the ski area is classified as “special use recreation.” This classification would have factored in, for example, when the Wyoming Game and Fish Department asked the national forest to not expand infrastructure into Leeks Canyon, which doubles as important wildlife habitat. Of the alternatives on the table, all the options — other than no action — call for new infrastructure, including a ski lift, in Leeks Canyon.

The Bridger-Teton’s guiding land and resource management plan explicitly states that habitat management in “special use recreation” areas is “not intended to meet state wildlife population” or “harvest objectives.”

At least one elected official is also concerned with how forest plans have advanced. Councilor Jim Stanford, in particular, has questioned the lack of variety in the alternatives. In a meeting between the Town Council and McGinness on Tuesday, Stanford argued in favor of Newcomb’s road proposal, saying the alternatives overlook the hazards of sending beginner skiers down a road that crosses multiple steep expert runs and more runs than the existing road.

“I feel that the safety issues were glossed over, not thoroughly addressed here,” Stanford said. “These are not issues I bring up lightly or just to be a pain.”

McGinness countered that “there’s no perfect scenario for where this road goes,” adding that roads at ski areas often have to cross advanced runs. He said it’s difficult to assess the safety implications of crossing any particular number of runs.

Public comments that pile up between now and the deadline, March 16, will dictate the alternative that the Bridger-Teton ultimately goes with for the road, which is still up in the air, McGinness said. The town of Jackson will be among parties commenting on the draft EIS, which precedes a final version of the document that will come out in tandem with a draft decision.

The Bridger-Teton has not identified a “preferred” option among the four alternatives on the table, but will do so once its final plan is publicized. The likelihood is that the chosen plan will blend elements from the different alternatives, McGinness said.

Snow King officials don’t see what all the fuss is about, when it comes to the longer, less-steep road outside of the current permit area. They also disagree with the safety hazard.

“You’ve got roads like that all over the Village,” Snow King General Manager Ryan Stanley said.

Jeff Golightly, a chief advisor to Snow King owner Max Chapman, pointed out that the ski area hired the “best consultant in the country” to devise its plans, including coming up with the design for the summit road.

“Success is making a sustainable business that can pay its bills and support its employees who live and survive in Jackson,” he said.

Golightly and Stanley said the redevelopment plans, expanded beginner terrain and a new, wider road will all be a win for local families, providing an alternative for parents who nowadays haul their children who are learning to ski to Jackson Hole Mountain Resort.

Newcomb remains convinced that a lower-grade cat track within Snow King’s current boundaries is possible and preferable — and could also be a boon for beginner skiers. He’s drawn a map for a new 10% grade road route that features three switchbacks while avoiding Elk Run.

Snow King and the Bridger-Teton’s preferred road, by contrast, switchbacks just twice within the national forest, once where the road turns back in the Cache Creek drainage past the Ferrin’s avalanche path. The second turn, looping back to the east, is near the summit, not far from where Newcomb toured out of bounds Monday afternoon.

“This is up to the Forest Service,” Newcomb said. “I would hope that they listen to the concerns of some of us old-timers.”

— Cody Cottier contributed to this story.