The Wyoming Department of Environmental Quality has launched an investigation to pin down the source of nitrate pollution in the Hoback Junction area.

Wyoming environmental regulators have launched an investigation into high levels of nitrate in Hoback Junction-area drinking water and are trying to pin down what’s causing a gradual long-term rise in the pollutant.

Residents and water quality experts have long surmised that a high density of septic systems where the underlying aquifer recharges slowly have fed a long-term rise in nitrates — pollution that led to one Hoback subdivision to install pricey nitrate-reduction technology to ensure safe drinking water. The connection has long been presumed but lacked firm evidence backing it up. Still, people like Teton Conservation District staffer Carlin Girard, who has kept close tabs on the Hoback water issue, are anticipating that the Wyoming Department of Environmental Quality’s underway investigation will confirm long-held hunches.

“I think that the majority of evidence points toward wastewater, and I think that when that’s the case it’s likely a well-executed and designed study will likely point toward wastewater,” Girard told the News&Guide. “We just don’t have strong data to say that at this point, but it is inferred.”

Wyoming DEQ officials were unavailable for an interview Tuesday, but the state agency publicized its probe of the groundwater pollution in southern Teton County in a mid-June letter mailed to Wyoming Outdoor Council senior conservation advocate Dan Heilig, who had requested an investigation.

“The Water Quality Division has already begun an investigation in the area by collecting available water quality data and compiling that data together with information on private and public water supply wells, geology, hydrogeology and potential sources of contamination,” the letter to Heilig says. “Based on the results of the results of this effort DEQ will proceed with any necessary response actions that are appropriate and consistent with its statutory and regulatory responsibilities.”

While the connection between nitrates and wastewater has remained clouded, data from public drinking water systems where nitrates must be tested shows that there have been statistically significant increases over time. Nitrates in drinking water is particularly worrisome — and the U.S. Environmental Protection Agency caps safe concentrations at 10 milligrams per liter — because consumption by pregnant women and infants can lead to methemoglobinemia, or blue baby syndrome, a sometimes-lethal condition that inhibits oxygen’s ability to travel through blood. Three decades of monitoring nitrate levels in the Hoback-area J-W subdivision found that the contaminant increased from 2 milligrams per liter to 10 milligrams per liter, right at the EPA’s limit, and in response the 16-lot neighborhood in 2018 paid over $100,000 for a water treatment system to scrub out nitrates. 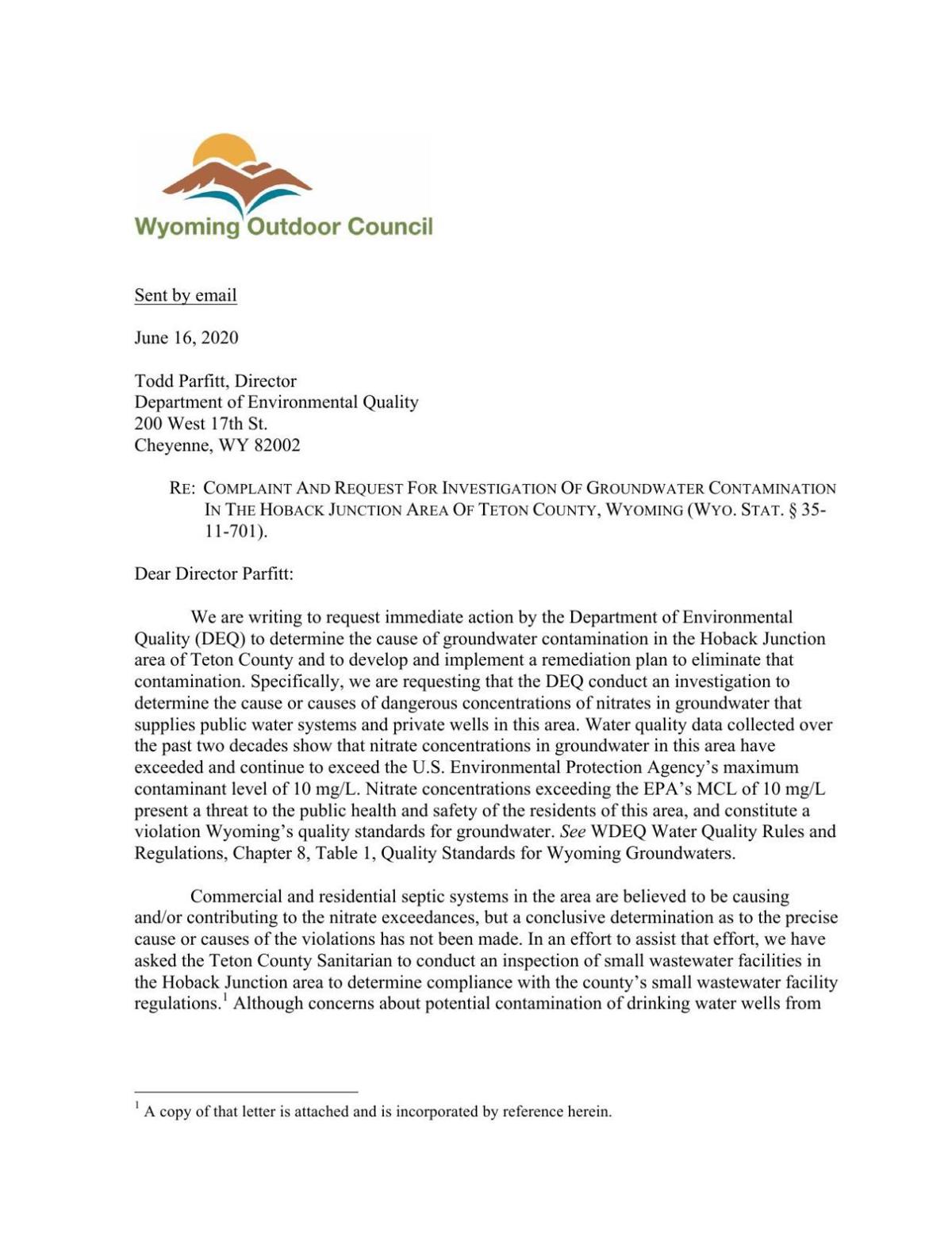 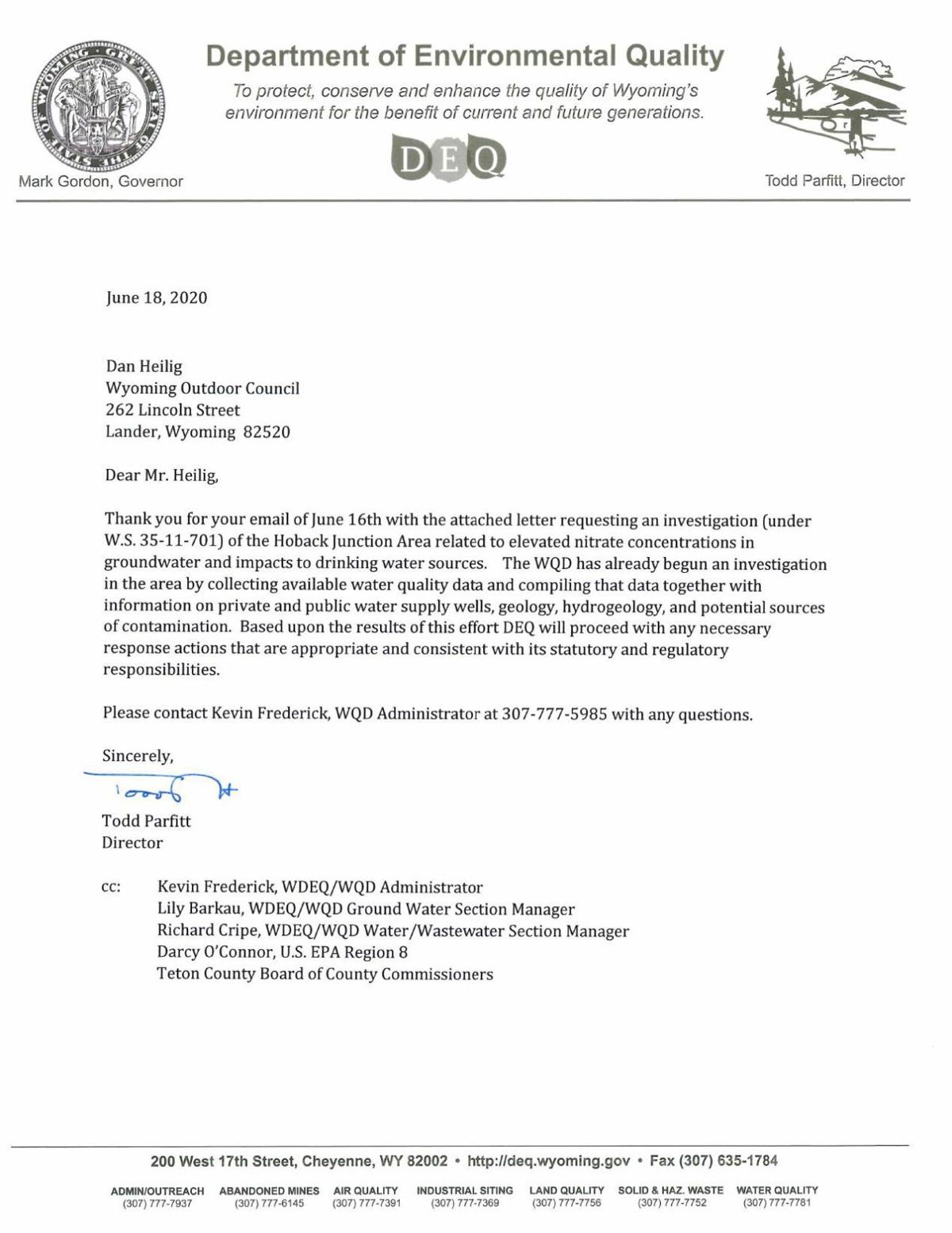 A stakeholder group convened by Teton County has supported coming up with a regional solution to the drinking water woes and potential pollution issues that have plagued the Hoback community. The group, which included residents, business owners and engineers, met last year and into the spring, and jointly recommended forming some type of district so that they would be eligible for Wyoming Water Development Commission funds. Forming a district would also allow the region’s residents to tax themselves to support locating and piping in a long-term source of safe drinking water.

Another Hoback water stakeholder group recommendation was in step with Heilig’s request to the DEQ.

“They also put forward a recommendation that the Conservation District, county or other entity work on an investigation to understand the cause of this contamination,” Girard said.

Whether the state’s investigation aids the effort to form a district and solve southern Teton County’s drinking water issues in the long term remains to be seen. It’s a complex issue with serious challenges, Girard said, owing to the many regulatory jurisdictions involved, broad geographic area and established neighborhoods and HOAs, which have been handling the issue piecemeal.

“Then you add on ongoing investigation,” Girard said. “It adds to the complexity. It’s a real challenge.”

Heilig, for his part, hopes the state’s investigation will help move the needle by ending the ongoing debate about what’s to blame for Hoback’s groundwater contamination.

“All the evidence that’s been assembled points directly to septic systems,” Heilig said. “This study should resolve that question once and for all, and then we can get focused on finding solutions.”

“The No. 1 priority, of course, is to ensure that the residents of Hoback have a clean, safe, reliable source of drinking water,” he said. “But No. 2 is to clean up the existing groundwater contamination — and help be sure that this doesn’t happen again, not only in Hoback but in other areas in Teton County experiencing these so-called nitrate hot spots.”