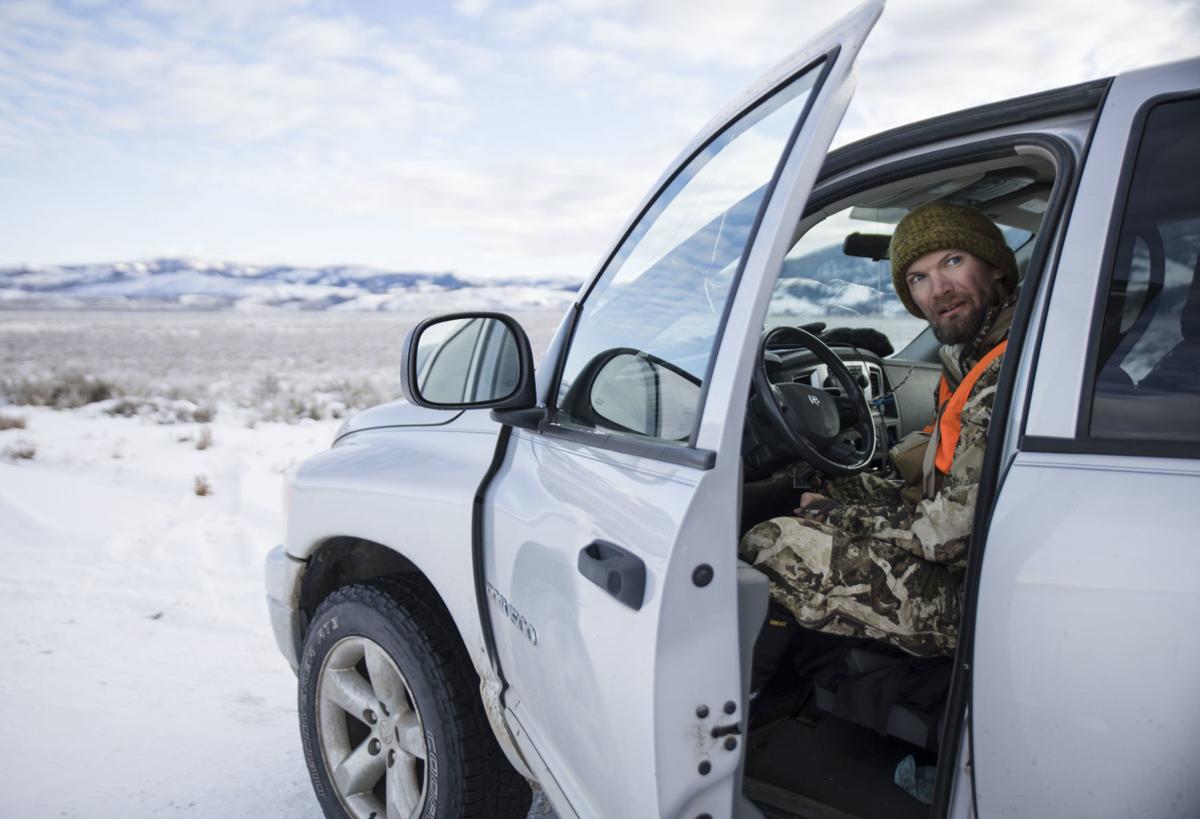 Rylan Lynam, from Moose, waits in his truck on the morning of Dec. 5 in hopes of seeing an elk during the last week of the “Elk Reduction Program” in Grand Teton National Park. A recent study found that some grizzlies know when it’s hunting season and take advantage. 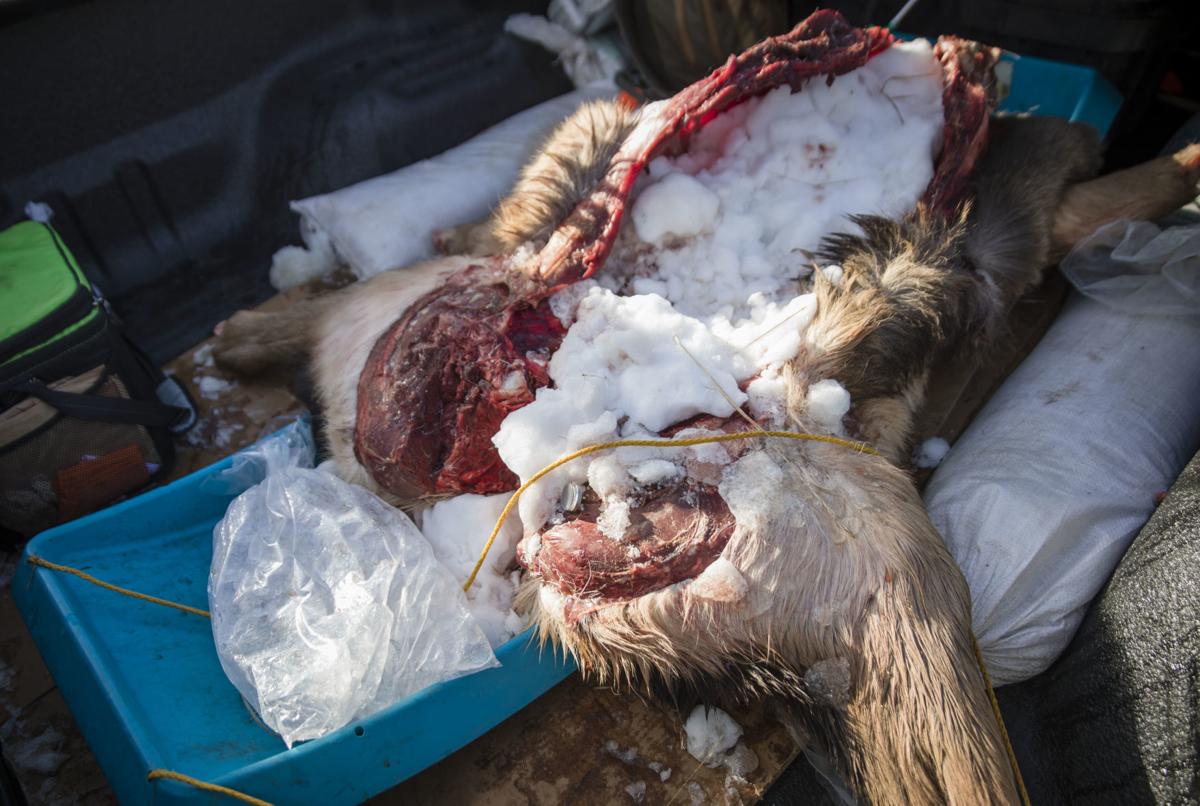 A calf elk sits in a hunter’s truck in early December. Only the best eating parts go home with hunters, and much of what is unwanted is left on the ground at the kill site or in camp. That’s food for some bears. 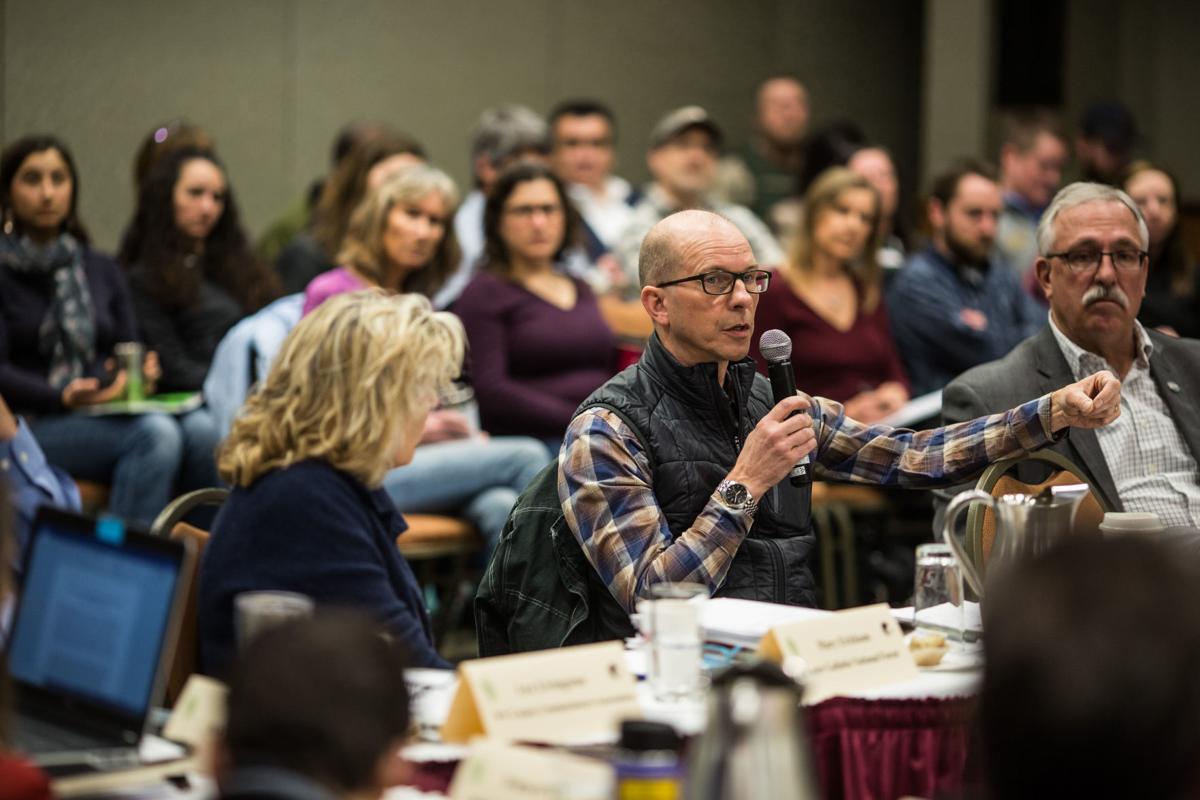 Rylan Lynam, from Moose, waits in his truck on the morning of Dec. 5 in hopes of seeing an elk during the last week of the “Elk Reduction Program” in Grand Teton National Park. A recent study found that some grizzlies know when it’s hunting season and take advantage.

A calf elk sits in a hunter’s truck in early December. Only the best eating parts go home with hunters, and much of what is unwanted is left on the ground at the kill site or in camp. That’s food for some bears.

Federal wildlife scientists have put to rest the idea that the late-season elk hunt in Grand Teton National Park draws in and concentrates large numbers of grizzly bears.

Bears, especially residents, do learn to key in on the prehibernation food source of gut piles and gunshot-and-lost elk, and they can amass in numbers in the open hunt area. But the largest influx of grizzlies to the east side of the Tetons actually comes weeks earlier in the fall, when itinerant grizzlies are passing through. Few bears, relatively, remain out of their dens by the time hunters typically are actively killing elk within the park in mid-November, Interagency Grizzly Bear Study Team researchers recently concluded.

“By the time elk carcasses have accumulated in significant numbers, only a small number of bears may remain active in the areas open to hunting,” Study Team Leader Frank van Manen wrote in a recent edition of the academic journal Ursus. “Given the lack of other food resources, these remaining bears specialize on elk carcasses, a notion that is supported by telemetry data and observations.”

The rest of the Ursus arctos horribilis clans are likely already hibernating. Past research has found that 90% of female bears typically have entered their dens by the end of November, and that hibernating males hit the 90% threshold by the second week of December. (On the flip side, 88% of the bears marked in the study were still out of their dens on Nov. 1.) In recent years Grand Teton’s elk hunt, dubbed a “reduction program,” has wrapped up about a week into December.

The biologists, who are also researching other aspects of hunter-grizzly interaction, initially had a hunch that the late-season cow and calf elk hunt would have a magnet effect for Jackson Hole grizzlies.

The magnet effect of a hunting season has been documented by past research focused on the southern boundary of Yellowstone National Park, where grizzlies are drawn out of the park into the adjacent Bridger-Teton National Forest’s Teton Wilderness, where elk and deer hunting occurs earlier in the year.

To make their determinations, U.S. Geological Survey and National Park Service researchers strategically deployed barb-wired hair snares and culvert-style traps to collect genetic information and estimate numbers of grizzlies in 2014 and 2015. Sample sites were concentrated in a 190-square-mile area in and around the east side of Grand Teton, and specifically near the convergence of known elk migration paths headed toward the National Elk Refuge.

Overall, 31 unique grizzlies were identified: six females and 25 males. Eight of the bears were classified as “residents,” and “almost all” of these animals were documented keying in on elk carcasses within the park hunt zone before tucking in for the season. Well-recognized bears such as the grizzly sow known as 399 have been among the animals that have taken advantage of gut piles and carcasses along the southern reaches of her range.

But the majority of the grizzlies marked — and 11 had never been identified — were classified as “transients.” Those animals were the primary factor in the overall abundance of bears and were much less likely to stick around late into the year.

“Our findings suggest that temporary movement into the study area did occur,” van Manen’s study says, “but primarily in the time period prior to the elk hunting season, rather than during the elk reduction program.”

Wildlife managers and biologists seek to learn more about the relation of elk and deer hunters and grizzly bears because the clash of the two is often deadly. Preceding the study there were two high-profile incidents: a hunter who was mauled but survived in 2011, and a charging grizzly that was shot and killed in the Snake River bottoms in 2012. Across the Greater Yellowstone Ecosystem, 28% of all grizzlies killed by humans over a recent 15-year period were casualties of run-ins with hunters acting in self defense, according to the study.

The researchers did not make any specific recommendations about the park hunt, though they did end by saying that the late timing of the hunt probably reduces conflict. Moreover, the habituated nature of the resident bears “may increase their tolerance” to hunters, they wrote.

“Although continuation of the elk reduction program with the current timing likely represents a scenario with a low relative risk, elk hunters should be aware that encounter risks remain real, as they are anywhere within occupied grizzly bear range,” the study says.

“Thus, maintaining the status quo regarding the timing of the elk hunt would not diminish the importance of current strategies that are in place to reduce the risk of hunter-bear encounters, such as the requirement to carry bear spray and closure of areas near the Snake River bottoms,” the study continues. “The timing and location of the elk reduction program are unique, so we caution that our study findings may not apply elsewhere in the ecosystem.”

Van Manen was not immediately available for an interview over the holidays. The Ursus study is attached to this story.

Editor's note: This story has been updated to correct the name of the journal the study was published in. The journal's name is Ursus, but the study was  distributed by a web-based aggregator of scientific research called BioOne Complete.