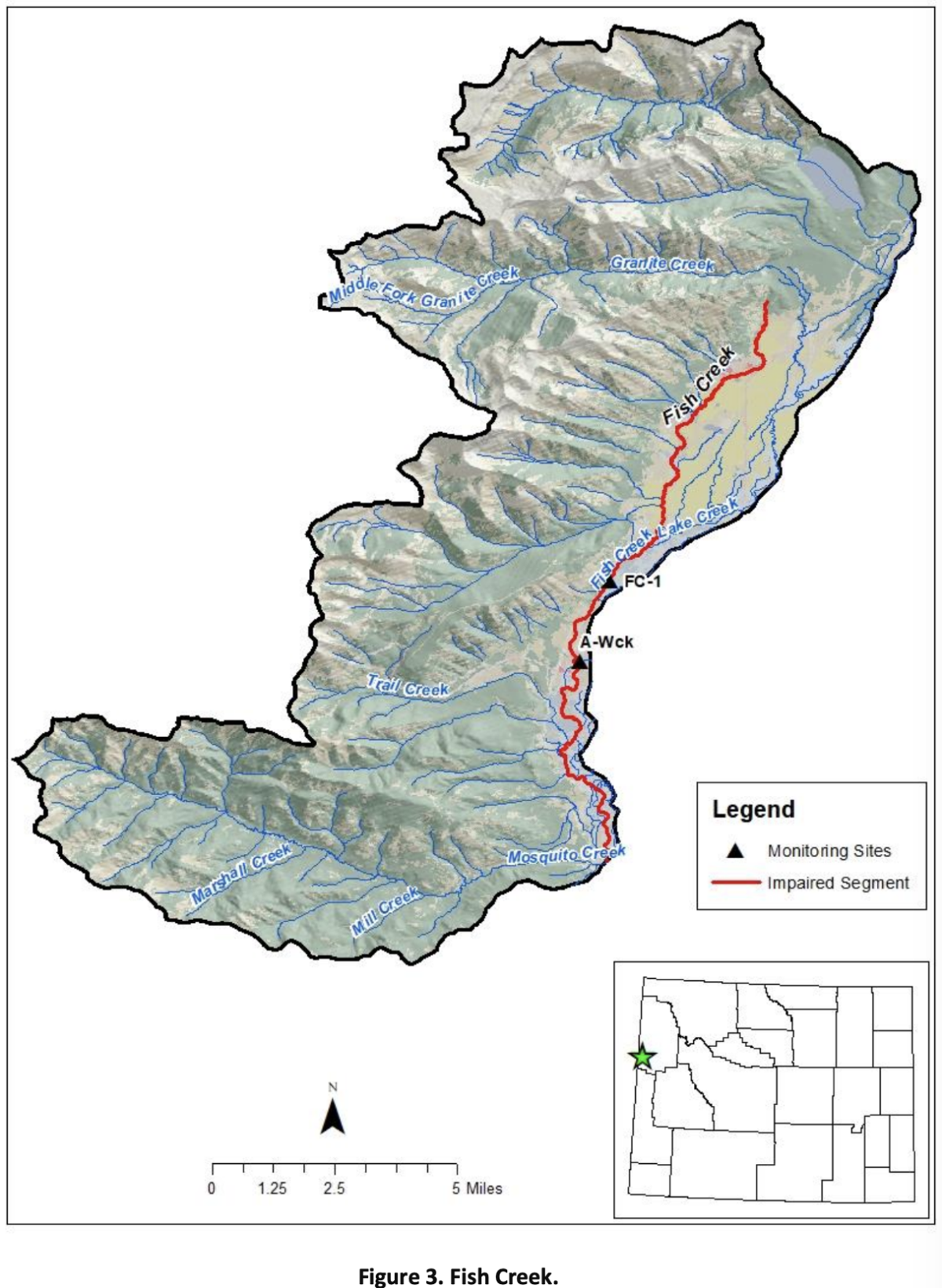 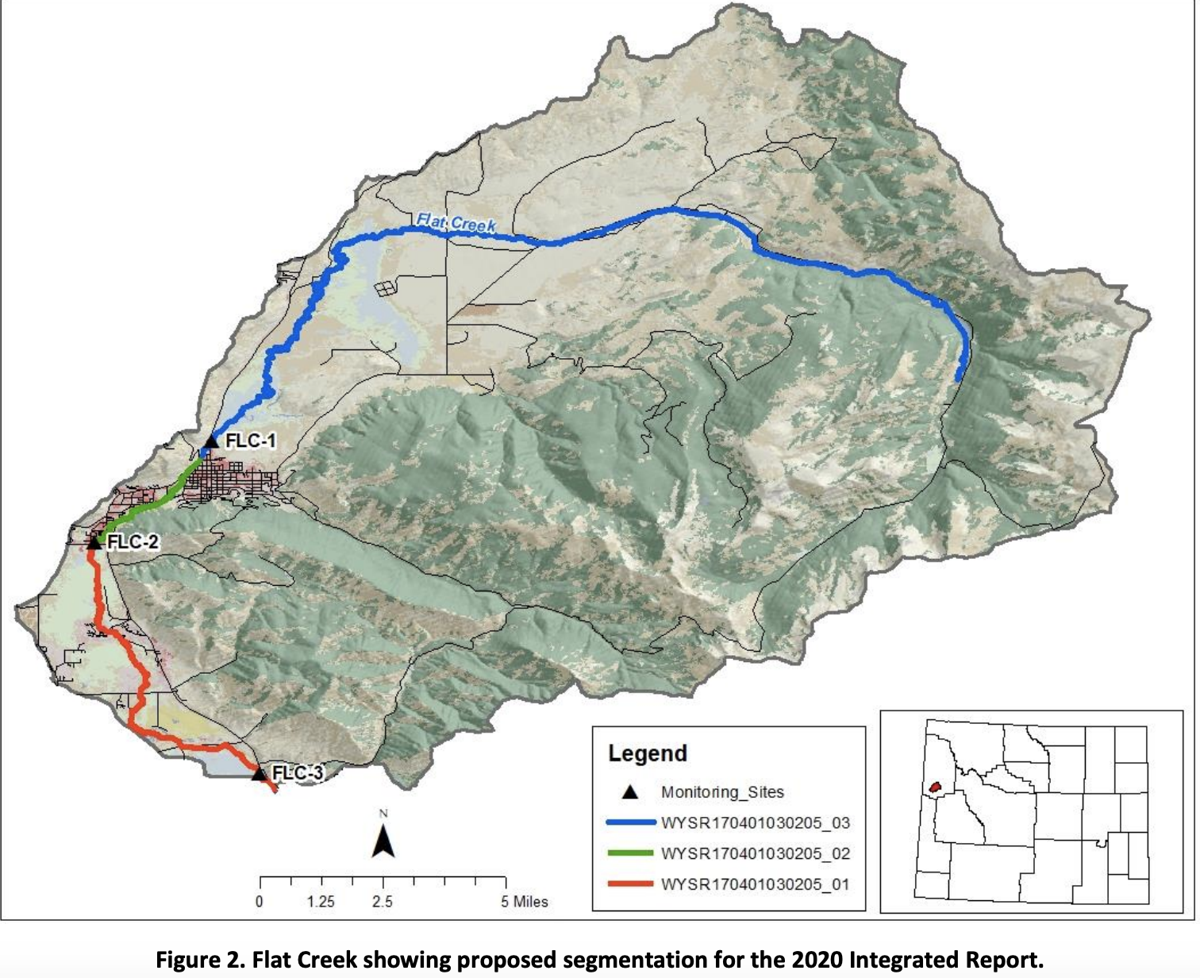 Two cherished streams draining the most central, developed parts of Jackson Hole are now listed as “impaired” by environmental regulators due to fecal bacteria pollution.

All of Fish Creek and portions of Flat Creek officially have an E. coli problem, according to the Wyoming Department of Environmental Quality. The state agency made that determination, which was expected, in the draft version of its 2020 report, which rounds up water quality conditions across the Equality State. Teton County’s two prized streams actually constitute two-thirds of all the new “impaired” listings documented since the last DEQ report was completed two years ago.

Flat Creek’s listing, which covers only the lowest portions nearest its confluence with the Snake River, traces to 2017 monitoring that found its water contained a mean of 145 bacterial organisms per 100 milligrams — in excess of the DEQ’s limit of 126 organisms, intended to protect human health in streams used for full-immersion recreation, aka swimming. Upstream portions of Flat Creek in the town of Jackson, sampled during a May to July high-water testing period, easily fell safely within the state parameters, while the stream segment flowing through Wyoming’s South Park Wildlife Habitat Management Area tested as unfit for recreation. The proposed impaired stretch runs upstream from there through South Park.

Separately, Flat Creek has had an 8-mile impairment within and around the town of Jackson since 2002 that’s related to siltation and stormwater runoff. Regulators at the time found Flat Creek was in poor biological shape and not suited for its native coldwater fish species and other aquatic organisms. Nearly two decades later the problem is still not rectified — though a fixer-up plan is on the agenda.

Fish Creek’s problems are much more widespread, covering all 19 miles of its length, according to DEQ’s draft report. A 2017 test site near Wilson and another farther upstream nearer Teton Village both registered exceedances of the state standard by a wide margin, and during more months of the year. Non-compliant bacterial counts ranged from 135 to 341 organisms — the latter count being nearly three times the state standard for “primary” recreation streams.

Monitoring conducted during the same period in the Snake River picked up no noncompliant readings.

Required by the U.S. Environmental Protection Agency every two years, the title of the DEQ’s report is a bureaucratic mouthful: “Wyoming’s 2020 Integrated 305(b) and 303(d) Report.” The document was released in late December as a draft and is open to public comment through Feb. 20. Comments can be submitted at WQ.WyomingDEQ.CommentInput.com.

The purpose of the 176-page document is partially to identify polluted waters, and ultimately to move toward cleaning up the problem.

Flat Creek is among those in line for a plan that would remedy its habitat impairment dating back to 2002. That plan, which establishes a “total maximum daily load” for contributing pollutants, is being prioritized for 2022, according to the DEQ report. However, a plan to fix the E. coli issues in Fish and Flat creeks is not yet on the near-term agenda.

The condition of Fish Creek has been scrutinized for years and researched by federal scientists with the U.S. Geological Survey. In 2013 a USGS report found that Fish Creek contains “13 to 180 times” more algae than other regional rivers and creeks. Nutrient pollution was considered the culprit, and several years later the USGS issued another report looking at the major contributors of nitrogen and phosphorus to the watershed. Those contributors, listed in order of magnitude, are atmospheric deposition, livestock, fertilizers, septic systems and wastewater plants.

Wyoming DEQ doesn’t have regulations governing nutrients, though a process is underway to establish limits that would work to prevent nutrient-fed phenomenon like harmful blue-green algae.

Protect Our Waters Jackson Hole founder Leemon is well acquainted with the West Bank water issues: The forebear to his current organization was called Friends of Fish Creek. He argued that past research looking into what’s fouling Fish Creek may have missed the mark by ranking septic systems low on the list of contributors.

“There’s a connection between septic systems and E. coli that gets downplayed a lot,” Leemon said. “Septic was not as significant as some of the other [nutrient inputs], but the problem with that is that they were estimated as correctly operating septic systems, and we know that that’s not the case.”

The only other newly impaired stretch of Wyoming water that DEQ’s draft report identified was Lander Creek, which flows off the Wind River Range and also is being listed due to dangerous levels of E. coli bacteria. Lander Creek has a controversial history of impairment.

It was one of three streams — along with the Hoback Basin’s Clarks Draw and Pacific Creek in the Winds — that was previously listed as impaired for E. coli but was removed from the DEQ’s report after agricultural groups and the Wyoming Association of Conservation Districts pressured the state to throw out E. coli data. Their reason was that the water quality data came from the Western Watersheds Project, an ardent opponent of public lands grazing. DEQ obliged, scrapping the data and impaired listings, contending that there were quality control issues with how the water samples were processed.

In 2016 and 2017 DEQ took its own stab at assessing the previously impaired streams. Clarks Draw registered averages of 250 and 174 bacterial organisms per 100 milligram — above the old limit — but it escaped an impaired listing because it was among the nearly 83,000 miles of creeks and washes in Wyoming that were categorically downgraded to a five-times lower E. coli standard in streams less likely to be be used for “primary contact” recreation, like swimming.

It was the same story for the Wind River Range’s diminutive Pacific Creek: Test results came in at an average of 204 organisms — above the previous safe E. coli threshold — but well below the new low-flow stream limit of 630 organisms per 100 milligrams.

Wyoming DEQ specialists who worked on the water quality condition assessment were not available for an interview Monday or Tuesday.

Statewide, Wyoming’s waterways and lakes are in pretty good shape, especially relative to more developed and peopled parts of the country. Approximately 7% of 267,294 stream miles and 4% of 487,948 lake acres have been assessed. Only 6% of assessed stream miles and 2% of the assessed lake acres are currently listed as impaired. To date, Wyoming DEQ has completed “total maximum daily load” plans for 66 streams, lakes and rivers that were once listed as impaired.

Copies of DEQ’s draft report and of sub-reports on Fish and Flat creeks and Clarks Draw, Lander Creek and Pacific Creek are attached to the online version of this story at JHNewsAndGuide.com.

Well, we cant blame Flat Creek problems on cattle grazing now can we? I heard no mention of the homeless camps in Karns Meadows during the summer. Test the water now and lets see the results. After all. I don't think those are Babe Ruth candy bars floating downstream in the summertime.

I don't recall anyone blaming E-coli entirely on cattle grazing. However, considering the lower stretches of Flat Creek are the only stretches listed as impaired, it's fair to assume that cattle grazing and elk feedgrounds likely play a role. And yes, these "baby ruth" like objects floating down the stream (that you have probably made up) would also play a role. Point being, there are plenty of sources of E-coli and you should commend DEQ and the County for taking action, rather than using your standard strategy of trolling which contributes absolutely nothing towards fixing the problem.