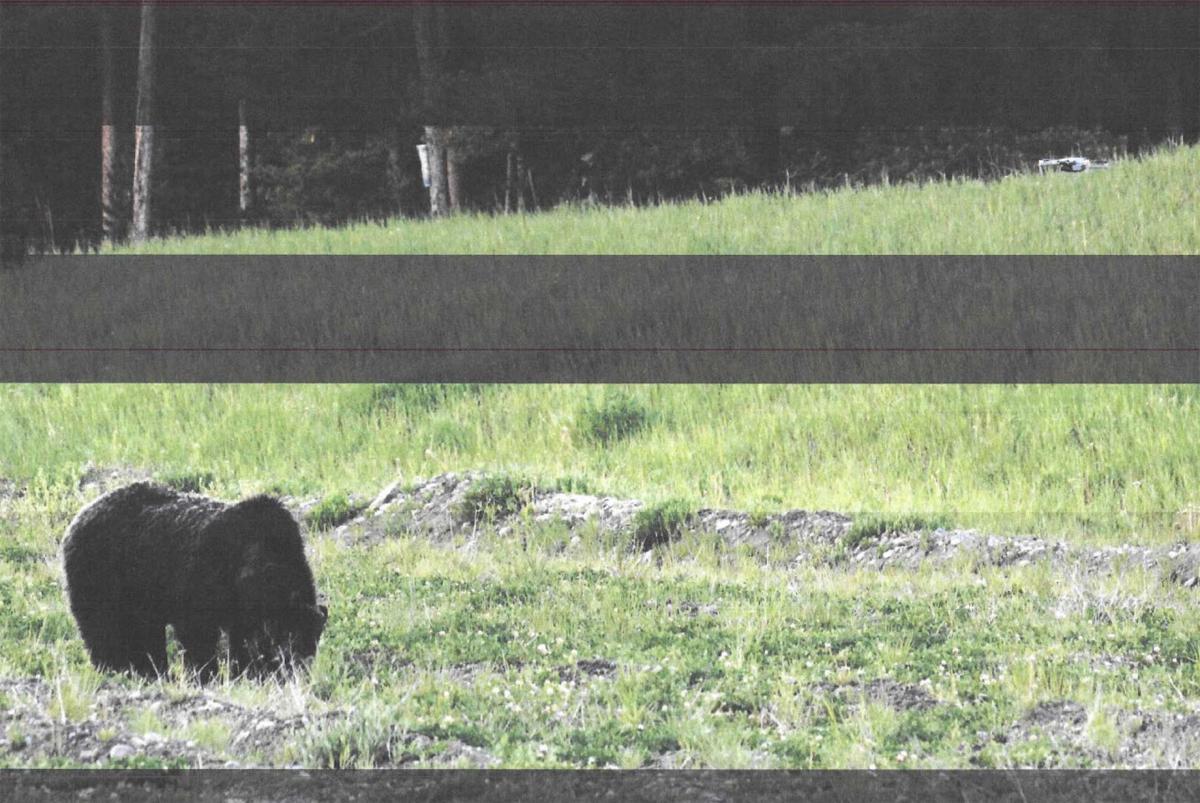 A drone can be seen near the top right corner of this photo from a U.S. Fish and Wildlife Service investigation report. The drone hovered near a grizzly bear off the Togwotee Pass highway in July 2020. 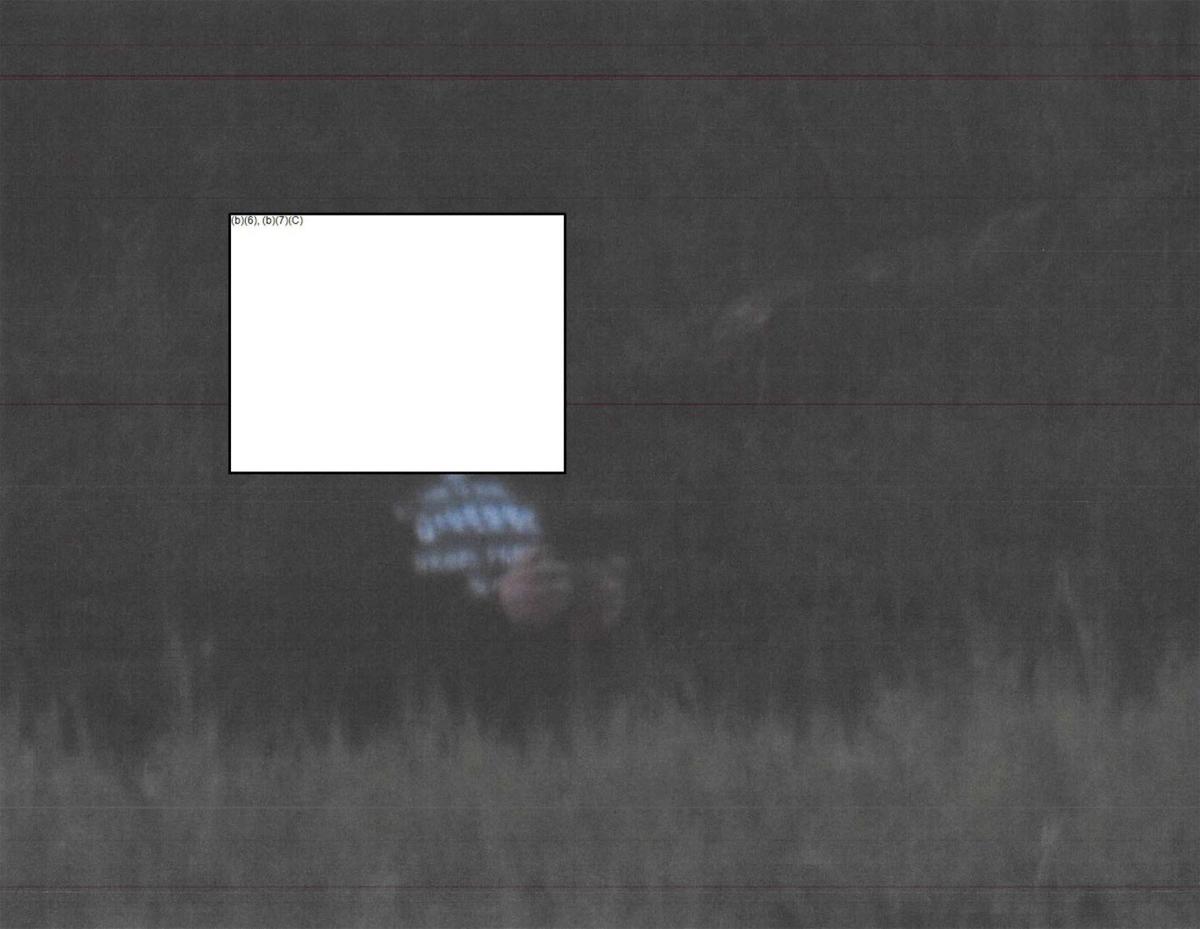 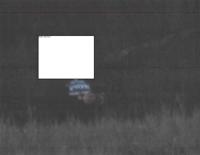 This redacted photo of a man piloting a drone near Grizzly 863 on the Togwotee Pass highway was included in a U.S. Fish and Wildlife Service investigative report.

Policing places where wildlife and humans overlap has always been a challenge, and documents show drones adding to the increasingly tense situation on Togwotee Pass. Now law enforcement is cracking down on crowds.

A federal wildlife officer reviewed video evidence last year that showed Michigan vanlifers using a drone to chase a collared grizzly through a Togwotee Pass meadow. As the bruin fled the pint-sized unmanned aircraft in July 2020, the animal was described as “looking back over its shoulder at the drone” that was in pursuit. The description of that scene comes from law enforcement documents that the News&Guide acquired through a Freedom of Information Act request. The Michiganders posted video of the fleeing grizzly on Instagram before an online haranguing persuaded them to take the footage down.

About two weeks earlier in 2020, again on Togwotee Pass, a commercial trucker with plates registered to an Illinois business launched his drone and flew it to “within a few feet” of well-known Grizzly 863, also known as Felicia. Vacationers from Indiana tried to intervene, but their admonishment didn’t go over well.

“When they confronted the trucker and told him that using his drone to harass the grizzly bear was illegal because the grizzly bear is an endangered species, the trucker became defensive and walked towards [them] and asked, ‘You got a problem?’” according to a U.S. Fish and Wildlife Service investigation report.

Feeling “threatened,” the Hoosiers retreated, but not before taking photos and reporting the incident to Teton County Sheriff’s Office deputies.

The trucker denied flying the drone anywhere near the foraging roadside grizzly, but photographic evidence presented to federal wildlife officials shows otherwise. A drone is pictured hovering immediately adjacent to the ursine as it ate, roughly 10 feet off the ground.

Unlike the collared bear that fled, Grizzly 863 did not appear perturbed by the remote-controlled aircraft. According to the report, she kept eating as the drone buzzed nearby.

U.S. Fish and Wildlife Service special agent Steve Stoinski, who’s since retired, launched an investigation into both complaints, suspecting violations of two federal laws. His enforcement effort sought to prove flying drones at grizzlies qualified as a potentially illegal “take” under the Endangered Species Act. The flights were also an alleged infringement of the Airborne Hunting Act, which explicitly penalizes using “an aircraft to harass any bird, fish, or other animal.”

Neither drone encounter triggered legal action. By December of last year the cases were recommended for closure due to “other investigative priorities.” Stoinski consulted with the Assistant U.S. Attorneys Office for Wyoming and learned that there was no legal precedent for a drone flight violating the Endangered Species Act. The cases were not accepted by the U.S. Attorneys Office for Wyoming, so prosecutions weren’t pursued in either case.

“There are times with 100, 150 cars, people approaching within 10 or 15 yards, and people getting into fistfights.” —Jack Bayles, wildlife tour guide

That is the same outcome of another Stoinski-headed grizzly bear-related investigation that unfolded in Teton County last year. In that instance a resident of the Solitude Subdivision who puts out grain for moose and mule deer was documented feeding at least eight grizzly bears over the preceding year — including world-famous Grizzly 399, her four current cubs and cubs from past litters. Because moose feeding is legal under Wyoming law — although Teton County has a local regulation prohibiting it — the federal agency dropped the case and no charges were filed.

Flying drones near grizzlies is just one wrinkle in what’s proved a difficult and often contentious bear-watching scene gaining popularity on Togwotee Pass.

Down the highway in Grand Teton National Park, flying a drone for any purpose has been illegal since the National Park Service adopted an agency-wide policy in 2014. The prohibition certainly hasn’t halted all illegal flights: The remnants of a Dutch tourist’s drone are presently stewing in the bottom of Yellowstone’s famous Grand Prismatic Spring. But drone flights are legal on the neighboring Bridger-Teton and Shoshone national forests.

Same goes for wildlife viewing distance limits. In the national park people can be cited for treading within 100 yards of a bear. On the national forests, no such thresholds have been established.

National forest staff’s ability to deal with crowd control is more limited, too. Unlike the park’s “wildlife brigade” — dozens of volunteers led by paid staff — the Forest Service has a single volunteer spending most days on the side of the highway.

“It’s pretty hard to ‘manage’ that situation if 50 or 60 cars are there,” said Todd Stiles, the Bridger-Teton’s Blackrock District Ranger. “One or two people can’t really manage that, but simply having a presence, I would argue, does have a lot of value.”

When hundreds of vehicles and onlookers amass adjacent to the human-habituated Grizzly 863, the situation can turn fraught. This year the 8-year-old sow is toting two cubs of the year, a motherly status that historically has drawn her nearer to Highway 26 than when she’s solo. The cubs have also amplified already significant public interest in seeing the grizzly nicknamed Felicia by wildlife watchers.

“What started as just a handful of people occasionally watching a sow grizzly bear and her cubs has now turned into large crowds of people getting out of their illegally parked vehicles, creating a serious safety issue along this busy highway due to vehicles traveling at a high rate of speed as they pass by,” Wyoming Highway Patrol Lt. Matt Brackin said in an interagency news release that described a “consensus” among involved federal and state agencies that the situation atop Togwotee has become untenable.

In recent weeks state troopers have been making motorists leave the scene when the grizzlies are grazing alongside the highway shoulder. They’ve also staged flashing message signs that threaten to ticket vehicles parked outside of designated pull-outs between Togwotee Mountain Lodge and the top of the pass. Simultaneously, the Wyoming Game and Fish Department has hazed the habituated grizzly family by firing cracker shells once human crowds have dispersed.

The more forceful management and threats of ticketing, the agencies argued in a joint statement, are necessary to protect the safety of both humans and bears. Stiles agreed a change was needed.

“It has helped,” Stiles said. “But if someone is not there all the time, then there’s generally been people there. There have been days where she’s literally been 10 yards off the highway nursing her cubs. You can imagine the kind of attention that would attract. People want to see that.”

Some wildlife enthusiasts, however, see a downside to leaving the grizzly bears along the highway attended by legions of fans and photographers. When vehicles are clogging both shoulders and crowds are massed, traffic speeds on the federal highway slow to a relative crawl.

“But when the people aren’t up there, the semis are going by at 70 mph,” Jackson Hole wildlife photographer Sue Cedarholm said.

Since 2015 at least three grizzly bears have been struck and killed on the 38-mile stretch of highway from Moran Junction to the Continental Divide, where Togwotee Pass tops out.

“I don’t know what the answer is, but something has got to be done for the safety of the bears and people,” Cedarholm said. “The Forest Service is going to have to come up with some sort of wildlife management system similar to the wildlife brigade in the park.”

Cedarholm has mixed feelings about hazing the bears and how the agencies have handled the situation. Fellow photographers and passersby deserve much of the blame for exacerbating tensions on Togwotee, she said.

Photo tour guide Jack Bayles has a similar take. The current inaccessible state of affairs, he said, is an improvement from the mayhem that hung along the highway when Felicia watching was a free-for-all.

“We’d like to be able to spend more time with her, but we understand why they cannot allow that type of chaos on a U.S. highway,” Bayles told the News&Guide. “There are times with 100, 150 cars, people approaching [bears] within 10 or 15 yards, and people getting into fistfights. I don’t know what else you’re supposed to do besides, ‘Everybody out of the pool.’”