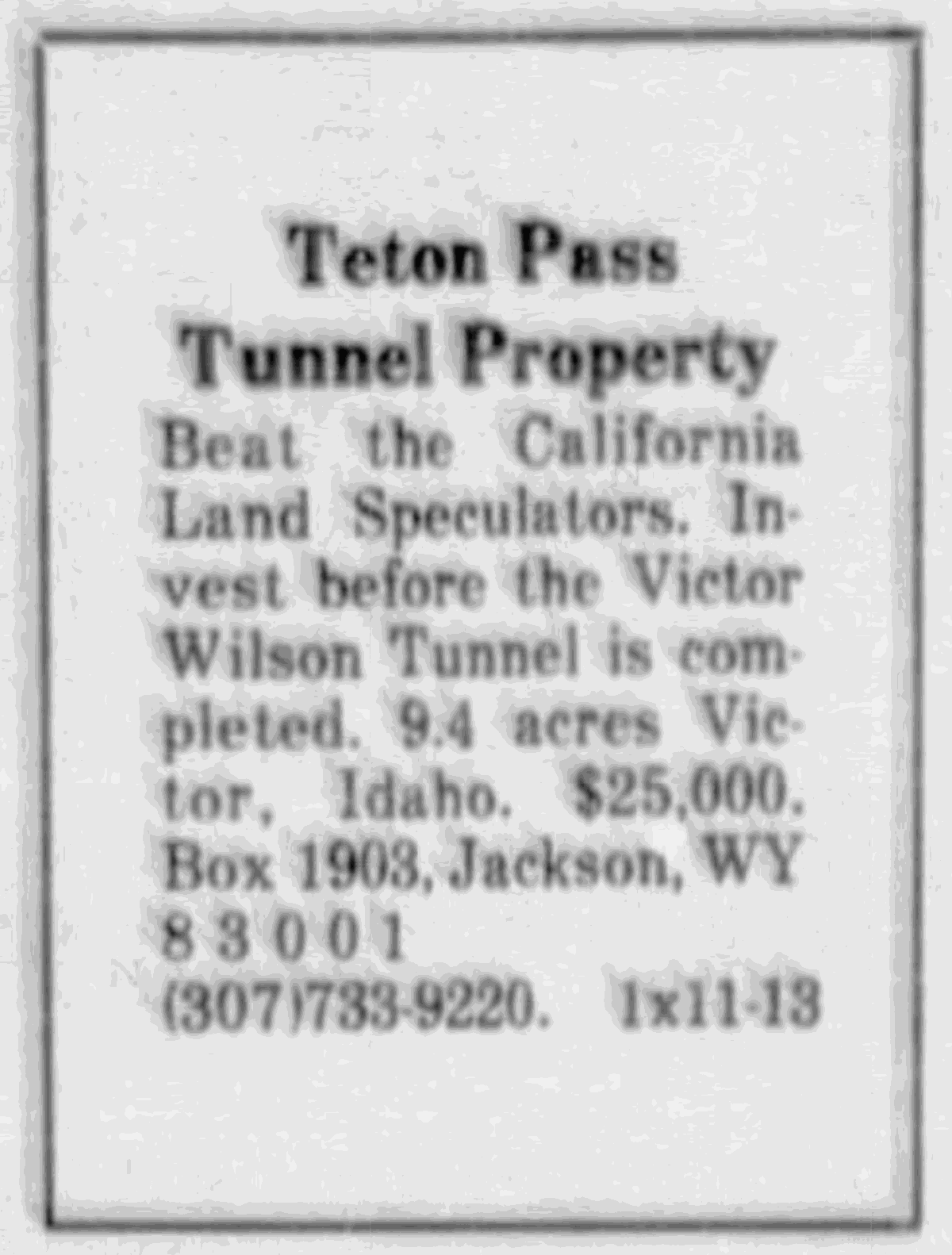 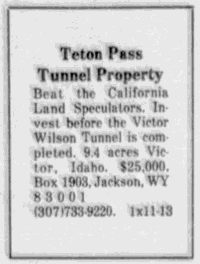 An advertisement in the Nov. 13, 1985 Jackson Hole News encourages potential land buyers to invest in Teton Valley property before a tunnel is built on Teton Pass. 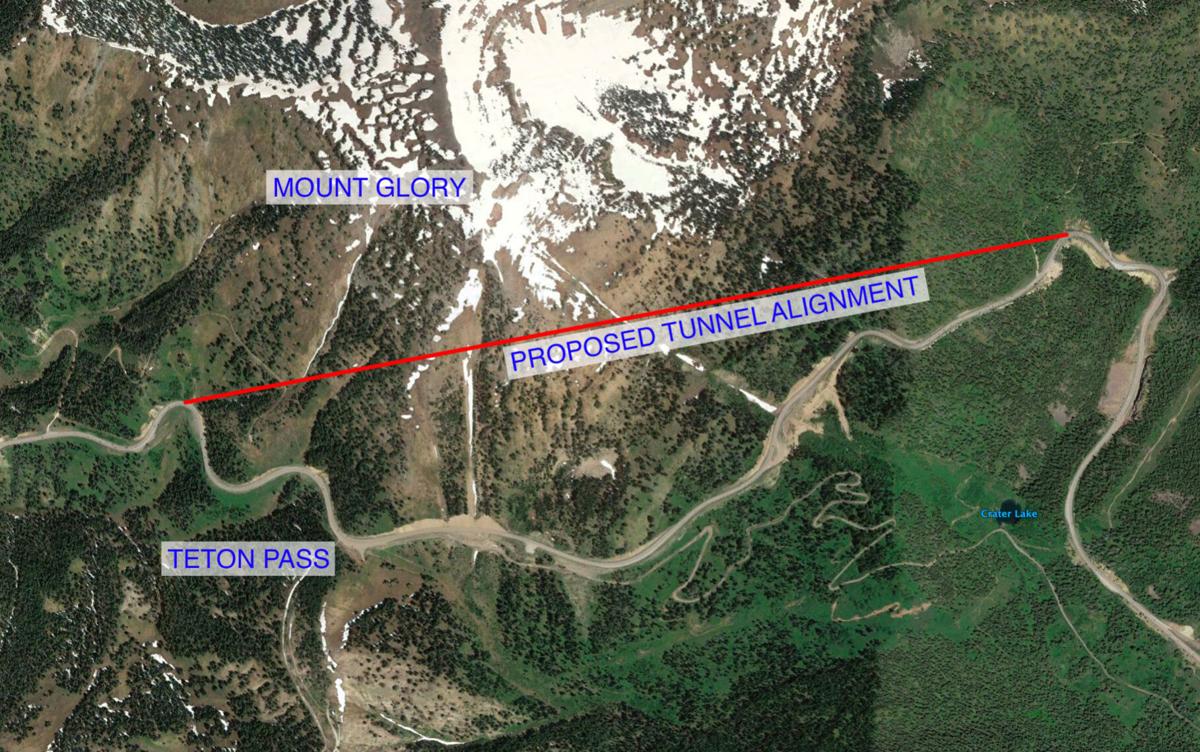 A proposed tunnel on Teton Pass from a 2013 feasibility study would bore under Mt. Glory for about 1.4 miles from just below Phillips Bench to the area known as “Second Turn” just west of the pass summit. The study indicated the rock was, “extremely ... durable … However, the fault that created the Tetons is still active, and poses seismic concerns.”

Although there are several slide paths on Teton Pass that push snow onto Highway 22, the two most active — and problematic — are Mt. Glory’s Twin Slides, seen here as the prominent double path on the mountain’s south face, and Glory Bowl, just over the ridge on the right side of this image.

For decades, a tunnel through Teton Pass has been a curiosity for Teton County residents, a pie-in-the-sky aspirational fix to the avalanche problems on Highway 22.

Eager citizens have penned letters to the editor to the News&Guide and its predecessors in support; a few political hopefuls have included it in their platforms, hoping to prove their commitment to audacious community solutions.

That advocacy has been to no avail.

But depending how fortune’s wheel spins, the Teton Pass tunnel could one day be a reality. The subterranean highway is again on officials’ minds, as the Wyoming Department of Transportation has included it in a wishlist of projects to be sent to the Biden administration as part of the American Jobs Plan, the infrastructure bill Congress is considering.

“The guidance from Washington has been, ‘Send us something big,’ ” WYDOT Director Luke Reiner said. “This is still working through the process, but we listed some big projects.”

A tunnel through the southern end of the Tetons qualifies as big, but it’s not the only moonshot on the list, which is still subject to change, Reiner said. Alterations to Interstate 80, Wyoming’s main thoroughfare, are also being eyed.

One major freeway project would retool the interchange between Interstates 25 and 80 in Cheyenne, Reiner said, where crashes are common due to tight corners. Another would expand Highway 30 near Elk Mountain to four lanes, offering redundancy for commercial trucking when I-80 closes due to inclement weather and crashes.

The Teton Pass project is not the only tunnel WYDOT is eyeing.

Existing tunnels near Green River and through the Wind River Canyon south of Thermopolis are either old or outdated, so WYDOT hopes to take the opportunity for federal money to shore them up.

The American Jobs Plan, should it pass, has roughly $600 billion for what is considered traditional infrastructure, along with money for things like modernizing homes, rebuilding the electrical grid and improving clean drinking water infrastructure.

Senate Republicans have countered the Biden administration’s plan with a roughly $600 billion version that would focus solely on “traditional infrastructure.” Democrats have considered passing their plan through a process called budget reconciliation, which requires only a simple majority, so the final scope of any deal is up in the air.

Putting a tunnel through Teton Pass has been a source of community activism since at least the 1980s, when real estate sellers used the potential for a Teton Pass tunnel to hawk their Victor, Idaho, acreage in the Jackson Hole News. Starting as far back as 1988, Alta resident Chuck Irwin sent the local papers letters on a somewhat regular interval, extolling the benefits of cutting through the United States’ youngest mountain range.

“Aside from the obvious safety implications, the tunnel would lower the transportation cost of everything brought into Jackson,” he wrote in a 2012 edition of the Jackson Hole Guide, the same one in which Ken Thomasma called a tunnel “long overdue.”

At least two county commission candidates have even staked part of their political claims on the notion: Republican Denis Lyman in 1990 and independent Marc Elkins in 2000 specifically declared they were pro-tunnel. Voters were not swayed, as neither garnered enough support to sit on the Teton County Board of County Commissioners.

WYDOT has in the past considered the tunnel, but it has yet to bite. In 1990, it explored the feasibility, but concluded that the $65 million to $70 million price tag ($134 million to $145 million today) was too high, given its inability to keep “present systems up to standard,” then-Director Don Diller said during a meeting in Jackson that year.

A 2013 feasibility study WYDOT conducted had essentially the same finding, that a tunnel could be done but that the agency’s budget precluded it from taking on such a large project. That document places the most logical route from near Phillips Canyon to the bottom of the “Second Turn” ski route on the west side of the pass.

The alignment would create a roughly 1.4-mile tunnel, which would keep costs lower than other potential alignments, including one that starts at Crater Lake off Old Pass Road. Based on tunnel-building costs at the time, WYDOT’s “conservative” estimate was that it would cost $260 million, again far more than the agency would be capable of spending.

In the 2013 feasibility study, the agency mentions that the Tetons, being a geologically young range, have relatively solid rock, but the presence of faults could be cause for concern. Reiner, the current director, said the agency hasn’t done engineering studies and would only move forward with them should the tunnel become more of a reality.

Experts in tunnel building say such a feat would be feasible, if cost were not a concern.

“It’s certainly a doable engineering project,” said Bob Smith, a longtime University of Utah geology professor. “I encouraged them to consider the project several years ago and gave them my ideas on both the consideration of a tunnel for auto traffic and for foot traffic.”

Smith is a distinguished professor in the university’s department of geology and geophysics, and he spends his sabbaticals teaching in Switzerland, where he has helped with several tunnel projects. Given that his experience includes constructing tunnels of at least 10 to 12 miles in Europe, he’s confident the Teton Pass tunnel, at a fraction of the distance, could be done.

The geologist raised some of the same questions the 2013 WYDOT document does regarding faults and other geological considerations. Though Smith has authored several papers on faults in the region and a book on Teton area geology, he said without further study he couldn’t definitively say whether the rock through Teton Pass would be fit for the tunnel.

At WYDOT, Director Reiner stressed that the tunnel, as of now, is simply “an item on a list,” a moonshot because the Biden administration asked for moonshots. As of Tuesday, the list was not finalized, but it featured several projects of interest to western Wyoming.

Expanding and modernizing Highway 22 from Wilson to Jackson is included, work that is already in the planning stages but could receive a shot in the arm from federal funding.

“Highway 22 is one of the roads on our radar as needing work,” Reiner said.

Another major project that would affect the region is a network of electric vehicle charging stations. Transportation officials hope to install them across western and central Wyoming along roads that lead from Interstate 80 to Yellowstone and Grand Teton national parks.

As the auto industry evolves and more consumers buy electric cars, Wyoming officials want to ensure tourists feel confident they can drive those vehicles anywhere in the state.

“We see it essential to facilitate the movement of electric vehicles to support our tourism industry,” Reiner said.

Despite the fact that electric vehicles and Highway 22 capacity might be the more practical projects, some Teton County residents will surely be interested in the idea of traveling through the bowels of Mount Glory.

“I think at least the community should have a strong conversation about this,” said attorney Steve Duerr, who has advocated for the tunnel in the past.

Duerr was disappointed that when Teton County created its transportation plan in 2000, it omitted the tunnel. Now, he’s at least happy to know it’s on the mind of government officials, even if it is a moonshot.