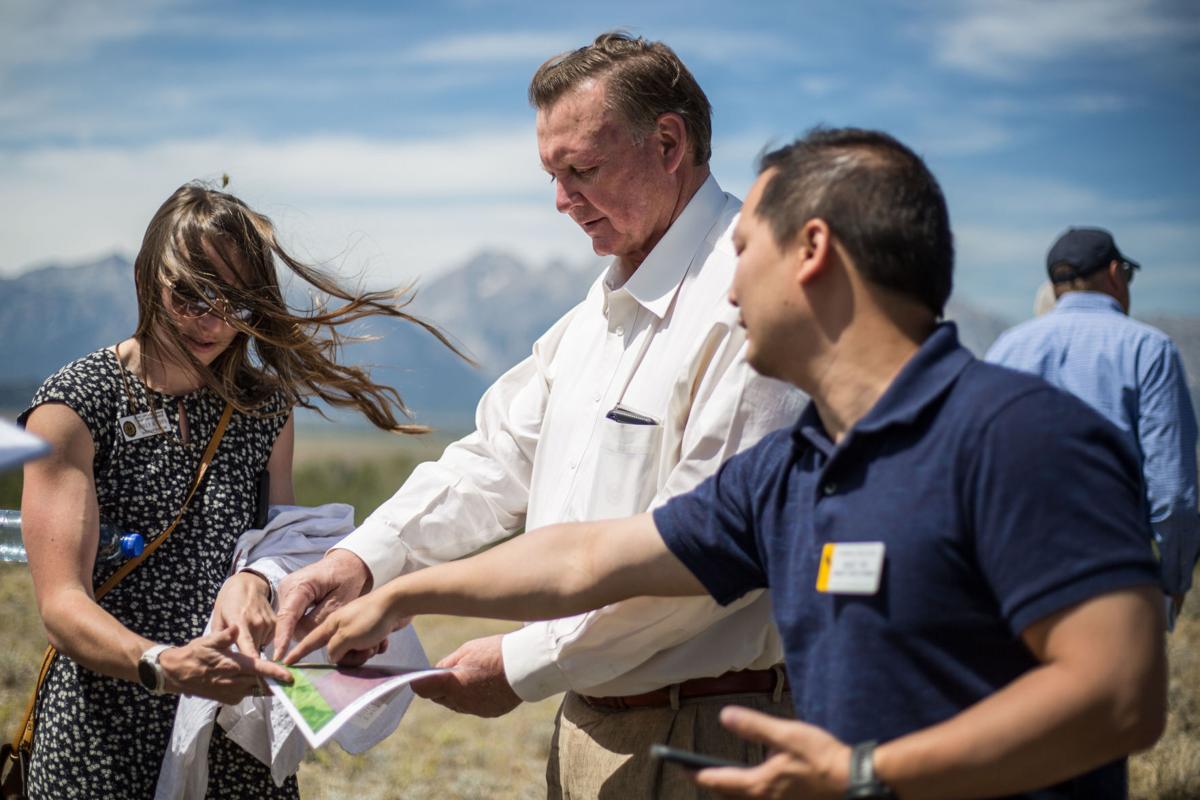 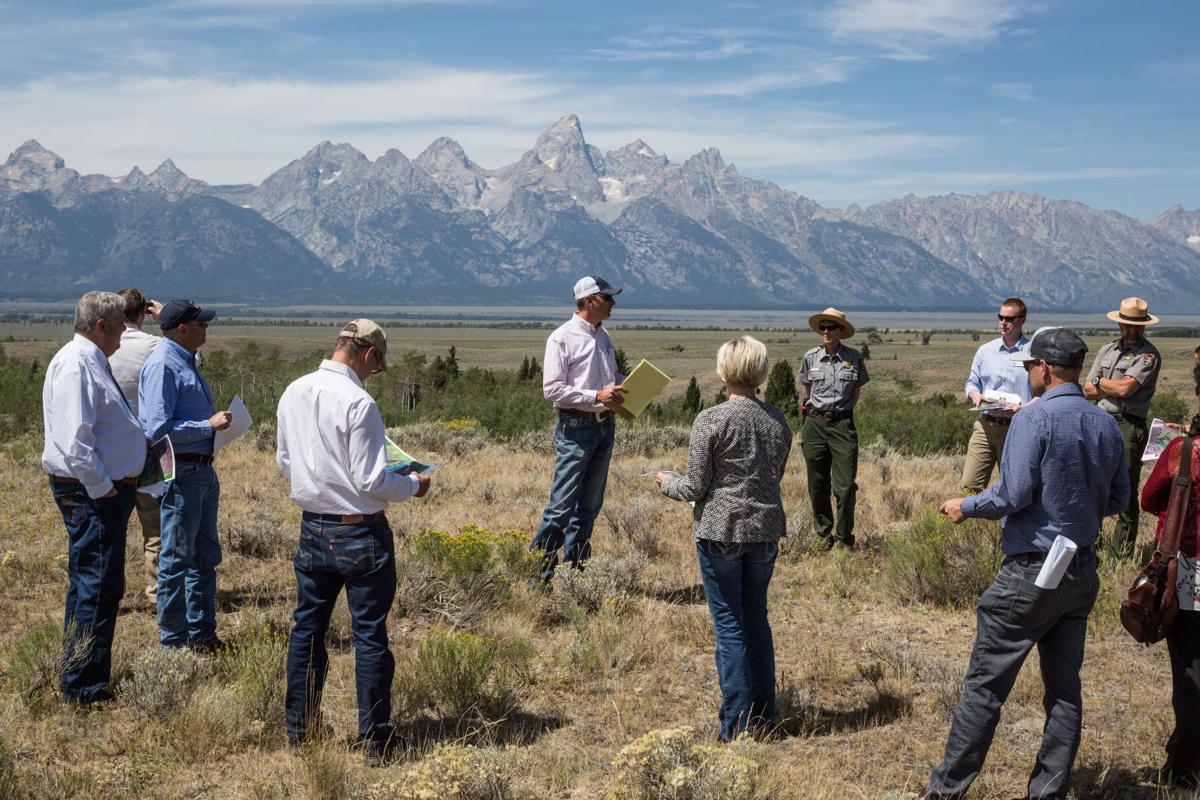 Jason Crowder, deputy director of the Wyoming Office of State Lands and Investments, talks about the 640-acre parcel of state land northeast of Kelly last Wednesday. The group got a boots-on-the-ground look at the Kelly parcel and a state-owned parcel south of Teton Village, as officials consider ways to generate more revenue from the land.

Jason Crowder, deputy director of the Wyoming Office of State Lands and Investments, talks about the 640-acre parcel of state land northeast o…

Wyoming State Treasurer Curt Meier stood in the sagebrush near the east edge of Grand Teton National Park overlooking the Tetons, his feet planted on some of the most valuable land possessed by his state.

The former longtime Republican state senator, who now sits on the State Board of Land Commissioners, reviewed a map that showed the location of a scenic easement lining both sides of the Gros Ventre Road. Because all other sides of the 640-acre parcel were surrounded by either the national park or Bridger-Teton National Forest, the easement would prevent any new roadbuilding and essentially render the state-owned inholding undevelopable.

Slowly, it sank in with Meier just how restrictive the easement was.

“Somebody else did that deal — it wasn’t us,” he said. “It’s beautiful, but we have limited possibilities here with that easement.”

Meier shook off a shared laugh with state Sen. Mike Yin, D-Jackson, and Wyoming Office of State Lands and Investments staffer Holly Dyer over his reluctance coming to terms with the situation. Then he proposed a workaround to the restrictive scenic easement.

“Elon Musk already solved this problem with his tunnel,” Meier said. “You could run it over there, go underneath [the easement] for $10 million, and pop up any place in this section.”

The state treasurer’s outside-the-box thinking was not because of a personal zeal to see a bunch of luxury homes be built up along the east boundary of one of Wyoming’s two crown-jewel national parks. Rather, it’s his fiduciary duty — directed by the Wyoming Constitution — to squeeze as much capital as he can out of the valuable parcel, which is part of a statewide complex of lands that are monetized to help fund the state’s schools.

The State Board of Land Commissioners, which typically has the final say on what becomes of Wyoming’s property, consists of Meier, Gov. Mark Gordon, State Auditor Kristi Racines, Secretary of State Ed Buchanan and State Superintendent of Public Instruction Jillian Ballow. Those five have plenty to do other than surveying their hundreds of school trust holdings in person, but that’s exactly what they were up to on Aug. 11. The day was consumed by a public meeting, site visits and banquet, all centered around the future of 7 square miles of trust land the state owns within Teton County.

The impetus for the gathering was a 2020 bill approved by the Wyoming Legislature that targeted Teton County, demanding the Wyoming Office of State Lands and Investments study development and profit-generating scenarios for its 4,655 acres of land in the county, which are spread among 18 parcels.

The state office subsequently put out a call for proposals, learning that interest was scant in changing many of the parcels, some of which are wholly surrounded by federal lands. But with others there was an appetite to put to use parcels that are mostly fallow, functioning mostly as wildlife habitat and rangeland for cattle. Thirty or so development and land conservation proposals were received during an open solicitation process last fall.

In a Grand Teton National Park auditorium last week, Office of State Lands and Investments Deputy Director Jason Crowder hit the high points on six parcels that have the most development potential. They included the square-mile tract of state land bordering Highway 390 just south of Teton Village, another 640-acre section on the low slopes of Munger Mountain and the park parcel, where Meier and others toured later that afternoon.

“When this bill came out to study these lands in Teton County, I have to say at first I was not enthused, only because I didn’t quite understand why Teton County was being singled out,” state Sen. Mike Gierau, D-Teton, said at the meeting.

But Gierau added that he was “heartened” by some of the conversations taking place.

A revenue-generating idea discussed that had traction with the state and land protection professionals in attendance was the concept of “conservation leasing.”

“We see uses of this type of lease in many different forms,” Crowder said. “Obviously here in Teton County, it would be for protection of the viewshed and available habitat on those parcels.”

Jackson Hole Land Trust Executive Director Max Ludington spoke and pledged that his organization would be a “willing” and “action-oriented partner” that would help devise creative solutions.

“We do have the ability to hold term easements,” Ludington said. “That is a tool that we could potentially pursue.”

More than one person who spoke at the public hearing described the State Board of Land Commissioners’ position as “unenviable,” having to both maximize funding for Wyoming students and, ideally, also do right for the land and community.

“This is more than just a state asset,” Teton County School District Vice Chairman Bill Scarlett said. “This is an international gem, and we need to work hard to do the right thing so everybody involved is successful.”

Former Teton County Commissioner Leslie Petersen urged the state office to take the long view and to prioritize qualities like the scenic viewscape and wildlife that promise to keep Jackson Hole’s land values sky high — and thus valuable to the school trust.

“I remember so well when we sold the Boyles Hill school section,” Petersen said. “It was the late ’70s, and that 640-acre school section sold for $5 million. We all thought, ‘Geez, that was a hell of a bundle for the state, what a good deal that was.’”

Now, she added, there’s not a house on the hilly portion of that parcel worth less than $10 million.

“How stupid that looks now, that sale,” Petersen said. “And that isn’t that long ago.”

“It’s beautiful, but we have limited possibilities here with that easement.” —Curt Meier, state treasurer

One trust parcel sale that has favor with many in Jackson Hole is that of the Kelly parcel, where Meier and the others toured.

“The obvious solution there is for it to be a part of Grand Teton National Park,” Dan Schlager, Wyoming state director for the Conservation Fund, said at the public hearing.

The Wyoming Office of State Lands and Investments and its board have expressed interest in executing that sale, too, but they cannot dispense of any school trust lands outright without a competitive auction. The exception is if the Wyoming Legislature agrees to it. Last session, Rep. Andy Schwartz, D-Teton, tried to shepherd through a bill that would have authorized such a sale, but the legislation failed after Natrona County Rep. Steve Harshman successfully amended the bill to set the floor price for $3.2 billion, or $5 million an acre.

On the House floor at the time, Yin hinted at the lunacy of the asking price by pointing out how Occidental Petroleum sold 1 million southwestern Wyoming surface acres and 4.5 million mineral acres for $1.3 billion.

“Is the Kelly parcel in Grand Teton National Park worth three times as much as southwest Wyoming?” Yin asked his fellow representatives.

The Grand Teton National Park Foundation is commissioning a new appraisal for the undevelopable tract. That’s a necessary step if the state of Wyoming and National Park Service are going to do a deal.

The Kelly parcel was last appraised at $39 million in 2016. That valuation was actually a decrease from a 2010 appraisal that judged its worth at $45 million. The reason for the reduction was the discovery of the 130-acre scenic easement that former Wyoming Board of Land Commissioners President and Gov. Cliff Hansen enacted in 1965, according to reporting from the online news outlet WyoFile.com.

But Wyoming rejected the reduced appraisal. Fortunately for the state, land values have since skyrocketed. Schwartz told the News&Guide that he’s talked to some people involved and heard that the Kelly parcel is going to appraise at somewhere between $70 million and $80 million.