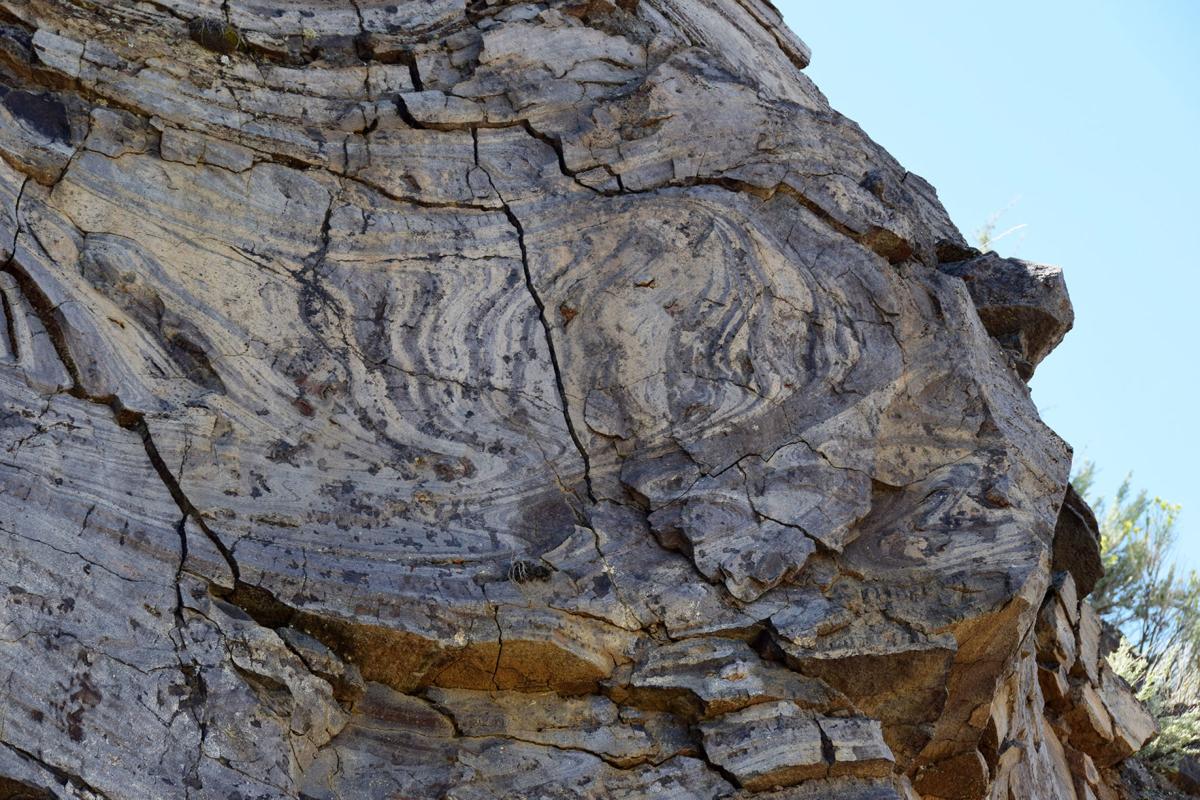 Deformation, or “folding,” within the Grey’s Landing Ignimbrite. This is termed “Rheomorphism” and is a result of the intense temperature of the super-eruption and the pyroclastic density currents that engulf the landscape. As each high-temperature ash particle welds to the land surface (and each other) the growing deposit continues to creep and flow as a searing hot viscous glass. It is for this reason that many Yellowstone hotspot super-eruption deposits are described as “lava-like” despite being deposited from currents of hot gas and ash. 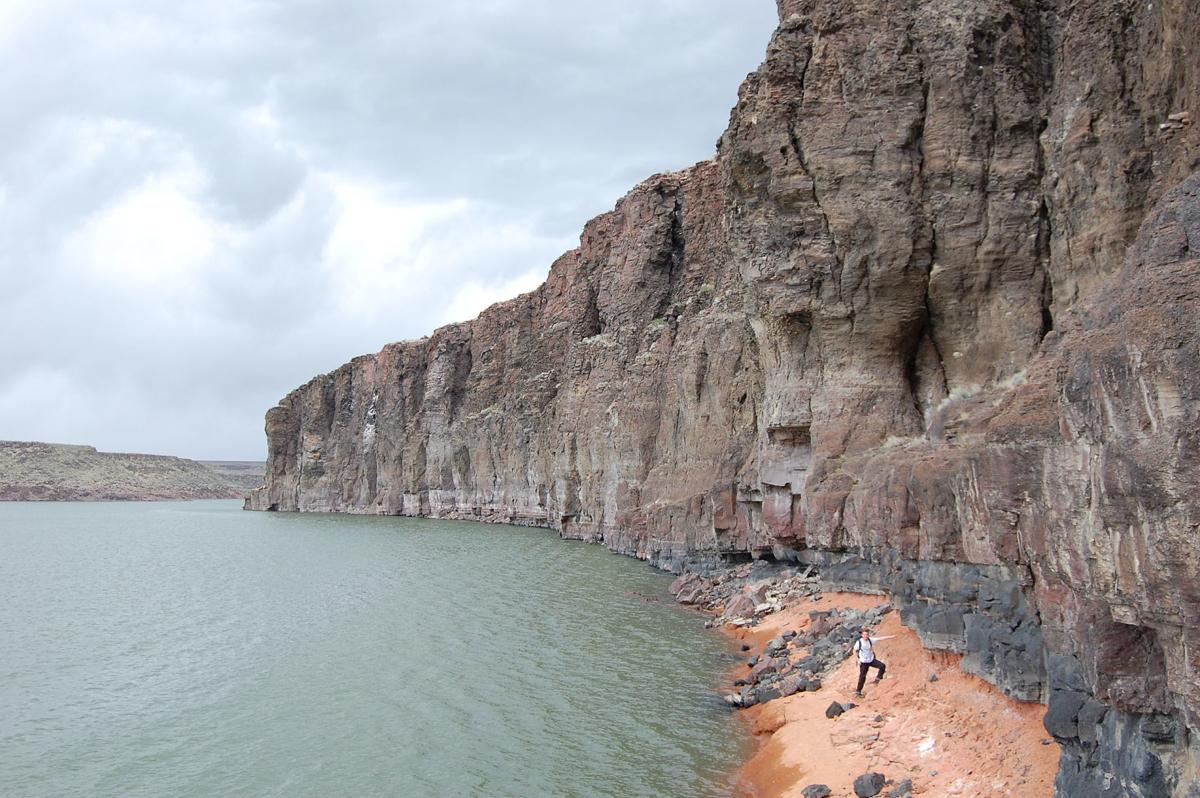 Dr. Tom Knott is pictured for scale at the base of the Grey’s Landing Ignimbrite in Idaho. The entire cliff, and more not seen, would have been deposited in a matter of moments as it welded to the land surface. The bright orange layer represents the upper land surface soil at the time, which has been burnt and baked to terracotta. 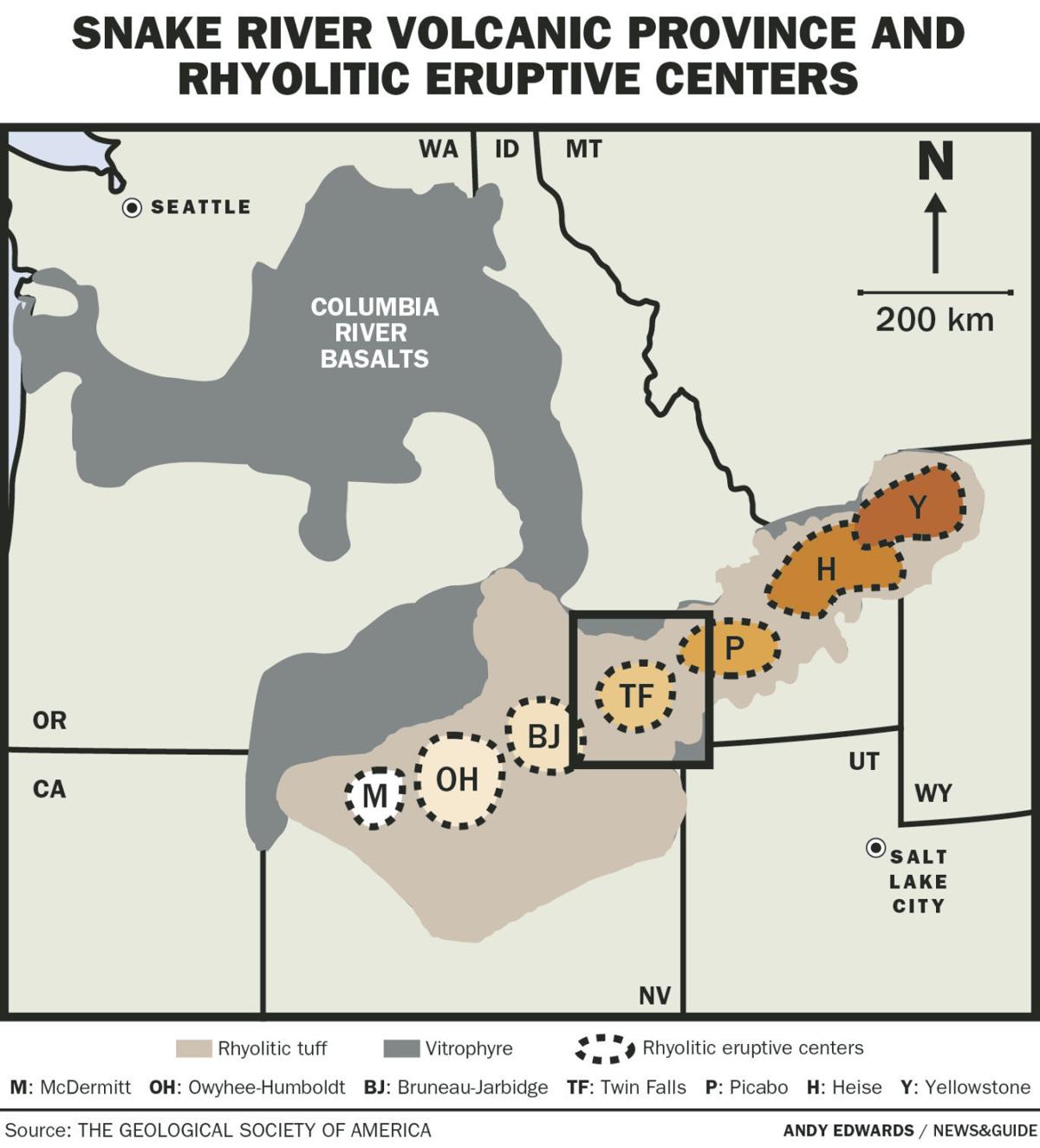 Multiple intensely-welded ignimbrites resulting from large-scale, high temperature Yellowstone hotspot eruptions. The upper cliffs are the stacked deposits of the McMullen Creek and Grey’s Landing Super-eruptions stretching far off into the distance.

Surveying the Gem State during his PhD and post-doc years paid some revelatory dividends: Knott discovered the 10th and 11th known Yellowstone hotspot “supereruptions,” including the most explosive known event so far. His discovery of two larger eruptions closer together in time to each other than more recent, comparatively smaller eruptions lends credence a theory that the Yellowstone hotspot is waning and — over the very long term — has perhaps lost some of its steam and spunk.

“We don’t have the answer, but the current evidence is that perhaps things are on the decline,” Knott told the News&Guide over the phone from his office in University of Leicester, England.

One reason to think that, he said, is that the Yellowstone hotspot eruptions used to be much larger. The area in southern Idaho and northern Nevada he studied was relatively barren, in terms of known evidence of past supereruptions, going into the research.

But Knott and his team went on to find signs that the caldera went big near modern day Twin Falls about 9 million years ago, when the 8.6-magnitude McMullen Creek eruption blew about 400 cubic miles of earth over a 4,600-square-mile area. Then, about 8.7 million years ago, the 8.8 magnitude Grey’s Landing eruption catastrophically transformed the region, depositing 670 cubic miles of material across a 8,880-square-mile landscape. The latter was the largest and hottest documented eruption from the Yellowstone hotspot.

For comparison, the last-known Yellowstone event, 631,000 years ago, known as the Lava Creek eruption, distributed just 240 cubic miles of magma. The Huckleberry Ridge Tuff eruption 2.1 million years ago was also comparatively smaller. It also occurred nearly 1.5 million years farther back in time than Lava Creek — a threefold decrease in rate of recurrence compared to the time period of Knott’s newly discovered supereruptions.

The Yellowstone hotspot has always been static in place, though it’s always building up and burning through the crust of the earth, which moves with the tectonic plates at a rate of 2.5 centimeters a year to the northwest. The earth surface is therefore essentially being dragged over the hotspot, leaving a “track” along the Snake River Plain that spans at least the last 16.5 million years. While there are 11 known landscape-changing supereruptions over the timeframe, Knott has “no doubt” there are more, older eruptions waiting to be documented along the track.

“Finding new eruptions is very important, but for me — if we can continue finding evidence that the system is on the decline — it’s the ‘why,’” Knott said. “What are the driving mechanisms that are apparently causing the decline?”

Hotspots are found all around the world. Although it appears they’ve played a fundamental role in shaping the planet we know today, they remain relatively mysterious, he said.

“We won’t really know their role until we understand them,” Knott said. “That’s my angle.”

Not all Yellowstone hotspot scientists are on the same page about the idea that the geological feature is waning in intensity and size over time, while blowing less often.

Moose resident and University of Utah emeritus geophysics professor Bob Smith said he believes the hotspot is better capped by the earth than it was 9 million years ago, when it obliterated the area that Knott and his team researched on two occasions. The crust of the earth, he said, about doubled in thickness by the time it got to the caldera’s present location.

“You’ve got a candle and you’ve been burning a thin layer of wax,” Smith said, “and then suddenly it hits an area of wax that’s twice as thick.”

The crust that the hotspot encounters in northwest Wyoming is not only more voluminous, but colder as well. That dynamic will continue for ages to come — until the Yellowstone hotspot moves closer to the location of present-day Billings, Montana, some 10 million years from now, Smith said.

So is the Yellowstone hotspot in the process of dying out? Or does a thicker crust in more inland North America in essence more effectively cap the magma flow, stifling larger, more frequent eruptions? At least in Smith’s view, there’s not yet a prevailing view within the scientific community.

“I don’t think many people have thought this out well enough, to be perfectly honest,” Smith said.

Knott is now a University of Leicester professor, and his research and ideas were recently featured on the blog of the Yellowstone Volcano Observatory, “Caldera Chronicles.” His article was peer reviewed in the April edition of the academic journal Geology. The paper is called “Discovery of two new super-eruptions from the Yellowstone hotspot track: Is the Yellowstone hotspot waning?” It is attached to the online version of this story at JHNewsAndGuide.com. 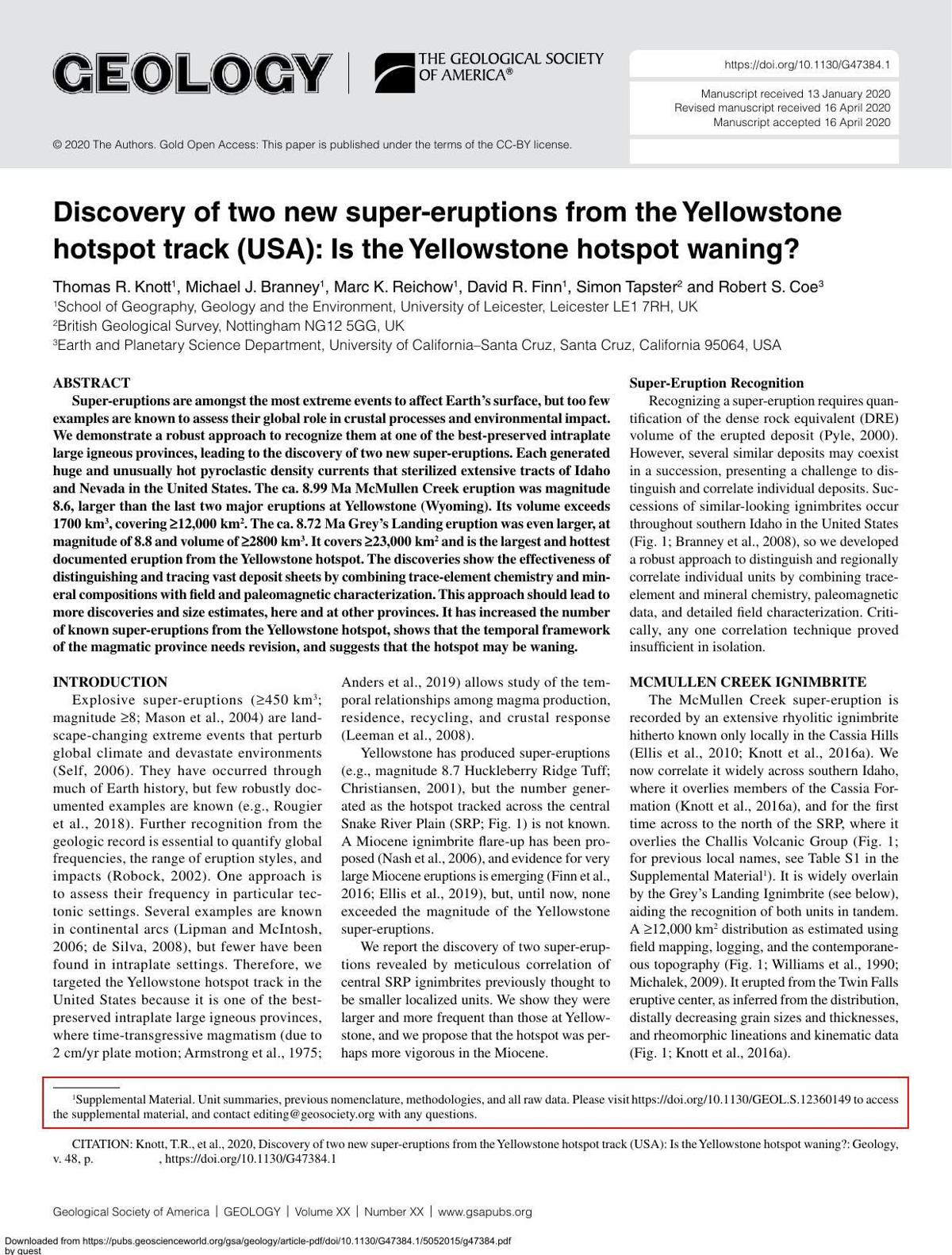