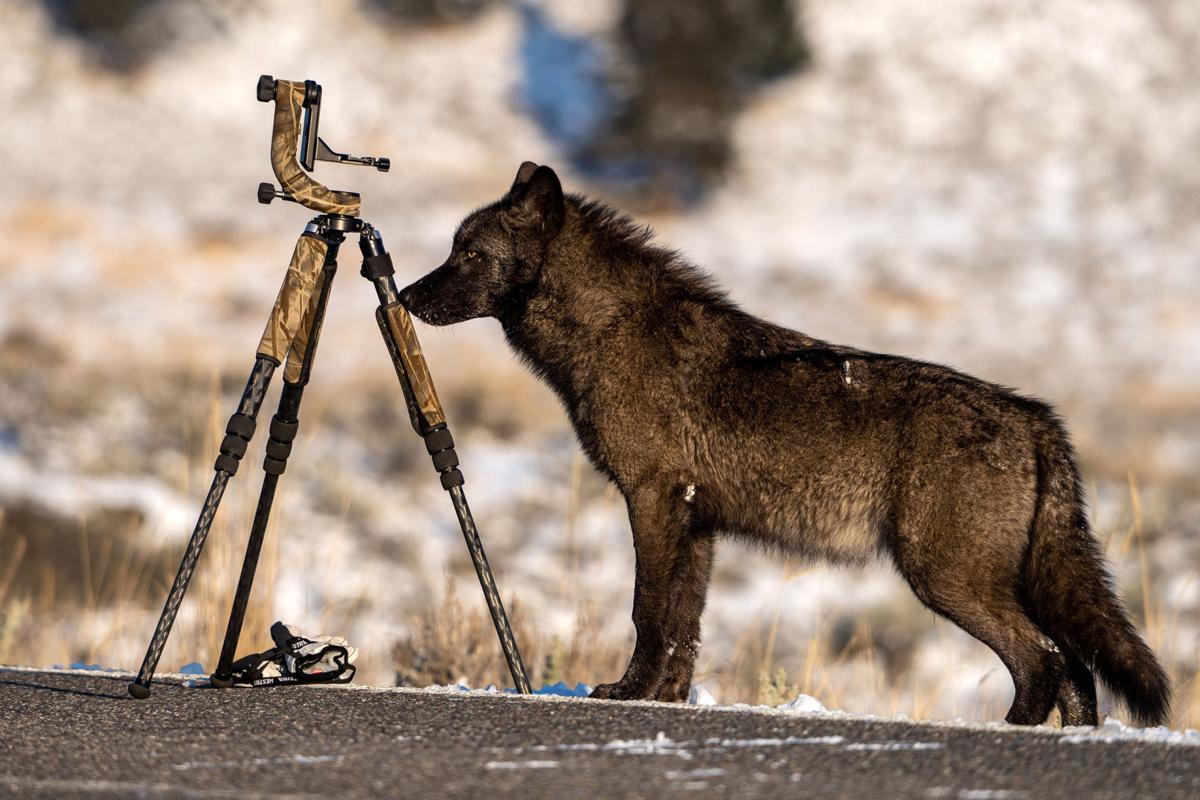 Yellowstone wolf 1273M sniffs a tripod. The wolf eventually walked away with the tripod in its mouth. Park rangers have started hazing habituated wolves to prevent such close encounters.

Wolf 1273M, a male from the Junction Butte Pack, was nearly struck by a photographer after running off with a tripod in his mouth in Yellowstone's Northern Range.

Colleen Marzluff whistled to her ornithologist husband, John, as he was looking for a raven nest in a string of trees on the low southern flank of Yellowstone’s Bison Peak.

Since Colleen had taken on the “sentinel” role, John knew that something furry and large was probably entering the area.

“I heard the whistle, no problem, and I thought, ‘Oh, it’s a bison coming in,’” John recalled of that late spring day in 2020. “It was a really closed-in area, and I couldn’t see anything.”

Colleen had spotted a couple of wolves — members of the Junction Butte Pack — just over a ridge to the south. One of the canines bolted upon hearing Colleen’s whistle, but the other animal, a black male that would become known as Wolf 1273M, was clearly curious and interested in the humans treading on its turf.

“The wolf absolutely followed my tracks,” John said. “He was just coming towards us.”

The raven researchers weren’t scared. Instead, at first, they were thrilled about the sighting.

But then Wolf 1273M became a bit too interested, totally unperturbed by their presence. He followed the corvid scientists, trailing them at about 20 feet away as they retreated from the area. They waved their arms, yelled at the canine and lobbed rocks.

Still, the wolf appeared unfazed. They pulled out their pepper spray and kept moving downhill rapidly. Step by step, perhaps for a half a mile, the wolf closely followed.

“It went from the ultimate wildlife day,” John recalled, “to, ‘Uh oh, we’ve got an issue to deal with now.’”

John finally thought, “screw it,” this wolf needs to learn a lesson. He removed the safety from his bear spray and pulsed the capsicum solution three times in Wolf 1273M’s direction.

“He did not drop or whine or roll or anything, but it clearly sent him a signal,” John said. “It must have got a nose full of the stuff.”

At a greater distance the wolf paralleled them and then angled off toward Slough Creek, ending the encounter.

The Marzluffs’ brush was with one of Yellowstone’s most habituated wolves, at least at the time. Wolf 1273M was raised by the Junction Butte Pack at a 2019 den site just a few hundred yards off the Slough Creek Trail. Fishermen, photographers and hikers frequently crossed paths with the pups that year, and the proximity and interactions at an impressionable age led to animals that became perilously unafraid of humans.

“They’re little puppies, and you’ve got to stay away from them, or they grow up to be bad,” Yellowstone Senior Wildlife Biologist Doug Smith said. “That’s what happened to 1273.”

Two 7-month-old wolves from that litter were hit and killed on roads that year.

Wolf 1273M lived on, but with an unnerving and potentially hazardous comfort around people.

Smith and his staff have grappled with more than the Junction Butte pack when it comes to human-conditioned wolves in recent years. This past winter the Wapiti Pack often traveled the groomed, compacted roads that cut into Yellowstone’s interior.

“They were on the road that leads into Old Faithful,” Smith said. “Snowmobilers were sitting there 10 feet away from wolves.

“Everybody’s just kind of enjoying themselves, but this could lead to the demise of the Wapiti Pack,” he said. “Everyone wants to see a wolf and get a picture. We’re not asking you to blast by them, but we are asking you to get as far away on the road as you can and slowly drive by.”

At one point in the winter some of the Wapiti Pack members split off to the south, heading into Grand Teton National Park. They continued their habit of using the road — except this time a plowed route with vehicle traffic — and were nearly hit by a plow truck, Smith said.

The Yellowstone Wolf Project staff wanted to avoid killing the Wapiti Pack animals, which is an outcome they’ve turned to before when trying to do away with human-conditioned, potentially dangerous behavior.

“These things can have bad endings,” Smith said. “We’ve killed two. If they get too comfortable and too habituated, we’ll take them out.”

One wolf killed years ago met its demise after chasing a cyclist and motorcycle. The other wolf was killed after sticking its head into open car windows.

Offenses that are met with a death sentence are subjective, but before Smith had to make any tough calls about the Wapiti Pack he turned to Yellowstone’s habituated wolf management plan, which allows for hazing. He sought and received permission for rangers to ride around on snowmobiles armed with cased shotguns that could propel rubber bullets, bean bags and cracker shells at the Wapiti wolves. They were instructed to fire on the lobos only during “teachable moments,” when they’d associate the pain with their nearness to humankind. On a Monday in mid-February such an opportunity presented itself.

“One of my guys hit him with paintballs,” Smith said.

Time will tell if the aversive conditioning helps the Wapiti Pack turn the corner and act more like wild wolves.

“I’m not saying everything’s hunky dory,” Smith said, “but I think if we’d done nothing we’d have had to kill one of those wolves by now.”

When Yellowstone’s borders closed to visitors for 55 days at the start of the COVID-19 pandemic, Smith’s staff went out “armed to the teeth” with the intent to reverse Wolf 1273M’s conditioning.

“To put it bluntly, we pounded him last spring when the park was closed,” Smith said. “I mean pounded him.

“Any time he was on the road,” he said, “we hit him with paintballs, beanbags, rubber bullets, the whole nine yards.”

Ahead of bringing the pain, the big black male wolf had shown he had lost all apprehension around people. In November 2019 the curious canine once even ran off with a Lamar Valley photographer’s tripod.

“The guy ran after the wolf, because it was an expensive tripod,” Smith said.

When the wolf dropped the camera platform, its owner reclaimed it. But Wolf 1273M wanted it back. A time lapse of images of the encounter provided by Bozeman, Montana, photographer Allan Hathaway shows that the man even took a swing at the wolf to create some separation.

The Marzluffs’ run-in with Wolf 1273M was the animal’s last known up-close interaction with people. Recently the black male paired up with a female and has been spending most of his time far from any road.

That’s a happy outcome from the Marzluffs’ perspective, too.

“We were really worried,” John said. “We thought, ‘Oh man, we’re going to report it and they’re going to kill this wolf.’ So we’re really glad that it’s turned out well.”