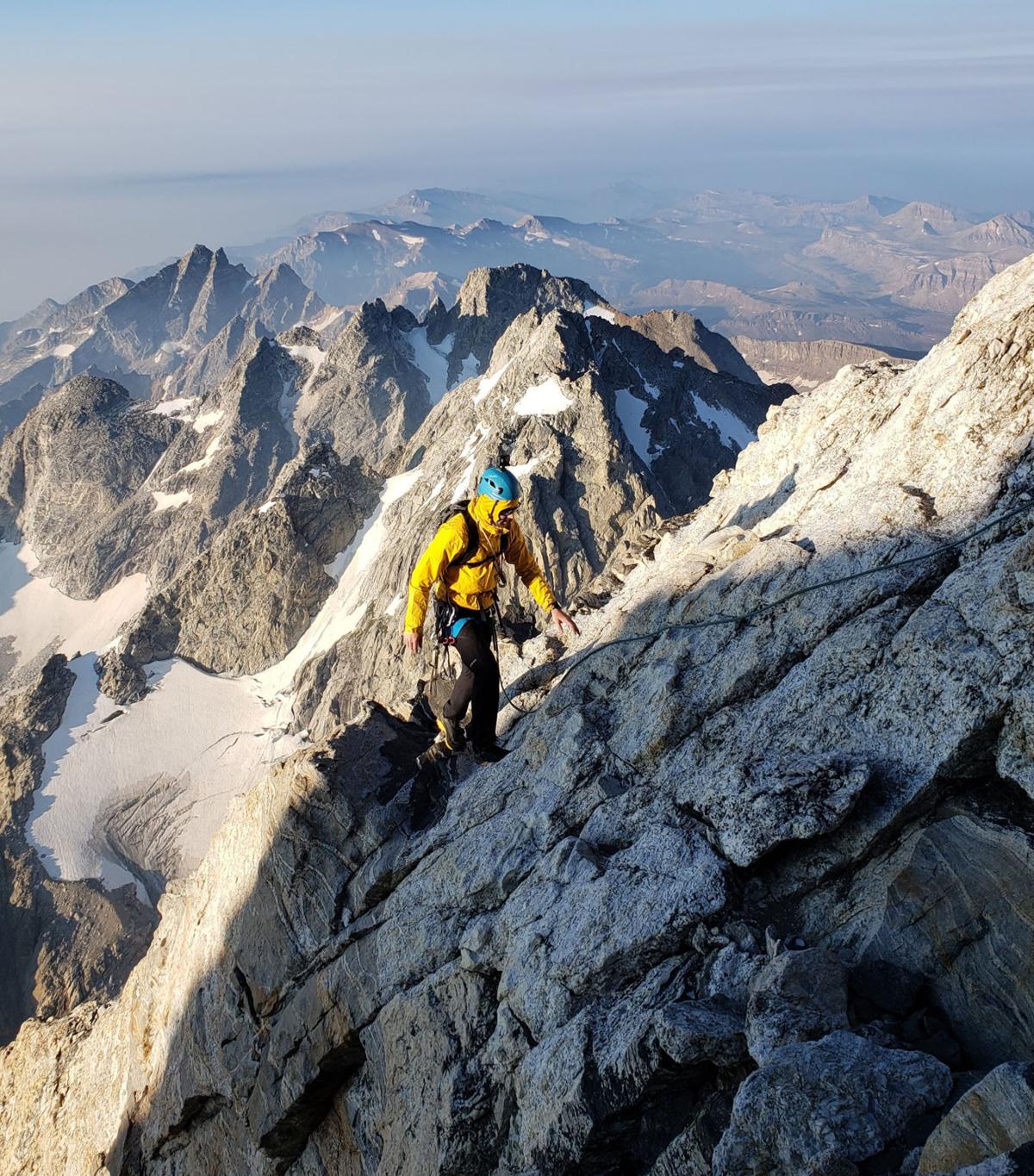 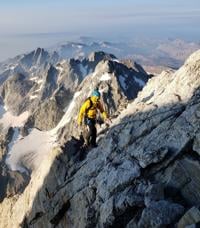 Matt Walker makes his way along the Exum Ridge of the Grand Teton during a climb of the peak on Aug. 21. It was the first time Walker had been on the Grand in 10 years, when he and 16 other climbers in three different groups were struck by lightning on July 21, 2010. One climber in a party separate from Walker’s perished in the incident. 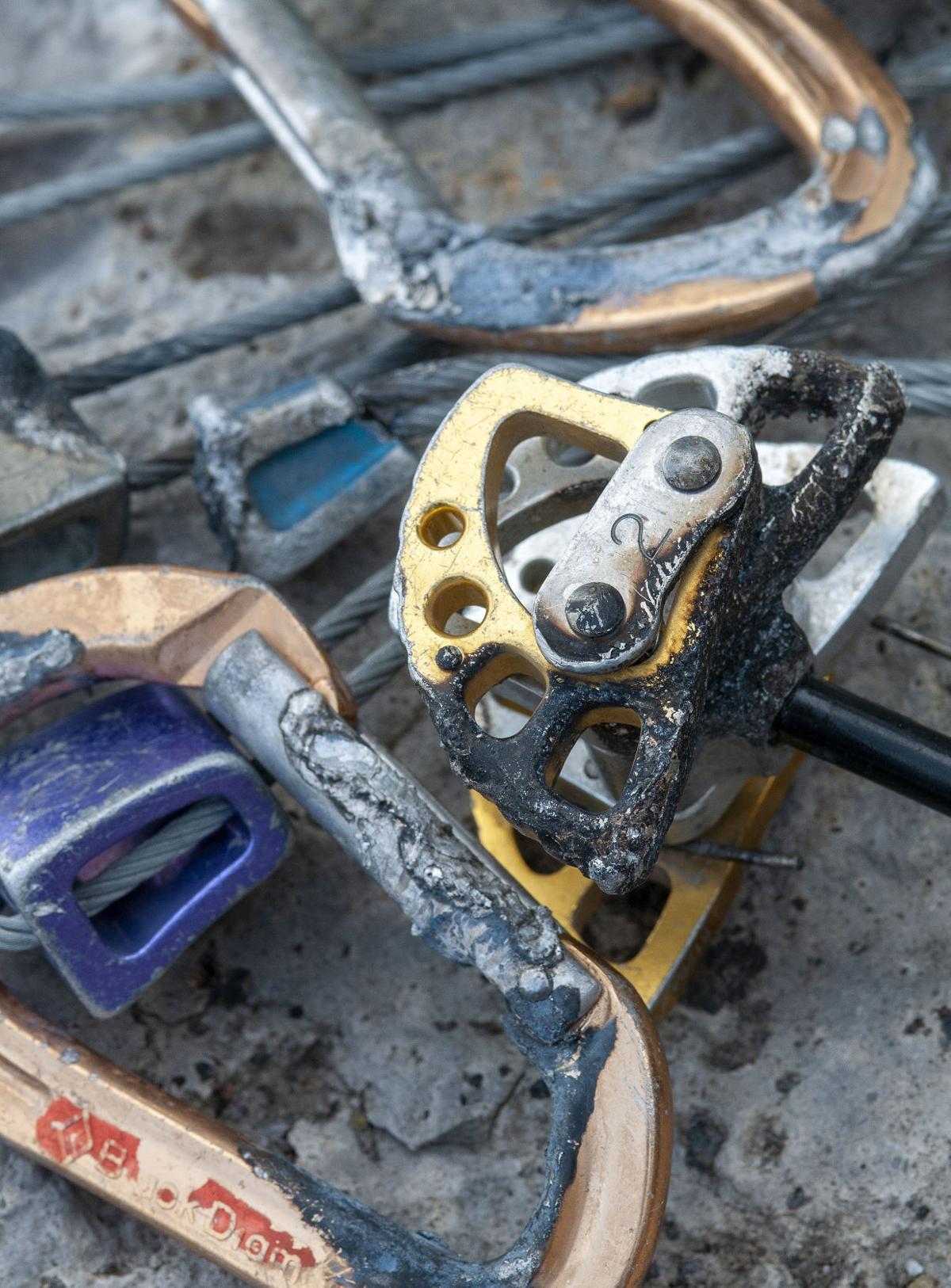 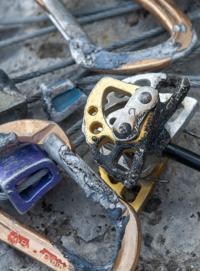 Charred and melted climbing equipment from Walker's party after they were struck by lightning on the Grand Teton in July 2010. 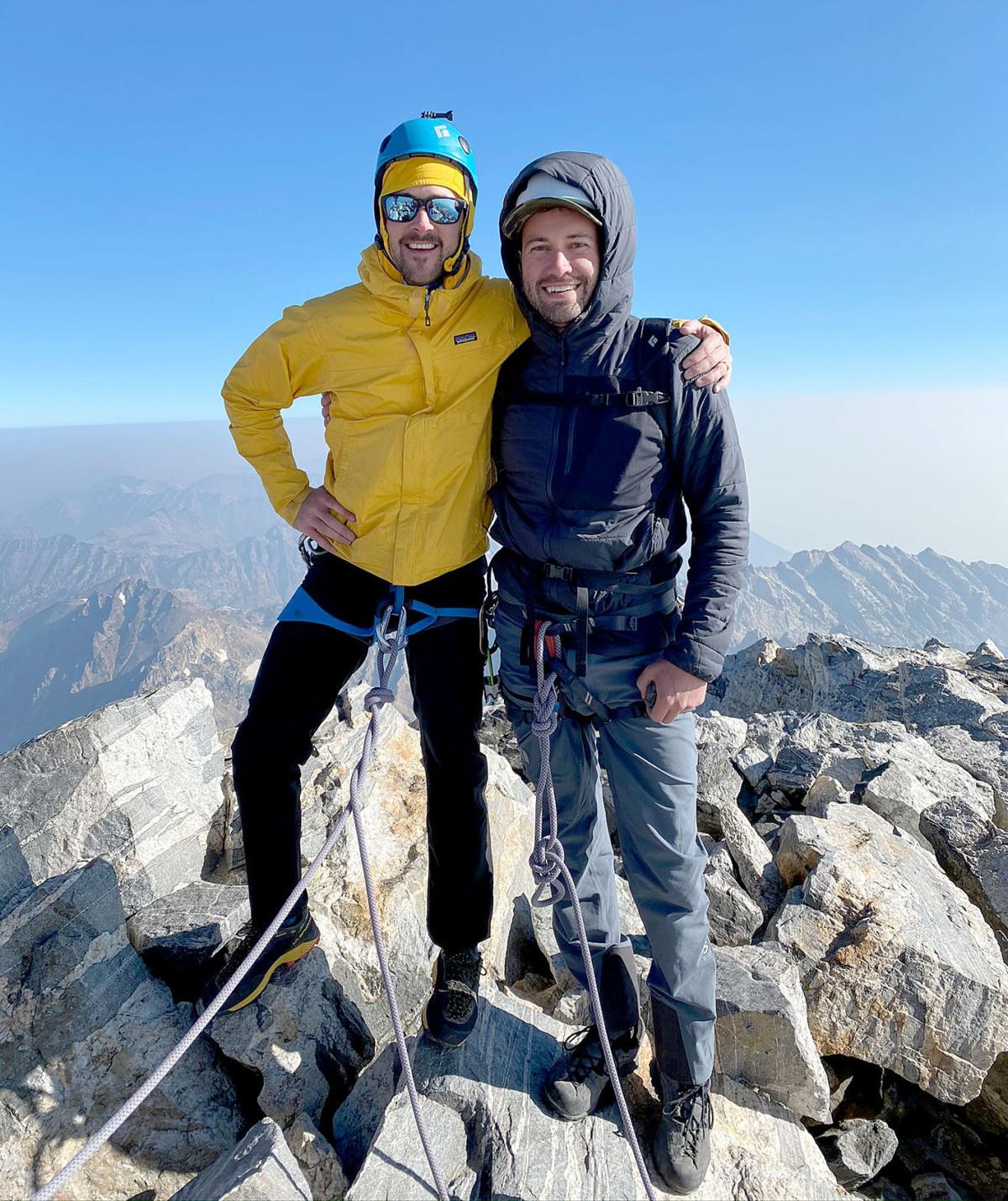 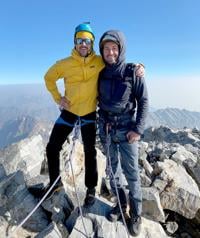 Matt Walker, left, and his climbing partner, Sam Warwood, on the summit of the Grand Teton on Aug. 21.

Emergency transport vehicles from Jackson and Grand Teton National Park stand ready as the park rescue helicopter lifts off to retrieve climbers injured in lightning strikes on the Grand Teton on July 21, 2010.

Matt Walker neared the summit of the Grand Teton on Friday, topping out on the Exum Ridge. The weather was perfect — bluebird, not too windy.

On an Exum Mountain Guides trip with a climbing partner from Big Sky, Montana, the team approached a spot Walker knew well, a corner near the top of the ridge. It was there, 10 years ago, that Walker and a different set of climbing partners were repeatedly struck by lightning.

“I told my buddy that I was climbing with kind of what we’d gone through there,” he said. “Then we kind of came in right around the corner there, and probably another 50 vertical feet and we were at the top.”

That experience, his first time setting foot on the 13,775-foot summit of the Grand, completed a loop that began July 21, 2010. That day Walker and 16 other climbers were caught in a fast-moving lightning storm that pinned them on the mountain.

More than 90 rescuers from federal, state, and local agencies responded, making it the largest rescue effort ever undertaken on the Grand, according to an episode of “The Fine Line” podcast, produced by the Teton County Search and Rescue Foundation.

Ten years ago, Walker’s group was stranded pretty much on the summit of the mountain, while the two other groups were lower but still above the Upper Saddle. Afternoon lightning storms are common in the Tetons during the standard climbing season on the Grand, which is mid- to late summer.

But the weather that day was strange.

“I was at Hidden Falls that morning,” Exum guide Brenton Reagan said. “We hadn’t even gotten onto the rock, and we were in the trees, right by the fence, we were practicing knots and some belaying because the skies started to get kind of dark kind of early in the day.”

Still in the valley, Reagan and his clients called it because the storm was moving in. On the Grand, that was the beginning of a harrowing day.

Meteorologist Jim Woodmency told the Casper Star-Tribune that monsoon moisture from the south created the early thunderstorms, and that the climbers wouldn’t have seen them coming.

Pretty soon, the climbers knew, as the convective storm system lashed the upper mountain, throwing snow, rain and lightning. Nearly all 17 climbers were impacted in some way, showing burns or partial paralysis that made it impossible for them to self-rescue, and Brandon Oldenkamp, 21, died after being struck and falling down the West Face of the peak.

Using cell phones to call basically anyone who would listen, the climbers tried to convey the severity of their situation. The Jenny Lake Climbing Rangers caught the barrage of calls and started planning the rescue.

Reagan headed to the rescue cache to offer his services. Climbing ranger Jim Springer told him he thought they had it under control, but Reagan decided to hang out for an hour.

“Maybe like 10 or 20 minutes later he came over and he goes, ‘Hey, can you be ready to spend a night on the upper mountain in 10 minutes?’ ” said Reagan, who then caught a helicopter ride up in the alpine.

Meanwhile, Walker and his partners, along with the other parties, were doing what they could to make it off the upper peak and reach Reagan and the other rescuers, who were assembling near the Upper Saddle.

Being caught in a lightning storm on a high peak would be difficult to forget under any circumstances, and the traumatic nature of the event seared it into Walker’s memory. Once he recovered, he said, not climbing was “out of the question,” but he still feels some effects from that trip 10 years ago.

“It buggered me up for quite a while, and I still have some PTSD around thunderstorms and, you know, being outside,” he said Tuesday.

Walker’s climbing partners from that day live back East, and he said he wished they could have had the experience of topping out on the same route they were caught on that day. It closed the loop on an experience that few will have in the mountains.

Talking Tuesday, he also described the good parts of that climb, before the lightning storm hit. It had been his first big high-alpine push, and he remembers the feeling of climbing the route, a giddiness at the exposure and joy at the upward movement.

Though it wasn’t one of his favorite days, Walker is glad people still talk about it. The rescue ranks with a select few in the Tetons that are noted for their importance, their difficulty, or their tragic nature, and in an outdoor community that thrives on adventure, that kind of legacy endures.

“It’s touched a lot of people for a long time,” he said. “We were in the wrong place, wrong time … and if anybody can learn from our experience and take that into what they’re doing in the outdoors, that’s the main goal of it.”