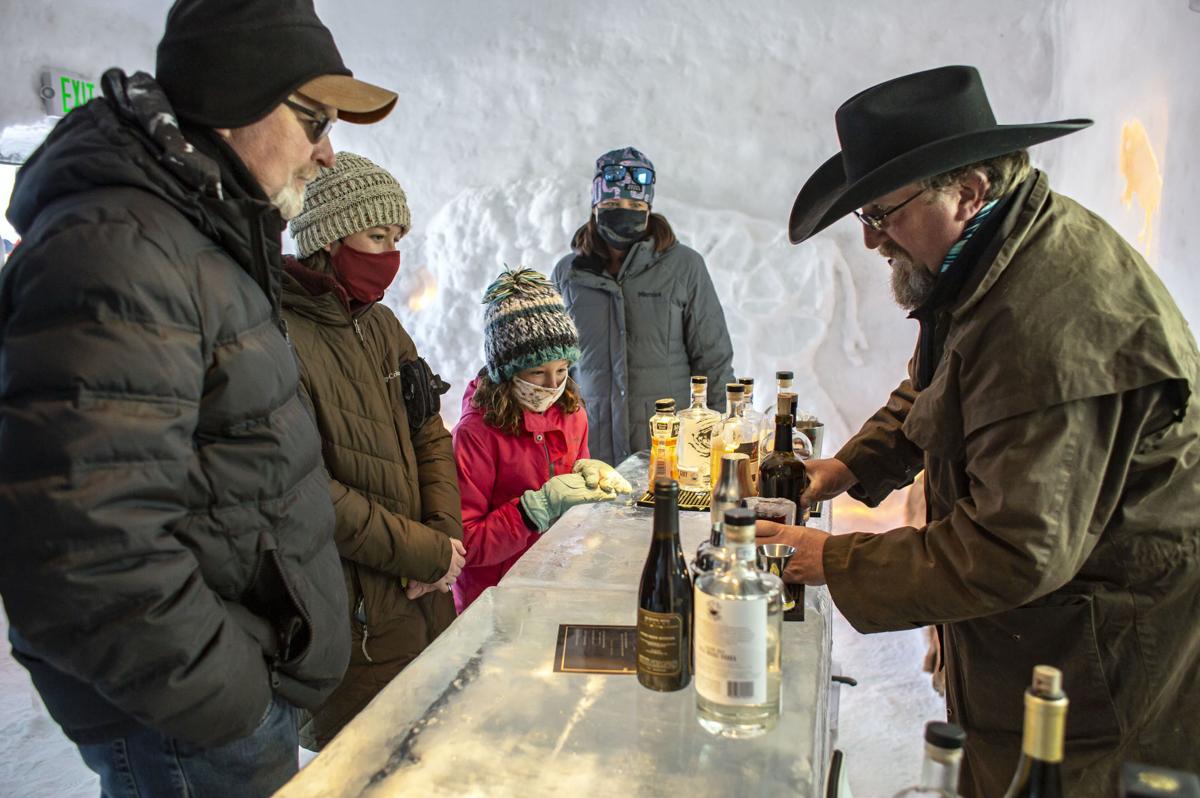 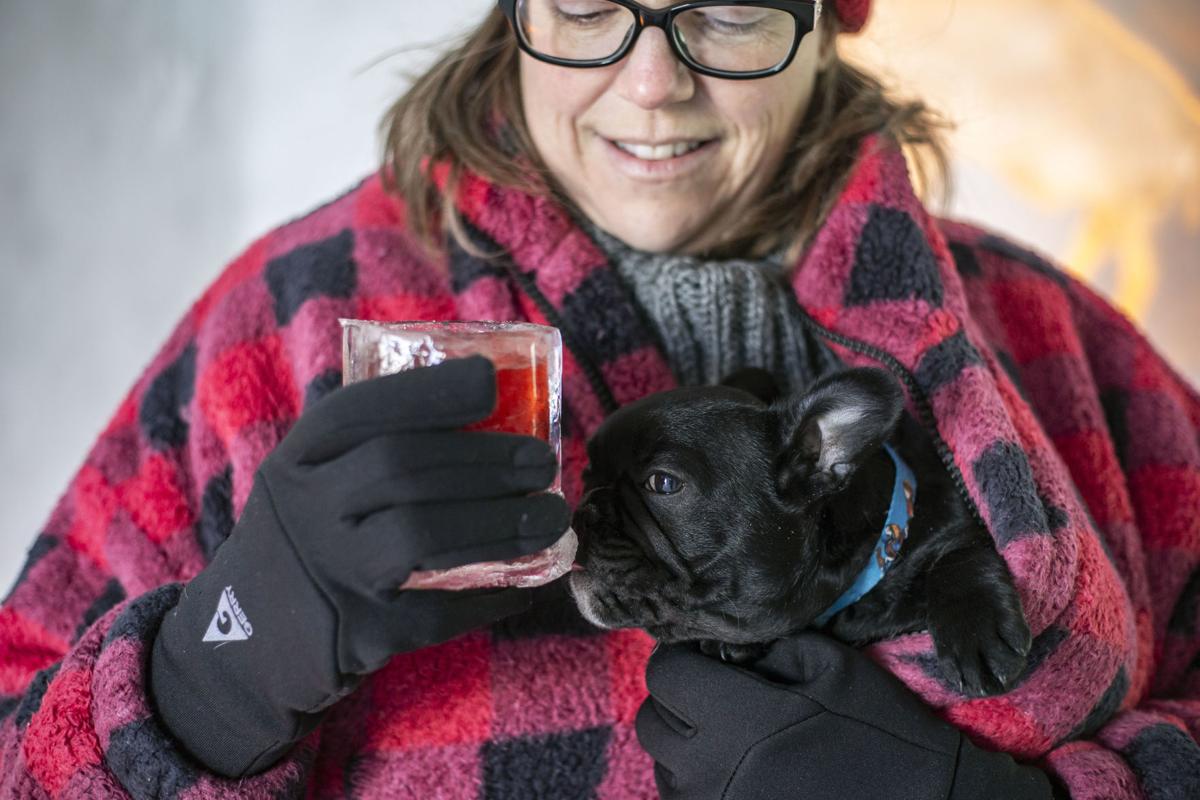 Amanda Fazendin’s French bulldog, Cap, licks an ice glass at the Jackson Fork Ranch Ice Bar on Saturday after the Fat Bike World Championship. Read more about Bondurant’s chillest hangout on page 3A, and the race on 1C. 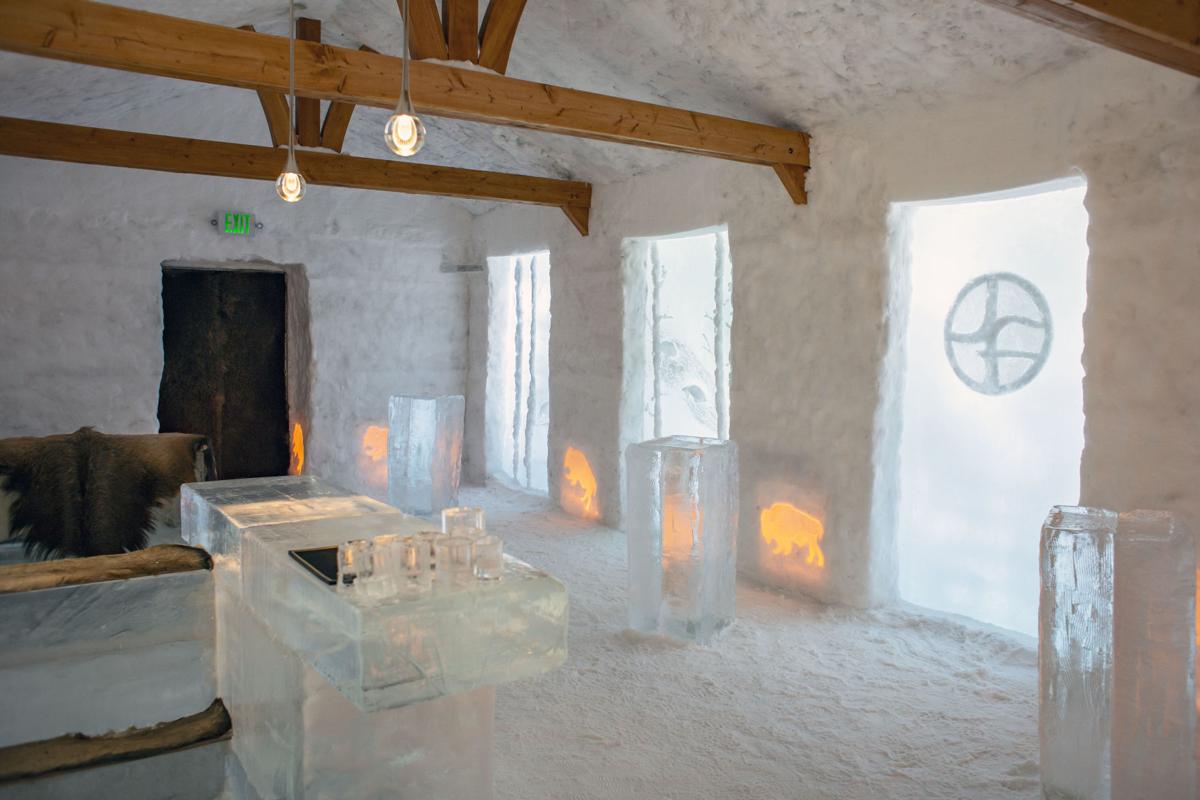 The Ice Bar at Jackson Fork Ranch, which opened on Dec. 20, is made almost entirely of solid ice and compacted snow. Even the drinks are served in ice glasses.

The Ice Bar at Jackson Fork Ranch, which opened on Dec. 20, is made almost entirely of solid ice and compacted snow. Even the drinks are served in ice glasses.

The coldest town in Wyoming now contains another curiosity: the only free-standing ice bar in America.

The Ice Bar at Jackson Fork Ranch was built at the direction of ranch owner Joe Ricketts, who had seen ice structures on his travels and always wanted to create one on his working bison ranch in Bondurant, said representative Morgan Fischer.

The outside of the snow-and-ice structure is nondescript, blending in with small ranch outbuildings. Once visitors pull on the bison horn door handle and step inside, wonder awaits. Glistening blocks of ice form a service bar, cocktail tables and couches. Seating is covered in elk hides with coyote fur armrests.

Created by Mary Gibbons, who worked at IceHotel on the Arctic Circle in Sweden and authored a coffee table book about it, the ice bar interior combines blue, amber and white LED lighting with intricate carving. Gibbons brought in her design-build team Curley Contracting, with her husband Michael Curley, and they hired ranch hands and a local crew to plow and pack snow and erect the building with five wooden trusses, snow blocks and many tons of ice panels trucked in from Idaho and Montana.

At one point during the three-week construction, when the team removed the plywood molds from packed snow and revealed bits of straw, hay and bison patties, Gibbons got a bit demoralized.

“We hand-picked all the hay out of there,” she said, now able to laugh about it.

Then they polished and covered the walls with “snice,” a combination of snow and ice.

Sitting at about 6,600 feet of elevation, 400 feet higher than Jackson, Bondurant is the coldest place in Wyoming, with an average low January temperature of 5 degrees below zero. It’s surrounded by mountains and is a “cold sink,” as Mountain Weather columnist and meteorologist Jim Woodmencey explains.

“When cold air sinks, as it does at night and under high pressure, the cold air builds and has nowhere to drain out,” Woodmencey said.

Before people walk into the ice bar, Fischer hopes they pack along cross-country skis or a fat bike to enjoy an hour or two of solitude along 7 miles of groomed trails on the ranch. Trail passes are sold via GearedUpBikes.com. The Pinedale bike shop owner, Andrew Zook, grooms the trails most days. Or Fischer said smartphone users can scan a QR code at the trailhead and pay electronically. A small ice skating pond allows people to bring their own skates or even try curling.

The winter trail access is part of Fischer’s grassroots community relations and political campaign to gain goodwill after a 45-unit destination resort was denied in July 2020 by Sublette County commissioners.

“I’ve been spending the past six months working with the county, especially some of the critics, to try to reach some kind of middle ground,” Fischer said, “to come up with ways to mitigate their concerns. If we can come up with a plan people like, we’ll probably reapply in the fall.”

On Saturday during the Fat Bike World Championships, the ice bar was hopping, but its location 1.6 miles west of Highway 191 on Upper Hoback Road means it’s usually far more peaceful.

“I’m hoping people will embrace the quietness of it,” Gibbons said. “Mr. Ricketts said it was ‘enchanting’ and that made my lifetime. Especially in these times, I hope there’s a feeling of awe. Just a little escape.”

The ice bar serves an elaborate craft cocktail menu incorporating Jackson and Pinedale spirits. It is open from 1 to 10 p.m. Fridays through Sundays this month; the liquor license is run through the Elkhorn Bar just down the highway, so February weekends and Presidents Day are expected but not yet approved. Small bites are sold, and private event inquiries are welcomed before the spring thaw. Visit JFRIce.bar.