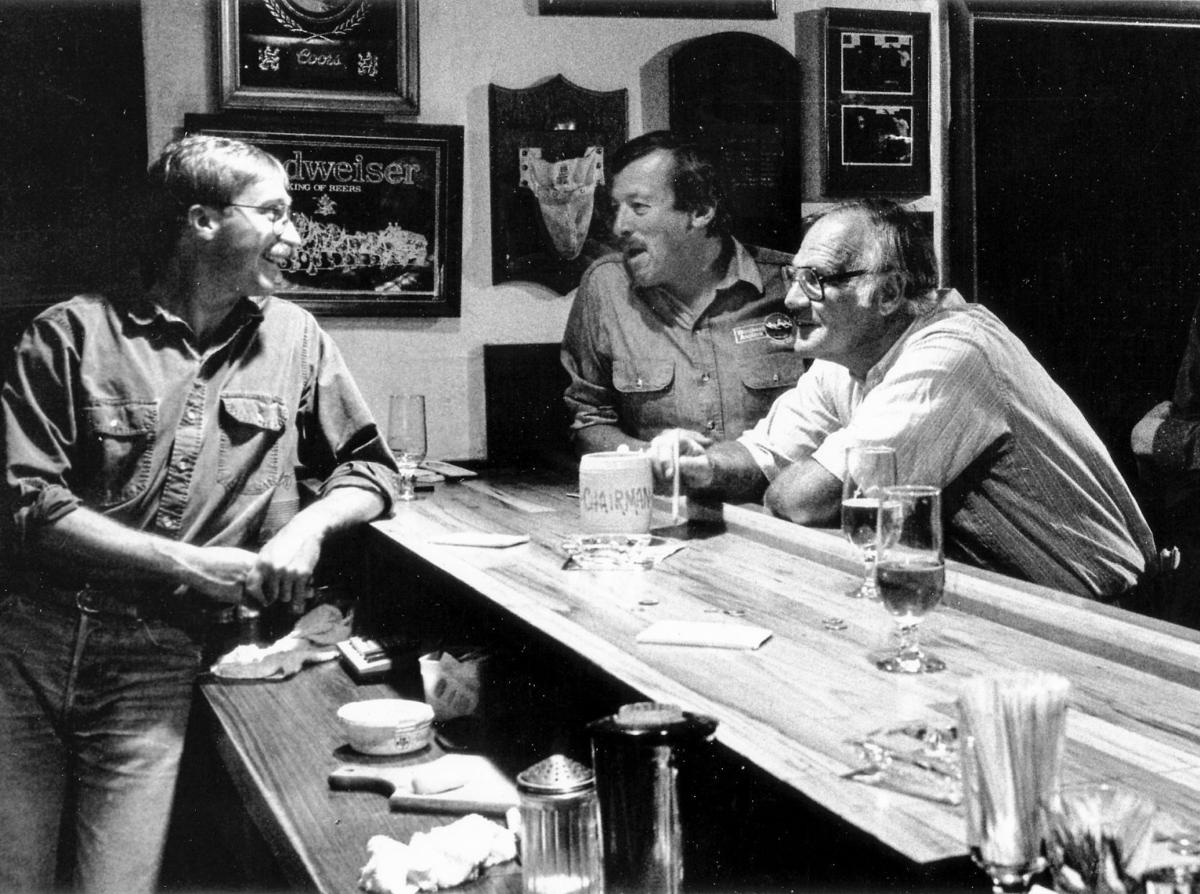 Bartender John Callahan talks with with Denny Ash at the Calico in 1991. 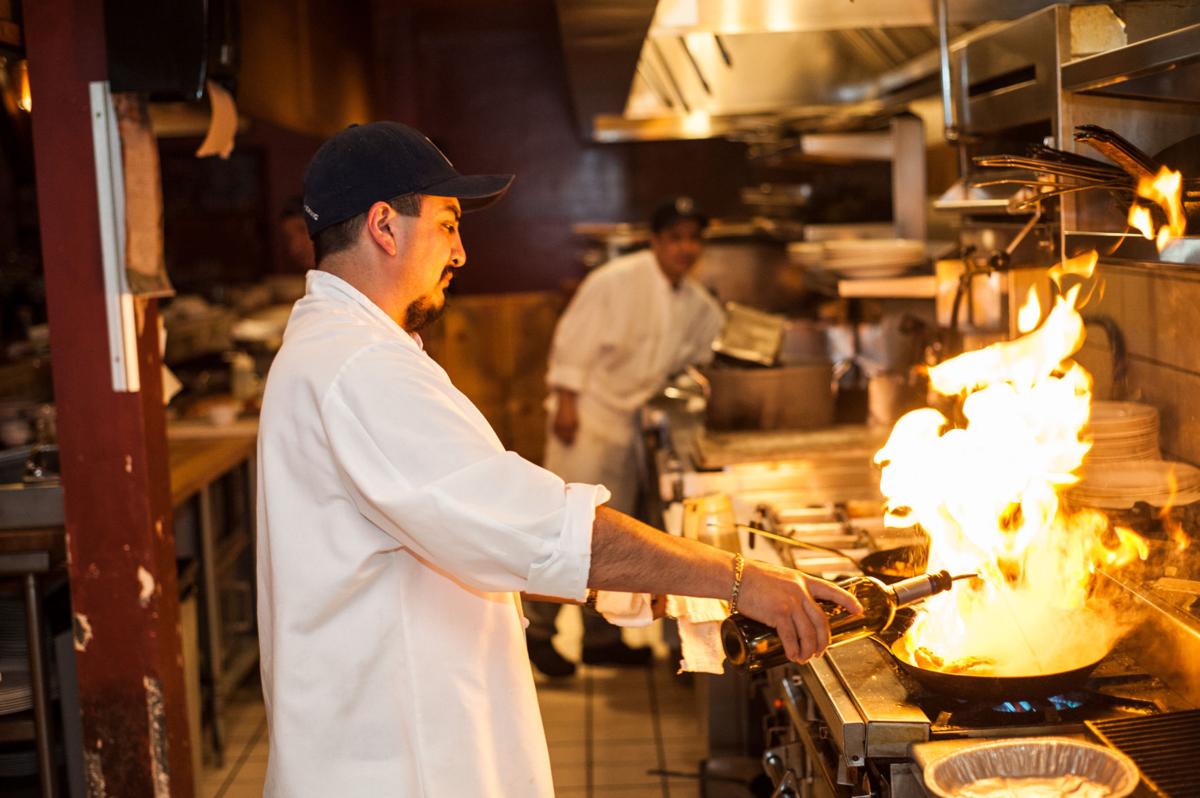 Calico Sous Chef Miguel Garcia fires up another entree for hungry customers in 2011. 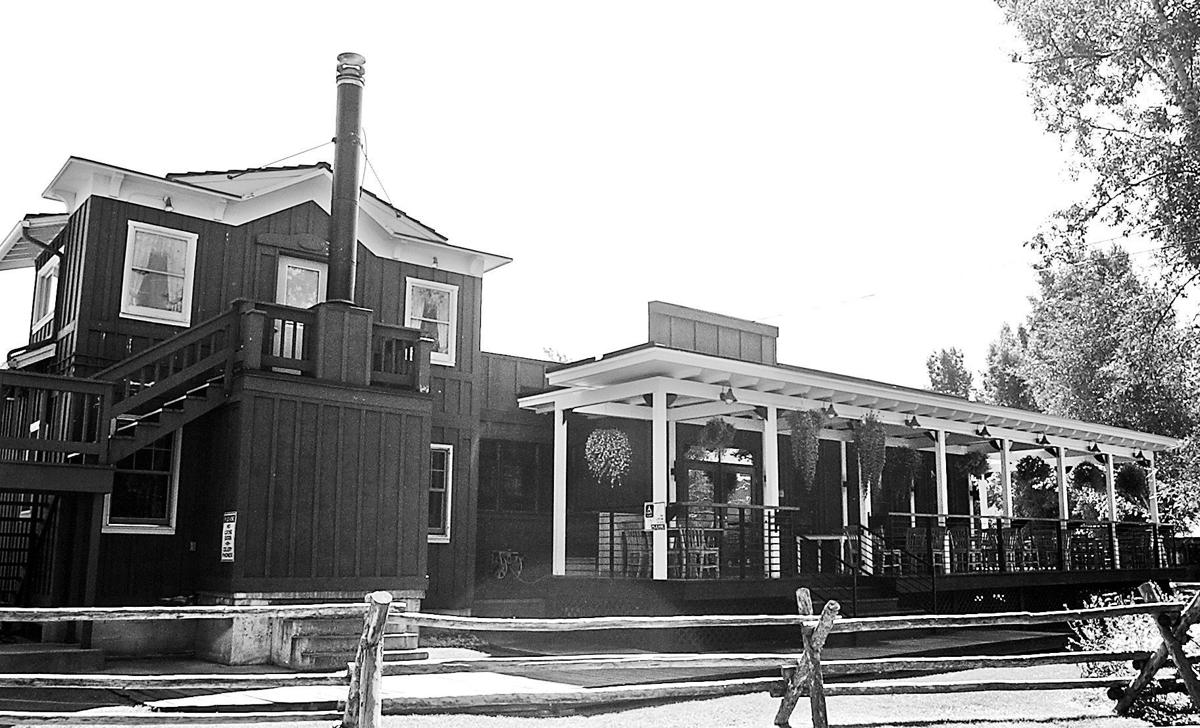 The Calico Bar and Restaurant began as a small pizza place inside an old Mormon church in 1966 but grew into a valley institution. 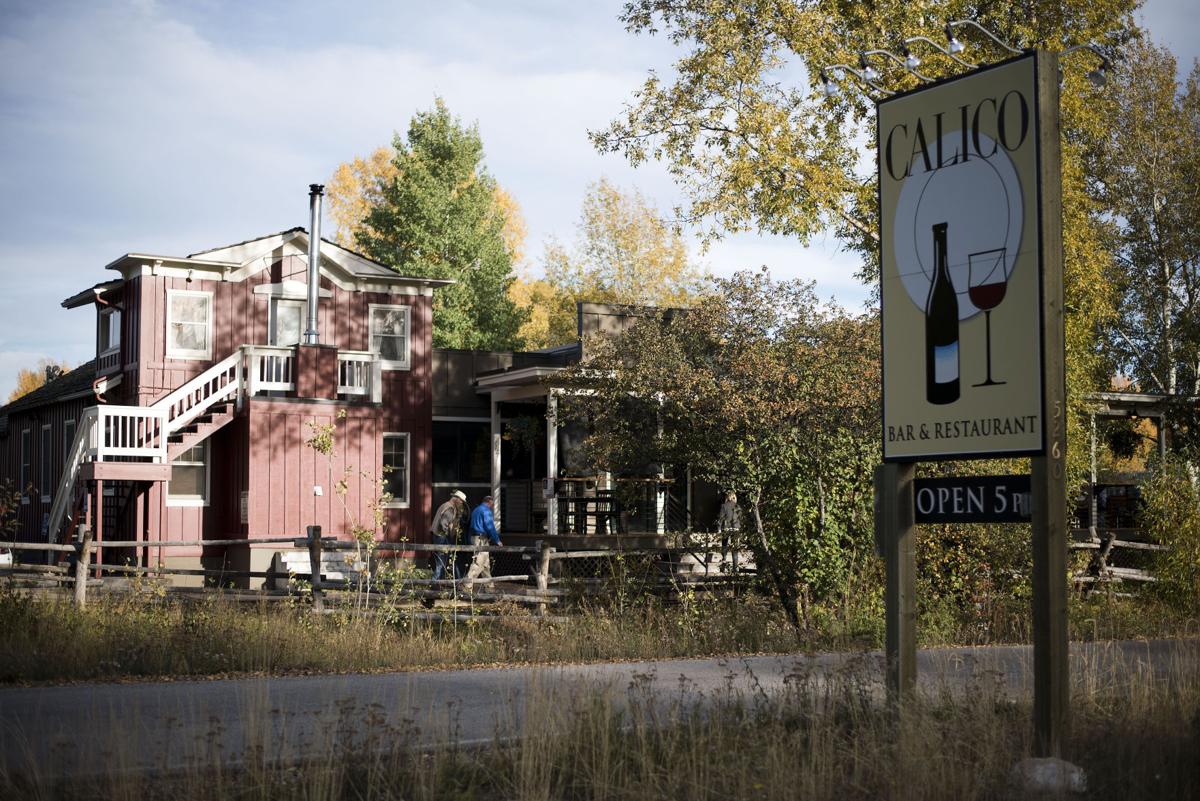 The Calico — on the southern end of Highway 390 near Wilson — is celebrating its 50th year with public specials on Saturday and a private event on Sunday. 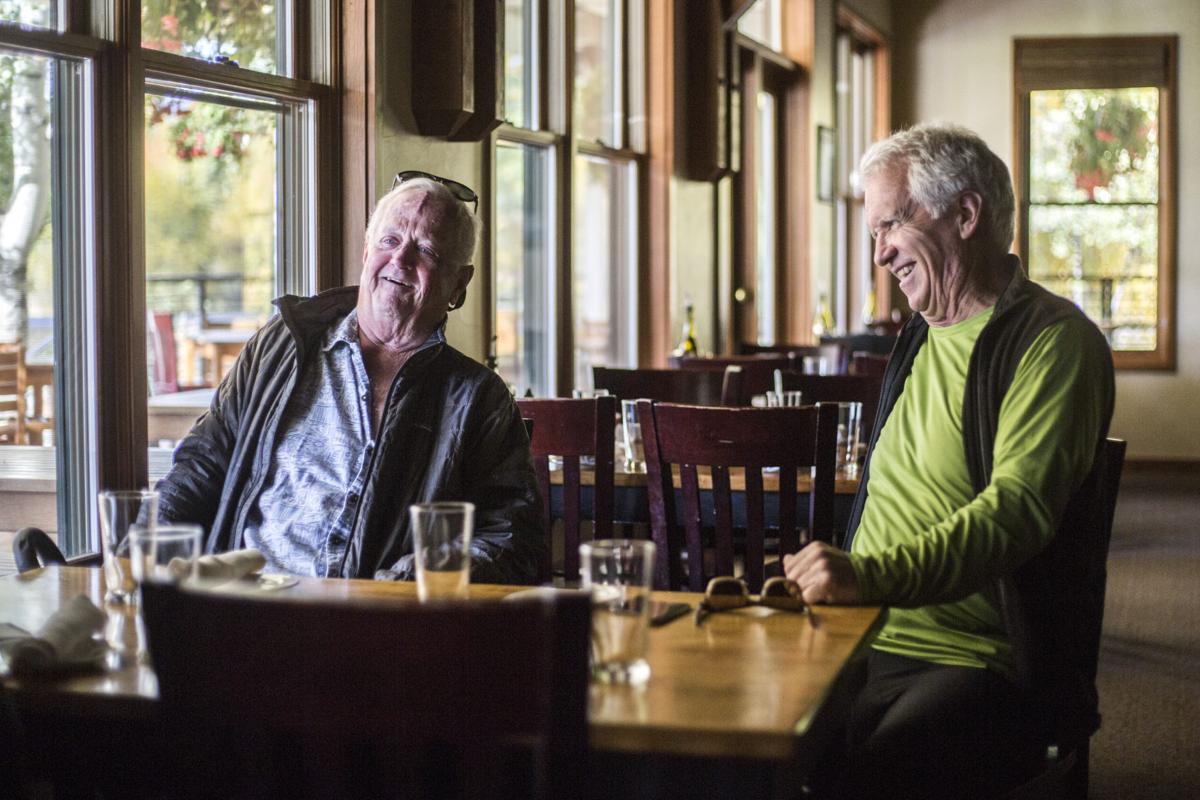 Bartender John Callahan talks with with Denny Ash at the Calico in 1991.

Calico Sous Chef Miguel Garcia fires up another entree for hungry customers in 2011.

The Calico Bar and Restaurant began as a small pizza place inside an old Mormon church in 1966 but grew into a valley institution.

The Calico — on the southern end of Highway 390 near Wilson — is celebrating its 50th year with public specials on Saturday and a private event on Sunday.

When a young ski bum named Tom Jewell bought an old Mormon church for $600 in 1966 and transplanted it to 2560 Moose-Wilson Road, no one would have believed that 50 years later it would still be a pillar in the Jackson Hole community — especially not as a pizza restaurant.

Nevertheless, Calico Restaurant remains, thanks in large part to the sense of community it fostered.

This weekend the restaurant will host its 50th anniversary celebration. On Saturday Calico will be open to the public with a tweaked menu and live music from Uncle Stack and the Attack. Sunday will see a private brunch for 100 to 120 invited “old-timers and past and present employees” — such as Libbe Burchfield and John Callahan, who have worked at the Calico for 30 years.

“When it was built the only thing on the Village Road was the Linn Ranch and two houses,” John Becker, one of Calico’s former owners, told the News&Guide. “At the time everybody said, ‘You guys are nuts, there’s nobody out there.’ But the brilliance of the location is that you get people coming from town to the village and from the village to town. It became a destination for town residents who wanted to get out of town, and it just sort of evolved from there.”

Becker began working as a cook at Calico in 1968, soon after he left the Army. He bought the restaurant in 1975 and began to expand it, building a new restaurant and moving the bar into the old Mormon church.

Becker began working as a cook at Calico soon after he left the Army in 1968 when Tom Mackay owned it. Mackay had helped Jewell start Calico the year before and eventually took it over after Jewell left Jackson looking for warmer weather. In 1971 Mackay decided to expand beyond the walls of the small church and built the restaurant’s first extension.

With the help of two of his ski patrol buddies, Peter Crosby and Don Hansen, and another friend, Butch Burdrick, the group completed the project in three and a half weeks. The additional 1,500 square feet, Mackay said, allowed the restaurant to really take hold in the community.

“We added the new restaurant and bar space in ’71,” he told the News&Guide, “and people made that their center, they were here all the time. The Mormon Church was used as a space for children and families.”

In 1975 Becker bought the restaurant from Mackay and continued to expand it while moving the bar back into the Mormon Church.

“I’m the only guy in the history of the world who turned a Mormon church into a bar,” Becker said. “It’s a great source of personal pride.”

After expanding the restaurant Becker and his staff began to explore how they could incorporate the restaurant’s natural surroundings. One employee, Susan Walker, asked if she could transform an old underused volleyball court into an organic garden. Not only did it come to grow produce for Calico, but it also grew enough to sell fresh veggies to local restaurants, with Walker delivering on bike.

“It was tremendously successful,” Becker said. “Cost-wise it was probably a wash, but it brought us incalculable business. We had people who would come in here four nights a week for our salads.”

It was so successful Becker decided to till an acre and a half in back of the restaurant to use as a farm. Becker’s girlfriend, Theresa Zellmer, among others, then started working full time to tend the gardens. Though it has come down in size in recent years, at its peak, Becker said, the garden was producing 50 pounds of lettuce and spinach a day.

“It was the original sustainable organic garden in Jackson,” he said. “We’ve been organic gardening here for 35 years now. I’m really proud of that.”

Around the same time Becker began mowing and maintaining the fields just to the south of the restaurant, essentially creating the restaurant’s own park.

“I started mowing, and the kids immediately took to it with Frisbees and footballs,” Becker said. “It still works beautiful. You come out here on a busy Friday night and there will be 100 kids out there playing. It’s great.”

After 21 years of operating Calico, Becker was finally ready to get out of the business.

“I had to get out because I was in it for the money,” Becker said, “and not because it was fun anymore.”

He started looking for a buyer but wanted someone who could continue to build upon the restaurant’s community character. Ultimately he reached out to one of his rivals, Jeff Davies.

“I was an old waiter where Stiegler’s is now, and I would hang out here and ski every day,” Davies said. “In 1985 I bought the Rocky Mountain Oyster, which was … below the Mangy Moose, and me and John, we were kind of competitors, but I was still here every day after work.

“I was going skiing one day in 1995 and we were riding up the lift together,” he recalled. “John said, ‘Jeff, I want out. You’ve got to buy the Calico.’ After about three chairlift rides we pretty much had a deal put together.”

Once Davies took the restaurant over, it underwent another face-lift.

“Basically for [Becker] to retire and me to buy him out we really had to change the place,” Davies said. “I mean it was a great place and really busy and everything like that, but my daughter was 2 years old at the time and I just wanted more of an Italian restaurant feel instead of a pizza feel, where families could come with their kids, drink a bottle of wine, and their kids wouldn’t even bother them, they could run around outside.”

The renovations gutted the existing building and nearly doubled the size of the restaurant, adding higher ceilings with large angled beams and installing a new kitchen. Though Davies said it probably would’ve been cheaper to tear it down and start fresh, the old building was full of memories.

“The Calico just has a great feel,” he said. “It’s got great karma. People used it like their living room. They were here every day.”

Despite owning Calico for over 20 years, Davies has no plans to retire and wants to continue to run it the same in the years to come.

“I really considered my retirement when I was young,” said Davies, who is also co-owner of Hatch Taqueria in town. “I came here in ’79 on my bike and waited tables and ski bummed until I bought the Mangy Moose in ’85. I’ve got a pretty good life. I still work but I run every place with managers, so I get to travel a lot.

“You can be proud of this place,” he said of Calico. “It’s a really nice place to own. You see a lot of kids and families grow up. There are a lot of stories you can tell, way too many. It’s been fun.”

Note: This story was amended to add additional information about John Becker. — Eds.