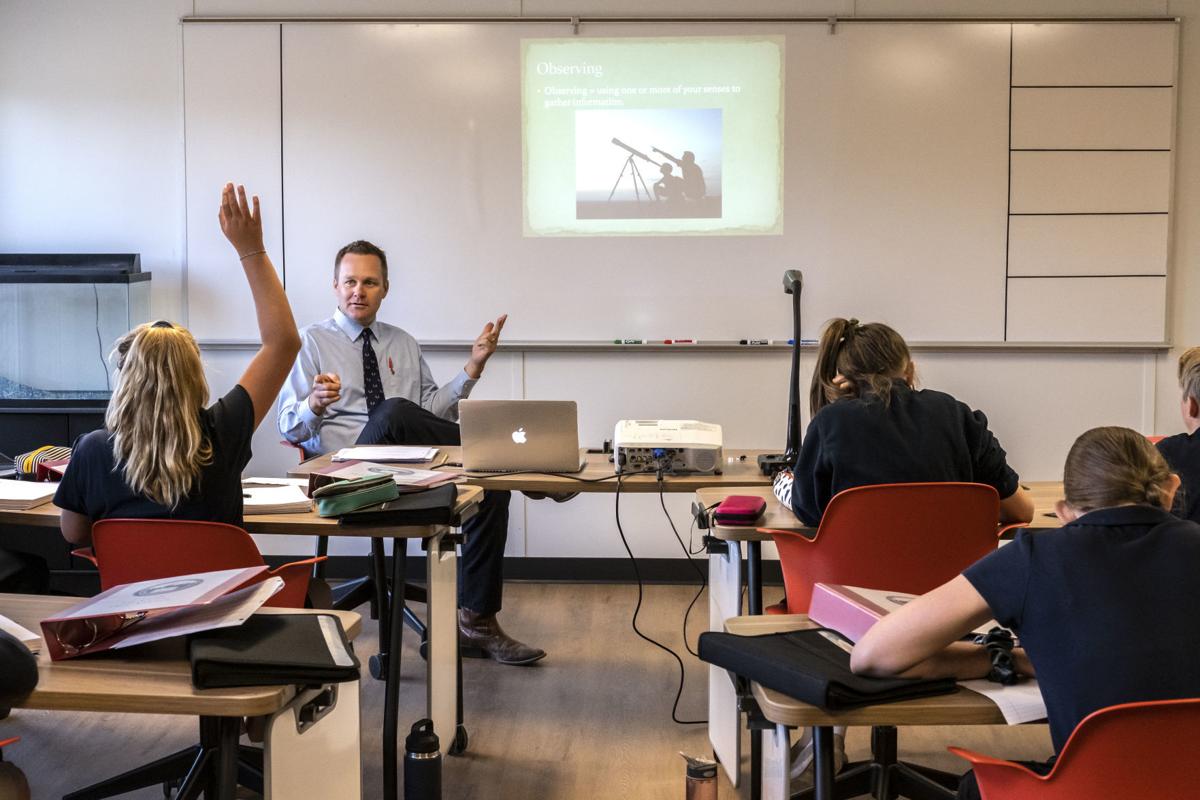 Sam Lunz presents a question to his seventh grade class on the first day of school at Jackson Hole Classical Academy. The school, which opened the doors of its new South Park campus Tuesday, has more than 100 students enrolled. 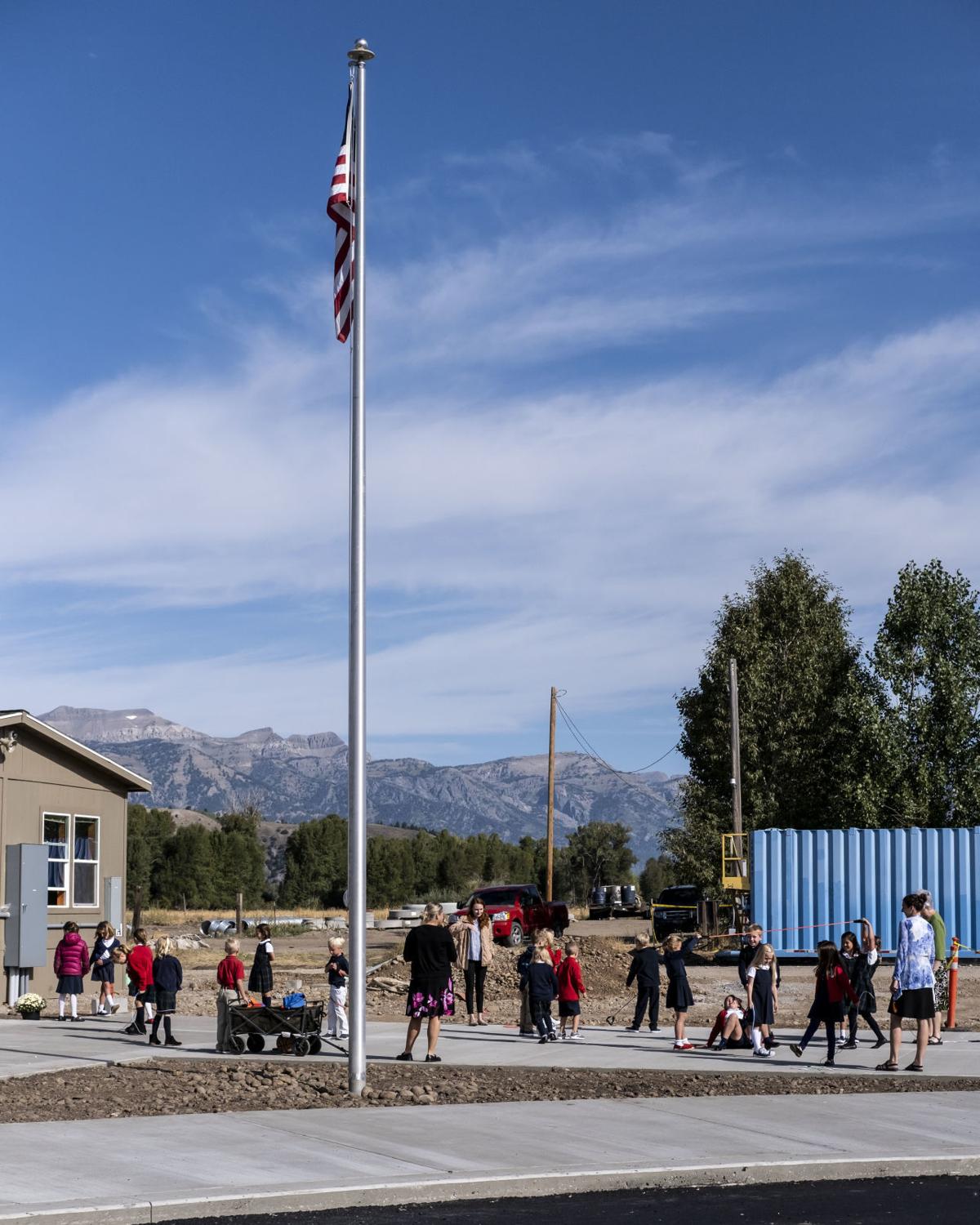 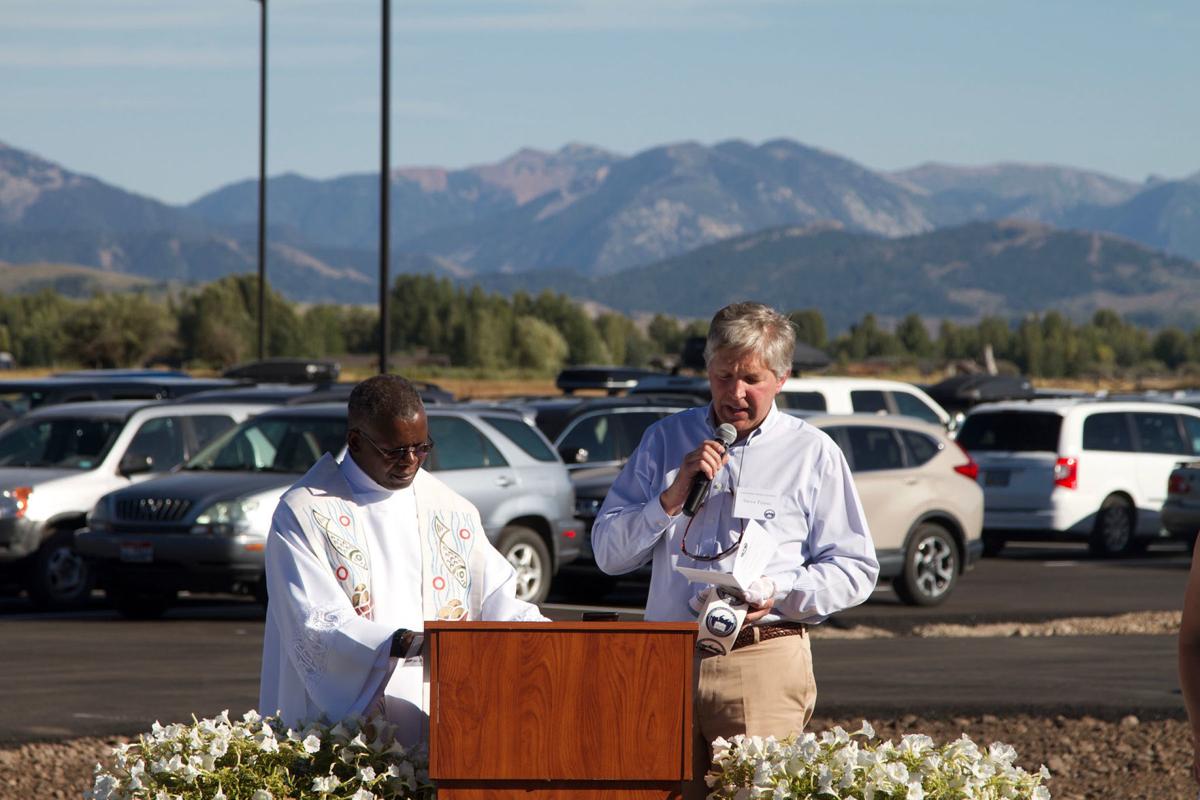 Sam Lunz presents a question to his seventh grade class on the first day of school at Jackson Hole Classical Academy. The school, which opened the doors of its new South Park campus Tuesday, has more than 100 students enrolled.

On a slab of concrete in front of the flagpole — with a stellar view of the Tetons — lower school students at the Jackson Hole Classical Academy played in their first recess at their new campus Tuesday morning, the first day of school marking a new chapter in the Academy’s history.

Eight modular buildings, sided with T1-11 panels and painted brown, sit at 2500 South Park Loop Road next to a newly asphalted parking lot. They hold the Academy’s classrooms and offices, and they became functional just in the nick of time.

“We were able to get occupancy yesterday so that we could have our dedication last night,” Headmaster Polly Friess said.

Friess called the Rev. Lucas Kazimiro Simango’s blessing at the school’s Monday dedication “beautiful” and said she and other school administrators recounted the tortuous process that led to the school’s new siting on South Park Loop Road. With sewer hookups to the town of Jackson’s system completed just days before the opening, the school was able to open its doors to its biggest class of students ever.

With 104 children attending, the school cracked the 100 mark for the first time, Friess said, passing last year’s opening number of 94 students. Accommodating that growth is why the Academy pursued a new location, and even though the new place isn’t quite done, administrators are happy to be starting the school year in what they see as a forever home.

Though the modular buildings will not house the growing school forever, the school has no set timeline for building the permanent campus. Friess said she and the other administrators want only to complete the campus for this year’s students before turning their attention to more construction. While students opened their textbooks and took their first notes of the year, table saws whirred and construction workers flattened ground with skidsteers to make way for athletic fields and an enclosed prefabricated gym that the school hopes to have in place before winter.

“Our 100-day punch list is pretty big,” Friess said, “because we barely made it in here.”

Though construction hummed along outside the classrooms, inside the school felt like a normal first day. Teachers without students prepared snacks, brand-new keyboards lined the music room and educators reviewed expectations with their new crop of kids.

The students began their annual journey toward a classical education, which differs from traditional public school offerings.

Students take classes like math, literature, history and music, but Christian theology and ancient history and philosophy are imbued into the curriculum.

“The idea within classical education is that we are looking at what is the definition of a human being,” said Dr. Kenneth Calvert, who runs a classical school at Hillsdale College in Michigan.

That search for universal definition was on full display in Manjola Koci’s classroom Tuesday. Koci asked her new students to describe what linked them.

“We’re all Christians,” one said.

“We’re all Americans,” another piped up.

Though Koci celebrated the two answers, they weren’t quite the ones she wanted.

“We’re all at this school,” a third said.

“Yes,” she exclaimed. “We all have a desire to learn.”

Having a place for students to pursue their education didn’t come easy for the Academy. In July 2017 administrators started the move by asking Teton County officials to use a land development tool in which they would conserve land elsewhere to build a school in South Park.

They asked for several amendments to county land-use regulations to build larger buildings, including a 30,000-square-foot gym, and to change the hours the school could be open. The Teton County Board of County Commissioners approved some of the changes but nixed others, and a neighbor challenge to their environmental review stalled the planning process for nearly three months.

Amid the arduous back-and-forth, Friess and her husband, Steve, sought legislative help. Wyoming lawmakers passed a bill during their 2019 session that exempted private schools from county zoning laws and forced them to “substantially conform” to state standards for public schools.

However, under the law, which Gov. Mark Gordon refused to sign but allowed to go into effect, private schools do not need to obtain public studies or legislative approval like public schools do.

The move rankled neighbors in South Park and sparked heated debate among town and county elected officials, who opposed the move because they saw it as circumventing local control.

The bill’s passage ultimately paved the way for the school’s opening at its new location.

Friess said some of the residents in South Park have approached school administrators to clear the air, and she insisted that the Academy does not intend to be hostile to its new neighbors.

Sept. 2017: The Teton County Planning Department proposes a land development regulation amendment to clarify whether that development tool can be utilized on noncontiguous parcels, or whether conserved acres can only grant bonus density when parcels are connected.

Nov. 2017: Teton County Commissioners approve a new regulation clarifying that the development tool can indeed be used on noncontiguous parcels, allowing for permanently conserved acres in one area of the county to be utilized to access bonus square footage elsewhere in the county.

Sept. 2018: Teton County planners issue recommendations to deny the Academy's proposed new regulations regarding hours of operation and building size, saying the proposals don't adhere to comprehensive plan goals of creating predictability for what neighbors can expect in certain areas of the county.

Oct. 2, 2018: South Park neighbors file an appeal of an environmental study conducted by the Classical Academy to assess natural resources and impacts of development at the proposed school site. The appeal places an automatic freeze on the Academy's plan to build a new school.

Dec. 18, 2018: Following a daylong meeting and hours of public comments, Teton County commissioners approve the Academy's proposal to allow schools in rural zones to operate starting at 7 a.m. instead of 9 a.m.

Dec. 20, 2018: County commissioners vote to dismiss South Park neighbors' appeal of the Academy's environmental study, lifting the freeze on the effort to build a new school.

Jan. 10, 2019: The Classical Academy hosts a legislative dinner in Cheyenne that features performances from students and encourages support for private schools.

Jan. 15, 2019: Teton County commissioners vote to send a letter to Wyoming Legislators opposing Senate File 49 on the grounds that it seeks to preempt local zoning control.

Aug. 7, 2019: Jackson Town Council approves temporary agreement to allow the Academy to hook into its water and sewer system.