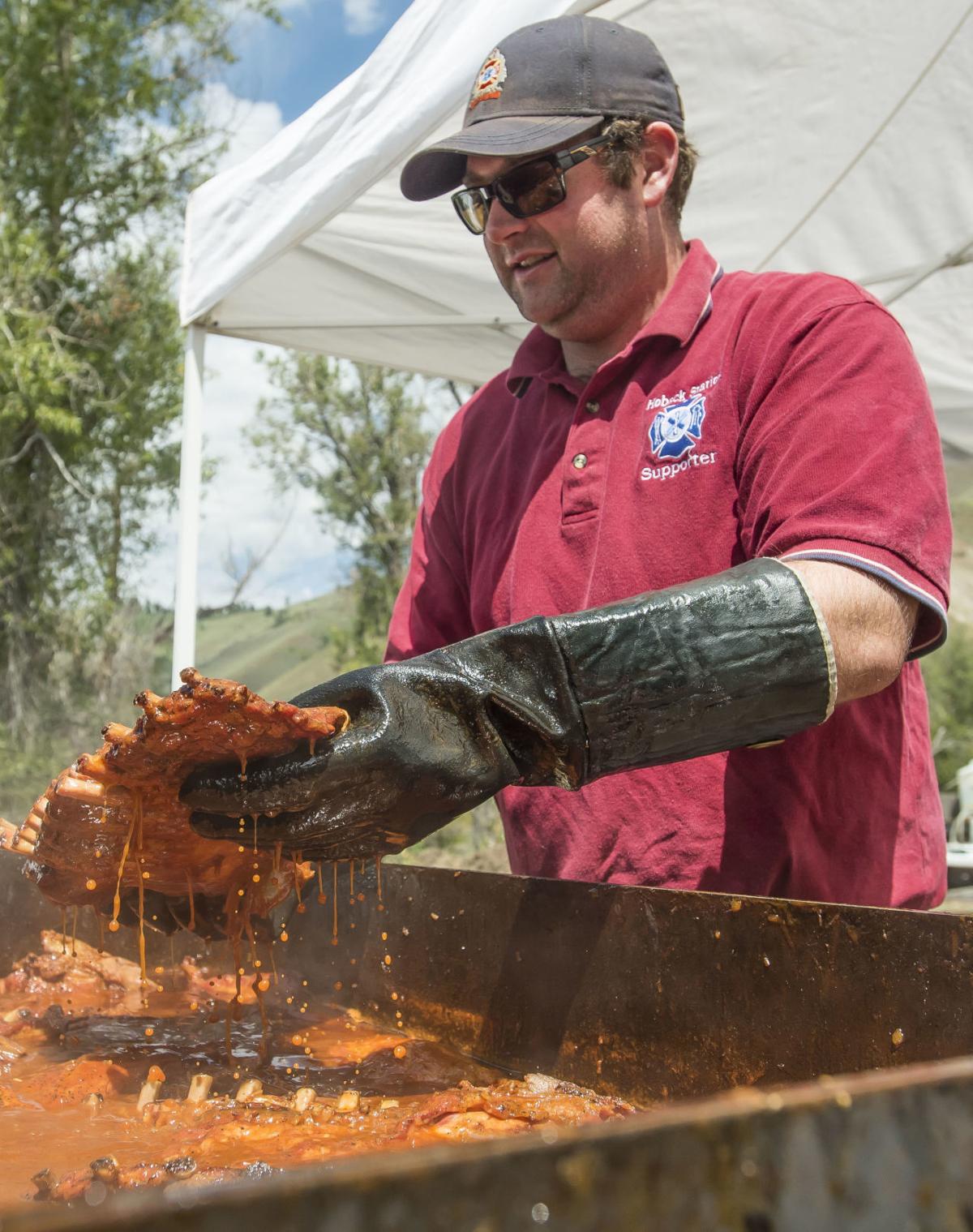 Jack Hutcheson grabs a freshly smoked rack of ribs dripping with sauce. He and his fellow firefighters worked in shifts beginning at 3 p.m. Friday to prepare five batches of ribs for the picnic. 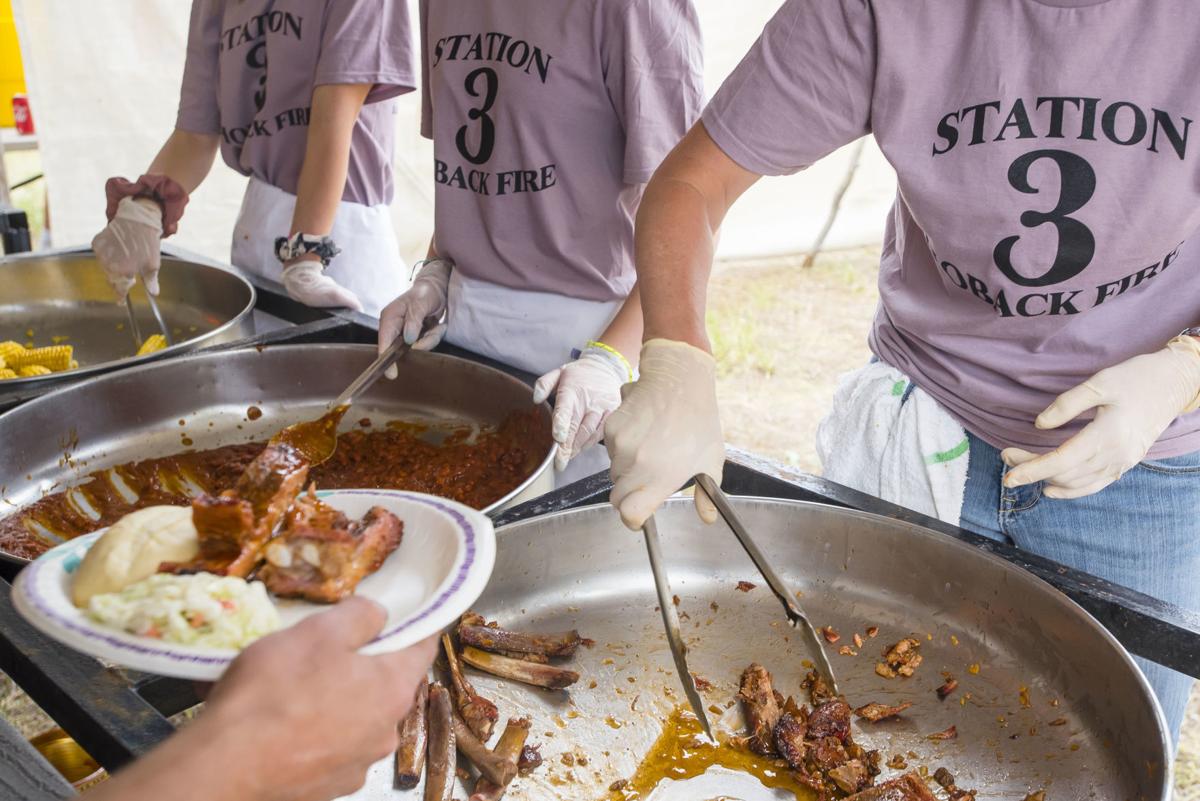 Jack Hutcheson grabs a freshly smoked rack of ribs dripping with sauce. He and his fellow firefighters worked in shifts beginning at 3 p.m. Friday to prepare five batches of ribs for the picnic.

The Hoback Volunteer Firefighters approached their 43rd annual fundraiser picnic the way they would a fire.

In both situations, said Battalion Chief Fire Marshal Kathy Clay, their success comes from their ability to collaborate. Just the week before they had seen that strategy at work when they responded to and contained the fire that broke out by the National Museum of Wildlife Art.

“On fire scenes we have an incident command system so that one person doesn’t end up in charge of all of us,” Clay said. “Because that never works. And that’s what incident command is about: breaking up the tasks into groups that work.”

For many at the picnic, their efficiency could be explained by the fact that they’ve been doing this for a while. It wasn’t uncommon to bump into attendees who’d been coming to the picnic well into the double digits of years since it first started in 1976.

The funds the volunteer firefighters raised will support recruiting, training, retention and equipment to allow them to continue to provide services to the Teton County community.

Clay was in charge of ordering food for the picnic, a process that began two months ago when she called the Hoback fire station’s go-to rib supplier in Utah to make sure it would have the 3,000 pounds of ribs firefighters needed.

This year, Clay said, all the food arrived without a hitch. That’s not something she takes for granted, considering how two years ago at the picnic the firefighters forgot molasses and had to clear out the shelves of local grocery stores.

The day of the picnic, with her food ordering duties complete, Clay walked around the setup at Astoria Hot Springs Park, helping other stations as needed by running to make some fresh coleslaw or transporting empty buckets from one place to another.

The Hoback station itself is composed of a relatively small group of 12 firefighters, but they are helped by dozens of other volunteers on their biggest fundraising day of the year.

The hundreds of community members of all ages who came to the picnic were there to support the fire department, of course, but also for the certified feast.

“So we have ribs,” said Station 3 Captain Mike Trumbower, who has been coming to the picnic since he moved to Hoback and became a volunteer firefighter in 1986. “Coleslaw. Corn on the cob. Rolls. The famous beans cooked by Eric Schneider. Desserts from all over the place. Beer. Water. And refreshments.”

And those “famous” beans were no joke, either.

Hoback volunteer firefighter Schneider joined the department in 2014 and has been assigned to bean station duty at the picnic every year since. The key to unlocking his dish’s optimum flavor lay in the careful preparation.

Volunteer Donnie Beale explained the process: On Thursday they smoked 40 pounds of bacon, 30 pounds of onions, 30 pounds of habaneros and one quart of garlic. On Friday they chopped all the ingredients and started setting up at Astoria. By the time Saturday rolled around, all they had to do was add the beans.

The picnic saw a small decline in attendance and in the amount of money raised compared with previous years, but Clay said it was nevertheless a successful fundraiser for Station 3.

The Hoback firefighters had some ribs left over but managed to sell them Monday night to commuters making their way past the station.

And though some volunteers worried that moving the picnic’s location — because of the construction happening down the road at their previous Astoria Hot Springs spot — would be a challenge, it proved to be a welcome change of venue.

“We were apprehensive,” Clay said. “It made everybody a little bit edgy. But this is a beautiful place. And I think it actually serves us in putting on this picnic even better.”