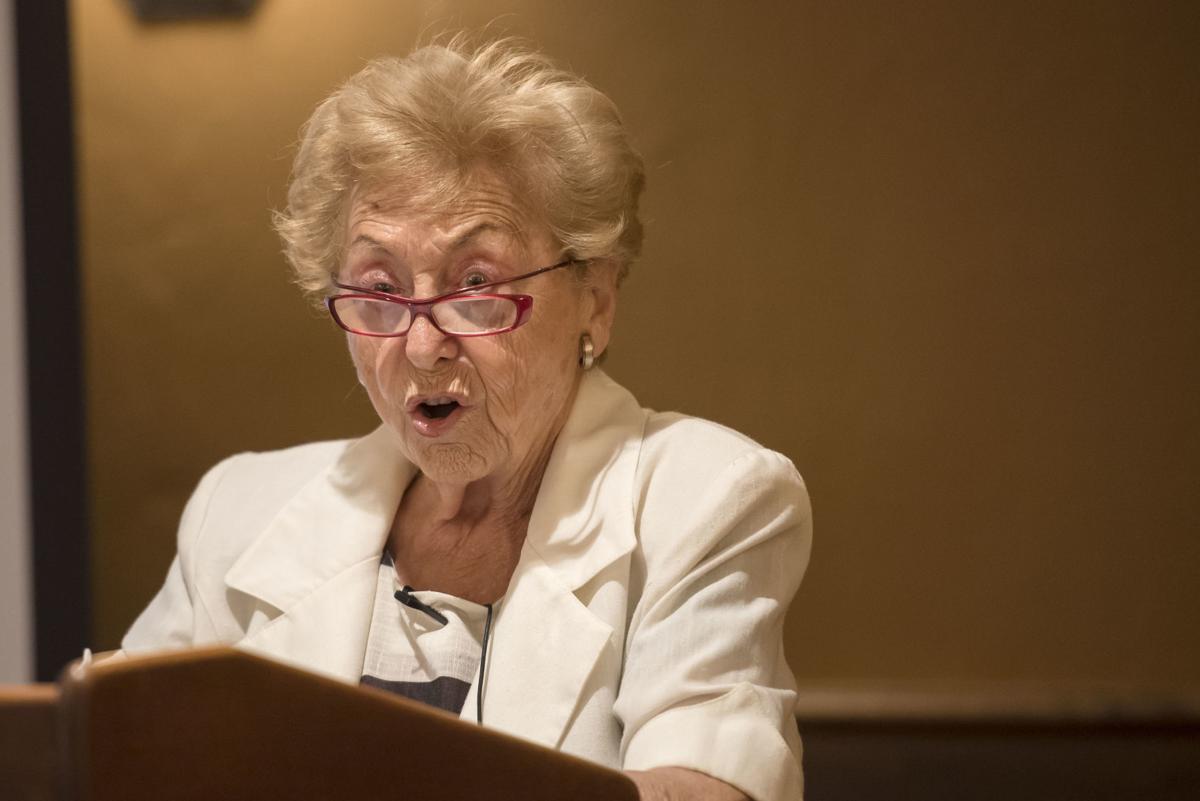 Jona Laks, a survivor of Josef Mengele’s twin “experiments” at Auchwitz, speaks about her life Thursday at The Wort Hotel. 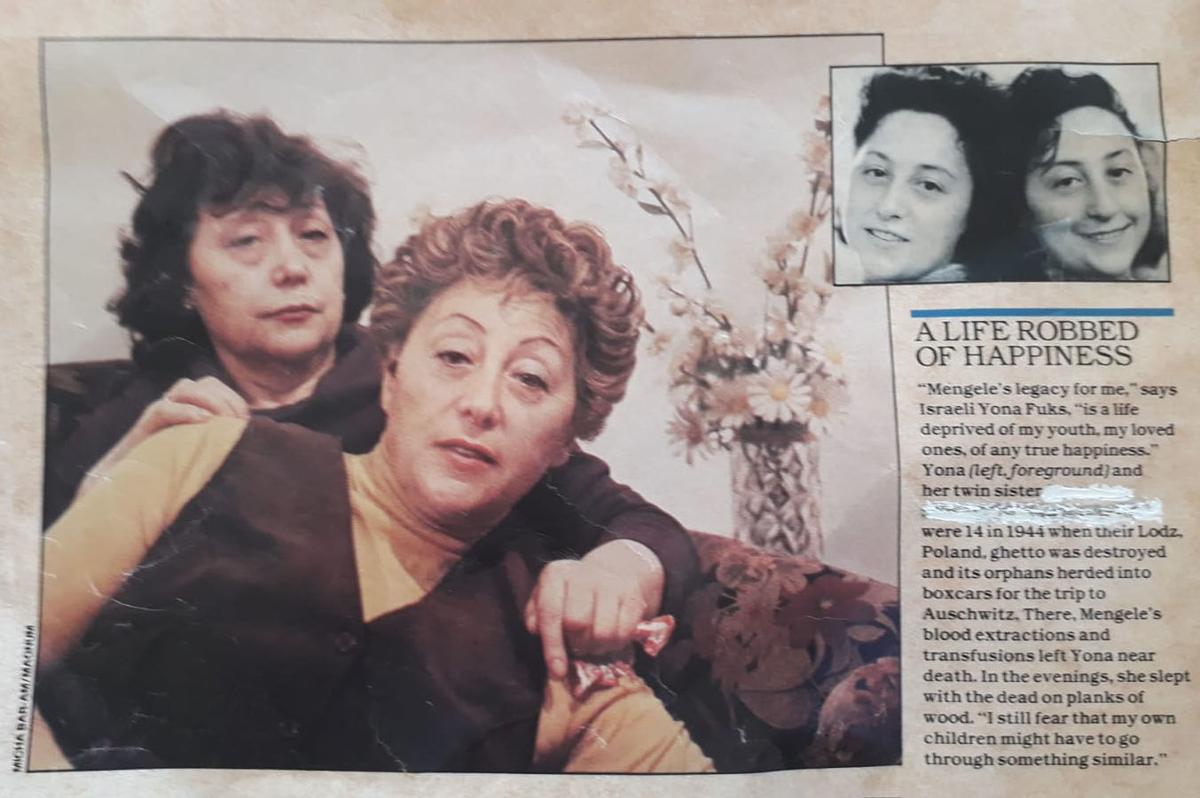 A newspaper clipping outlines what Jona Laks and her twin suffered at Auchwitz. Both twins survived and went on to marry and have children.

Jona Laks, a survivor of Josef Mengele’s twin “experiments” at Auchwitz, speaks about her life Thursday at The Wort Hotel.

A newspaper clipping outlines what Jona Laks and her twin suffered at Auchwitz. Both twins survived and went on to marry and have children.

After the Wannssee Conference in 1942, during which the Nazi government determined the “final solution,” its plan to kill all Jews in its reach, Jona Laks and her family were living in the Lodz Ghetto, a Jewish ghetto established by the Germans in Lodz, Poland.

At the time they did not know where the trains that took people from the ghetto were going.

“Lodz was hermetically sealed,” Laks told an audience that gathered at The Wort Hotel on Thursday.

Still, one day, before being called down to a daily lineup from which German soldiers would choose which residents of the ghetto would board the trains, Laks’ father shepherded her and her twin sister, Miriam, to the back of a cupboard, hiding them behind stacked bottles.

That day her family was sent to the Chelmno extermination camp in Poland.

“They would not come back,” Laks said.

She, her twin sister and their older sister, Chana, were the only survivors of their family.

More than seven decades later Laks shared her story with a crowd brought together by the Chabad Jewish Center of Wyoming.

A survivor of both the Holocaust and the so-called “experiments” performed by the Nazi doctor Josef Mengele in the Auschwitz concentration camp, Laks touched on her family’s life in the ghetto, her experience in the concentration camp and her quest afterward to unite other Mengele twins.

In an interview before her talk, Laks was clear about her reason for speaking on Thursday.

“When I come across a [report] about the Holocaust and I read the details, sometimes I’m shocked because the details are not accurate,” she said. Reading a secondhand account does not unveil the “deep information I can get from a survivor themselves. It’s so crucial for the subject to be brought up.”

Laks said that in her hometown of Tel Aviv, Israel, age-related complications cause the death of nearly three dozen Holocaust survivors a day.

“The survivors are now passing away,” she said. “I’m here because it’s really necessary, and it’s the last time — high time — to speak about the Holocaust: to see, to take care that it’s passed on to the next generation.”

In 1944, after being denied an education or a social life in the ghetto and enduring signs that read “Jews and dogs are not allowed to enter” on buildings in her hometown, Laks and her sisters were deported to Auschwitz.

They traveled in cattle cars. They could not sit, nor could they use a bathroom. They did not know where they were headed. It wasn’t until they heard the “barking of many, many dogs, the heavy shoes of the SS officers and the loud shouting,” that they had an idea of where they were, Laks said.

Mengele arrived soon after they were forced off the train. Laks remembers him carrying a stick in one hand and having two dogs at his side. With his right hand he sent passengers to hard labor. His left sent them to the crematorium.

Despite Chana’s best efforts to make Laks look healthy and strong — she pinched her cheeks to give her color, and gave her wooden shoes to give her height — Mengele sent Laks left.

“I was running, and from a distance, not far, I could already see the flames coming out of the chimney and smell the burnt flesh,” Laks said to the audience. “It was only then that I understood where I was going.”

Her older sister pleaded with Mengele, who, after discovering Laks was a twin, brought her back. The three siblings were reunited, briefly, before Chana was sent to another camp for hard labor.

Laks and Miriam were kept at Auschwitz, where they were subjected to Mengele’s cruelty.

In her talk, Laks kept details about her experience in Auschwitz and the Mengele “experiments” to a minimum. Details about injections that left some blind, surgeries that rendered others paralyzed and other acts of torture that killed countless others have been publicized.

Laks said it was “difficult” to recall what she experienced in Auschwitz. “It’s difficult to describe the awful, unhuman, impossible, incredible conditions we lived under.”

She and her twin were taken three times a week to undergo Mengele’s torture.

Laks remembered a family of dwarfs from Hungary that was subjected to similar procedures and wasn’t able to walk up the steps. She offered to help, while the German soldiers standing guard watched, smiling and laughing.

“It was a terrible sight,” she said.

Laks and the other twins, as well as the other prisoners in Auschwitz, were not permitted to speak. They were not allowed to cry. If the younger twins started crying, older children like Laks and her sister would try to quiet them. If the younger children didn’t quiet down, they would be beaten.

After arriving in Israel years after the war she founded the Organization of the Mengele Twins, which is dedicated to documenting the voices of those who suffered Mengele’s torture.

“We also wanted to know who was left,” she said in the interview. “Who was still alive and who was not alive.”

After rounding up a number of twins to share their stories in a 2015 BBC documentary, a man in Russia contacted the BBC, angry that his photo had been shared without his permission.

What he didn’t realize was that the photo was actually of his brother, who lived in Israel.

Laks made it her mission to connect them and, finally, after contacting the Israeli twin’s “favorite son,” was able to have them speak over the phone.

That, in part, was the reason Laks started the organization.

“I felt that we need to get together and get to know each other because we all passed [through] the same atrocities,” she said. “We could talk about something that we never did.”

After the war ended, Laks and her twin were eventually reunited with their older sibling, who had thought, before finding her sisters in Lodz, that she was the last remaining member of their family.

Laks’ twin, Miriam, went on to marry and have two sons, both of who became professors. She died two weeks before Laks’ presentation at The Wort.

Their older sister, Chana, died about 10 years ago.

Laks also married and had three children, one of whom died young.

“I succeeded to establish a family in spite of all this,” she said toward the end of her talk.

She also said that although she has lived a full life after the Holocaust, she has not forgiven the people who perpetrated the crimes.

“Forgiveness erases memory,” she said. “It is our task [as survivors] to try to pass it over to the next generation, and it should not be forgotten.”

Laks had a message for those who deny the Holocaust happened: “Despite all that was practiced, and despite the intention of the German government to wipe out the Jewish population, they did not succeed,” she said. “The Jewish country came about and hopefully will exist until the end of time.”