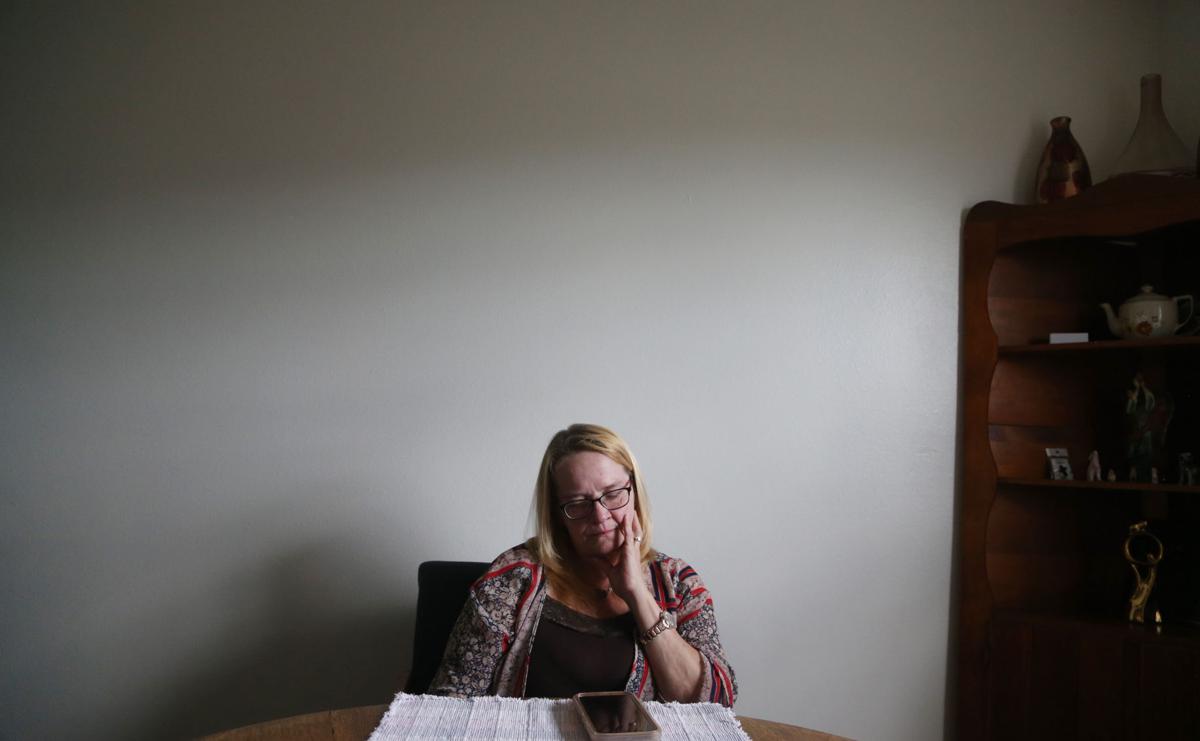 Patty Edwards reflects on memories of her husband, Victor, in her home in Casper. On the table is her cellphone, containing many photos of her late husband. 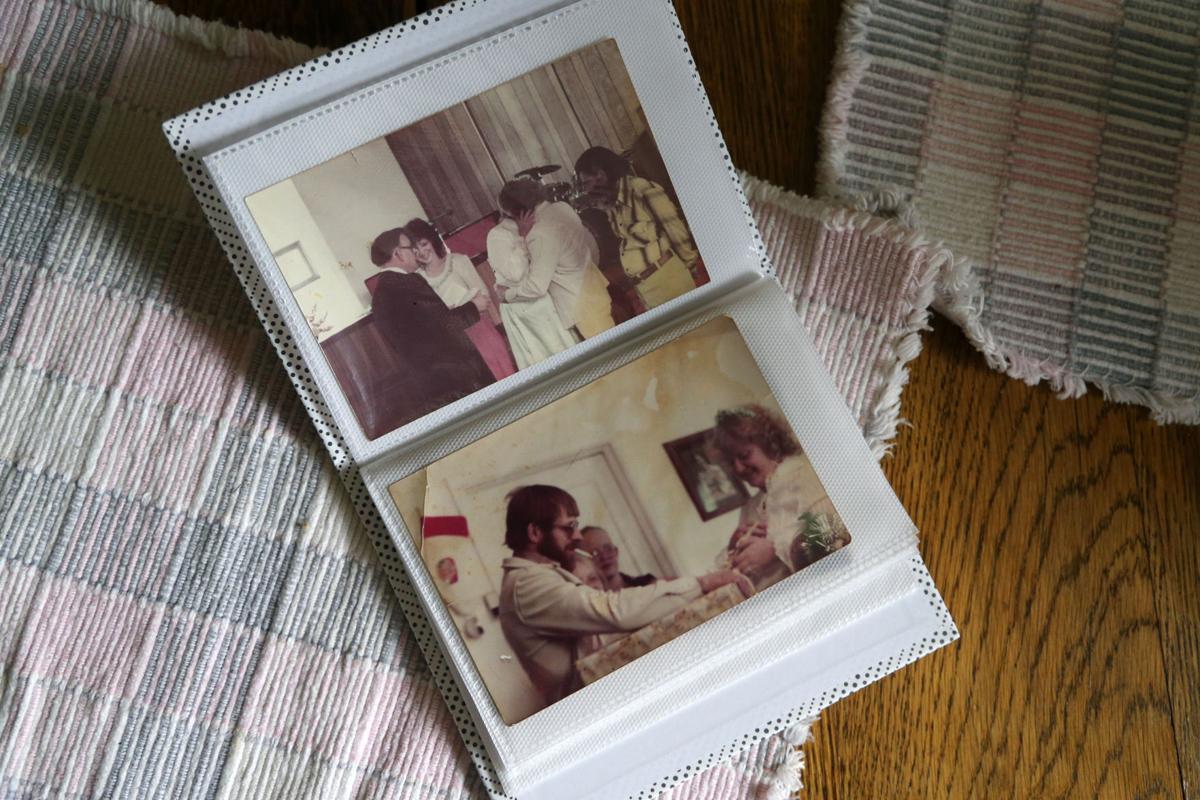 A photo album belonging to Patty Edwards holds pictures of the first wedding ceremony with her husband, Victor. 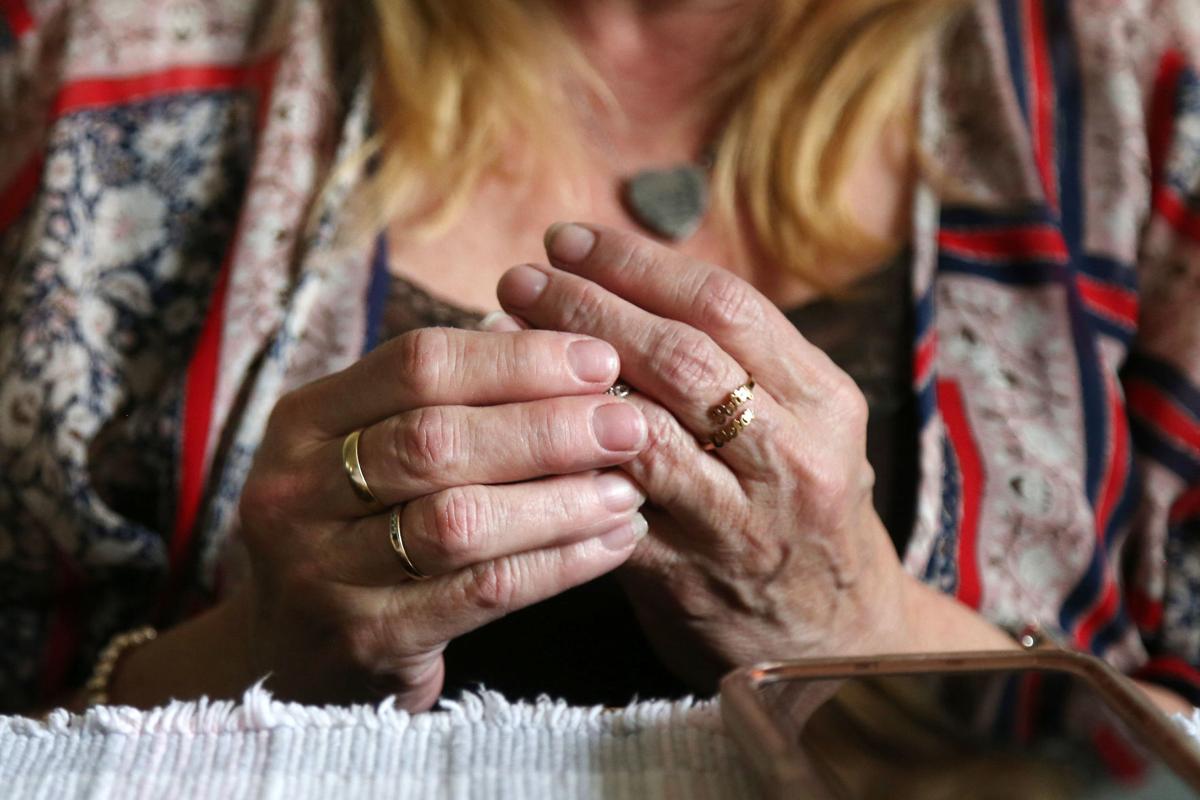 Patty Edwards places her wedding band back on her left ring finger at her home in Casper Wednesday, May 26. On her right middle finger is Victor’s wedding ring.

Patty Edwards reflects on memories of her husband, Victor, in her home in Casper. On the table is her cellphone, containing many photos of her late husband.

A photo album belonging to Patty Edwards holds pictures of the first wedding ceremony with her husband, Victor.

Patty Edwards places her wedding band back on her left ring finger at her home in Casper Wednesday, May 26. On her right middle finger is Victor’s wedding ring.

CASPER — Patty Edwards had spent her morning like most days that month: thinking longingly about her ex-husband. But this January day, something was different.

The movie she was watching, some made-for-TV romance in which a long-separated husband and wife reconnect after years apart, felt like a sign.

In an instant she knew what she had to do.

She got up and dressed. Her roommate approached and asked where she was headed.

“I’m going to get married,” Patty told her.

The roommate asked: “Who are you marrying?”

Victor answered Patty’s call from his hospital bed at Wyoming Medical Center. She told him exactly what she’d explained to her roommate moments before.

“Who are you marrying?” Victor asked.

Through tears, he replied, “I think that’s a good idea.”

Patty drove straight to the Natrona County courthouse. She asked for a marriage license. Someone asked where the other party was.

A clerk gave Patty a piece of paper and explained that someone else would need to fill out Victor’s personal information and sign for him, acknowledging that he was willing to be part of the ceremony.

Her daughter Amber, who was with her, completed the paperwork. Patty hoped she’d officiate the ceremony.

On the way she called her twin sons, Ryan and Roy, and asked them to serve as witnesses. They called Pat, Victor’s son from his first marriage, and their adopted son Zachary.

They drove to a pawn shop to pick up wedding rings on the way.

The fantasy was interrupted, however, when Patty arrived at the hospital.

One of Victor’s nurses called Amanda Messmer, a patient advocate at Wyoming Medical Center. In her seven years in that role, Messmer has helped facilitate six WMC weddings. But nothing this quickly.

“[Patty] wanted to do it within the next couple of hours. She’s like, ‘We’re doing this’ and so was Vic,” Messmer recalled.

Messmer sat them down and said she would help, but it would have to wait until the next day.

People described Victor (he also goes by ‘Vic’) as an incessant practical joker. Sometimes crass. More than generous. A family man sometimes quick to anger, but just as quick to crack a joke.

He walked everywhere, Patty said. Once he broke his leg in a freak accident, but he continued walking to work on crutches — committed to providing for his young family.

Another time, Amber recalls, he bought car parts for a family who couldn’t afford them and then helped make the repairs.

Victor was also a prime candidate for developing a severe illness from COVID-19. He’d been a lifelong smoker and had already dealt with chronic obstructive pulmonary disease. And his career breathing debris as a tire mechanic left his lungs fragile.

“When Victor was diagnosed with COVID, I already knew that he had really bad COPD, and I knew the chances of him walking away from that were not good,” Patty said.

Victor was reluctant to go to the hospital and worried they wouldn’t let him leave, but when Patty saw him for the first time after his diagnosis it was clear he needed medical attention.

She tried to comfort his fears and promised he wouldn’t have to stay if he really didn’t want to. He stopped half a dozen times to catch his breath on his way from the couch to Patty’s car.

Victor remained at the hospital until just before Christmas, when he was no longer considered contagious and was allowed to return home.

But the virus had already taken its toll. He returned to the hospital a few days later.

Victor had arrived in Wyoming via Minnesota, a nearly 30-year-old divorced father of a young son. Her cousin’s husband’s brother, Victor showed up at Patty’s house one day to help fix the transmission in her car. It was 1980. Patty was 17.

She found this new man “intriguing” and “a little kooky.” Over the next few days, they were inseparable.

“There used to be a little shop out on CY called Greta’s, and he went there and bought me a ring and asked me to marry him in the parking lot about three days after we met,” she said.

They were married shortly after Patty’s 19th birthday. They had three children together and lived happily in Casper for 14 years.

“I’m not going to sit here and say that our marriage wasn’t a good one, because it was, but like I told you before, I was 17, he was almost 30. He was ready to settle down, and I guess I wasn’t,” Patty said.

After more than a decade, they split up. But they couldn’t stay apart.

They each left Casper at different points, sometimes together and sometimes separately. When Patty at one point adopted her new partner’s son, Victor drove to Nebraska to help raise him.

They’d both thought about getting remarried. Victor had asked Patty a handful of times over the years, and Patty had asked Victor once years ago, too. But the timing was never right.

“They were best friends,” Amber said. “You always have that really good friend that knows you and knows everything about you and you go to for everything. And that was them. And even when they would be in opposite relationships, they still had that.”

Patty woke on her wedding day feeling uneasy. She hadn’t been able to reach Victor the night before. Her fears proved warranted — Victor’s team at the hospital had spent that morning deciding if the wedding could still happen.

“Friday morning, when I came in his oxygen demand had gone up overnight and he just, he just didn’t look well,” said Meagan Reisinger, one of Vic’s nurses.

She called the nurse manager and told her Victor would not be able to go to the chapel. His condition was too unstable.

Amanda called Patty from Victor’s phone and told her he had taken a turn for the worse.

“Of course, she fell apart a little,” Messmer said, “And I was like, ‘No, no, we can still do it. We just have to do it in the room and you have to change things up a little.’”

Her daughter would not be allowed to officiate, and her sons would not be able to serve as witnesses. But by that point, Patty didn’t care. She dressed and drove to the hospital.

The plan at first was to still wait until 2 p.m. — the time they’d all agreed on the day before. But Patty was insistent. She had a gut feeling that if they didn’t do the ceremony right then, they’d miss their chance entirely. It was noon. Amanda called the chaplain.

Dave Mondle had been doing rounds with other patients. When Amanda called, he turned around immediately, grabbed his minister’s manual and headed for Victor’s room.

The ceremony lasted 10 minutes. Patty sat in the bed with Victor, with witnesses (Messmer and the hospital’s other chaplain) on either side. Reisinger, the nurse, used one phone to record the ceremony and another to FaceTime Patty and Victor’s children.

The couple said their vows. Instead of a kiss, Mondle told them to wink at each other. Then it was just the newlyweds, alone. Patty showed him her ring.

She played him their song from her phone — Bette Midler’s “Wind Beneath My Wings.”

They called their children. She told Victor about the lease she had just signed the day before for a house they could grow old in together. Eventually, Patty decided she should let him rest. Before she left, she lifted his oxygen mask and gave him a kiss.

Before she could reach the front doors of the hospital, a rapid response alarm rang out over the intercom. It was for Victor’s room. Patty raced upstairs.

Messmer heard the call, too, and rushed to the room just in time to intercept Patty. They sat together in the waiting area until Victor’s doctor appeared.

“Look, I’m going to be straight to you,” the doctor said. “He has zero healthy lung tissue left. He’s not going to come off this ventilator.”

She needed to decide if her husband would stay on life support.

“I believed if I could just give him a reason to live, he would,” Patty said later, through sobs. “I should have married him again years ago, I just didn’t.”

Her remorse, though, quickly turned to gratitude.

“Never in this lifetime will you ever find another man as good, as funny, as dedicated to whatever it was that he was doing,” Patty said, now months later. “I don’t say that for any other reason than it’s true.”

Victor’s funeral was well-attended. Nearly 200 people came to the WORD Church to honor his memory.

Patty thinks she might travel. Victor had always wanted a mobile home, so Patty is looking for one.

She keeps her husband’s memory around her neck — a heart-shaped charm with Victor’s face etched in it. She hopes people don’t read her tale as a tragedy, but rather as a love story.

“The reason I’m doing this is because in a thousand years from now, somebody could go into the archives and know what his last day was about,” Patty told a journalist. “And I think that’s totally awesome.”

“I believed if I could just give him a reason to live, he would.” — Patty Edwards bride and widow in a day