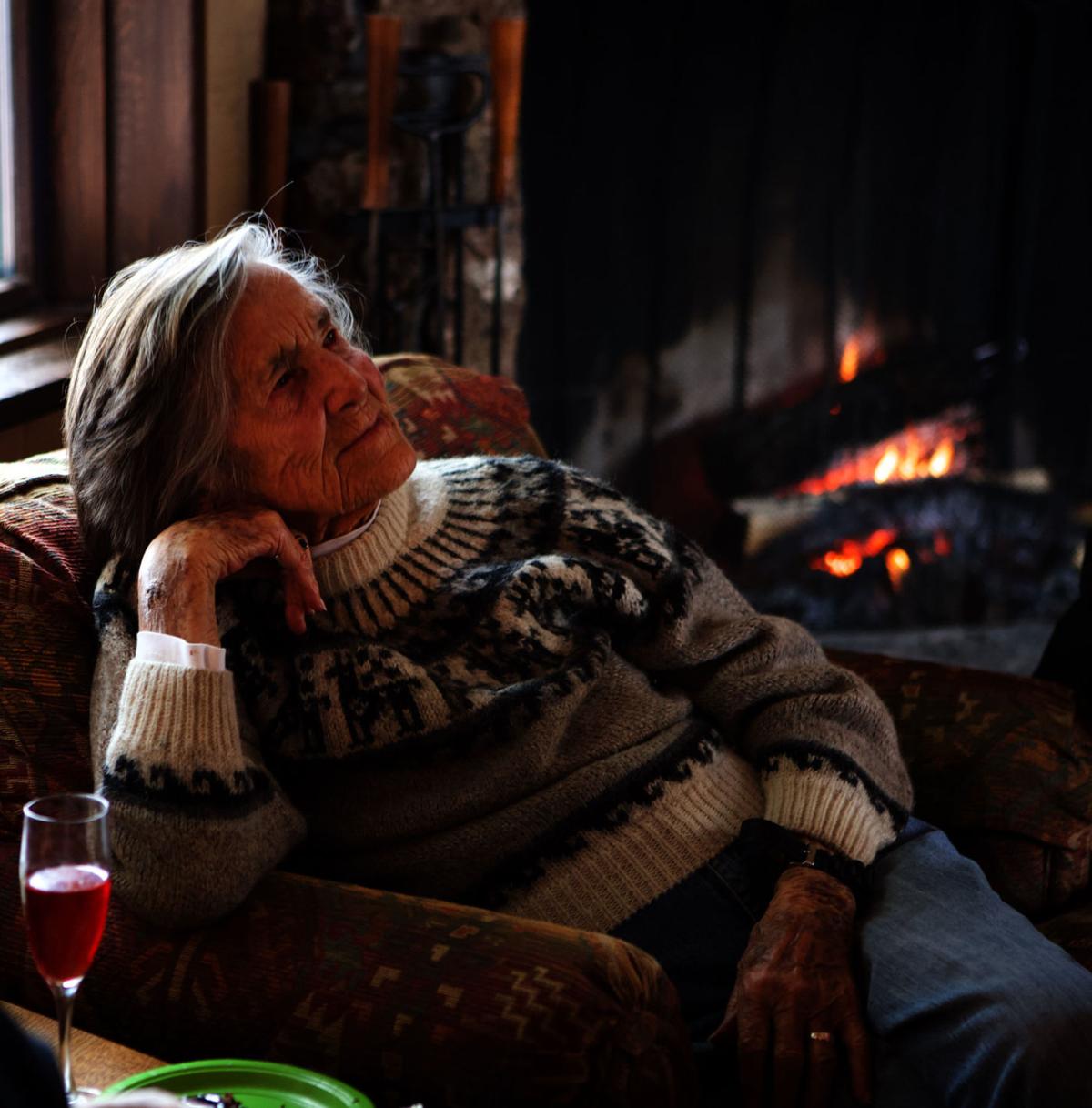 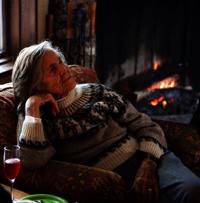 Inger Koedt lived her final years in her East Jackson cabin, a gathering place for friends. 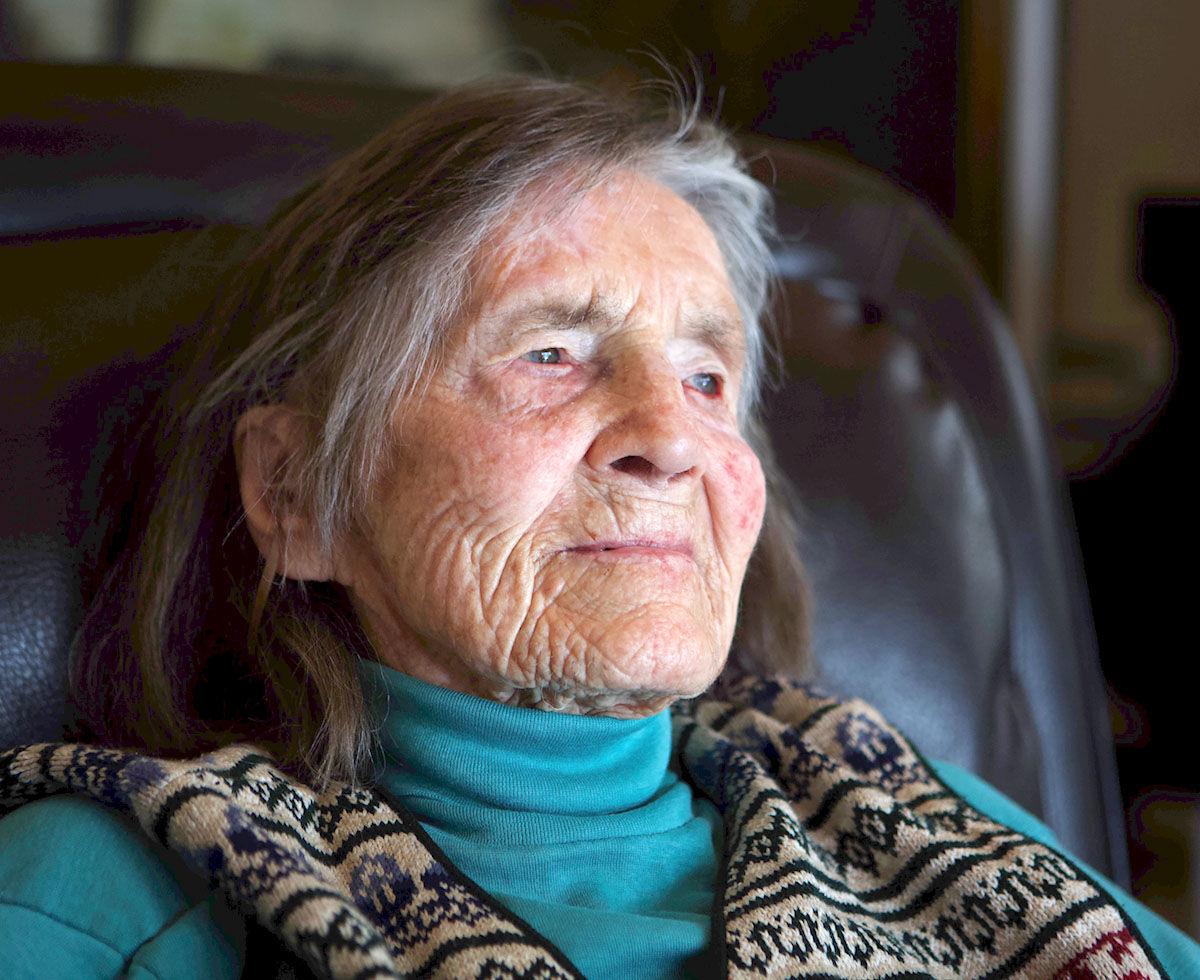 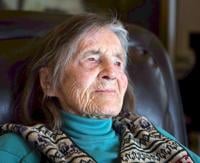 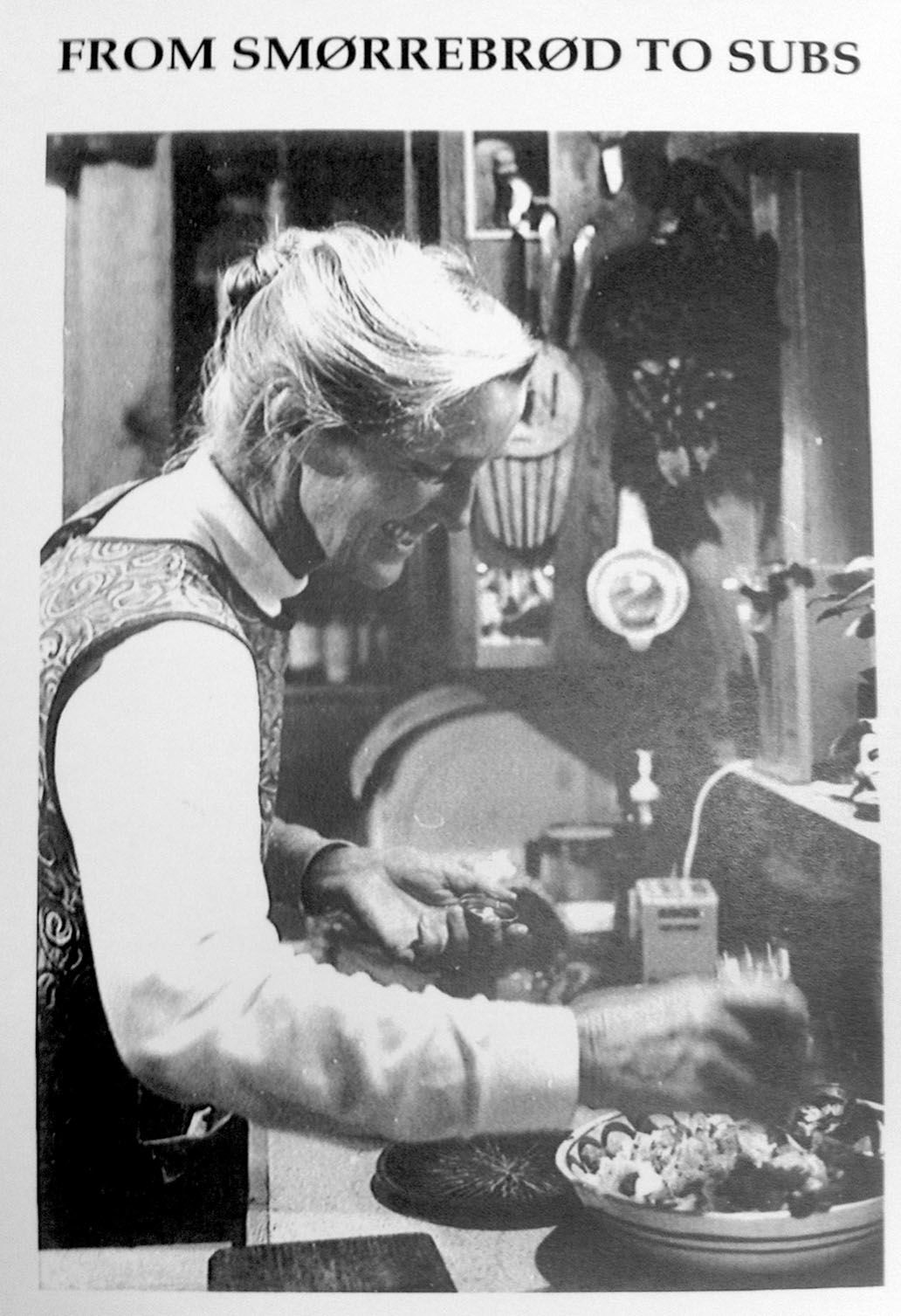 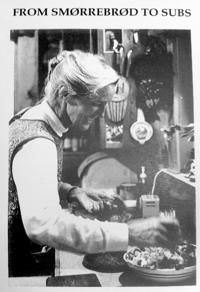 Koedt published a cookbook of recipes inspired by the mountains, “From Smorrebrod to Subs.” The book can still be found around town and is a favorite with local cooks.

Inger Koedt, who has died at age 106, lived here 65 years, was known by generations of residents, skied and climbed, advocated environmental and social issues, recommended that people “eat dark chocolate and drink red wine” for health, eventually became famous just for making it to more birthdays than anyone else around.

But long before she came to Jackson, Koedt lived five years under Nazi occupation during World War II and hid Jews in her house as they were smuggled from Denmark to Sweden to save them from the camps.

She once sat in her kitchen with some of those Nazis and one of those Jews, lying to the Germans that the man was just an innocent visitor.

Koedt died in her sleep at her home in East Jackson this past Saturday, Aug. 14, though over the years it seemed at times that she might live forever. Koedt climbed the Grand Teton when she turned 66 and went camping in the Winds when she was in her 80s. She went on a Snake River raft trip to note her first century of life. She welcomed friends last year to her 105th birthday. Though there’s no official record, Koedt is believed to have been the oldest person in Teton County.

She was active past her mid-90s and brought a big attitude to life.

“We’d go cross-country skiing and I couldn’t keep up with her until she was 90, and she was 26 years older than me,” said friend Ann Smith. “She was asked on her 85th birthday what she wanted to do special, and she said, ‘Well, I want to climb Mount Moran but [son] Peter won’t let me because he said I’d fall off — I said, ‘So what? I’m 85.’ ”

Charlie Craighead, another Koedt friend for decades, noted another side, and said “people relied on Inger to ground them and point them in the right direction.”

In her time in Jackson Hole, Koedt helped launch and was the cook at the Mangy Moose Spaghetti Emporium, which survives today as the Mangy Moose Steakhouse and Saloon, one of the Hole’s landmark gathering places. She befriended and worked with Mardy Murie, Jackson’s most famous environmentalist and campaigner for the Arctic Wildlilfe Refuge, often serving as her advisor. She and friends founded the Brown Bag Lunch Group, which pushed women’s and kids social programs. With help from her daughter Anne and friend Reade Dornan, she published a book of her recipes when she was 100.

But with all she did in Jackson, it was the story of her wartime resistance work in Denmark that was most impressive and hard to believe — especially when told by a pleasant gray-haired lady who had something baking in the oven.

She was born Inger Kongsted on Jan. 15, 1915, and was married young to Bobs Peschcke-Koedt, California born but Danish raised. The couple lived in a suburb of Copenhagen when the Germans invaded on April 9, 1940, conquering Denmark in a morning.

The Koedts had two daughters, Bonnie in 1937 and Anne in 1939, and added son Peter in 1944. Despite that, they decided it was their moral duty to help Jews escape the Nazis. On one occasion some Germans arrived unannounced to poke around. In what seems like a scene from a black-and-white movie, the family and the invaders and one of the Jews they were sheltering found themselves sitting at the kitchen table.

Daughter Bonnie, maybe 6, knowing they had a secret, asked, “Are these the Nazis we’re supposed to lie to, Mommy?”

“It all depended on the children telling the right lies to the Nazis,” Koedt told an interviewer last year.

Luckily, the comment wasn’t heard or the Germans didn’t have the Danish to understand. Inger Koedt explained to the Germans that the visitor was a relative in town from the country.

Later, she sometimes downplayed the smuggling work: “Everyone was doing it, so you didn’t worry you would get turned in.”

Early on the Germans were lenient, seeking cooperation to get food and other things they needed. That changed in October 1943, when Hitler ordered a roundup of Denmark’s Jews. But word leaked, and a spontaneous effort began to warn Jews and get them to safety.

Jews who came to the Koedt household and others were taken at night by boat to Sweden, within sight over about 3 miles of water, close enough that “you could see the carlights in Sweden,” said Koedt’s granddaughter Lise Kreps. Inger later estimated that about 30 families staged their escape from her house, most during the first weeks of the German roundup, but continuing until peace came in May 1945.

About 7,200 Danish Jews were rescued from a total of 7,800, taken over the water in rowboats, sailboats, small fishing vessels. They escaped “partly because they were tipped off, and partly because they had somewhere to go,” Lise Kreps said. “And because there were brave people willing to do it.”

“Inger was always quick to defend people who were under any sort of authoritarian threat.” —Charlie Craighead, friend of Inger Koed

It wasn’t always as relaxed as Inger implied in that “everyone was doing it” account. Inger’s daughter Anne recalled in an interview that “at one point my dad had to go underground during the war, and my mom had to flee in the winter to our little summerhouse with us kids because of fear of being taken by the Nazis.”

“She went to the summerhouse with a 4-year-old and a 6-year-old, and she was pregnant,” Lise Kreps said.

Inger said in a 2020 interview that the typical response of Danes asked why they took the risk was “what else could we do?”

Lise Kreps heard about one family, parents and kids and grandparents, that passed through the house.

The Koedts also hid weapons and made photos for fake identification papers.

Inger was once arrested, though not for courageous resistance. Passing a German soldier and his Danish girlfriend, she made a show of holding her nose and was seized. Sympathetic Danish cops told the Germans “we’ll take care of this criminal” and after warning her sent her home, Lise Kreps said.

The family immigrated to the U.S. in 1951, and, in 1956, Bobs Peschecke-Koedt — by then Bob Koedt — was hired to help build Jackson Lake Lodge, in Grand Teton National Park. He also designed houses in Jackson Hole and the Mangy Moose building.

Inger Koedt was active in sports and the community. She worked on behalf of a foreign student exchange program and was on the boards of Teton Science Schools and the Jackson Hole Community Housing Trust. During the 2008 campaign she went out with a sign that read “Great-grandmas for Obama.” Koedt spoke to students about the war and helped bring an Anne Frank exhibit to town.

She was an advisor in creation of the Murie Center. Nancy Shea, who started the center, and is now head of the Jackson Hole Climate Action Collective, said Koedt was an important help for Murie’s conservation work.

“Mardy was older, and I think Inger was a strong ally to Mardy ... she was a solid, solid friend, always there.”

She listened to Mozart and Chopin, enjoyed “Gone With the Wind,” favored tulips and liked sandwiches of pickled herring, boiled egg and onion on Danish toast. She cooked for friends, liked dogs.

During the more than 40 years she lived in a cabin at the Murie Ranch, now national park property, she made friends with a porcupine that developed a taste for her homemade bread and turned down store bought. Porky’s children and grandchildren and theirs as well were her wild friends for years.

Koedt was known for telling people to look ahead and not back, urged them not to hold grudges or waste time in self pity.

Niece Nina said she thought that came from an incident in her own life: Inger’s father was shot by a burglar in the 1930s and died as his daughter held him. Nina Koedt remembers Inger telling her that in her depression she found something inside, a faith not religious, that “gave her an inspiration to choose life.” She needed it later: Her husband Bob died of suicide. She survived cancer in her 90s, but it killed her son Peter, a well-known mountaineer in Jackson.

The war and what she did remained important to her.

“She didn’t talk about it unless you asked,” Craighead said. “It was a war memory, and they realized the importance of that kind of force, of Nazism, what it could do in the world, and they never forgot. Inger was always quick to defend people who were under any sort of authoritarian threat.”

In a memoir of her life last year for the Jewish Foundation for the Righteous, Inger Koedt said that a difficult choice to do right was a strength that could be needed again.

“The Danes felt that it shouldn’t happen to our Danes, to other human beings, it was just agreed upon,” she said. “I personally think it could happen in any country, like it did in Germany.

“When I was younger I was naive enough to think that the Holocaust couldn’t happen again. But now I think it could. And that’s why we have to prevent it. We have to keep the memories alive.”

When Koedt died, her longtime caretaker, Sylvia Vroman, opened all the windows in her cabin, a Danish tradition that it’s believed lets the soul of the dead person begin its journey.

Inger Koedt’s family is planning a memorial for her in September.