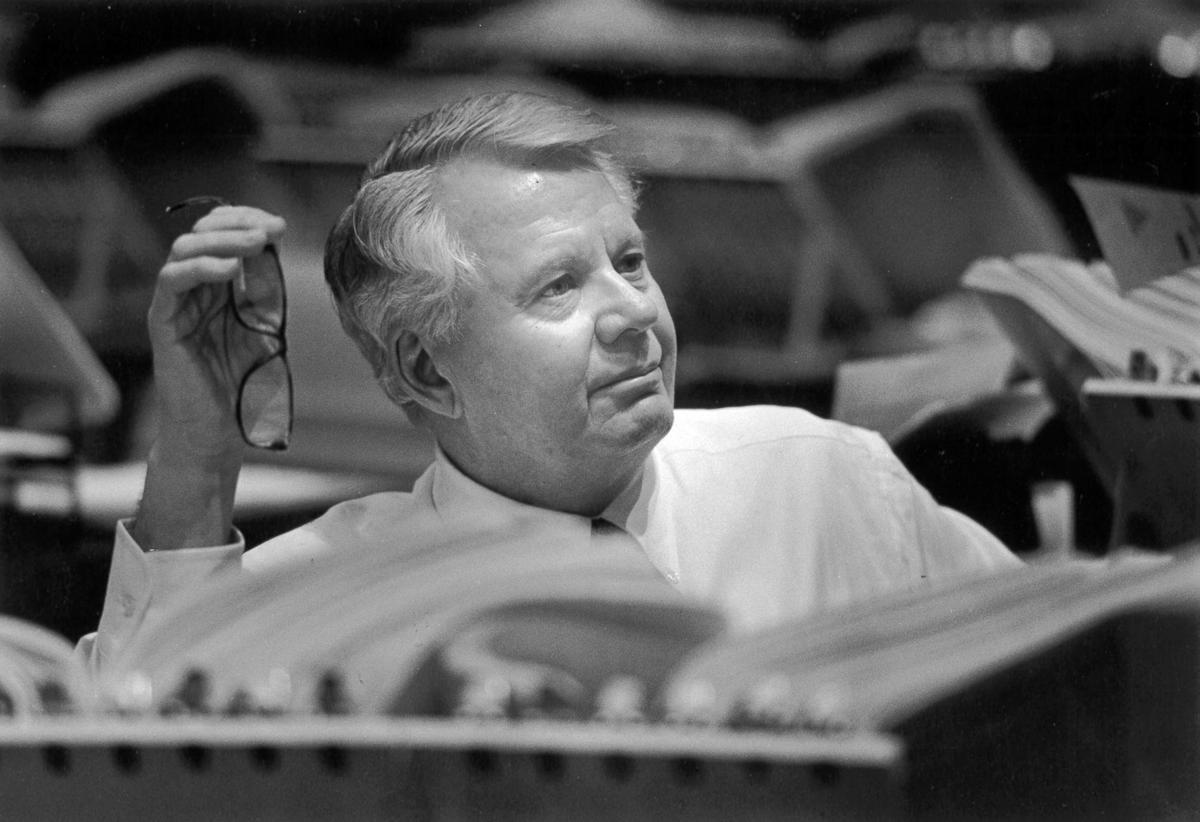 Freshman Sen. Grant Larson listens to discussion of a proposed bill in the Wyoming Legislature in 1994. He served 16 years, two as president of the senate. 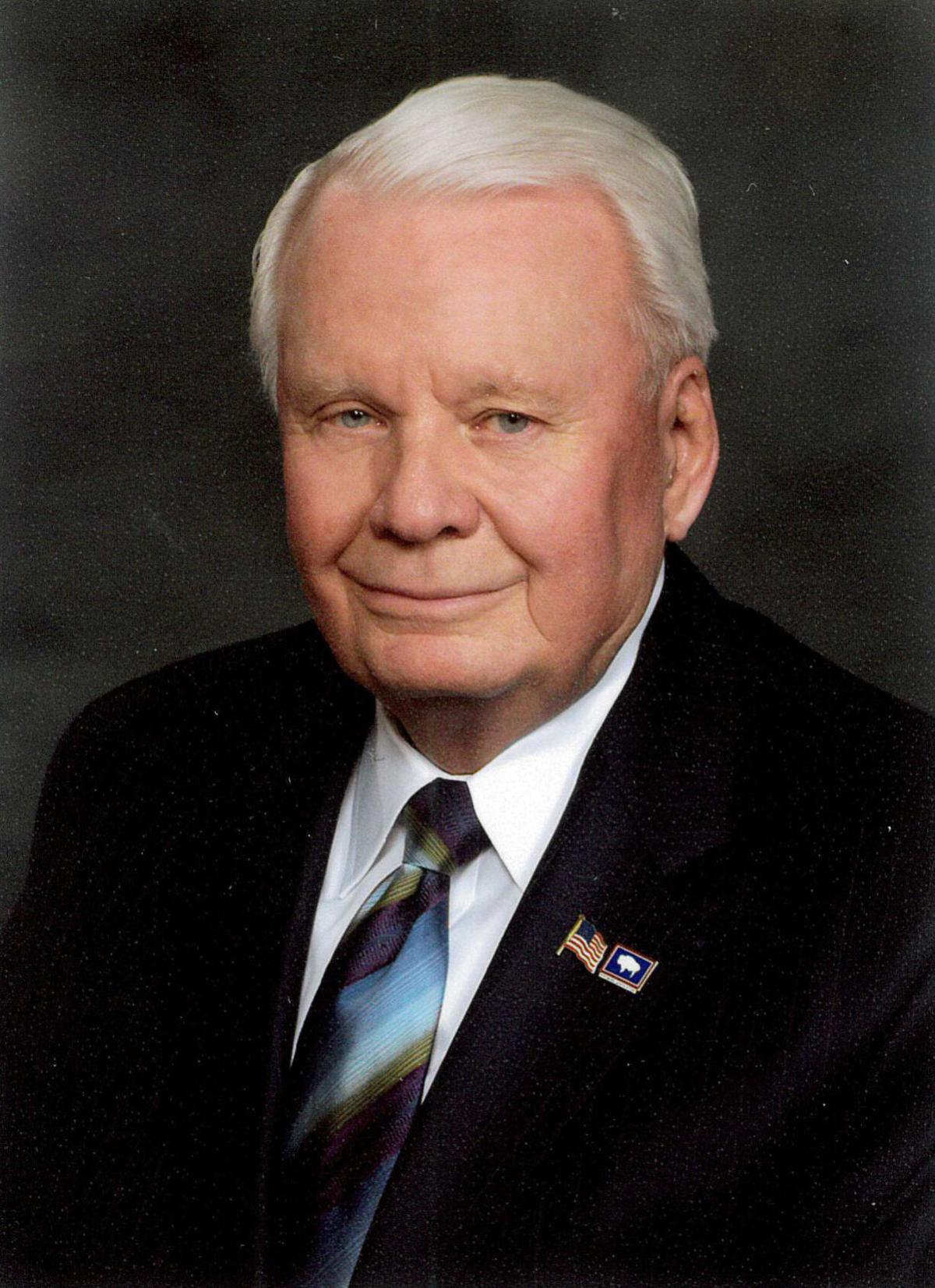 Grant Larson came home on a pass from the Air Force in 1957 with his wife, Maralyn, and went shopping for a place to build a house.

Jackson saloon owner Lewis Gill took them out to some unwanted land he’d bought with gambling winnings and subdivided. The Gill Addition was up against the fence on the south end of the National Elk Refuge. The view was of the huge flat expanse of the refuge, framed by East Gros Ventre Butte on the left, Miller Butte on the right, Blacktail Butte between them in the distance.

Grant and Maralyn, married just three years before, loved the spot but didn’t have the $1,100 that Gill wanted for two .17-acre lots. They asked Gill if he would carry a note. He said yes, at 6%.

Grant Larson hesitated, asked Gill: “How much down?”

Larson laughed when he told the story in 2016, recalling how Gill, hands in pockets, looked up, examined a cloud or two, and said, “Could you give me a hundred dollars?”

Grant and his father and younger brother David built the house in 1962. Grant and Maralyn made it their home for near six decades before Larson died Sept. 11, having spent a life in business and government that from the 1960s through the early 2000s made him one of the best-known people in Jackson Hole.

During those years Grant Larson was one of those guys you might see at just about any public meeting you went to, at the lunch of any civic group, at any community event. He became the politician involved in everything.

But it wasn’t “politics” to Larson, not in the way most people think of it. When Larson began his first term in the Wyoming Senate in 1994 he talked to the Jackson Hole News and rejected the word and its common connotations.

“It isn’t politics I’m that interested in,” he said. “It’s having a commitment and desire to have an effect on what’s happening.

“In my mind, the politicians themselves, the campaigning and all that is probably the worst part of the whole process.

“It’s the interworking of the whole thing” that Larson said was the point, “the way bills come through the process, the way people are able to get their Legislature to express their interest.”

“He always had a feel for community betterment,” his brother David, a former Jackson town attorney, said last week. “He wanted to allow the community to grow and become a better place to live.”

To people in Jackson today the Larsons seem like pioneers, but they were latecomers when they arrived from Utah in 1950, a good half-century after the Hole was settled.

Grant Larson was born in 1933 in Provo to Clyde Larson, a traveling candy salesman, and Afton Pack Larson. Both made ammunition at the Remington Arms Plant in Salt Lake City during World War II, and with them working the same shifts 10-year-old Grant “would get himself up and off to school, and sometimes he didn’t see Clyde and Afton for four or five days at a time,” according to Afton’s 2007 obituary: “This made him a very self-sufficient — and some may even say a hard-headed — young man.”

After the war Clyde joined a family photography business and Afton worked as a waitress. They added sons David in 1944 and Karl in 1946. The family moved to Jackson when Grant was 17. They opened the Silver Spur Cafe where the Wild By Nature Gallery is today and in 1953 moved around the corner to Town Square and next to the Million Dollar Cowboy Bar.

Grant’s parents were hardworking, and not just at the cafe, where they served free turkey dinner for moms on Mother’s Day and worked a full shift the day of their 25th wedding anniversary. Clyde was active in Rotary and with the Chamber of Commerce, focusing on tourism and transportation, which led to an appointment to the Wyoming Highway Commission in 1964. Afton volunteered for St. John’s Hospital work and was president of the Business and Professional Women chapter.

While at the University of Utah, in 1954, Larson married Maralyn Holman. Larson graduated and was commissioned an Air Force second lieutenant. He became a pilot, got out, was recalled to active duty during the Cuban Missile Crisis and left the service as a captain.

Back in Jackson, Larson became involved with the Silver Spur and other family endeavors. He also started Indian Village Drive-In, a restaurant with car service. The North Cache Avenue business, a reminder of Jackson’s old-style tourism, had tipis set up and brought in Shoshone and Arapahoe dancers from the Wind River Reservation near Lander.

He and Maralyn opened The Valley Shop, selling office supplies and other necessities, ran the Prospector Motel and built and sold the Elk Refuge Inn. Larson was an early investor in the Jackson Hole Ski Resort and opened the Valley Station Cafeteria at the base of the Aerial Tram. He was an investor in the Pink Garter Plaza, Jackson’s first mall-style development.

He became known to many as a director and board chairman of Jackson State Bank.

Bank owner Dick Scarlett said Larson was a natural, despite lacking banking experience, because of his personality and how anchored he was in the community.

“Grant has such a depth of knowledge of Jackson Hole,” Scarlett said. “He worked his way from the bottom up. He washed dishes, bussed tables, cooked meals, was in the restaurant business, and then he invested, bought some real estate, was in commercial businesses.

“He was a smart guy,” Scarlett said. “He studied things, he didn’t make quick decisions, he thought them through.”

Larson served on the board for 30 years, until he figured it was time to move on. People who remember his departure recall him saying, “When the horse is dead, it’s time to dismount.”

While involved in business Larson had also moved into the civic and government work that became his focus: When his father died in 1968, two years after being appointed to the highway commission, Grant was appointed by Gov. Stan Hathaway to fill the seat. He was vice chairman in a year.

Larson had already been on Jackson’s first planning commission. He also was involved in the Jackson Hole Chamber of Commerce and became its president in 1966-67; served 13 years on the Jackson Hole Airport board; and worked with the Teton County Republican Central Committee for six. He was a member of Rotary and the B.P.O. Elks.

He was elected a Teton County commissioner in 1992, after being pushed to run.

“We asked him to run for county commissioner,” said bank owner Scarlett. “He said, ‘I’ll run, but I don’t like raising money.’ I said, ‘If you run, I’ll raise the money’ ... and we said that when he ran for the Senate.”

Larson had a long career of service behind him when the main act of his public career began in 1994 with his election to the Wyoming Senate. He represented District 17, from South Park and Jackson north through most of Yellowstone National Park.

Larson went to Cheyenne not with an idea to change the world, but to fix a problem, then find another problem and do it again. He was interested in the practical, not the ideological.

He suggested to colleagues in 1999 that the state’s sales tax exemption on tobacco was fine for smokers but no one else: “I think it’s inappropriate to pay sales tax on milk, bread and food if you don’t pay it on cigarettes,” he said.

Knowing that tourism was the state’s second-biggest business — first in his district — during his 16 years in the Legislature and two years as president he often focused on highways and air transportation. He knew that Wyoming wasn’t an easy place to get to from just about anywhere, and Teton County was an odd corner in it, and tried to make it easier.

“He was fair, and he never just said no to anything,” said Hank Coe, still a senator from Cody, and who met Larson in 1994. “And when he got after something, he was just relentless. ... He focused, was very thorough, when he was presenting things on the floor he was prepared, he was ready, and when he got up people listened.”

Jackson hotelier Clarene Law, who served in the Wyoming House during Larson’s Senate years, said last week that he differed from many politicians today in that “he was a healer who knew how to work with Democrats and Republicans to get things done for the people of Wyoming.

“He was a man who led with all his heart and cared deeply about the people he represented,” she said.

If not for COVID, she said, “I think all five Wyoming governors would have been at his funeral.”

Larson had several heart surgeries in recent years. He had a lung infection in the days before he died in the house he and his family built.

“Grant grew up thinking that’s the way you do things,” David Larson said. “That was ingrained in him from his youth.”

Grant Larson summed up his approach to the Senate, and his life it seems, in 1994: “The bottom line — you vote your conscience and what’s in the best interests of the state and your district. ... The only one I have to live with is myself.”