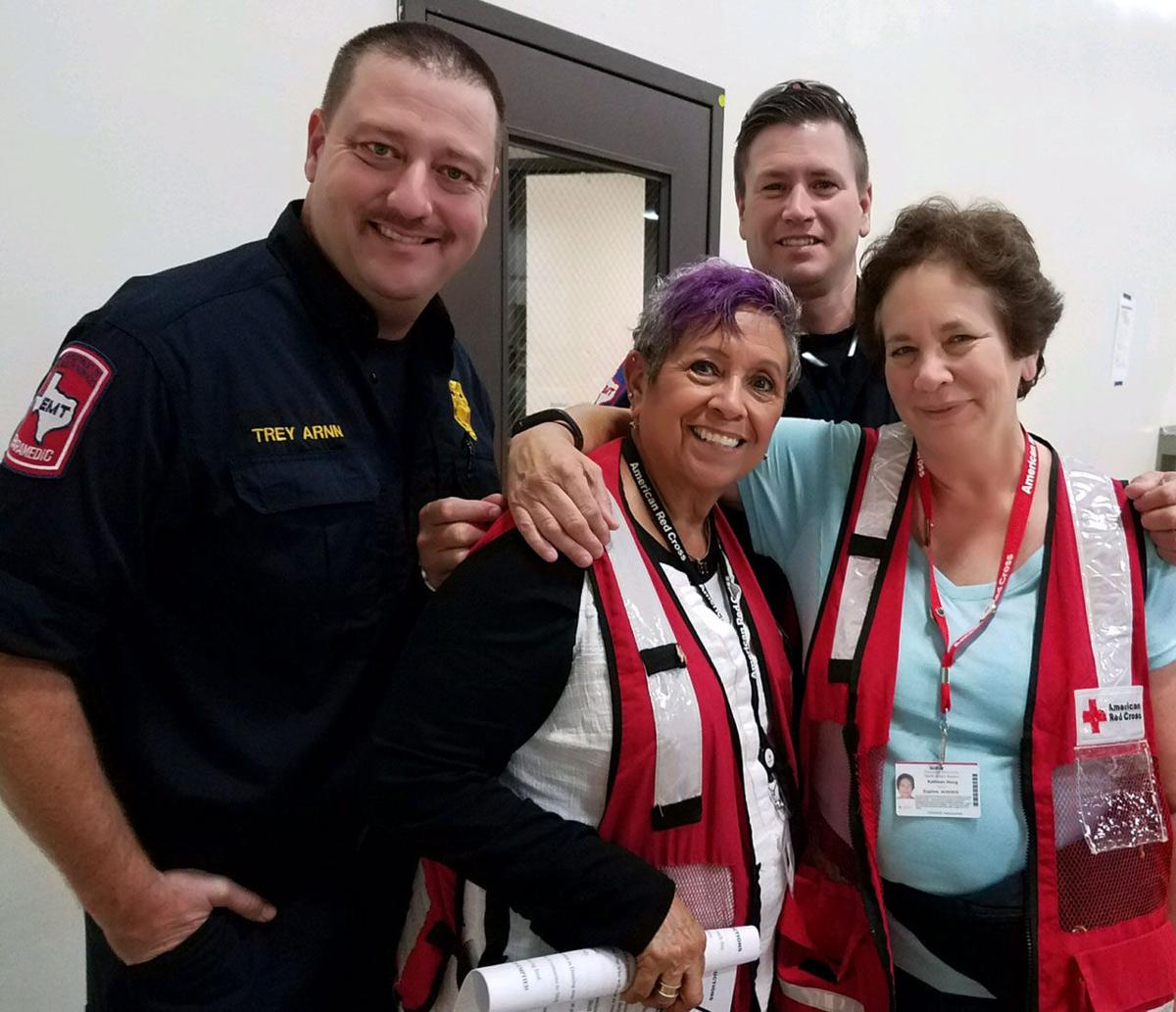 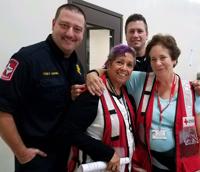 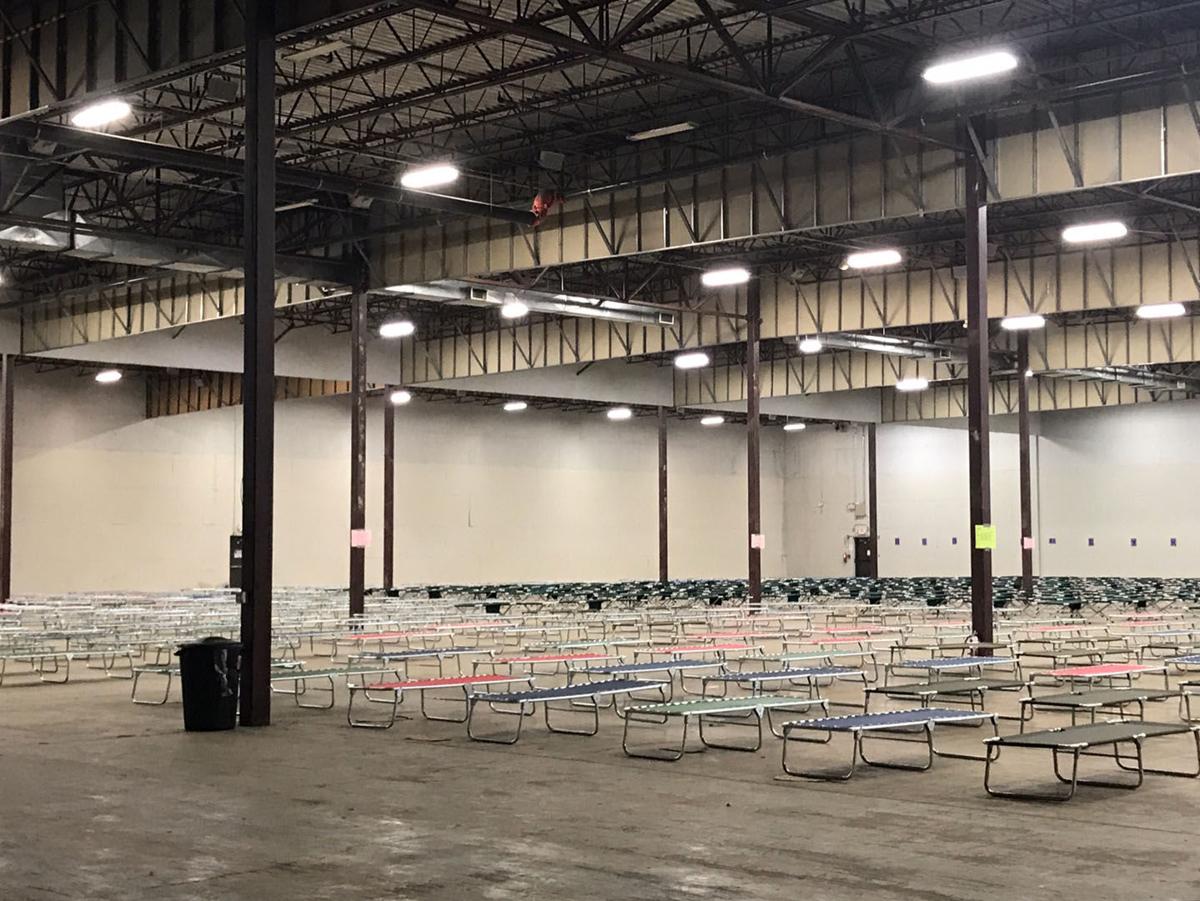 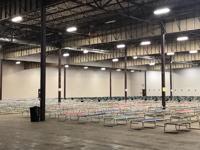 A warehouse in San Antonio was converted into a Red Cross shelter by volunteers like Raumaker.

A warehouse in San Antonio was converted into a Red Cross shelter by volunteers like Raumaker.

Sylvia Raumaker has seen the devastation of Hurricane Harvey firsthand.

“People literally come in and some of them don’t have anything,” Raumaker said. “They come in barefooted. They come in wearing wet, muddy, dirty clothes. It really is terrible.”

Raumaker is one of several in the Teton County area who felt compelled to head south to help with Hurricane Harvey relief efforts — volunteering at Red Cross shelters, animal shelters and food banks.

An avid volunteer for the American Red Cross, Raumaker was dispatched to San Antonio just days after Hurricane Harvey hit Houston. She has been there for about a week and a half — standard deployments are two weeks — to help set up a shelter for approximately 2,000 to 2,500 displaced people. She plans to come back for three more weeks this fall.

She and other volunteers set out to make an abandoned warehouse as useful as possible. There are serving stations for food and drinks, a registration desk, an area to seek medical care, a play area for children and more.

“Everything that we have goes into making a person feel comfortable when they come in,” Raumaker said. “We have this set up to try to take care of all of their needs.”

Raumaker said that, simply put, she went to Texas to help people. She has been deployed 13 times to natural disasters in Gillette, Florida, Louisiana, Wisconsin and New York.

“Most of the responders that come out and volunteer for the Red Cross do it because we want to help other people when they are in the worst situation possible,” she said. “We just want to lend a helping hand. If we can offer a positive for them, like a smile, sometimes it’s just a smile that they need right then and there.”

Raumaker has noticed at least two pregnant women who have come into the shelter, given birth at a hospital and come right back. She was looking forward to seeing the newest baby on her next shift.

“I’m so anxious, I can hardly wait to get back to see that little girl,” Raumaker said. “Life is going on as this shelter is happening.”

Police, firefighters and the Texas State Guard are at the shelter to make the environment safe for evacuees, who are being bused roughly four hours from the Houston area.

“These people have survived a major disaster, and they’re being bused in because they’ve lost their cars. They have no transportation and shelters in their area are filled up,” Raumaker said. “It’s just an amazing situation.”

Raumaker said there isn’t just one emotion on display when evacuees make it to the shelter.

“I’ve seen the full range of emotions,” she said. “People come in here and they don’t want to talk. They are sad, they are cold, they are dirty and they are hungry. All they want to do is just get into their cots and try to rest.”

A lot of people come in with garbage bags full of possessions, if they’re lucky. There are showers, too, a welcome relief and way to get warm and clean before changing into other clothes.

But after a shower and maybe some food, what’s next?

The loss of control and dependence on others can be overwhelming, Raumaker said. Some people who are in the shelter have been plucked from rooftops and waded through high waters to get there.

“You start at the very bottom because so many people have lost everything right down to their phone and their power cord,” she said. “You’ve got to take it one step at a time, but that is what is so hard to do. We all want to give them a solution, but it’s not that easy.”

Paperwork is something Raumaker said is frequently lost. People don’t have their wallets, and therefore, their identification.

“Every place wants an ID,” she said. “If you don’t have that, you have nothing.”

The hurricane has wreaked havoc, she said. She feels empathy for people who are starting at ground zero.

“I can’t imagine losing everything,” she said. “My house, my car, my independence, and all of a sudden I’m relying on government agencies and other people, like the Red Cross, to help me. This is going to take months to recover from.”

She urged people back home to think about what it’s like in Texas.

“We’re in the comfort of our own homes; we’re looking at the mountains,” Raumaker said. “But put yourself out of that and put yourself in this situation. It’s hard to relate to what goes on here unless you’re in a shelter and you see it firsthand.”

But Raumaker feels like she and other volunteers from around the country are making a difference as Texans start to pick up the pieces.

“When you get a hug from this upset woman and she says, ‘Thank you,’ you say, ‘You don’t need to thank me, this is what we do,’” Raumaker said. “That’s why I volunteer. That hug as a thank you. It doesn’t matter what I’ve had to do to get there.”

Rybak used to run the Jackson/Teton County Animal Shelter, and she said the dogs she’s helping in Houston aren’t like any dogs you would see in Jackson.

“They’ve had it rough, even if it’s just for a few days,” Rybak said. “They’re skinny. It just gives one a really good feeling to know you’re helping an animal. They depend on us, and when they’re in a situation where their people are gone, then somebody has to help them out because they can’t speak for themselves.”

The temporary shelter is at the Montgomery County Fairgrounds, and is taking in animals from shelters that were flooded or from shelters closer to the affected area so they can make room for more dogs.

“We also have people who are bringing animals here that they have found as strays,” Rybak said.

The dogs are scanned for a microchip, visit with a vet and then are placed in rows and rows of metal cages.

The shelter holds the dogs for 30 days in hopes of a reunion with an owner. Afterward the dogs are sent to other shelters or rescue groups to be adopted. For example, Jackson-based nonprofit Dog Is My Co-pilot is coordinating a flight to Texas in late September to bring adoptable dogs to places like Wyoming and Idaho.

For Rybak seeing animals reunited with their owners is the most rewarding part of the work.

“That dog is so excited and happy to see their people,” she said.

Hoback resident Pete Elliott works for Camp Davis in the summer and in Teton Village in the winter. He saw the shoulder season between his jobs as an opportunity to contribute to relief efforts.

“I think it’s just been a part of my upbringing,” Elliott said. He grew up going on disaster relief mission trips with his church in Buffalo, New York, to places like New Orleans and Haiti.

Elliott is packing up his car this weekend and going to work in food banks in the area affected by the hurricane.

“They need a lot of volunteers,” he said. “I’ve worked in kitchens for a long time, so I’m hoping I can use those skills to help feed people down there.”

He posted on the Garage Sale Facebook group requesting that people give him anything they would like to donate.

“A few people have contacted me saying they have a duffel bag full of old clothes,” Elliott said. “One lady said she was going to buy a bunch of dog food and baby stuff. Whatever people are willing to give me, I’m going to take down there.”

Julie Barnes is a reservist with the Federal Emergency Management Agency. She’s on standby right now, which means she could get the call at any time to be deployed to a disaster relief operation on 24-hour notice.

“Years ago, when I was watching Hurricane Katrina hit, I was an EMT in Pinedale at that time,” Barnes said. “I remember just standing there, being shocked and heartbroken about what I was seeing, and thinking there must be some way that I can get involved and I can help.”

She signed up to help with FEMA, and has since been deployed to Oklahoma, Louisiana, Georgia and West Virginia, among other places, for natural disasters like tornadoes and hurricanes.

She works as a liaison between local congressional offices and relief operations on the ground. Barnes is unsure where she’ll be deployed next. She said it’s possible she’ll be sent to help with relief in Texas, but she could also be sent to Florida or Puerto Rico to help with impending Hurricane Irma.

“The western part of the country, we just don’t see those things. We don’t have any understanding of the magnitude of Mother Nature’s fury,” Barnes said. “You see the remnants of people’s lives scattered about, and clothes hanging in trees, or portions of walls. It’s very heartwrenching, and it’s also very touching to see the resilience of those that are affected.

How to help Houston

Those who are interested in helping the relief efforts can contribute to a number of local organizations on the ground in Texas.

Donations to United Way of Greater Houston can be made on their website or by texting UWFLOOD to 41444. Donations can also be made to the Hurricane Harvey Relief Fund, the Greater Houston Community Foundation, GlobalGiving, The Center for Disaster Philanthropy Harvey Fund and the Salvation Army.