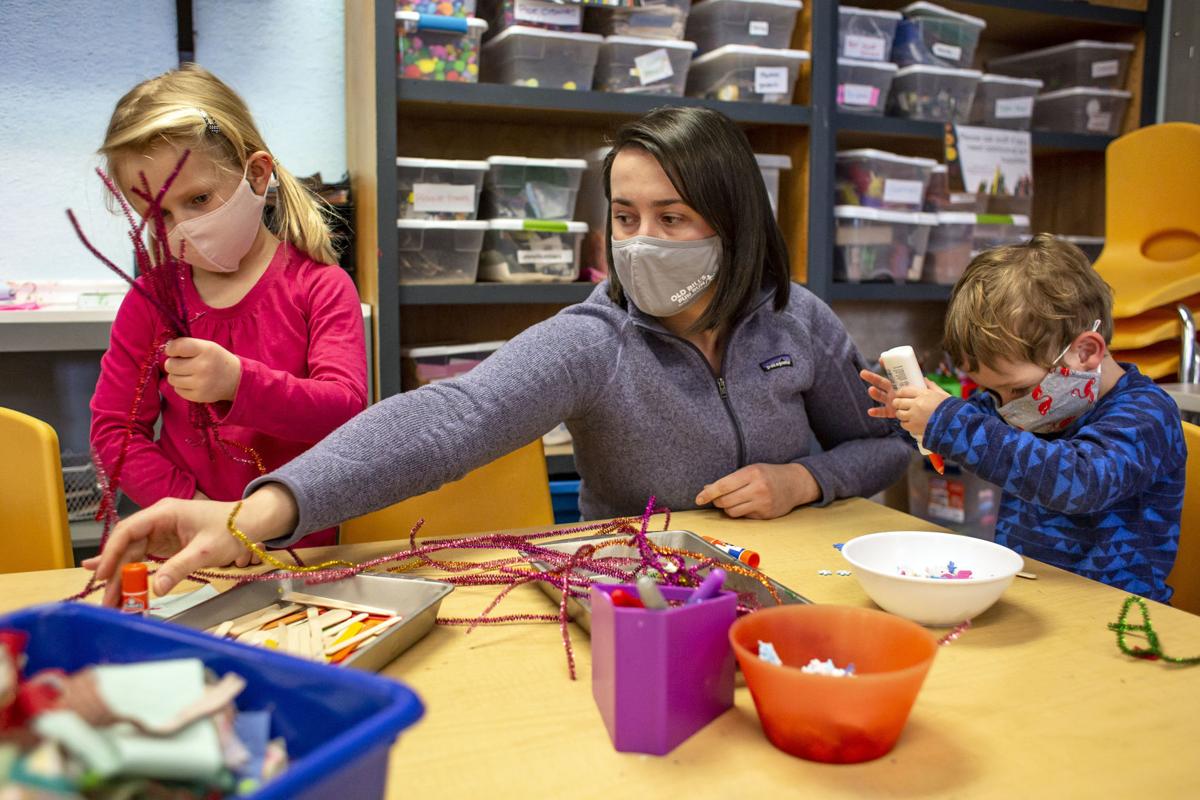 Oksana Onysko helps Ren Riddell, 5, left, and Callahan Lockhart, 2, who she helps Friday with arts and crafts at the Jackson Hole Children’s Museum. A nanny, Onysko is looking for a home to open a small daycare of her own. 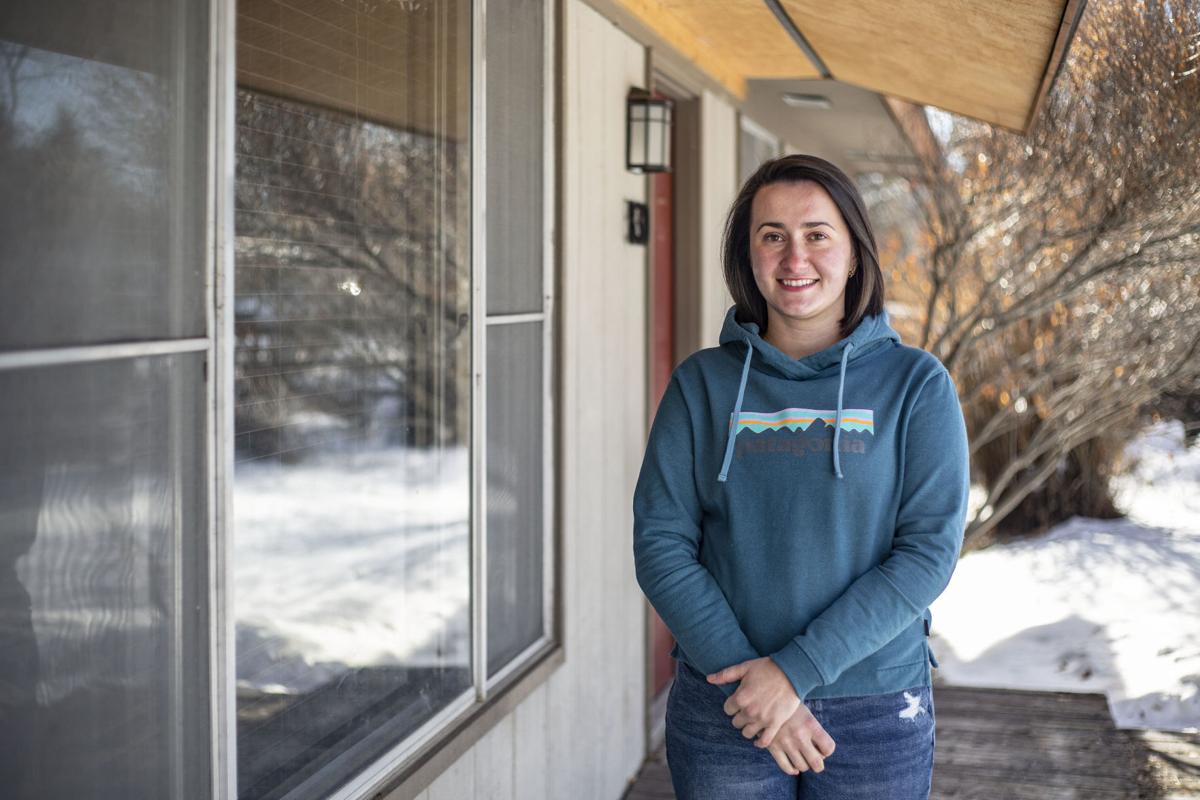 Oksana Onysko is attempting to draw attention to the lack of childcare services in Jackson, especially during the COVID-19 pandemic. Onysko works as a nanny for several local families. She has obtained a childcare license to expand the number of families she can serve and hopes to be able to open a daycare of her own.

Oksana Onysko helps Ren Riddell, 5, left, and Callahan Lockhart, 2, who she helps Friday with arts and crafts at the Jackson Hole Children’s Museum. A nanny, Onysko is looking for a home to open a small daycare of her own.

Oksana Onysko is attempting to draw attention to the lack of childcare services in Jackson, especially during the COVID-19 pandemic. Onysko works as a nanny for several local families. She has obtained a childcare license to expand the number of families she can serve and hopes to be able to open a daycare of her own.

Oksana Onysko has looked at over 20 houses in the last several months but has yet to find what she’s searching for. It needs to have a fenced yard or be near a park, shouldn’t be too close to neighboring homes, must have sufficient parking and square footage, meet fire code and fall under either commercial zoning or residential zoning as long as it’s outside a community with a homeowners association.

Onysko’s search is not just for a house to live in but one where she can open a child care and nurture up to 10 children in the comfort of a home setting. Such small neighborhood child cares fill a gap for parents counting down the years until their children go to kindergarten. They can offer a small-group, home-based choice for working parents and parents who want to build a child’s social skills before school.

The only problem Onysko’s found is that it’s next to impossible to open one.

“Knowing how long the waitlists are for child care centers that already exist in Jackson, it’s very important that this topic is being discussed more,” Onysko said. “Because providers such as myself can help those parents that are on those waitlists, and it’s a good buffer between getting them into an affordable child care center.”

Onysko has lived in Teton County for five years and provided services as a nanny for many families. With increased requests, especially following closures in March, she has decided to pursue a child care license from the Department of Family Services that allows her to take care of three to 10 children.

The process is fairly easy: submit an application, pass a background check, provide a medical form and pay $50. She hasn’t gotten to these steps, however, because the licensor must first verify that the building she’s using — which she doesn’t have — meets several requirements.

Not yet finding the “magical location,” as she calls it, is not for lack of trying.

Many landlords are concerned about parking, though there would be only a few cars at a time for short periods of the day. They’re also worried about noise, but Onysko has been careful not to pursue houses that are too close to others. Additionally, she said, owners have misconceptions about insurance. The provider would be the one liable for child care insurance, not the owner.

The larger issue is that homeowners associations consider child care to be a commercial activity, and commercial activity is forbidden within most communities governed by an HOA per their covenants, conditions and restrictions, aka CC&Rs.

Certified child care providers in Teton County grew from 25 in 2012 to 31 in 2019, though average capacity of the commercial providers has decreased, according to Jackson and Teton County’s Childcare Baseline Inventory, released in April. The number of family child care homes, however, has decreased from seven to five in that time and may even be lower now.

The COVID-19 pandemic prompted Terri King to close her home day care this summer after 33 years of cooking meals, wiping tears, giving hugs, playing dress-up, teaching the alphabet and showing children how to share toys. It was more a calling than a business, and her voice catches with emotion as she talks about closing before she was ready.

“I miss those kids,” King said.

But she also needed to care for her parents, and the pandemic made it too difficult to do both.

King understands Onysko’s plight. When she opened her home day care in 2000, the majority of her Hidden Ranch neighbors took her to court claiming her day care violated subdivision rules. Neighbors complained that her day care would bring too much traffic to the residential area. But the judge ruled in King’s favor, saying the rules did not explicitly forbid a home day care.

Still, King followed a compromise agreeing to take only nine children instead of the 11 typically allowed under town rules for home day cares at that time. She also received an outpouring of support from the community, she said.

“It was nice to see how many people would fight for children, just being able to [grow] up in a neighborhood rather than an institutionalized center,” she said.

Nina Lenz’s children attended a family child care home. After the owners of that house decided to sell, she helped her provider Cara Polino find a new location, which ended up being Lenz’s father-in-law’s house. It worked out because it happened to be located within a commercial overlay, so it wasn’t subject to HOAs or residential zoning. But she doesn’t think they would have been so lucky if she and her family hadn’t known the system.

Lenz is an advocate for child care in Teton County and thinks more people should be, even if they don’t have children, but she isn’t seeing many improvements on the commercial front.

“When I look around at Jackson, and I see what’s happening in our town, a home day care is the only option to expand,” she said. “Unless there is some developer out there who’s looking to fill this space specifically for child care and then keep the rent at a rate that the child care provider ... can afford to pay, I just don’t know that I see a future of child care within commercial developments in our town.”

Onysko, meanwhile, sees expanding supply to meet demand as a way to maintain quality and affordability.

“Competition helps provide better services and keep rates at a reasonable level,” she said. “I mean, rates go up every year. The more competition those private day cares have, the easier it would be to regulate their rates as well because parents have more choice.”

“It is smaller, it is easier to clean, it is easier to navigate through the exposure,” Onysko said. “Definitely with COVID I think the importance of small family child care homes absolutely increased.”

For King, home day cares have always provided a needed alternative to large centers, which might not be suited for every child and family. King sees value in raising children in neighborhoods in a setting that feels like an extension of home and family.

“My heart breaks for her because home child care is so needed,” King said.

Even so, the likelihood of Onysko getting into a home in the foreseeable future is slim. She’s researched the subject and found that California, Colorado and Texas do not consider home-based child care centers as commercial activity, so they cannot be prohibited by HOAs. She notified Town Council members about this in October and questioned whether they could consider a similar ordinance.

Councilor Arne Jorgensen said the council is willing to discuss the options, but he’s not sure what power they have.

“I and I believe the rest of the Town Council is very focused on doing everything we can on increasing opportunities for day care and child care in our community,” he said. “I think there’s some question in the town’s mind, and the staff, in terms of what can we do legally.”

Jorgensen doesn’t believe they can retroactively pass an ordinance to change standing HOA restrictions. They could consider putting something in place for future HOAs, though “the reality is we’re not going to see a significant number of new subdivisions within the town of Jackson,” he said.

April Norton is housing director for Teton County and former co-owner of the Teton Tiny Tots co-op. She also doesn’t think the town can do much on this front.

“There are a lot of home day cares that are not certified,” she said. “A lot of that has to do with the fact that it’s really, really hard to find a place that will legally allow for a home day care.”

She thinks the shortage of affordable child care could be counteracted with more funds, subsidies and spaces set aside for child care.

“We are failing on some fundamental things,” she said. “I think child care is pretty fundamental to a functioning society. And we’re sort of missing that.”

Jorgensen suggested that the Town Council could consider other public efforts to build additional child care centers or provide subsidies, though it would be difficult with the loss of the general penny and wouldn’t necessarily help the home child care situation.

Onysko knows this, too, but she hopes others who have experienced this problem will reach out and that HOA members might reconsider their CC&Rs.

“This is a major concern for a small town like Jackson, where people are just forced to choose between spending a significant portion of their income on child care or finding a cheaper, potentially low quality care option or leaving the workforce,” she said.

Onysko isn’t certain whether she’ll take her case to the state. She thinks doing something locally first would start the conversation and doesn’t know whether the problem is a statewide issue.

“This is not just the childcare crisis, that we need more childcare establishments,” she said. “It’s the fact that there is no way to open them.”

— Rebecca Huntington contributed to this story.