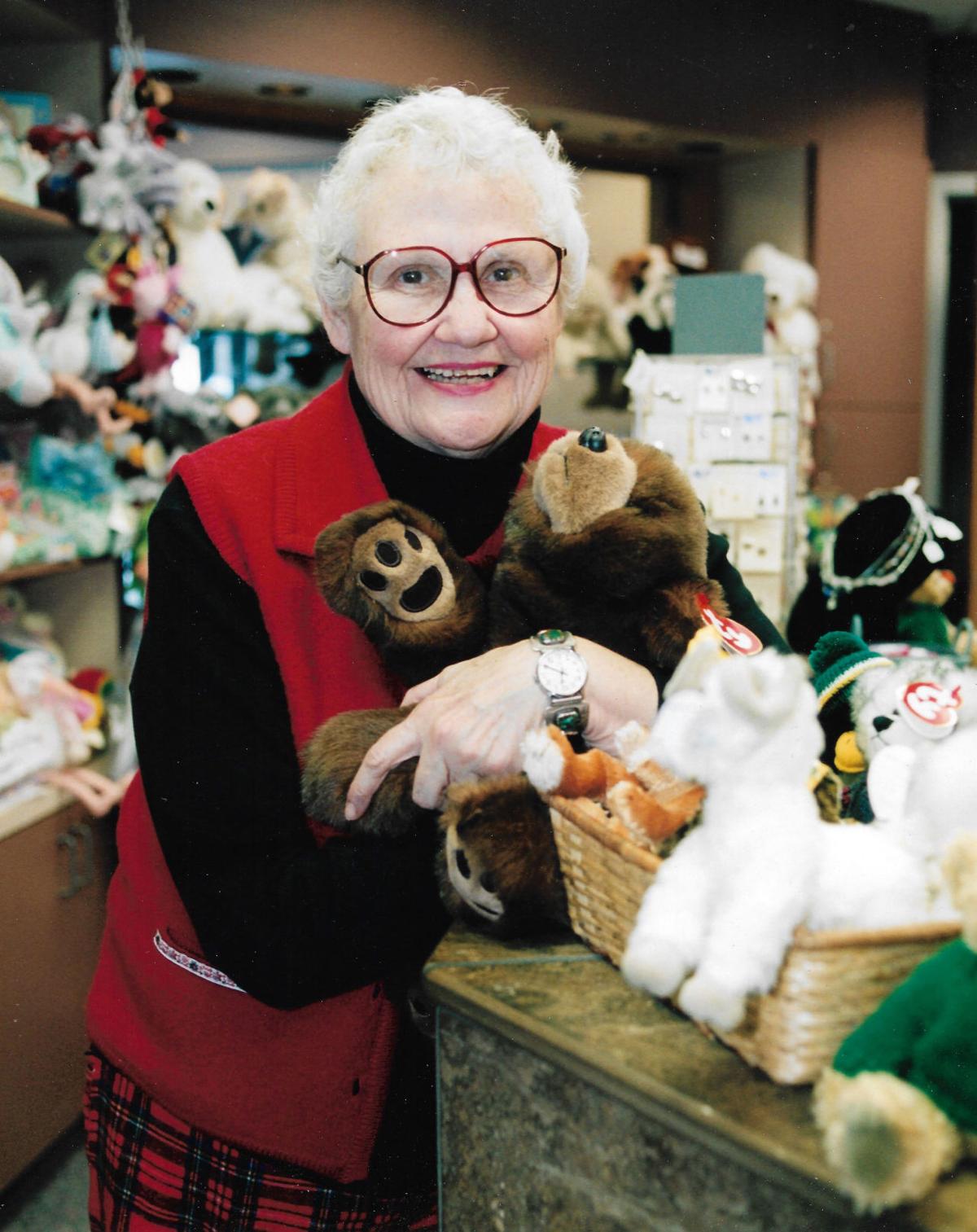 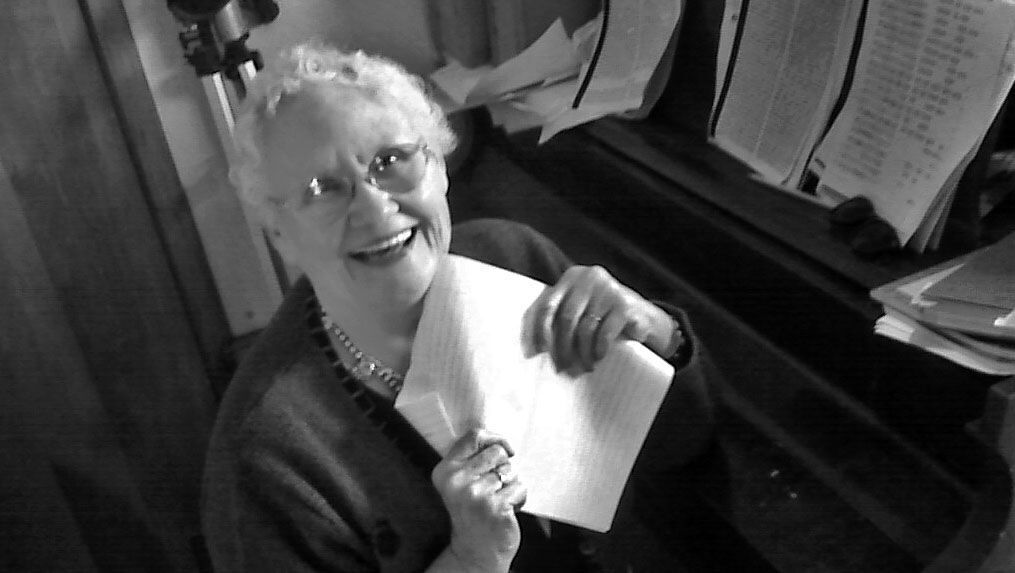 Jean Webber did most of her writing in her head and kept most of what she wrote in there until she was a white-haired grandma and found an outlet and an audience.

At age 70 she became the Gallopin’ Grandma, a yarn-spinning, elbow-throwing humor columnist for Planet Jackson Hole, later JH Weekly, now defunct. She had always been known among friends and family for goofy stories, jokes and weird insights delivered with a bite, but late in life the private Webber went public. Over 15 years she wrote close to 200 columns.

She typically took on subjects that many in Jackson Hole found near sacred, as with her take on the Great Outdoors: “I remind myself that God put the outdoors OUT for a reason, that if you’ve seen one tree you’ve seen them all and that the sunset looks just like the sunrise, only it’s going the other way,” she wrote.

“We always knew my mom could write, and she had a sense of humor,” said Mary Grossman, one of the founders of the Planet in 2002. “She was just a riot, totally in your face. She had no filter. She would tell you how she felt about your clothes.”

Daughter Sarah Webber recalled her mother always being sharp and tart, an entertainer who played to her audience, whoever and wherever.

“She was funny — whenever we were in public, in an elevator or something, she would hold court,” Sarah Webber said. “She would say something and everybody would laugh. Edgy, funny stuff that people could relate to.

“At her water aerobics class she would sit in the corner and talk the whole time. She would never do her exercises,” she said. “She liked to talk ... she drove me nuts.”

Friend Christie Laughery said the same: “I can remember at church getting up to take communion and I tripped over her cane and said, ‘Are you trying to kill me?’ and she instantly said, ‘Yes, but it doesn’t seem to have worked out does it?’

“If people hadn’t heard us before they’d be startled, but it was a comedy routine,” she said.

Webber died Oct. 3 at her home in the Rafter J subdivision, a widow her last three years. She had been sick with cancer for half a year, but still keen of mind until days before she died. And still with the snap.

“She was lively and wicked as ever” in one of their last meetings, Laughery said. “She was on fire, fun, absolutely with it until the end.”

People who knew Webber were often surprised to learn she was the Gallopin’ Grandma, and those who read Gallopin’ Grandma and then met Webber could be just as confused. The real woman and the fictional character were two different people.

Or were they? Mary Grossman said some people were “terrified of my mother ... thought she was the scariest person on earth.” But a great many found that “in real life she was a charming old lady.”

To Grossman, she managed to be both: “She was not sweet, she was never sweet,” she said. “She’s the person in her columns.” But when Grossman and her sisters were young, neighbor kids who had problems at home found “our house was the place you’d feel safe.”

Laughery said Webber was “like the best dessert, hard and crunchy on the outside, soft and gooey on the inside.”

Alice Jean Webber was definitely not born on April 27, 1932, in Corn Cob, Iowa, despite endlessly saying so in her columns. It was actually Des Moines, and she grew up in nearby Ames, both real places. Corn Cob was Webber’s own Oz, Atlantis and Shangri-La, a kind of Iowautopia. But happily deranged.

She was an only child, often alone, “who had to learn to cope,” daughter Sarah said, a fact her daughters credited for her lifelong internal and external monologue. She attended Iowa State University for two years, transferred to the University of Minnesota in 1952 and received a degree in English in 1954.

In 1953 she met Charles Webber and they soon married. They had four daughters. Chuck Webber worked 40 years for Penn Mutual Life Insurance Company; Jean, whatever she had dreamed of doing, concentrated on home life.

Mary Grossman said she and her sisters have seen poems and stories written and illustrated by their mom when she was 10 and 12. They also found, in a closet, rejection letters from New York magazines, turndowns that also offered some encouragement. But Webber had other things to do.

“She had talent her whole life,” Grossman said. “But in the 1950s and ’60s you never pursued your dreams, that’s not what you did. She was too busy taking care of four little kids.”

The family often traveled, and Jackson Hole was a frequent vacation spot. The Webbers moved to Jackson in 1992 after Chuck retired. He hunted and fished and skied, and played the clarinet for 24 years in the Jackson Hole Community Band.

With her husband, Jean enjoyed theater, movies and movie soundtracks, plus the opera, including trips with the kids to the Metropolitan Opera when it toured Minnesota. Mary Grossman remembers going to see Woody Allen and Mel Brooks movies, including “Blazing Saddles.”

“For a suburban Minnesota mom, that was very unusual,” Grossman said.

After moving to Jackson, Jean and Chuck sang in the choir at St. John’s Episcopal Church, and Jean earned an Education for Ministry certificate. She worked with the St. John’s Hospital Auxiliary and in the hospital gift shop. She was president of the Jackson Hole Fine Arts Guild.

But the funny mom went public in 2002 when Planet Jackson Hole began as an alternative weekly. Gallopin’ Grandma debuted in the second issue. The first was headlined “Teacher’s Pet. My Ass.”

Gallopin’ Grandma mostly seemed to be about things happening in Jackson, but in Webber’s telling they were transplanted to Corn Cob, a place of infinite backwardness and frequent dimwittedness. The cast of characters included Mavis Grubb, Mimsy Mingle, Lawanda Vogelheim, Mother Lilliboe, the Fungo brothers and Gertrude the mama pig. The stories often played out at the Coffee Cup Cafe.

The columns were written in a way to make an editor crazy. Daughter Mary said she would see her mom staring off and ask her what she was doing.

“ ‘Oh, nothing,’ she’d say. But she was writing her column in her head,” Grossman said. “She would write them in her head for a week, or put something down on a cocktail napkin, and come down to the office and dictate them to us ... and we typed them out.”

Rich Anderson, editor of the Planet for a while, fondly recalled Webber as “a crusty, crotchety old busybody, quick to complain about any little thing, especially my editing.

“But she also was hilarious and irreverent, and she figured out a way to combine those two sides — crotchety and funny — and create very funny characters and situations and observations.”

Two weeks after Webber died, the house was opened for an estate sale. The only child had a home filled with furniture and books, clothing, a lot of just stuff, homey knickknacks, art, pottery, dolls and stuffed animals, collectibles decorated with cats, chickens and pigs. Mary Grossman said they discovered that her mom was “a Halloween decoration hoarder.”

Grossman said the crowd of people who hit the sale included many who had known her mom over her years in Jackson, people who said they “just wanted to get a piece of Jean.”

Jean Webber wrote nearly 200 Gallopin' Grandma columns, even with a forced temporary layoff during the Great Recession, when the Planet hit hard times.

"During 2008 we downsized, cut everything in half," Mary Grossman said. "I fired my mom. She liked to tell everyone that."

•  "When da Vinci was painting Mona Lisa, I'll bet his mother was hollering at him, 'Why are you painting that skank? You know I can't stand her mother.' Mona is still smiling at that one. Michelangelo's relatives probably screeched 'put some pants on that statue!'"

• "When you see those hideous skinny crab legs at the seafood counter, can you imagine them running after you? They are spiders, you know. Ever see a coconut crab? They are the size of a garbage can and can crack coconuts. Now that's a lot of Crab Louis."

• "Did you know there is a feet phobia? And a fear of bananas? Olaf Crumm in my hometown had both. I have seen his feet and know why. If Olaf stepped on a banana would he be doubly terrified?"

• "Some day you will struggle out of bed, drop the last roll of toilet paper in the toilet, crawl to the kitchen where there are doomed souls moaning that they have lost their homework and are sure that they have some disease and will have to stay home from school. Worst of all, there is no coffee."

• "When I grew up in the big 'out there' long ago, concepts like wellness and working our core were alien to us. If you saw someone running they were probably being chased by someone's dog. Pilates had to be one of the popes, the Obliques were a mountain range in Turkey and Abs, Pecks and Glutes were the real names of the Three Stooges."

• "I don't think there needs to be a new me. I have been friends with the old me for a very long time and we are used to us. We spent  a lot of effort digging our cozy rut and we are happy there. At our age, we are happy to be anywhere."