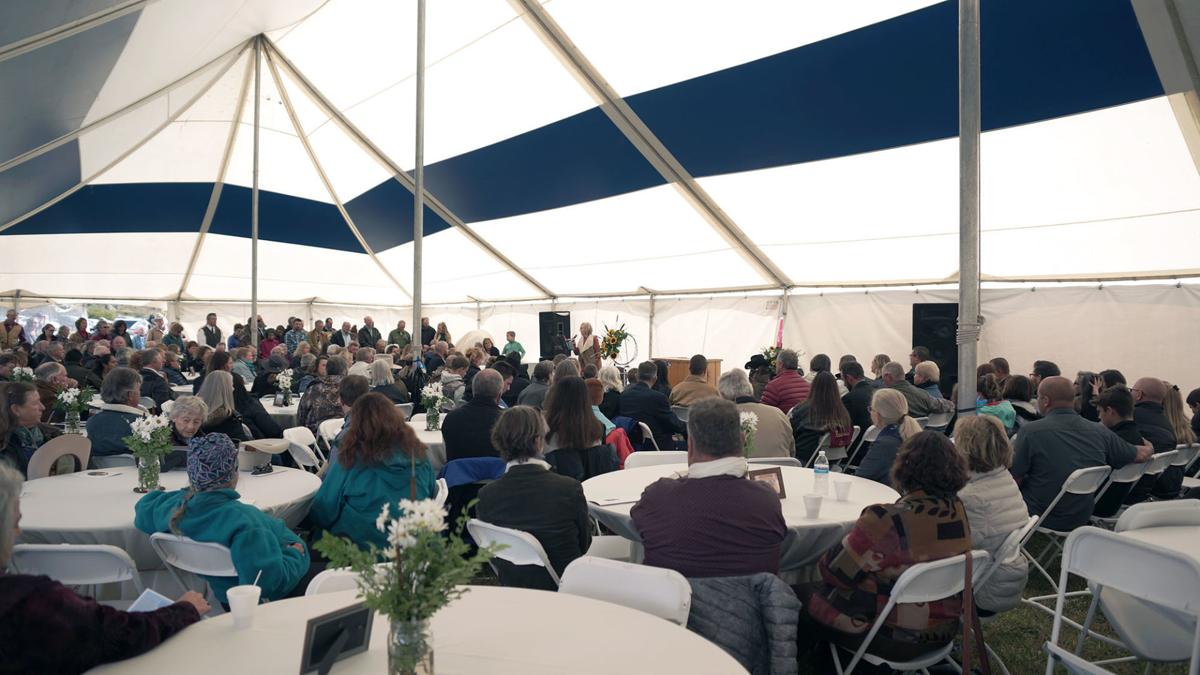 Hundreds of friends and relatives of Bill Saunders gathered Saturday at River Bend Ranch in Bondurant to celebrate his life. Saunders died Sept. 13 from injuries sustained in a crash while riding an ATV. 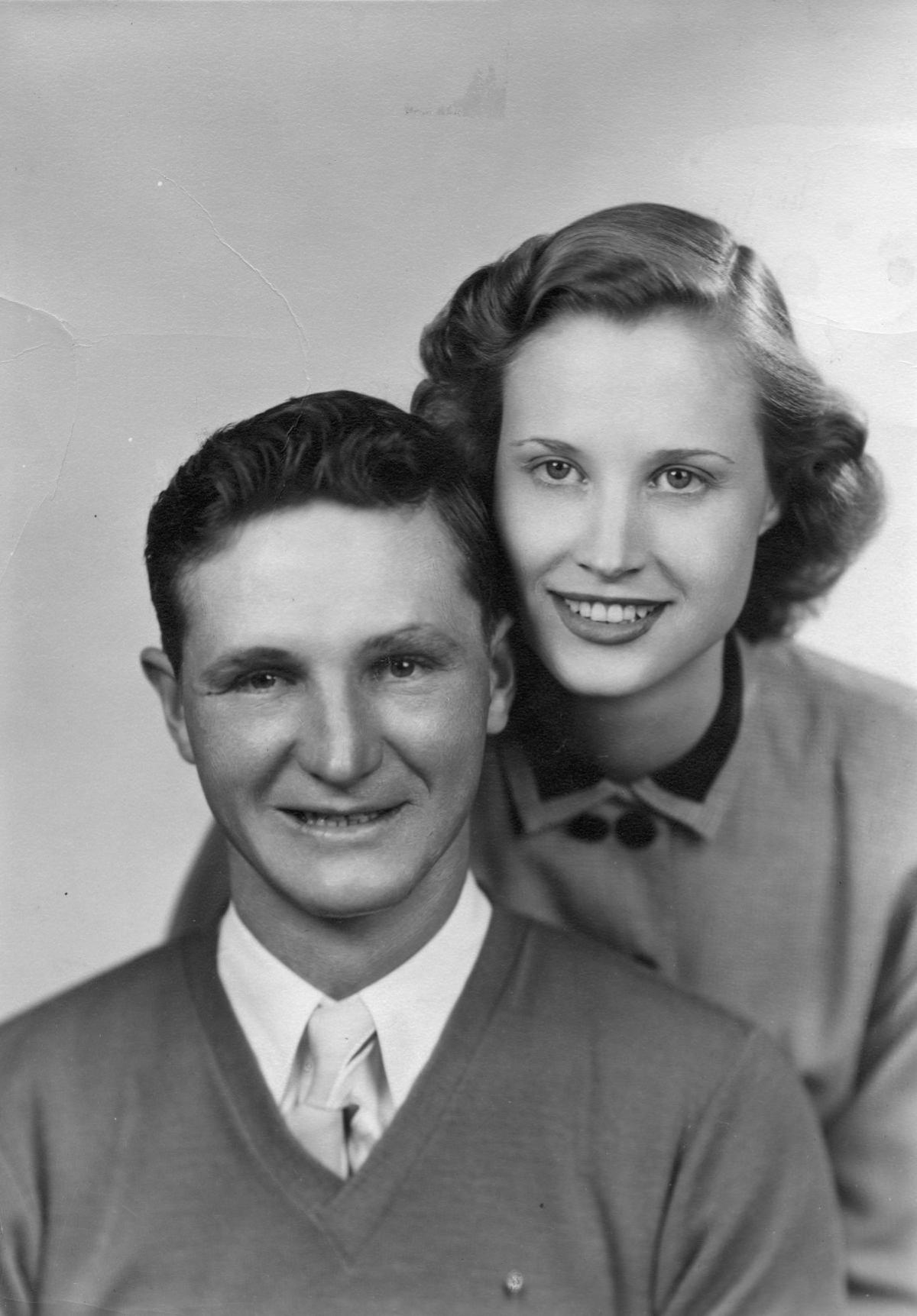 Bill and Martha Saunders married in 1951. 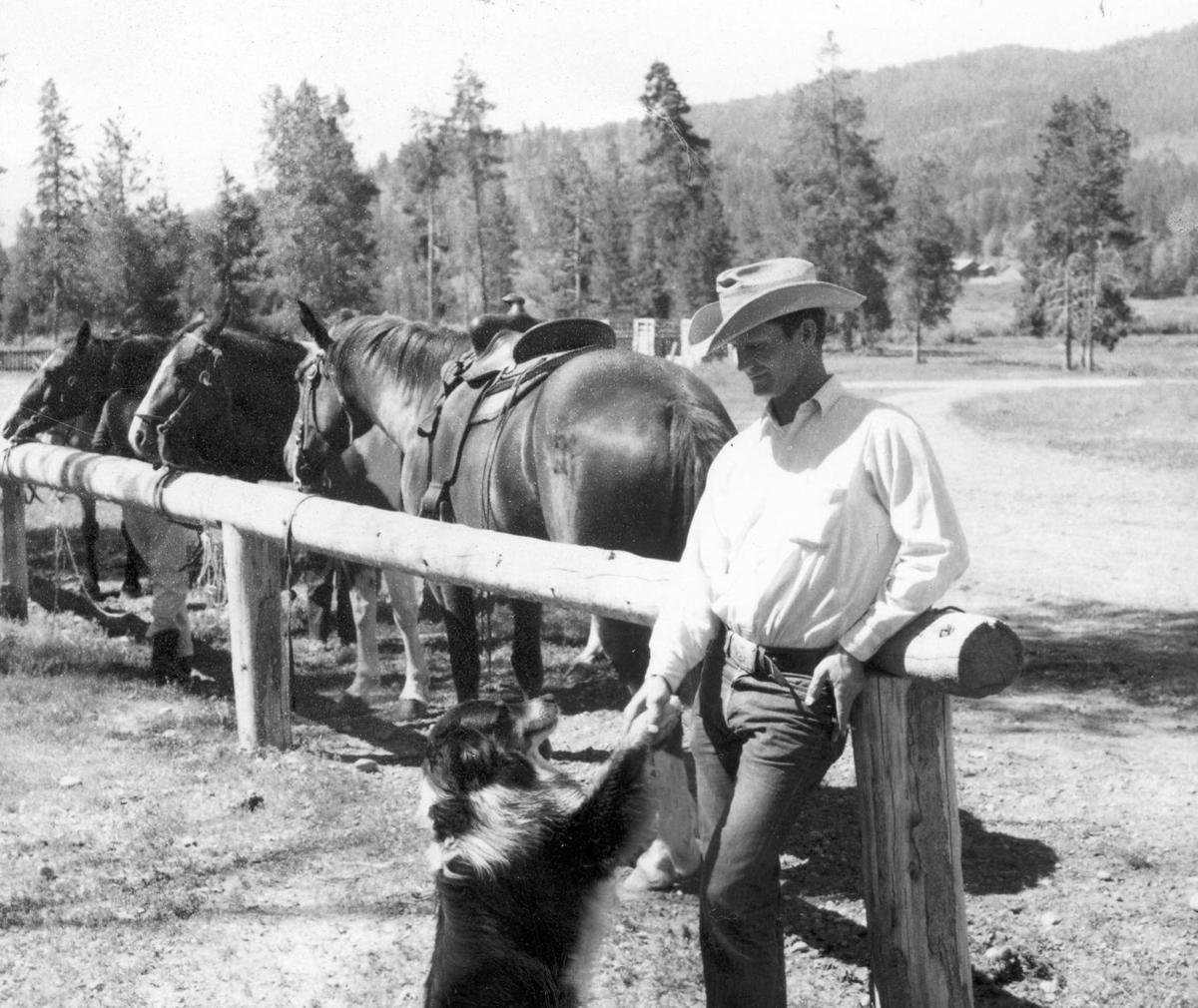 A good Wyoming cowboy has a good dog, he once said. 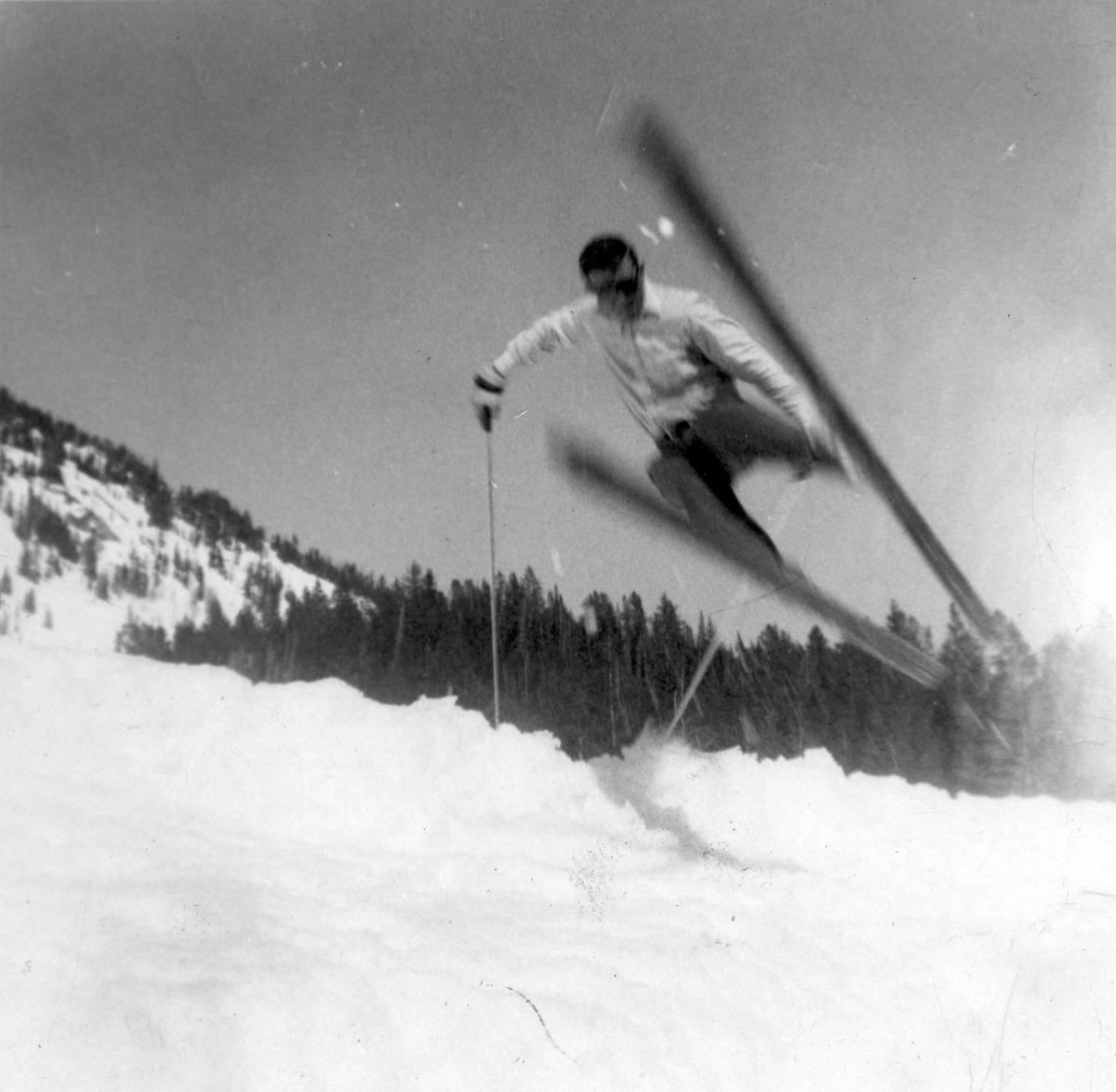 Hundreds of friends and relatives of Bill Saunders gathered Saturday at River Bend Ranch in Bondurant to celebrate his life. Saunders died Sept. 13 from injuries sustained in a crash while riding an ATV.

Bill and Martha Saunders married in 1951.

A good Wyoming cowboy has a good dog, he once said.

Bill Saunders rode rodeo broncs, schussed down mountains on wooden skis and served two years in the Marines as they fought their way from island to island toward Japan.

Saunders died Sept. 13 after a crash the day before near his home in Bondurant. Riding an ATV, he drove onto Highway 191 and was hit by a woman driving a Subaru. He was on his way to take a look at the cattle.

Family had suggested he give up the ATV, said his daughter-in-law Stacy Saunders. Bill Saunders was mostly retired and had stopped driving a pickup on account of his age, she said, but still liked to ride the four-wheeler around the River Bend Ranch, run in recent years by his son Tony. Bill liked to check things on the land where he had ranched on leased range since 1971, where he and his wife, Martha, raised five kids.

But Saunders wasn’t a man to give anything up easily, said his friend Steve James, always advising that the only way to go about life, in skiing or in rodeo, was “to take the line and you win the race.”

“He carried that right on into life,” James said. “When the opportunity came he took it.”

The Town Hill: Ski Tales from a Straight Shooter from Jennifer Tennican on Vimeo.

The River Bend Ranch is in Bondurant, where some ranches and homes are scattered along several miles of Highway 191, about 35 miles southeast of Jackson. The Highway Department sign up the road reads “Population: 100.”

But at a memorial held Saturday for Saunders nearly 400 people showed up, people he’d known and helped over the decades, people he’d impressed and befriended, those who rode with him, worked with, who sat to play cards and checkers, who listened to a lot of jokes.

“It’s overwhelming to see all the people he touched,” daughter Laurie Hanson said. “These are people he’s known for 40 years, 50 years, and it’s a good feeling to see that they remembered.”

Stacy Saunders said the family was gratified but not surprised by the turnout at the memorial.

“There’s not a lot of old-timers left,” she said. “It’s sad that they eventually go, but they do.”

Hanson’s daughter, Bailee Burgess, said she was “in awe at his ability to touch so many lives.” But she also told the crowd her grandfather would have wanted celebration and not mourning.

“He wouldn’t have wanted it to be a sad event,” she said of the gathering. “He would have said, ‘Quit your blubbering and get on with it.’”

William D. Saunders was born Dec. 19, 1925, to Roy Saunders and Mabel Seaton Saunders. Family lore has it that Bill’s arrival was ahead of that of the doctor, who was riding to the blessed event on horseback. Mabel’s mother delivered her new grandson, who joined brother Bobby and preceded sister Darlene.

Saunders lived his early years on his grandparents’ ranch in the far north on land that is now part of the National Elk Refuge. When the Saunderses’ cattle came out on the losing end of an encounter with wolves, the family moved to south of Jackson and ranched land that’s now part of the Rafter J subdivision. Bill’s father and grandfather were also carpenters and went into the building business. The carpentry helped when Bill found an interest in skiing, and he and many other local kids had homemade skis when they began skiing at Snow King Mountain, about to become Wyoming’s first ski hill.

Bill graduated from Jackson-Wilson High School in 1943. He wanted to enlist right away but his mother had to sign for him, and she insisted he cowboy a final summer on the family’s operation on Togwotee Pass.

Just after he turned 18, Saunders was part of the 1st Marine Division assault of Peleliu in the western Pacific. Taking the island was one of the bloodiest battles of the war, but Saunders wasn’t much of one to discuss it.

“He never talked about his military career,” said Richard Thomas, a longtime friend. “I knew him for 15 years before I knew he was in the Marines.”

As Saunders recalled, he just waded over the coral toward the beach, Thomas said, and tried to keep the important things dry.

“‘I held my rifle high,’” Thomas recalled being told. “’And I was worried about getting that box of Lucky Strikes in my pocket wet.’”

Trena Eiden, who worked at the ranch, said she asked Bill about the war and heard the same story about the cigarettes. She asked him if he wasn’t terrified during the landing.

Saunders later served on Okinawa before being discharged in 1946. The Rafter J ranch had been sold, so he returned to cowboying at the Blackrock Cow Camp near Togwotee.

He was still interested in skiing and worked on the crew that cleared Snow King runs and installed a chairlift. He claimed the honor of being the first person to ski the King from summit to base in a tuck. He tried out for the Olympic Ski Team, organized ski teams and coached for the Jackson Intermountain Ski Team. He and Martha also ran a food concession at the bottom of the mountain. He served as president of the Jackson Hole Ski Club.

In the early 1960s he was part of the team that scouted peaks around Jackson before settling on Rendezvous Mountain as the site for the new Jackson Hole Ski Resort.

In the late 1950s he bought the Wilson Rodeo, moving it to Jackson two years later, where it still operates every summer. He ranched in Wilson and guided hunters in the fall. In 1972, after Gilman Ordway bought River Bend Ranch, Bill and Martha and their family moved there to run the place.

In a remembrance, Bill’s grandson JT Saunders, son of Bill and Jennifer Saunders, wrote that his grandfather was “the hardest working man I’ve ever been around ... one of a kind and lived all 93 years of his life to its fullest.”

A granddaughter, Gretchen Kimble, daughter of Bill’s daughter Sheryl, said her grandfather “taught me about grit, to do a job right if you’re going to do it, and that hard work is good for the soul.”

Friend James said Bill was demanding about “doing it right” but also so good-natured that it didn’t hurt when he told a cowboy he’d gone off course.

“He could chew your butt out, tell you everything you did wrong, and just as he turned around you’d see that big smile on his face,” he said.

Many people said that Bill Saunders would live on because of what he did and who he was in Jackson Hole and Bondurant. Bill’s friend Eiden said the place had been marked by him.

“He’s too big a presence to ever be gone,” she said. “A hundred years from now the people who live here will hear, ‘Oh, you’re at the River Bend Ranch, Bill and Martha’s place.’”

“When you live in the hearts of those you love,” granddaughter Bailee said, “you never die.”

When he was inducted into the Wyoming Cowboy Hall of Fame in 2015, Bill Saunders said a few words for a video about his history and thoughts on his chosen work:

"I would go to my granddad's ranch all the time I could get a chance, all summer long and after school. The ski hill was right behind us and I grew up the other half on the ski hill."

"A good Wyoming cowboy is a polite person. He stands up straight and he stands up for what  he believes in, is a gentlemanly person with ladies  around, gets his work done, takes care of his horses and has a good dog."