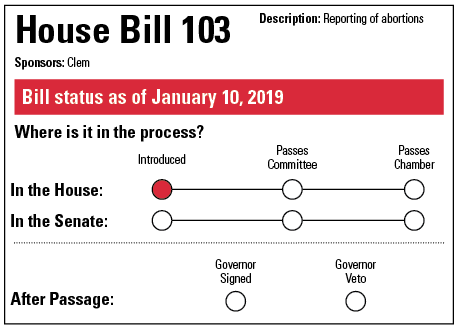 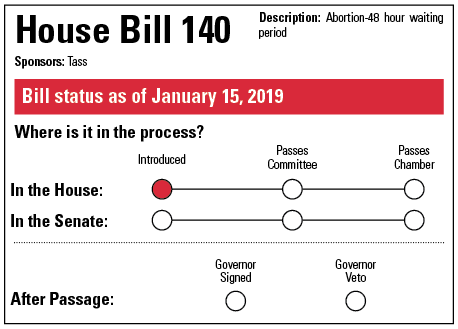 House Bill 140 would require physicians to wait at least 48 hours after a woman requests an abortion to perform one, except in a medical emergency.

House Bill 103 would establish additional requirements for abortion reporting, including documenting the race, ethnicity and marital status of the pregnant woman, the kind of procedure done, the gestational age and length/weight of the “aborted fetus or embryo.” The bill also calls for electronic reporting and fining physicians who do not comply $1,000 or more. Physicians could be subject to disciplinary action by the Wyoming Board of Medicine.

The legislation is sponsored by Rep. Richard Tass, R-Buffalo, and Rep. Scott Clem, R-Gillette. Clem said he introduced the additional reporting requirements because he wants the state to have more information.

“It’s hard to craft good policy without good data,” Clem wrote in an email. “This data is important to the state because it can be used to influence policy decisions on education and family planning, something I think we can all agree on.”

Clem also made it clear that he didn’t support abortion in most cases.

“While abortion is legal, and in most cases safe, we also want it to be rare as the potential consequences of such a decision go well beyond the date of the abortion,” he said. “Education on contraception and family planning is better for Wyoming women than a decision they may later regret.”

Nonprofit pregnancy resource center Turning Point was unable to be reached for comment by press time.

Sheila Bush, executive director of the Wyoming Medical Association, said her board hadn’t formulated a position on the bills yet.

In 2018 a Senate bill to offer women who suffer miscarriages certificates of nonviable birth failed.

Two pro-life abortion bills passed the Wyoming Legislature in 2017. Now law, one requires physicians to offer women who want an abortion the opportunity to have an ultrasound and hear a heartbeat, if one can be heard. The other law prohibits the sale and transport of fetal tissue from aborted fetuses. Since selling fetal tissue is already illegal in the United States — although women can donate tissue for research — the state law didn’t change anything.

Dr. Brent Blue, the only Wyoming doctor who performs surgical abortions and makes that service publicly known, was against those bills when they became law and is against the newest batch, particularly House Bill 140, which introduces the word “viability” with no definition.

He’s worried that the sponsors are trying to sneak it in as a way of introducing more restrictions in the future.

“They’re both basically attempts at chipping away at a woman’s right to choose,” Blue said. “It’s classic anti-choice people trying to interfere with women’s health.

“This is the antithesis of the Republican doctrine of getting the government out of your life,” Blue said. “They’re trying to get the government in between a patient and a physician.”

He said the bills weren’t enforceable because there’s no database to check physicians’ reporting, or lack thereof, against.

“To report a noninfectious disease is absolutely nothing more than an attempt to restrict a woman’s right to choose her own destiny,” Blue said. “We don’t report vasectomies; we don’t report hysterectomies.”

Doctors do report things like cholera, influenza, tularemia and rabies, he said, but added: “There’s no public health significance whatsoever in reporting that a woman had a termination.”

Anthony agreed with Blue on the vague language surrounding viability.

“This is legislating gynecology and neonatology,” she said. “I think throwing these terms around is really irresponsible, and it completely ignores both the needs of the patient and the needs of her baby.”

This version of the article has added a word and a phrase to clarify what types of abortions the quoted physicians perform. — Ed.