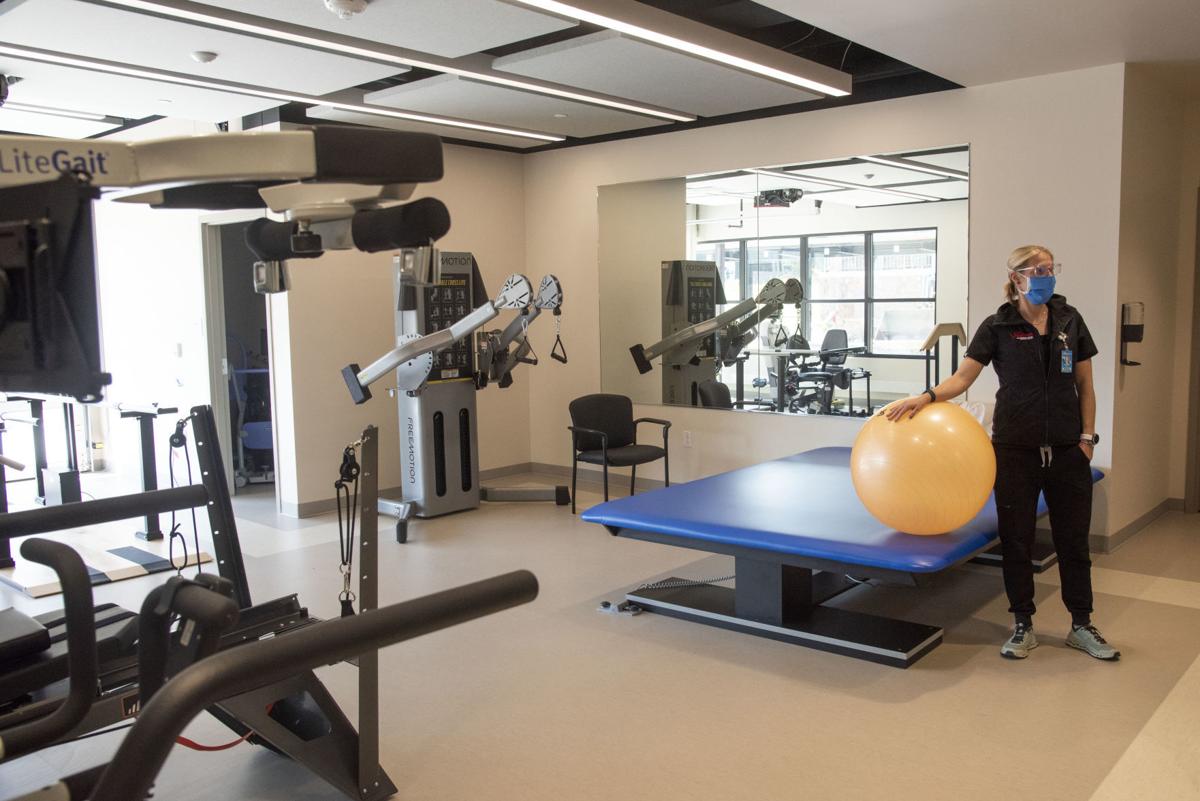 Dr. Ali Flis stands in the gym at the inpatient rehab facility. Some of the equipment would be found in a standard gym, but much of it is specialized for rehab. 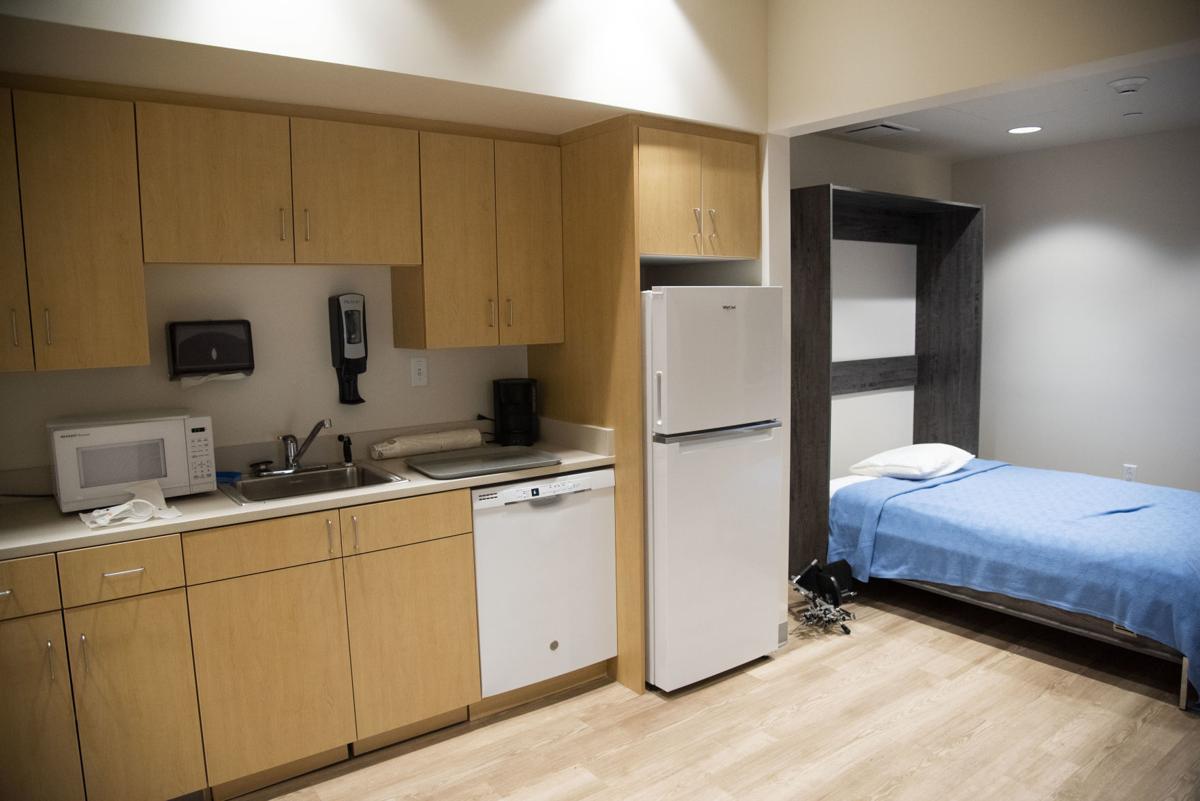 Patients have the opportunity to practice everyday tasks that test their motor skills, like washing dishes or baking, in this community kitchen. 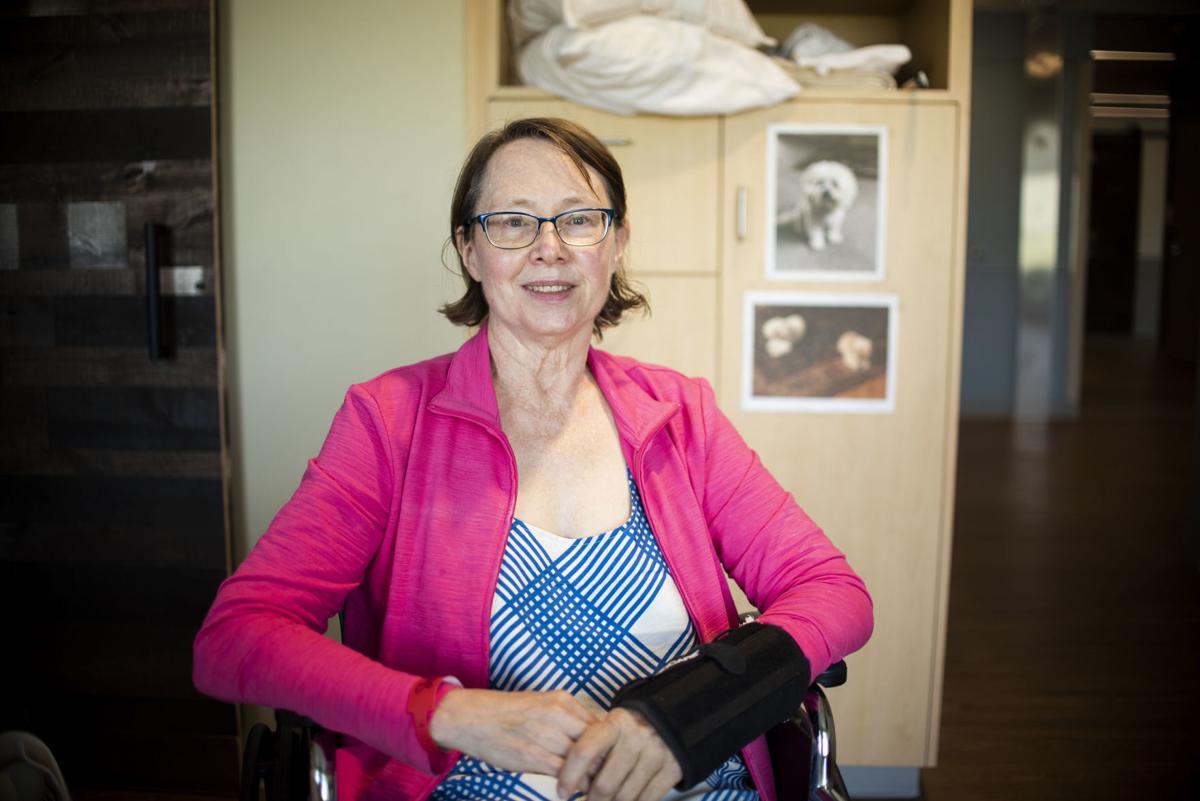 Anne Marie Resor, a patient at the St. John’s Health inpatient rehab facility, was thrown off of a horse at the beginning of summer. She was one of the facility’s first two patients. Her dog Albert is there in spirit.

Dr. Ali Flis stands in the gym at the inpatient rehab facility. Some of the equipment would be found in a standard gym, but much of it is specialized for rehab.

Patients have the opportunity to practice everyday tasks that test their motor skills, like washing dishes or baking, in this community kitchen.

Anne Marie Resor, a patient at the St. John’s Health inpatient rehab facility, was thrown off of a horse at the beginning of summer. She was one of the facility’s first two patients. Her dog Albert is there in spirit.

She was on a horseback ride a few weeks ago on her family’s Snake River Ranch, en route to see an eagle’s nest on the property. Resor has ridden for years, though “it’s not like I could do a dressage horse show,” she said, but that day she was on a newer animal she didn’t know well.

“Two of the horses spooked, and I fell off and my son fell off,” she said. “And I think in that fall, I may have broken my pelvis.”

Shaking off the pain, she got back on the horse.

“I had asked the wrangler if she would take a lead rope to make sure I was fine,” Resor said. “And within minutes I was thrown off the horse again.”

The second time there was no denying she was injured. She broke a cervical vertebrae, three ribs, her scapula, collarbone, wrist and part of her pelvis, and she punctured a lung.

With the help of an inflatable backboard, emergency responders got her off the ranch and to St. John’s Health, where doctors stabilized her injuries. In Resor’s only surgery, Dr. Gregory Thompson repaired her “mangled” wrist, but given the extent of her injuries, she couldn’t go home following her emergency care.

In the past Resor would have been transported to Salt Lake City or Idaho Falls to finish her in-patient rehab, an intensive process that includes several hours of therapy each day. Patients who need in-patient rehab often cannot perform daily tasks, so teams at the facilities help them learn to adapt to basic functions.

Instead, Resor was able to stay in Jackson for that care because St. John’s just opened its own inpatient rehab facility in the new Sage Living building. Though Sage Living isn’t yet complete, the rehab services are up and running, with Resor and one other patient christening the facility.

Opening such a facility is a big step for a hospital the size of St. John’s. Most comparable offerings are in large cities, with the closest being in Cheyenne, Salt Lake and Idaho Falls.

In-patient rehab is for patients who have acute needs that go beyond home health care. They might have neurological conditions like a stroke or, like Resor, polytrauma from an accident.

Flis is a faculty member at the University of Utah and oversees patient transfers from the acute side of the university’s hospital to the rehab side. She helped open an inpatient rehab facility in Salt Lake a year ago, then “jumped at” the chance to open one at St. John’s.

She’s in town as the facility opens to guide the interdisciplinary team, which includes a bevy of therapists, social workers and nurses. She’s helping them learn the daily routine before joining a rotating crew of university doctors who will take turns working weekly at St. John’s.

While Resor was in the facility, therapy started the instant she woke up.

The 16 rooms are like miniature hotel suites, with a TV, moveable bed and a bathroom. On the wall, Resor even kept a picture of her dog, Albert, named for his frizzy white mop that bears a resemblance to a certain German physicist.

First she’d have occupational therapy, which focuses on helping people develop real-world skills. The therapist helped her with getting out of bed, taking a shower and dressing, all of which can happen in her room.

Then the therapist helped with eating breakfast, either in her room or in the common eating area. Like most patients, she’d move right into a session of physical therapy, sometimes with a rest beforehand.

“I try to get a morning session in with most of the patients if they can handle it,” physical therapist Cara Sengebush said.

The facility has an array of high-tech gym equipment, some that is highly specific to rehab, like a body-weight assisted treadmill. A harness takes some of the weight off people’s legs, then the therapists help them walk, which is particularly crucial for patients with neurological problems whose brains may not remember basic everyday tasks.

“It’s not really functional walks, but the important part of that is just getting the repetition,” Sengebush said. “If someone had a stroke or an injury to their brain, we need to have them do that activity again and again and again, and that’s really how you build those recall neural pathways.”

Along with the treadmill, the facility has stimulation machines that send pulses of electricity into the sequence of muscles that move a particular part of the body. Therapists also have a machine that videotapes patients and helps identify ways in which their bodies are struggling to move or compensating.

For patients like Resor, more occupational therapy might follow physical rehab. The facility has a room that simulates the amenities of a house, including a full-size bed and a kitchen. Patients practice the skills they need for going home.

“What that looks like depends on what the patient’s goals are, what they want to do at home,” said Jen Chiappa, the hospital’s director of medical, surgical and rehabilitation services.

Resor used the kitchen to whip up a batch of brownies. With an oven, sink and dishwasher, she had all the things she needed — or so she thought.

Once she got the brownies together and the dishes washed — all part of her therapy — she discovered the oven didn’t work. With the larger Sage Living building still being under construction, there are kinks to work out, and the oven wouldn’t kick on due to an electrical issue. So while Resor returned to her room, the brownies were whisked away to the Living Center to be baked.

All that therapy, at least three hours but sometimes more, might sound exhausting, but patients with such acute needs require a variety of skills to go home. They need strengthening as well as tools to navigate their new reality, which for Resor might only persist until she heals but could be lifelong for a stroke patient.

Resor didn’t think it was too bad.

“In your mind, you’re going, ‘Three hours of therapy, how would I be able to do that?’” she said. “But you know, the therapy has been great.”

As Resor waited for her brownies to be baked and returned, she visited with her nephew, Miller Resor, as the grass waved in the wind on the National Elk Refuge out her window. They traded jokes and stories, then her nephew hugged her as he left.

To Flis, the medical director, those moments are the biggest benefit of having an in-patient rehab facility in Jackson. The level of care it provides was already available in the region, but there’s a difference between sending your family member to East Jackson or a facility in Salt Lake City.

“Do you want them to stay there for six weeks? Or stay in EIRMC for six weeks?” Flis said. “Or can they come here and be closer to family and friends and a supportive environment?”

Since the goal of the rehab facility is to prepare patients for going home, having family in town helps that process, Flis said. When patients leave, they aren’t cured, just well enough to go home. Often they have home health professionals coming for therapy, but their family members are the ones helping them with daily life.

Because the facility is in town, family members can learn the tools their loved ones need to put clothes on or the activities they might find difficult, like getting out of bed. That’s why in addition to all the staff who help with the various types of rehab, social workers are part of the team, too.

Resor said she was happy to spend a couple of weeks in the rehab facility because it allowed her time to heal and for the team to build a plan. That’s going to help her family navigate her summer of healing.

“The better I am when I get home,” she said, “the easier it’s going to be for everyone to help me because I’m going to still need help.”