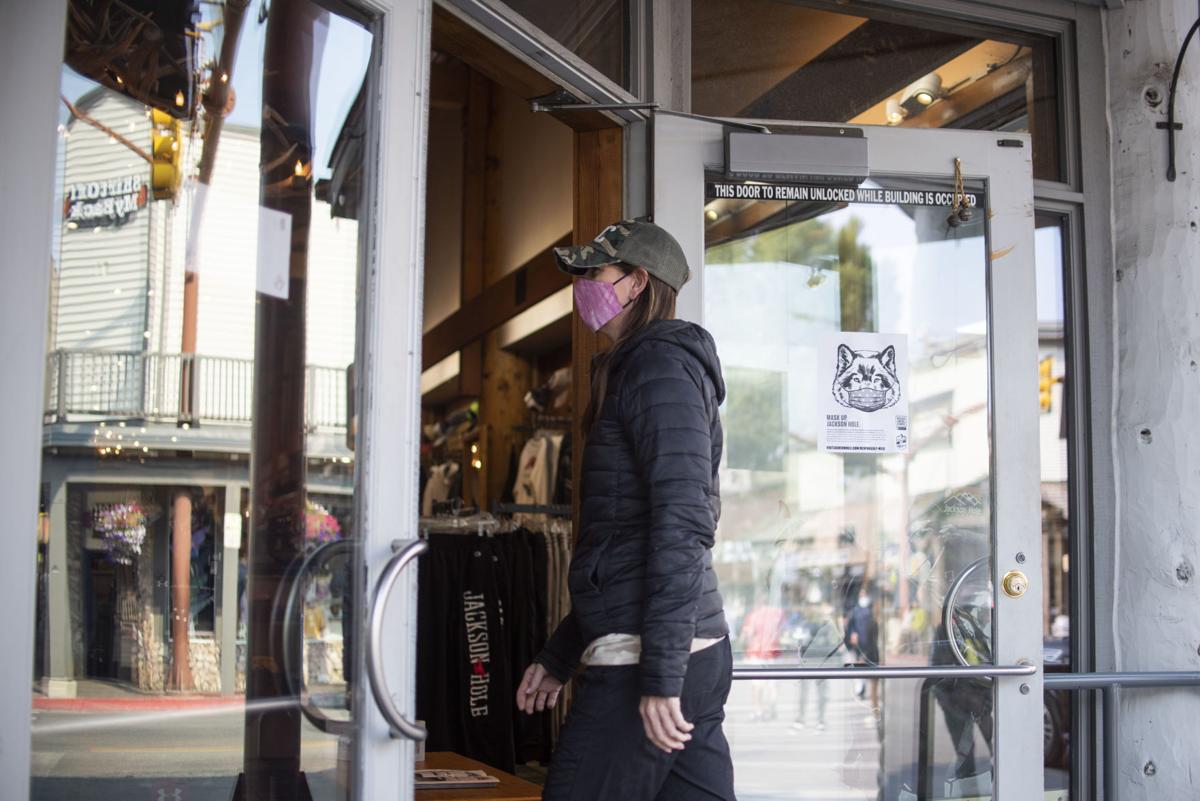 A masked customer walks in Lee’s Tees in Town Square Monday. The Teton County Board of County Commissioners voted Thursday to extend Teton District Health Officer Travis Riddell's mask mandate through Dec. 31, with a condition that it be lifted if the county's COVID-19 risk level drops into lower levels.

The move followed an identical, unanimous Monday vote from the Jackson Town Council, so all of Teton County is now subject to the same masking requirements.

The seals of approval, necessitated by recent changes to state law, generally mean mask wearing is required in Jackson Hole through Dec. 31, with some exceptions, or until the valley’s COVID-19 risk level drops to “low” or “moderate,” when the order should be lifted.

Board Chairwoman Natalia D. Macker and Commissioners Mark Newcomb and Luther Propst voted for the mandate as a tool to combat rising COVID-19 levels in Jackson Hole.

“I hear our health professionals asking to deploy a tool that is not the single cure-all, but is part of the tools in the toolbox,” Macker said. “I support giving them that tool and giving the community that tool and hope that we see our numbers go down.”

The approval is in line with recommendations from the Teton District Board of Health.

Riddell first instituted a mask mandate on Aug. 26, responding to increasing COVID-19 case levels. Teton County is at the “red,” or high, risk level according to the Centers for Disease Control and Prevention.

When the Board of Health reviewed the order, it recommended that the council and county board extend the requirement through Dec. 31.

It also recommended the elected boards tack on a condition stating that the order be lifted if COVID-19 risk levels decrease below “moderate,” according to the CDC. And, if risk levels climb again, that it goes back into place.

The town and county both extended the mandate with that condition included.

But unlike the council, which voted 4-0 in favor, with Councilor Jim Rooks absent, county commissioners were not a monolith in their decision-making.

Over 600 people wrote public comments about the mandate, and an earlier read of the letters showed roughly 350 people in favor and 248 opposed.

Barron said Thursday that the people who had written him were split roughly down the middle, and he argued that people could make decisions about mask wearing without government involvement.

“I believe in masks, I wear masks,” Barron said. “Before the most recent mandate, I started wearing masks in most public settings and observed that most of the public was doing the same thing. I trust the public will make the right decisions and choices for themselves and others. And I trust that the public thinks beyond their own viewshed — they think of other people.”

While asking questions about the “risks of wearing masks” — health officials said evidence doesn’t support those concerns — Epstein fretted about the order’s length and inclusion of schools, as well as the Teton County Health Department’s decision to change how it measures COVID-19 risk.

Director of Health Jodie Pond said switching from the county’s methodology to the Centers for Disease Control and Prevention’s was done to better highlight the risk of transmission in Teton County.

Epstein felt Teton County School District No. 1 should make its own decisions about masks.

The Teton County School District No. 1 Board of Trustees imposed a mask mandate on Aug. 26. Deputy County Attorney Keith Gingery, also the school board chairman, said Riddell included schools in the order so that private schools would fall under its umbrella.

“I look carefully and I have others in the hospital who look carefully at the world literature, and there have not been really any excellent studies on the long-term psychological effects of masking,” Beaupre told commissioners.

“I don’t think there is data to support that masking is detrimental to your health,” Pond told the Jackson Hole Daily.

“One of the things that’s difficult is we’ll get public comment and some of the references are not scientific, aren’t considered credible in the scientific community,” she said.

But, Pond said, “if people have studies they want to send us, we will read them and then make a determination if there’s something there.”

Two people dialed into the Zoom meeting Thursday to oppose the mandate.

Gloria Courser was one, and she asked commissioners to vote the measure down. She felt that it was unenforceable and that, while people would likely comply with the mandate in public, they would continue to gather in private without masks.

The mask order allows people to claim an exemption if they have a “medical condition, mental health condition, or disability” that would prevent them from donning a face covering.

Pond said Thursday that people will not be asked for documentation to qualify for any sort of exemption, mirroring language in the order.

Commissioner Mark Newcomb said he had read studies and respected the time other people had taken to do so and write electeds about their concerns. He thought the mandate would provide a “small layer” of additional protection against COVID-19.

“While I’m going to vote in favor of extending this ordinance, I really hope that it won’t be long before we drop down ... into a level where the mandate will not be effective, where we won’t need it,” Newcomb said.

In the meantime, he asked people to interpret the order as a “humble” request to wear masks in crowded indoor settings and when they’re around people susceptible to COVID-19 infection.

Why COVID-19 metrics are changing

When Commissioner Greg Epstein asked Director of Health Jodie Pond about her department's decision to change how it monitored risk from COVID-19, Pond said her department didn’t take the decision to switch  “lightly” and had met about it for a month before deciding.

Setting up a color-coded risk monitor for Teton County last summer, Pond said health officials aligned themselves with a model developed by Harvard because federal and state agencies hadn’t developed their own.

That model took into account a variety of factors, including hospital capacity, availability of personal protective equipment, community spread and number of cases, among others. Because the pandemic had so many risk factors at the time, Pond said, the metrics were expansive. And, if the health system’s capacity was low, it could elevate risk even if cases were low, because providers were less able to respond.

But Pond previously told the Daily that capacity has increased in the valley and that viral transmission and case rates have become the main source of community risk.

So her staff decided to switch to the CDC scale, which takes into account transmission rates and the rate of positive tests. Pond said previously that better matches Teton County’s current situation.

She told commissioners Thursday that when the delta variant started spreading, the department evaluated its system and found capacity metrics kept the county from leaving the "green," or low risk level.

“Artificially it was keeping us in a low or moderate level and not telling the story about how much COVID we had,” Pond said.

She said her department looked at the Wyoming Department of Health and CDC’s metrics, and went with the latter because it's straightforward.

Pond said earlier in the meeting that the COVID-19 response has been “hard” and “long,” and conditions are changing.

“The science does change and delta has changed things,” she said. “That was a big factor for us: delta being so much more infectious, and really trying to line up what the CDC and the state was saying about our risk level as opposed to how much PPE we have in our basement.”

The “small layer” of additional protection against COVID-19 is not worth the government overreach of dictating we cover our faces. Let people make their own decisions.

Our elected councils talk a big game about what

they claim to know about “science,” but neither has

ever presented a lick of actual evidence to support

the notion that jabbing people with “Operation Warp Speed”

needles is doing anything other than destroying people’s

We are not mice, we are humans. Please respect our lives.

Immunology is a complex system. If you are going to insist

at least get data first!