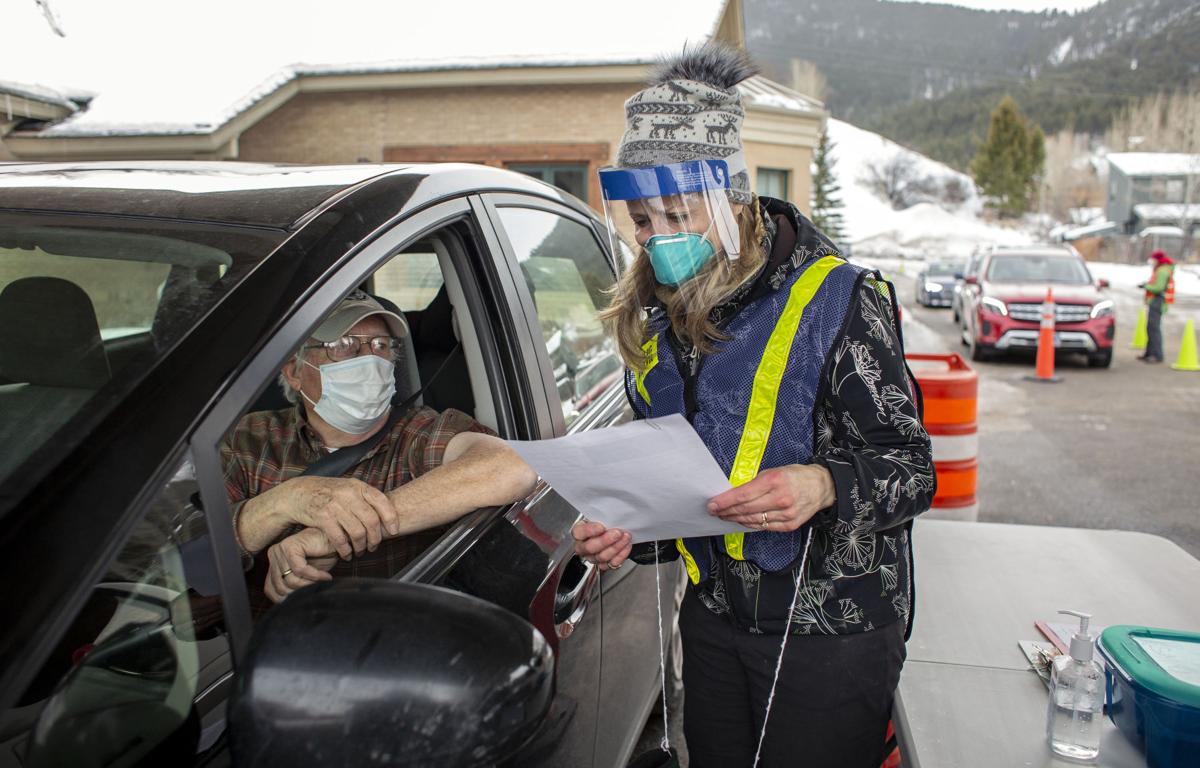 Teton County Health Department registered nurse Sandra Goodson prepares to give David Dornan the vaccine for COVID-19 during a drive-thru clinic at the Senior Center of Jackson Hole on Thursday. One hundred thirty doses of the vaccine were set to be administered throughout the day. This week, the Health Department is vaccinating residents who are 75 and above, and they hope to move on to those 70 and above next week. 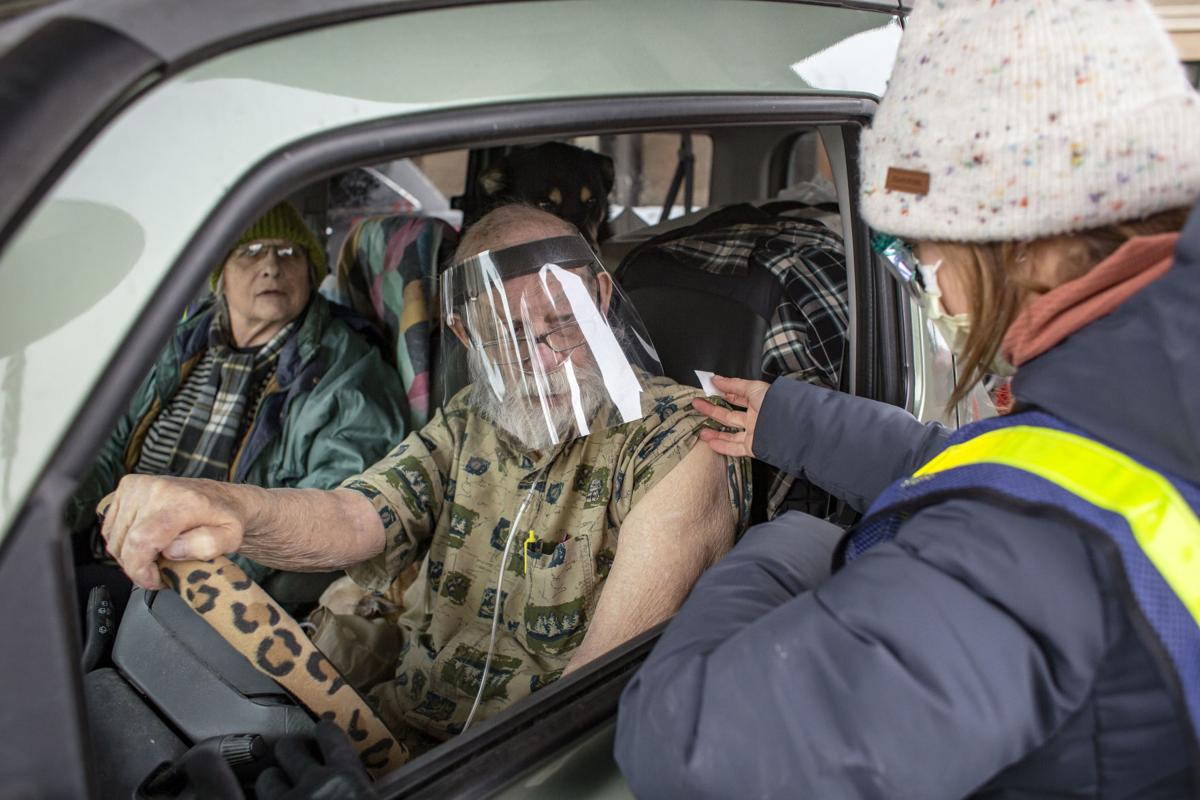 Teton County Health Department registered nurse Hannah Kertesz lifts up John David Cook’s sleeve to give him the vaccine for COVID-19 during a drive-thru clinic at the Senior Center of Jackson Hole on January 21. One hundred thirty doses of the vaccine were set to be administered throughout the day.

Teton County Health Department registered nurse Sandra Goodson prepares to give David Dornan the vaccine for COVID-19 during a drive-thru clinic at the Senior Center of Jackson Hole on Thursday. One hundred thirty doses of the vaccine were set to be administered throughout the day. This week, the Health Department is vaccinating residents who are 75 and above, and they hope to move on to those 70 and above next week.

Teton County Health Department registered nurse Hannah Kertesz lifts up John David Cook’s sleeve to give him the vaccine for COVID-19 during a drive-thru clinic at the Senior Center of Jackson Hole on January 21. One hundred thirty doses of the vaccine were set to be administered throughout the day.

On Monday, newly elected Town Councilor Jessica Sell Chambers said she wanted to see a stronger government response to the coronavirus. On Tuesday she got her wish.

State health officials approved tighter restrictions for Teton County that are meant to beat back a record-breaking surge of cases. The new restrictions mirror the ones in place statewide in early December.

Bars and restaurants must close between 10 p.m. and 5 a.m. Gatherings have been capped at 10 people or 25% of capacity for indoor events and 50% of capacity or 250 people for outdoor ones, as long as social distancing and other measures are followed.

Alongside the rule-making, Chambers said she wants elected officials to use their position to convey the severity of the local situation.

“The thing that we are not doing is leveraging our voices,” Chambers said Monday.

The newly sworn-in councilor wanted to have a special meeting Friday at which the council and mayor could have discussed the recent increase in community risk level to critical and the presence of the new viral variant. That meeting didn’t happen, though the variant and the new risk level were prevalent topics at Friday’s community update.

Despite being the ninth most populous county in Wyoming, Teton County had the highest number of active COVID-19 cases, 257, on Tuesday afternoon. Health officials have said that is in part due to a variant strain, first identified in the U.K., which research suggests can be up to 50% to 70% more transmissible.

At the state level, cases have been declining. A database maintained by The New York Times shows that cases have decreased dramatically from the late November records the state set. In the past week, the seven-day average number of daily new cases has dropped 37% to 193 a day.

That has led state officials to loosen public health restrictions. As of Tuesday the limits on gatherings had been increased to 25% of capacity or 250 people for indoor events and 500 people for outdoor events.

“Wyoming is making progress and coming closer to safely returning to more normal lives, and the steps we have taken are helping us achieve this,” Gov. Mark Gordon said in a statement. “I am confident that as our vaccination rate increases, the data-driven approach we are taking and our improving circumstances will give us more opportunity to further relax our orders.”

Meanwhile, Teton County’s COVID-19 numbers are much higher than the state’s. The state Health Department reported a sixth Teton County death, a man who died within the past week. He had been hospitalized, the department said in a press release. The state did not disclose his age, describing him as “an older adult,” who had health conditions that put him at risk of serious illness from the disease.

That equates to an average of 33 new cases a day. At Friday’s update Riddell said local contact tracers and case investigators had a backlog of about 150 cases. That means individuals who were close contacts to someone who tested positive are not being alerted to that exposure in a timely fashion and are thus unlikely to know they should quarantine.

To catch up, Teton County is enlisting a contractor to help with contact tracing.

“While we would strongly prefer to keep this process local, the bottom line is we’re completely overwhelmed, and timely investigation and notification of those close contacts is really critical,” Riddell said Friday.

In announcing the changes to state health orders, Gordon’s office said counties can ask for variances to the orders, which Riddell did Friday. He hopes the changes will be the catalyst for a decrease in cases, though he said much of the recent spread can be attributed to private gatherings, which are covered under the order but harder to enforce.

That’s why the recommendation to not gather outside your household is still really important, he said Tuesday.

“Obviously that’s more restrictive than anything that we’ve been able to codify in these orders,” Riddell said.

State officials don’t appear to have much “appetite” for allowing Teton County to enact another stay-at-home order, he said, because of concerns over individual liberty. Restrictions on bars and restaurants that mandate to-go orders only could be on the table should the recent surge get worse.

Outside of Riddell, local officials can only do so much. The Teton County Board of County Commissioners has little it can do to mandate health restrictions, as Riddell is the appointed person in charge of health orders and recommendations.

The Town Council can legislate only on the actions of people and businesses within town limits, so the scope of any action it takes would be narrow. Because of the limits on both governing bodies, Chambers said, elected officials needed to at least be trumpeting a message of personal responsibility and community goodwill.

She decried what she sees as “playground logic,” the idea that if one thing that seems risky is happening in the community, that gives permission for other risky behaviors.

“We need people to not point fingers at others as an excuse not to do the right, safe and healthy thing,” she said. “At the end of the day, people need to ask themselves, ‘What’s the cost of a life?’”

The way she sees it, that might require some tough conversations.