In this panorama of multiple images, ninth District Court Judge Timothy Day convenes a sentencing hearing via video conference in an empty courtroom Tuesday morning at the Teton County Courthouse. The courthouse has been locked since March 24 due to the novel coronavirus. Health guidelines have forced all levels of U.S. courts to move their business online. 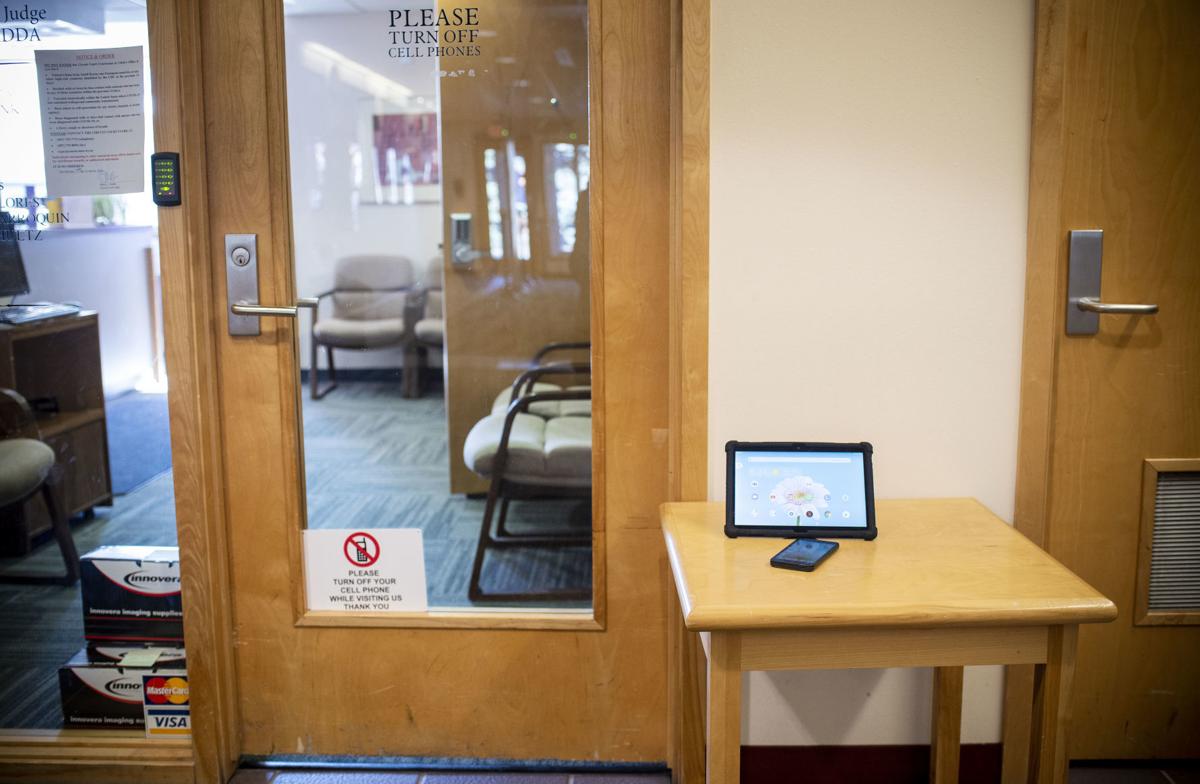 The Teton County Courthouse has two devices — and iPhone and an iPad — people can use to access their online court hearings. 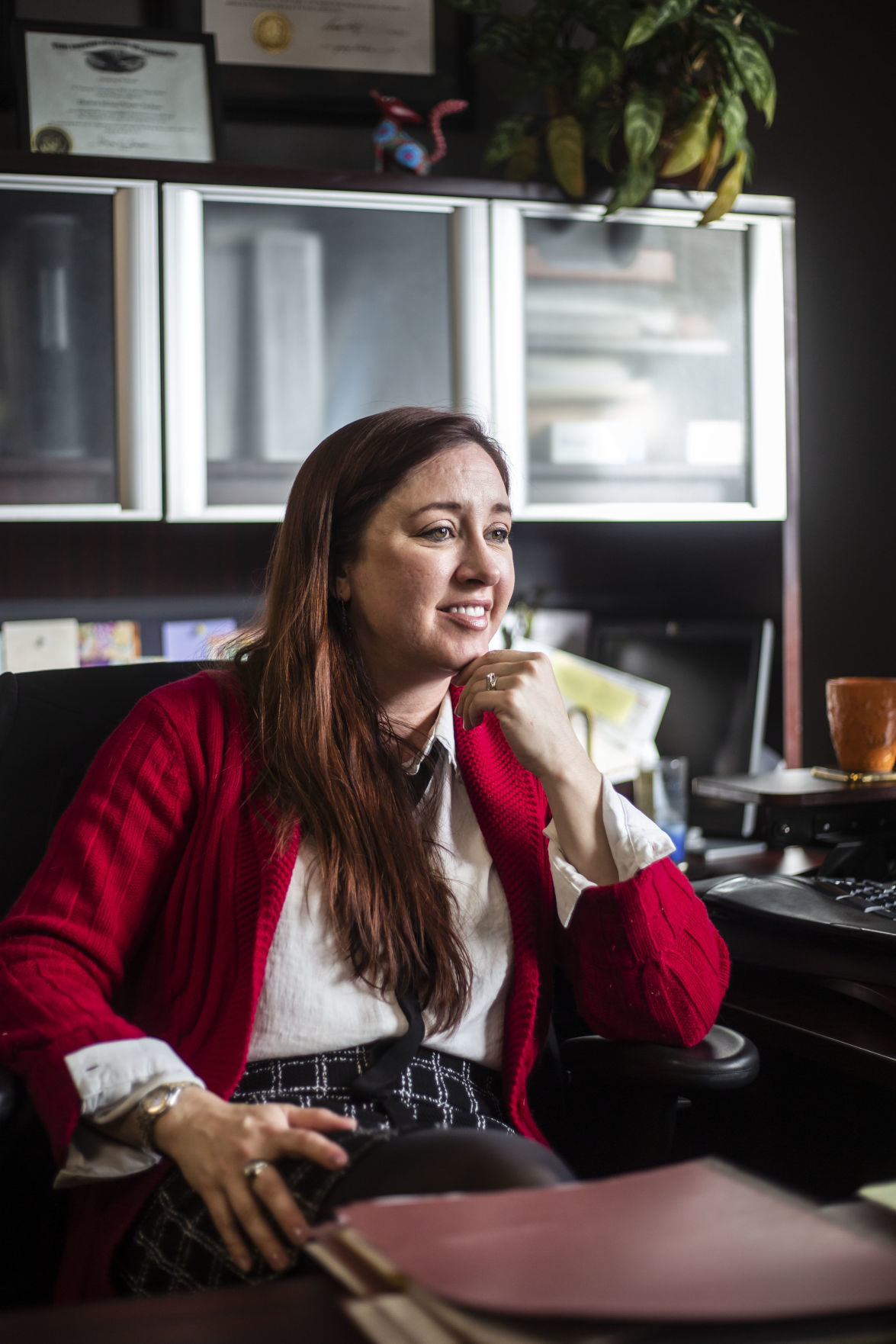 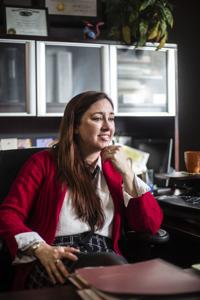 Senior Assistant Public Defender and Jackson-based attorney Elisabeth Trefonas said some of her clients do not have a smart device or internet access that allows them to connect to video software the court has been using for online hearings. 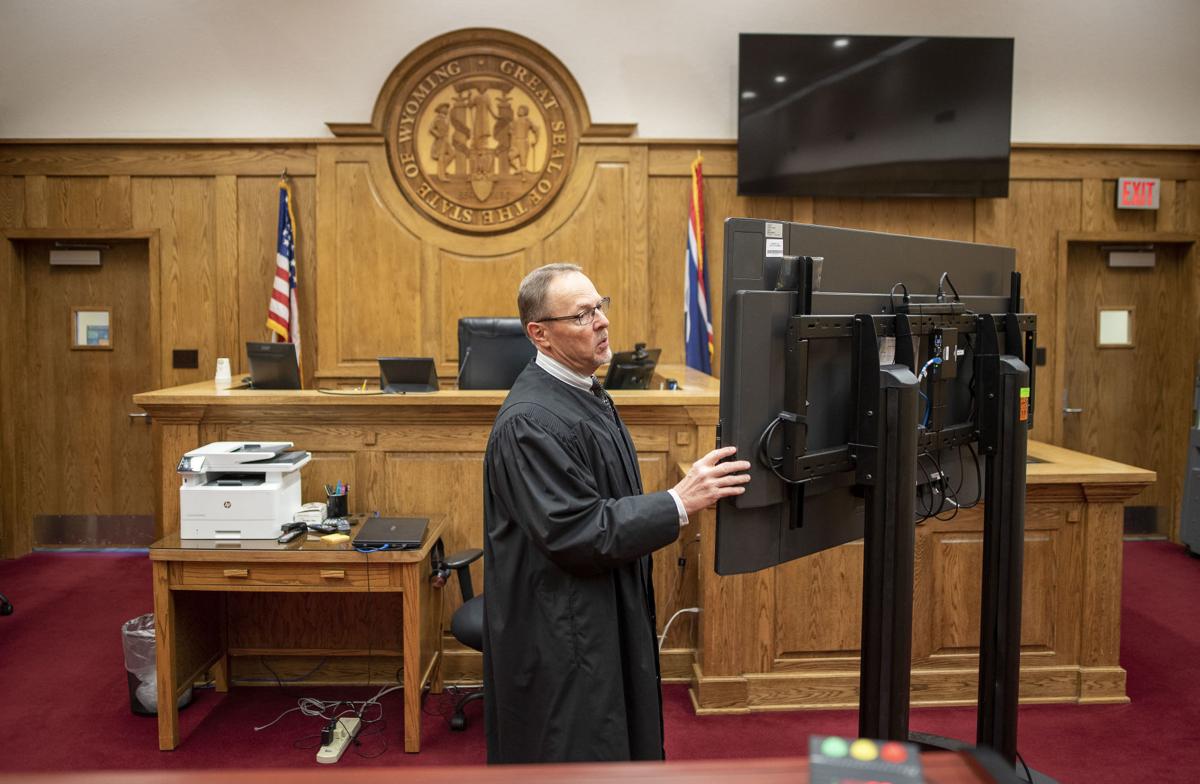 Judge Timothy Day sat alone in the 9th Judicial District courtroom Tuesday morning as he prepared for a criminal sentencing.

That’s the norm these days, just Day and his computer in a big empty courtroom.

Pre-coronavirus, during a felony sentencing Day would have a clerk to his right, bailiff to his left, court reporter in front of him and attorneys, defendants, victims and spectators scattered throughout the gallery.

“All the video stuff I do from court with my robe on,” Day told the News&Guide in a video interview. “It’s just me.”

The Teton County Courthouse is locked and has been since March 24, the day before community spread of COVID-19 was confirmed in Teton County.

Health guidelines have forced all levels of U.S. courts to move their business online, a challenging evolution for the justice system that still heavily depends on in-person proceedings and paper filings.

The new online model isn’t without challenges, but it’s allowing the wheels of justice to continue turning.

“It is more important than ever during this that people have confidence the justice system is still working,” Day said. “Their rights are being protected, the rule of law is still being followed and it is important we continue to do as many hearings as we can.”

“Our state IT division has most of us set up with capable technology,” Day said. “It’s one of the most secure video platforms available. People can feel like they aren’t going to get hacked.”

Court orders are also allowing attorneys to e-file pertinent documents so they can meet filing deadlines and represent clients remotely.

“It has prevented people from having to make unnecessary trips to the courthouse,” Day said.

Court hearings going digital means anyone who’s due before a judge has to have access to the internet and a smart device that allows them to connect to the video software, which isn’t the case for everyone.

“Some of our clients don’t have tablets or smart devices,” Senior Assistant Public Defender and Jackson-based attorney Elisabeth Trefonas said.

Trefonas said in the first few weeks of online hearings she would suggest a client borrow someone’s device and use WiFi from outside McDonalds or the library, but connectivity is a problem.

Judges are being lenient if a defendant can’t virtually appear, usually continuing a proceeding until they can borrow a computer from a friend or neighbor.

“We have purchased a tablet and set up a hotspot in the lobby of the courthouse,” Day said. “It allows people to connect here.”

The tablet is sanitized before and after use and is not handed directly to anyone to abide by physical distancing, head of court security Teton County Sheriff’s Corporal Mike Crook said.

“We have a procedure,” Crook said. “We set it outside for them and we sanitize it down each time.”

Trefonas, who’s been working from home, said she’s been logging into hearings early to make sure her clients’ audio and video is working and that they know how to mute and unmute their microphones.

Another issue Trefonas is running into as the public defender is trying to reach clients whose phones have been disconnected because they’ve lost jobs and are struggling financially.

“The first bill they aren’t paying is their cell phone bill,” Trefonas said. “So we send a letter and hope the mail is still being picked up. But they may not be paying their P.O. box either.”

When you apply for the public defender you’re asked to provide your phone number and mailing address, not your email address.

“We have had the experience where a client needs to appear by video and we don’t have an email for them,” Trefonas said.

Trefonas said she and her staff can sometimes reach clients by sleuthing on social media. It’s no guarantee, but they’re trying everything they can to avoid bench warrants being issued.

To not be constantly meeting with clients in person, either at the office or at the Teton County Jail, is a new way of doing business for most attorneys.

“I took for granted how accessible a public building really is,” Trefonas said, “as far as government for the masses, to walk in and pay your bill with cash and show up and wave at the judge in person.”

Defense Attorney Dick Stout, who has been practicing law from his backyard just outside Jackson, said he misses walking to the courthouse from his downtown office, making small talk with whoever is there that day and filing paperwork.

But he also feels like doing business online has made some things easier.

“The filing is streamlined,” Stout said. “We are getting discovery from the prosecutors via email. I’m realizing how much more efficient we can be.”

Stout has appeared by video conference for a handful of change of plea hearings.

“Nothing is different than it would have been otherwise,” he said. “If you’re going to have a jury trial that isn’t possible right now but for so many things it’s doable.”

Teton County District Court has also figured out a way to use an interpreter for Spanish speaking defendants that doesn’t require two people to talk over each other on a video chat.

“[The interpreter] calls the individual who needs the translation who is appearing on video,” Day said. “She can in real time translate without us hearing anything.”

Members of the public who need access to documents or court information are more at the mercy of the clerks because Wyoming has no online court records system.

The district court is posting the public court docket online. The circuit court is taping its public docket and other notices to the front doors of the courthouse.

Both local judges have prioritized public access to online hearings.

“As you know, Wyoming’s district courts are open to the public, inclusive of the media, for all proceedings that are not deemed confidential by law,” Day wrote in a letter to the News&Guide in March. “It is important that those proceedings remain open to the public and to you despite significant changes in court operations during the pandemic should you or anyone else want to attend.”

Anyone can email a request to attend an online hearing and they’ll be given a link or a conference line to call.

A virtual gallery logs on

Earlier this month the circuit court pulled off a criminal sentencing with more than 30 people in online attendance, proving the court can host larger high interest proceedings during the pandemic.

There was testimony during that hearing but no evidence presentations.

“The biggest trick so far with no solution is how to streamline the presentation of evidence during a video hearing,” Day said. “We have been able to do it on a limited basis, but it is difficult if it’s going to be more than an hour or two hearing. The [Microsoft] Teams platform we have allows a lawyer to share their screen to everyone on the call so they can share an exhibit.”

Digital court hearings are working for the most part but there’s more uncertainty as the courts look to the future.

“If this persists into the summer there will be more serious questions about speedy trials in criminal cases and how we will handle that,” Day told the Teton County Board of County Commissioners during a Monday morning meeting.

“I would be very surprised if we can hold jury trials in June,” Day said.

The court has options available to continue trials beyond their speedy trial deadlines if the reasons meet certain requirements.

Day said in the meantime it’s most important for the people of Teton County to know their local justice system is still doing business as best it can.

“We want to keep people confident that the justice system is working and we are doing as many hearings as possible and they will have their day in court,” Day said. “There is still transparency and we are trying as hard as we can to get better at that.”