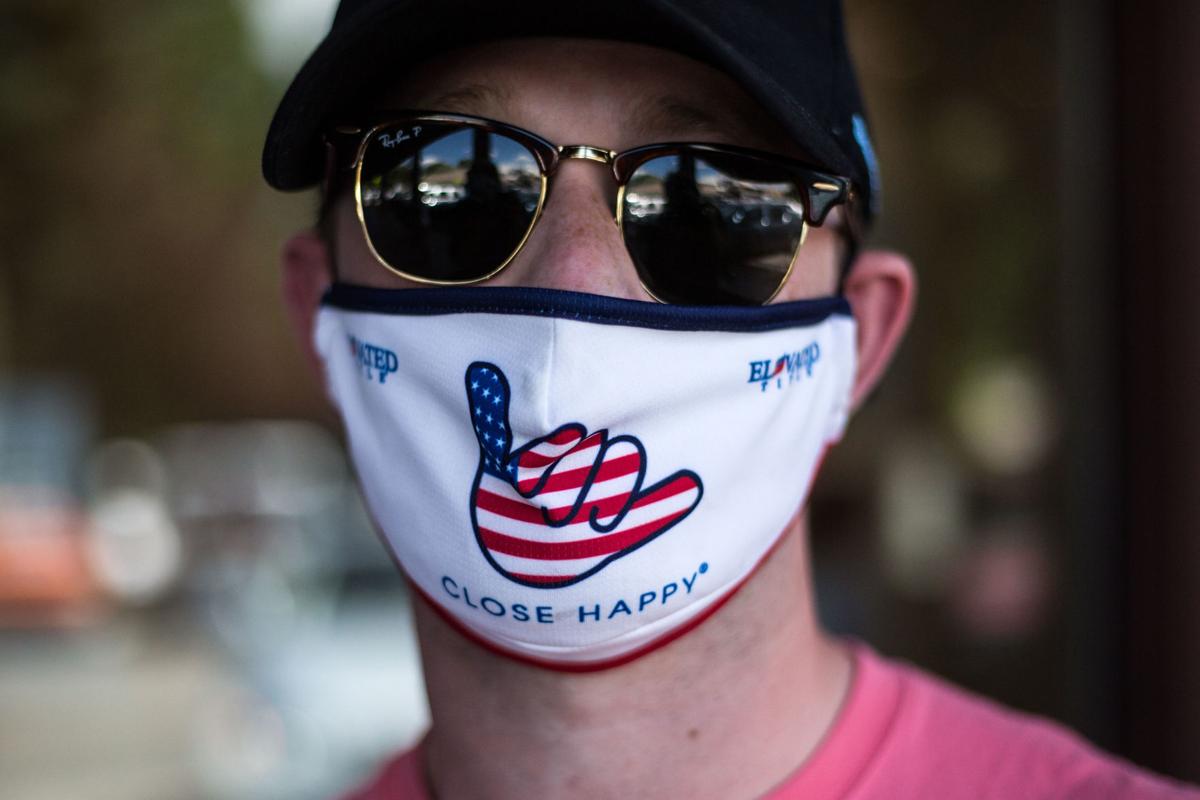 Nicholas Ogden, visiting from Draper, Utah, shows off his mask July 20 on the Town Square in Jackson. 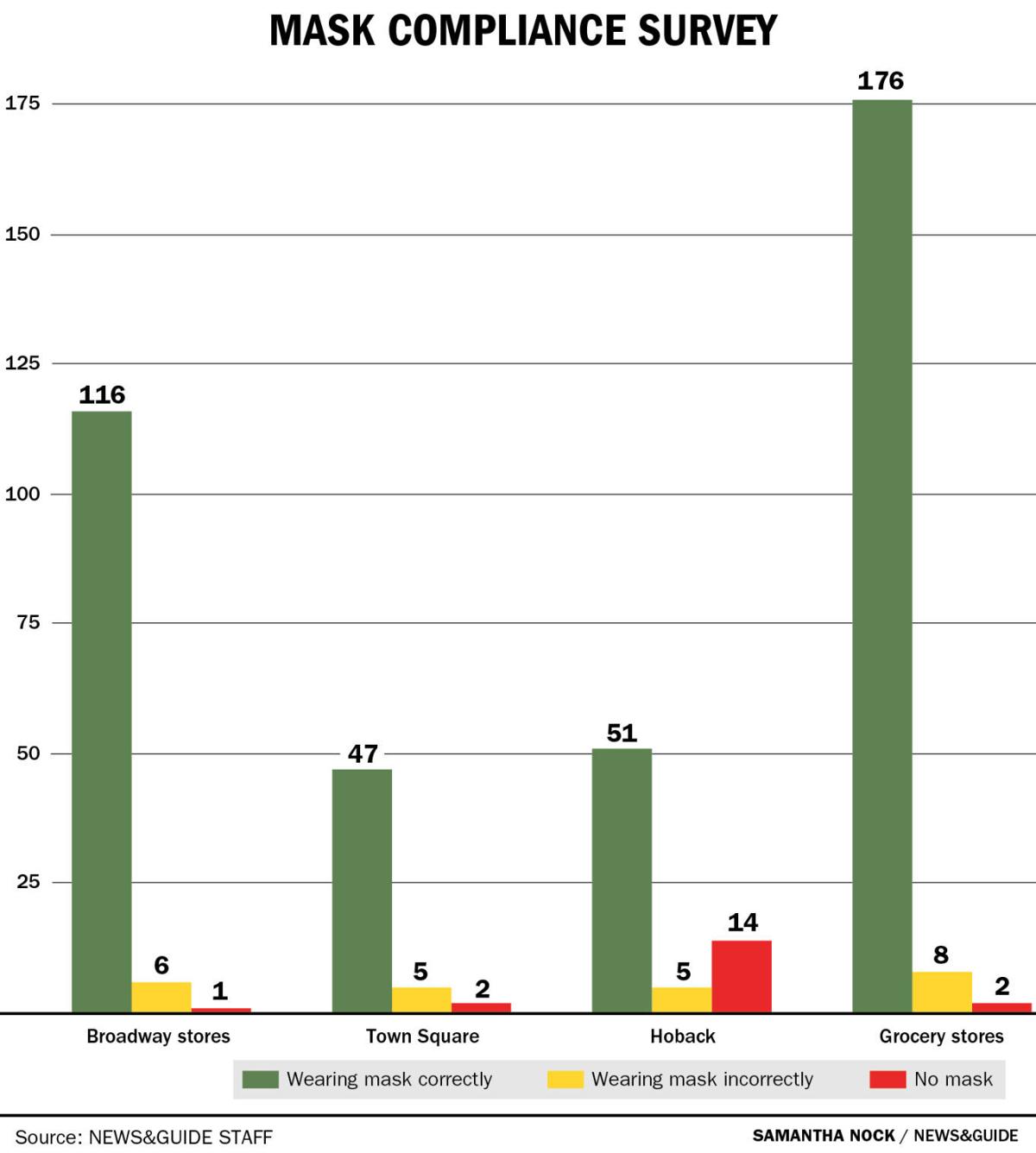 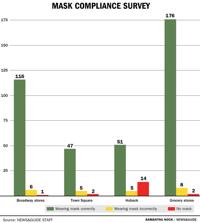 Nicholas Ogden, visiting from Draper, Utah, shows off his mask July 20 on the Town Square in Jackson.

If Teton County residents were graded on wearing masks, they’d get an A.

In late November, before the expanded mask order went into effect, 9 out of 10 people in retail businesses covered by the order wore face coverings, according to a recent survey by News&Guide staff.

“That sounds about right,” Teton County Director of Health Jodie Pond said. “I mean, I don’t go to many places. My main outings include the grocery store and that’s about it, but that seems right to me.”

“A lot has been done, but I think it’s pretty clear that more needs to be done here,” Mayor Pete Muldoon said at a Dec. 4 special meeting. “I do think it’s our responsibility to make those kinds of policy decisions. We are not getting the compliance that these public health orders deserve.”

The Teton County Health Department has received a wide range of complaints about customers and employees of businesses not following the mask order, but the News&Guide’s survey found strong overall compliance.

Another 24 people (5.54%) had face coverings but wore them incorrectly, either down on their chins or only covering their mouths. Just 19 (4.39%) had no mask at all, and several were employees of businesses.

Teton County’s numbers track with Salt Lake County in Utah, which conducts regular surveys and has generally found compliance rates above 90%. David Schuld, who directs the county’s COVID-19 taskforce, told the News&Guide over the summer that in surveys soon after the mask order was enacted the compliance rate was no lower than 88%.

“We’re making sure that we are continuing and strengthening our outreach on why it’s important to properly wear face coverings,” Schuld said about the communities with the lowest rates.

The Teton County Health Department doesn’t have the resources to conduct compliance surveys, Pond said, noting that the Salt Lake County health department is much larger. The information would be helpful, but with her limited staff she’d rather focus on contact tracing.

With compliance at 90%, Pond said, the original order seems to have worked well without law enforcement needing to issue citations. Interim Police Chief Michelle Weber, whose department was asked to step up enforcement, sees closing the gap on the 5% of people who don’t carry masks as an outreach issue.

“People are really receptive to education,” she said. “When you talk to them about why we want to wear masks so that businesses can stay open, they better understand it.”

Since that Dec. 4 meeting her department has performed 50 business checks for compliance, with a handful of those being in response to a complaint. Since the order went into effect her officers have done close to 1,800 checks.

“In general, I’m not a big fan of using law enforcement in that way,” she said. “I hope that people can understand that we’re asking you to do this for the greater good of the community.”

The compliance numbers may have changed since Dec. 1, when the new mask order went into effect. It basically covers “everything outside your house,” Pond said, so workspaces like offices are now covered.

That makes compliance even harder to track because it covers private areas in businesses, but that change should be helpful in continuing the downward trend the county has been seeing in the past few weeks. Previously, Pond said, contact tracers were finding many cases in smaller settings where people felt comfortable without masks, including offices.

While the revised order doesn’t cover dinner parties and other household gatherings, Pond thinks the changes are helping tamp down spread. She also thinks health officials’ hammering home of the message to only interact indoors with your household is making a difference.

If Teton County residents can continue their level of compliance with the newest order and stay vigilant until communitywide vaccination comes to fruition, Pond sees a brighter future.

“Just keep doing those things so that you know we can make it through the spring when most of the population can get vaccinated,” she said. “Then we can all have Christmas together, and then we can go to weddings and birthdays and anniversary celebrations — all the things we all want to do again.”