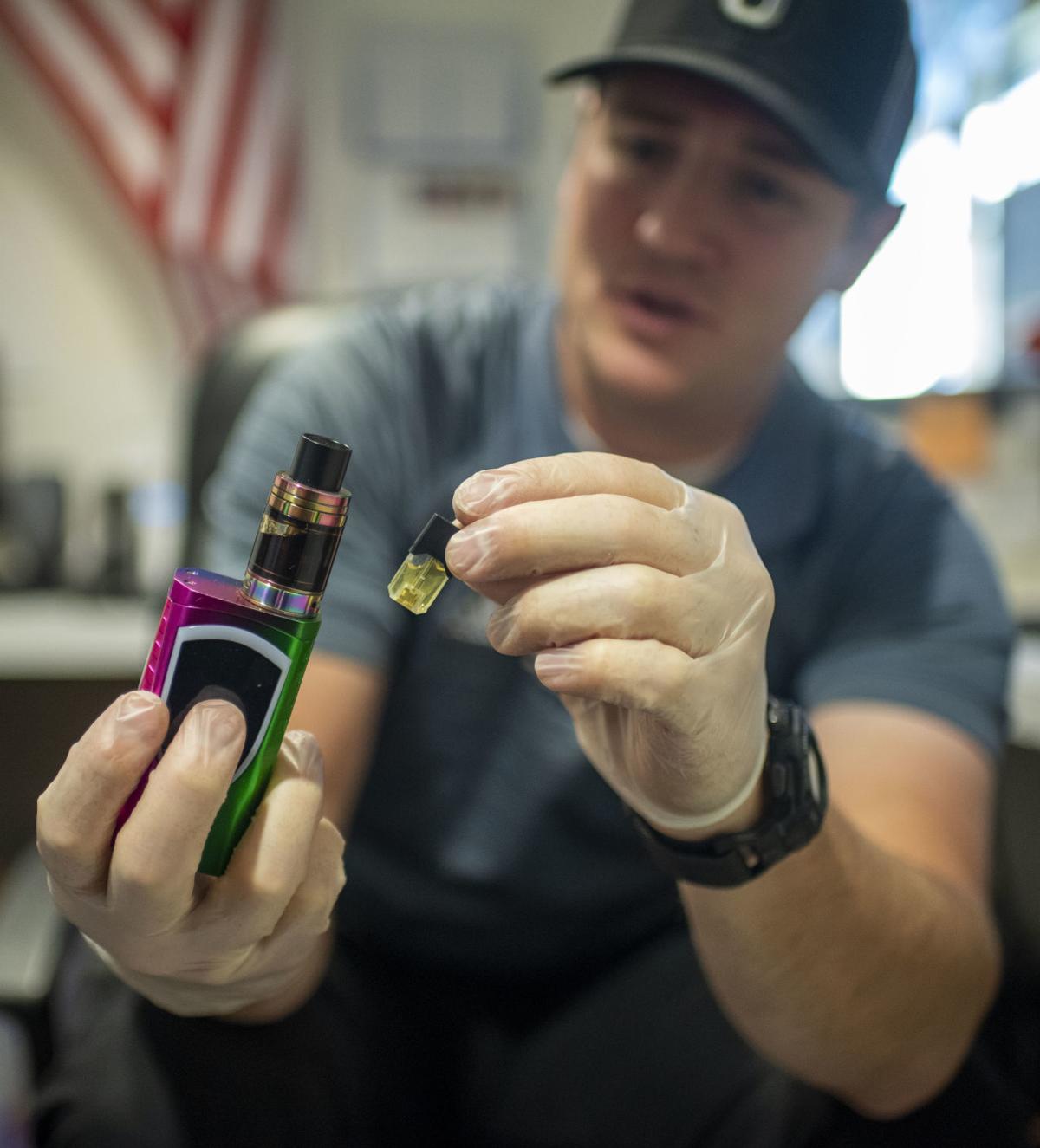 Though most of the vape pens conficated at Jackson Hole High School are simple and basic, Teton County Sheriff’s Deputy Andrew Roundy has caught kids with larger devices, called “vape mods,” which are more expensive and enhanced — or modified, hence the “mod” name — to include certain advanced features. 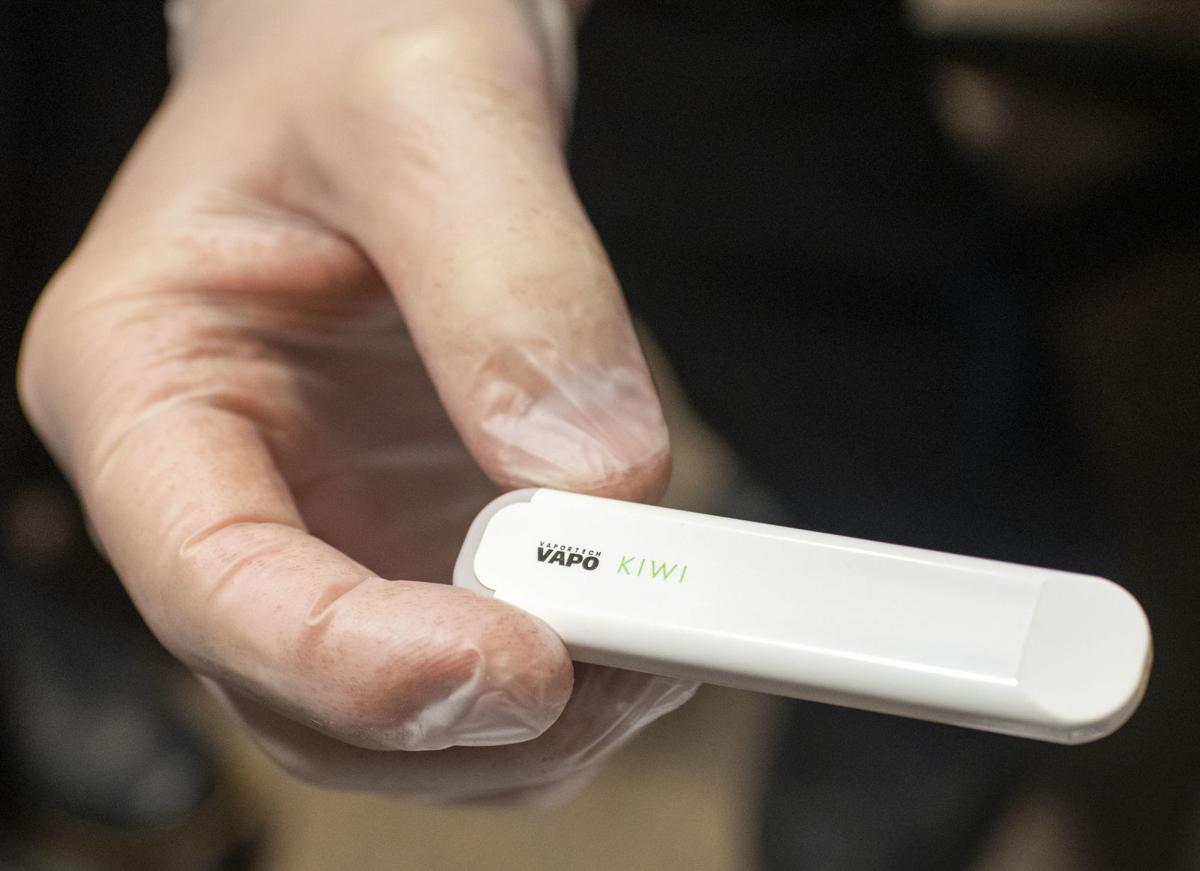 Many vaping devices look almost identical to USB memory sticks, making them sometimes difficult to identify by teachers and parents. 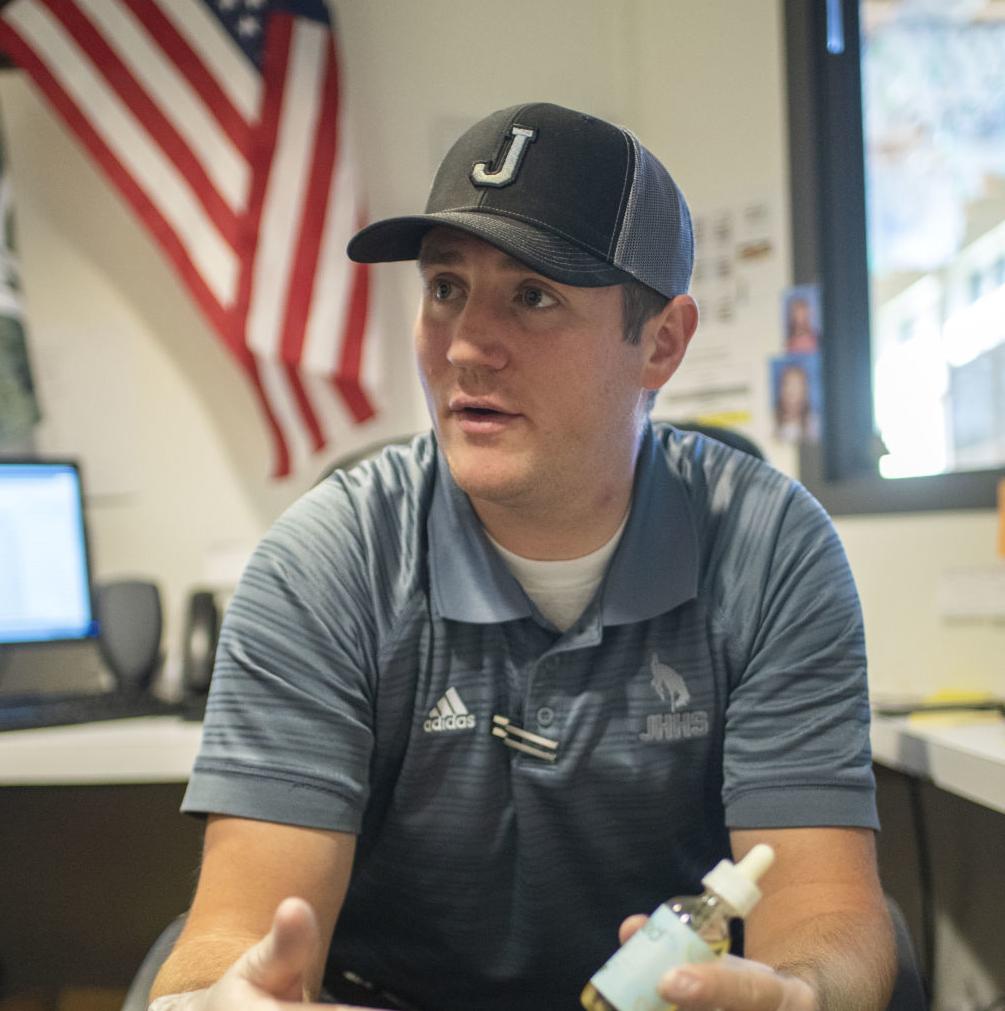 Though most of the vape pens conficated at Jackson Hole High School are simple and basic, Teton County Sheriff’s Deputy Andrew Roundy has caught kids with larger devices, called “vape mods,” which are more expensive and enhanced — or modified, hence the “mod” name — to include certain advanced features.

Many vaping devices look almost identical to USB memory sticks, making them sometimes difficult to identify by teachers and parents.

Vape use at Jackson Hole High School could be as high as 40%, school officials told Teton County Prevention Coalition at its last meeting.

Teton County Health Department Director Jodie Pond relayed the alarming news to the Teton County Board of Health at its Jan. 28 meeting. In an interview with the News&Guide on Monday, Teton County School District Superintendent Gillian Chapman couldn’t recall the exact statistic but was adamant that the trend in her schools mirrored national ones.

Those show that 37% of teens reported having vaped in 2018, according to the National Institutes of Health. In light of that, public health officials and school administrators are searching for ways to stem the tide.

Teton County Chief Deputy Attorney Keith Gingery spoke at the Board of Health meeting, giving the group options on tacks it could take to curb teen vaping, which included banning flavored vape pods. One was an outright ban that would come from the board.

“Boards of health can pass rules that pertain to public health in their area,” he said.

Banning flavored vape pods has gained steam as a solution to rising teen use. Federal law precludes manufacturers from marketing their products to teens and children, but the flavored varieties have still become popular with minors.

A Stanford University project called Research into the Impact of Tobacco Advertising found Juul, the company that dominates the e-cigarette market, targeted teens in its ads by including young people and using social media. Even though the company shifted its advertising in 2018 to feature older smokers who wanted to stop smoking cigarettes, its early advertising had roped in younger users.

“The issue is that they are so small, they’re doing it in the classroom,” Gingery told the board. “It’s not like when we were kids, when people had to go behind the school to smoke a cigarette.”

Not the first time

A ban has precedent in Teton County, though it was short-lived. The Board of Health attempted to ban cigarette smoking in public places in 2009, but the Wyoming Restaurant and Lodging Association sued to stop it. In 2011 Judge Timothy Day ruled in favor of the association, saying the board had overstepped its bounds. In the subsequent decade, bars and restaurants eliminated smoking voluntarily.

Gingery said he thought Day’s decision was wrong and that the board could order a flavored vape ban if it wanted to. Chairman Dr. Dan Forman, who was on the board in 2009, seemed wary in light of that past experience.

“I’ve been burned before,” he said.

Other options Gingery brought to the board mostly involved waiting and advocating. The Federal Drug Administration has a deadline of May 12 for vape manufacturers to file for market authorization.

Companies were able to bring products to market without doing so, but now that the deadline has been set, any company that doesn’t file by the deadline will be prioritized for enforcement (which could lead to removal), according to the agency. Gingery said the enforcement policy might be a first step toward banning flavored products, so the board could wait to see what the FDA will do.

The Board of Health could also lobby the state government to increase the smoking age from 18 to 21, which would parallel an FDA decision from late 2019. It could also ask the town of Jackson to enact a ban, which might hold more legal weight, which the Health Department has already considered.

“The Community Prevention Coalition did approach the Town Council to talk about a ban,” Pond said, but as of the board’s meeting it had not discussed such a move.

Public health officials are not the only people thinking about how to combat teen vaping. Superintendent Chapman said it has become such a problem in schools that administrators want to install air-quality sensors in bathrooms that could sense vaping in ways smoke detectors can’t.

Such equipment is expensive, so administrators haven’t purchased it yet. In the meantime Chapman supports a ban on flavored pods, if that is all the community has an appetite for.

“If the only step we’re willing to take is banning flavored pods,” Chapman told the News&Guide, “that’s a step in the right direction. The harder we can make it on kids, the better.”

Bans would likely be just one part of a strategy. Chapman said many students buy their pods on the internet, so a local ban wouldn’t stop them.

At the Board of Health meeting, County Health Officer Dr. Travis Riddell said bans could also push users to black-market products, some of which were linked to the rash of vaping-related lung injuries in 2019, though those were mostly filled with marijuana. With public health officials divided on whether a ban on flavored pods would decrease teen vaping, it could just push users to black-market pods with more contaminants.

Chapman pointed to school districts around the country that are suing manufacturers as one possible option. National Public Radio reported public schools in San Diego are suing Juul because teen vaping is “diverting funding away from learning toward educational campaigns, prevention, and treatment.”

School districts in Washington state, Missouri, New York and other states have joined similar lawsuits, and Chapman is interested in joining a class-action suit should that option arise. She said she didn’t have enough information to go that route at the moment, but saw it as a viable option.

“It’s criminal that we’re allowing this to occur because of the unknown health risks,” Chapman said.

Though the Board of Health didn’t make any determinations as to a course of action, at least one participant of the meeting shared Chapman’s combativeness.

“Going back to this whole issue of what your authority is,” Pond told the board on the subject of enacting a ban, “I’d like to get some new battle wounds.”