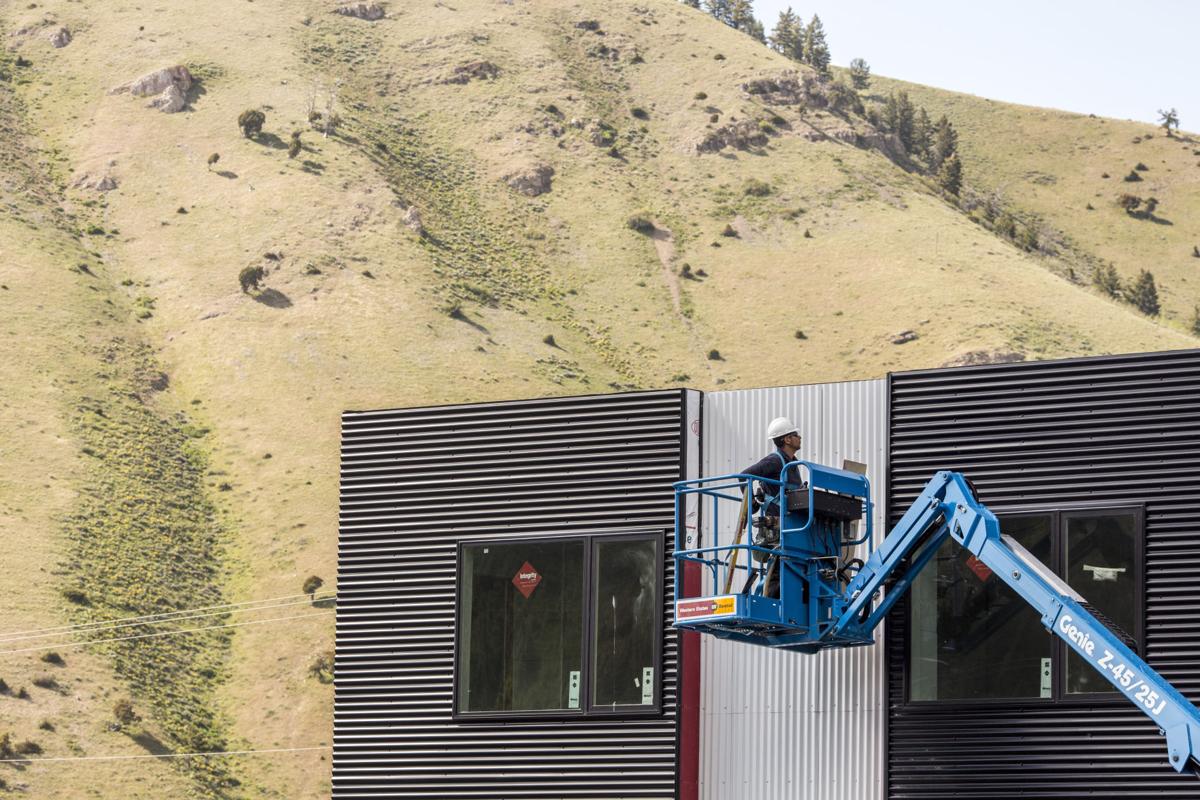 A construction worker puts finishing touches on the exterior of the future St. John’s Medical Center employee housing at West Kelly Avenue and South Milward Street. Shaw Construction crews broke ground on the property in September and plan to finish this August on the 12-unit complex. The units will rent at market rates. 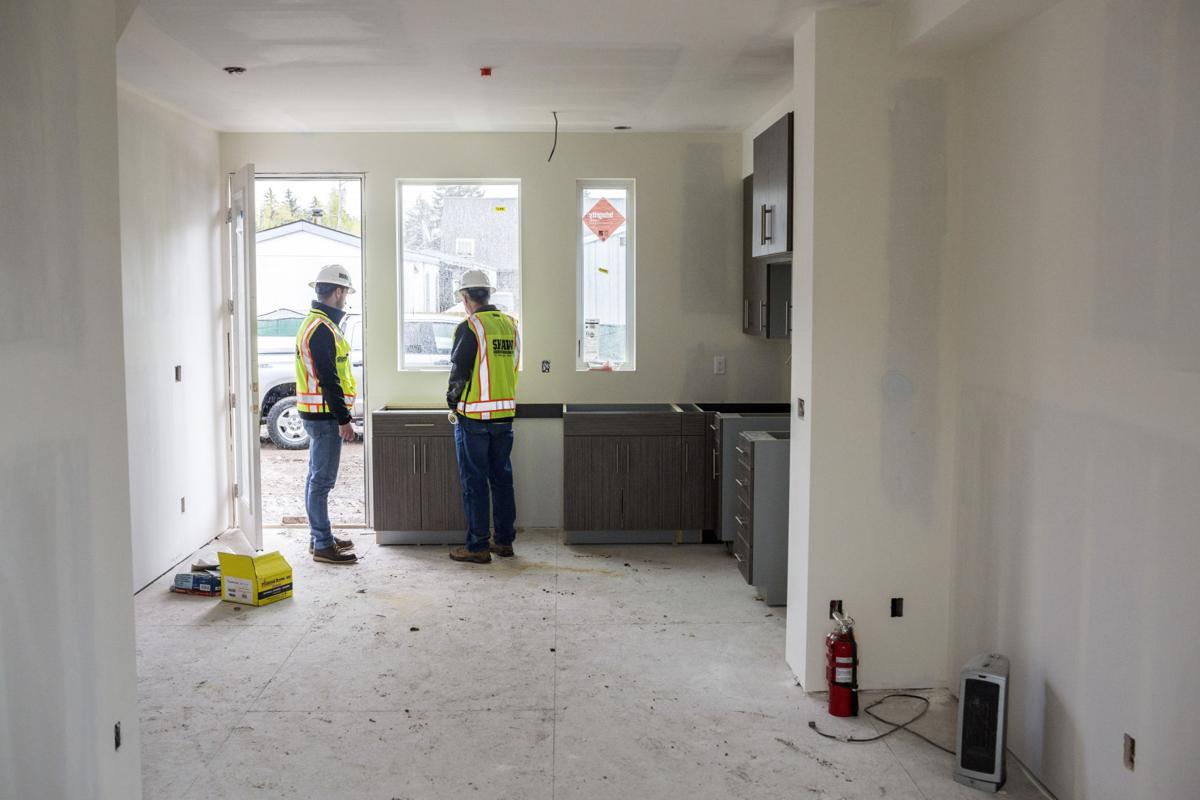 A construction worker puts finishing touches on the exterior of the future St. John’s Medical Center employee housing at West Kelly Avenue and South Milward Street. Shaw Construction crews broke ground on the property in September and plan to finish this August on the 12-unit complex. The units will rent at market rates.

Unless you work for St. John’s Medical Center you can stop eyeing the minimalist apartments being constructed on the corner of Milward Street and Kelly Avenue — the 12 two-bedroom units are for hospital employees only.

Construction began in September 2016, and St. John’s Facilities Director Jim Johnston said the project is on time and on budget. The rental units are expected to be done in early August, and after getting a certificate of occupancy, Johnston expects to have residents move in late August or early September.

The apartment complex brings the hospital’s employee housing offerings up to 42 units. It resulted from a housing task force created by the board of trustees and a subsequent housing study done last year.

The question everyone wants to know? Who is going to live there, and how will they be selected.

Johnston said the “beauty of the whole thing” is that hospital staff members, in addition to lawyers, are working on a selection process and grading criteria. He likes that peers of those to who will eventually live there are part of the process.

“We want to be as fair as possible for our employees,” Johnston said.

Possible factors to be considered in the selection criteria include positions that are critical to the hospital — that might be able to be filled or kept filled if employee housing were on the table — as well as tenure.

Once the housing committee figures out those criteria, they’ll present it to the hospital’s board of trustees for approval.

Another thing that’s up in the air is pricing. Johnston said employees will be charged “fair market value” and pay the hospital rent each month.

For an idea of how much that might be, according to the Wyoming Department of Administration and Information Economic Analysis Division, the average rent for a two-bedroom, unfurnished apartment excluding gas and electric in Teton County in 2015 was $1,654. A one-bedroom, one-bath at the Blair Place Apartments costs $1,550 per month for 650 square feet, and a two-bedroom, two-bath unit in the same complex is $1,924 a month for about 1,000 square feet.

When the project received preliminary approval from the Town Council last fall, developer Greg Prugh estimated the units would rent at about $1,800 a month.

The hospital’s board of trustees approved a contract for the project to not exceed $4.5 million, including land and construction costs. Johnston said the land cost approximately $1.68 million and the construction is costing in the neighborhood of $2.5 million, bringing the expenses to roughly $4.18 million.

One of the reasons the project is going smoothly, Johnston said, is the company the hospital is working with, Shaw Construction.

“Working with them has been incredibly organized,” Johnston said. “They’re fantastic. We started on time and we’re still on time.”

Overall, Johnston said, he’s happy with how the project is being completed.

“I’m proud of the whole damn thing,” he said.

The buildings are modern looking, with gray paint and red accent colors, designed by Dynia Architects. Johnston said the design was based on efficiency and the size of the lot the hospital was able to purchase.

The apartments have all the basic amenities: a living room, kitchen with a dishwasher and refrigerator, two bedrooms, one bathroom and an unfinished basement with a washer, dryer and deep sink.

Johnston pointed out the amount of storage space the basement offers — yet another luxury that few Jacksonites have for all their gear.

While the exact size varies, each is around 1,000 square feet. Residents will be close to their neighbors, at times sharing a wall or having windows that look into their neighbors’ apartments.

There will be one parking spot for each apartment as well as street parking.

“It’s a service for our employees,” Johnston said. “But if we could do even more, we would.”

Johnston wanted to make the apartments as nice as possible, even though many looking for housing in Jackson are content with a lot less.

There is the possibility that two single people could share a unit, instead of a family. But Johnston said that’s still up in the air and might be a factor considered by the housing committee.

He did say that might make the parking situation more difficult, which the Town Council worried about when the project was proposed.

A similar problem might present itself if additional people lived in unfinished basements.

Johnston might seem particularly excited for the employee housing, but there is a reason for his seemingly-boundless optimism.

“I enjoy what I do,” Johnston said. “I tell myself every single morning that I’m going to make a difference in someone’s life.”