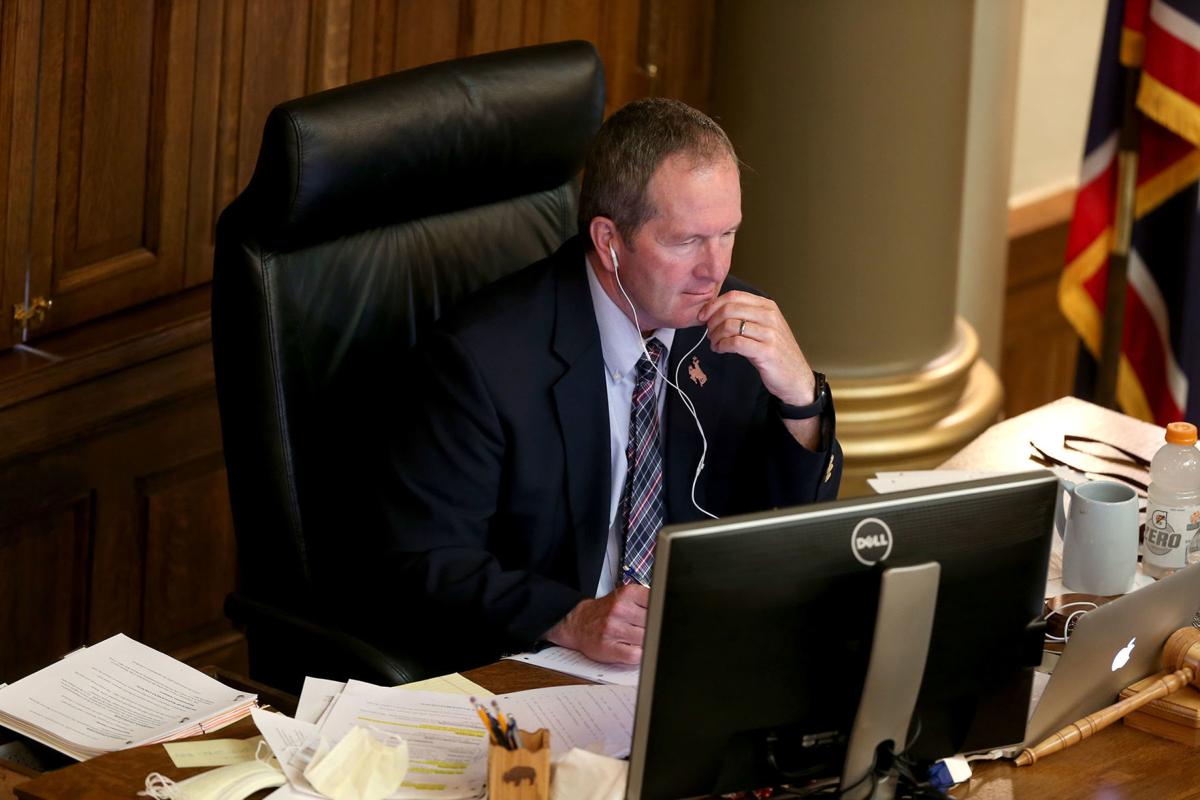 Speaker of the House Steve Harshman, R-Natrona, studies bills digitally during the special session of the Wyoming Legislature, which happened almost entirely virtually with only a few legislators in Cheyenne. Harshman said this was a “first-things-first” session, where the legislature would only consider a few, pressing measures. Subsequent “second-things-second” special sessions are likely to happen over the summer. 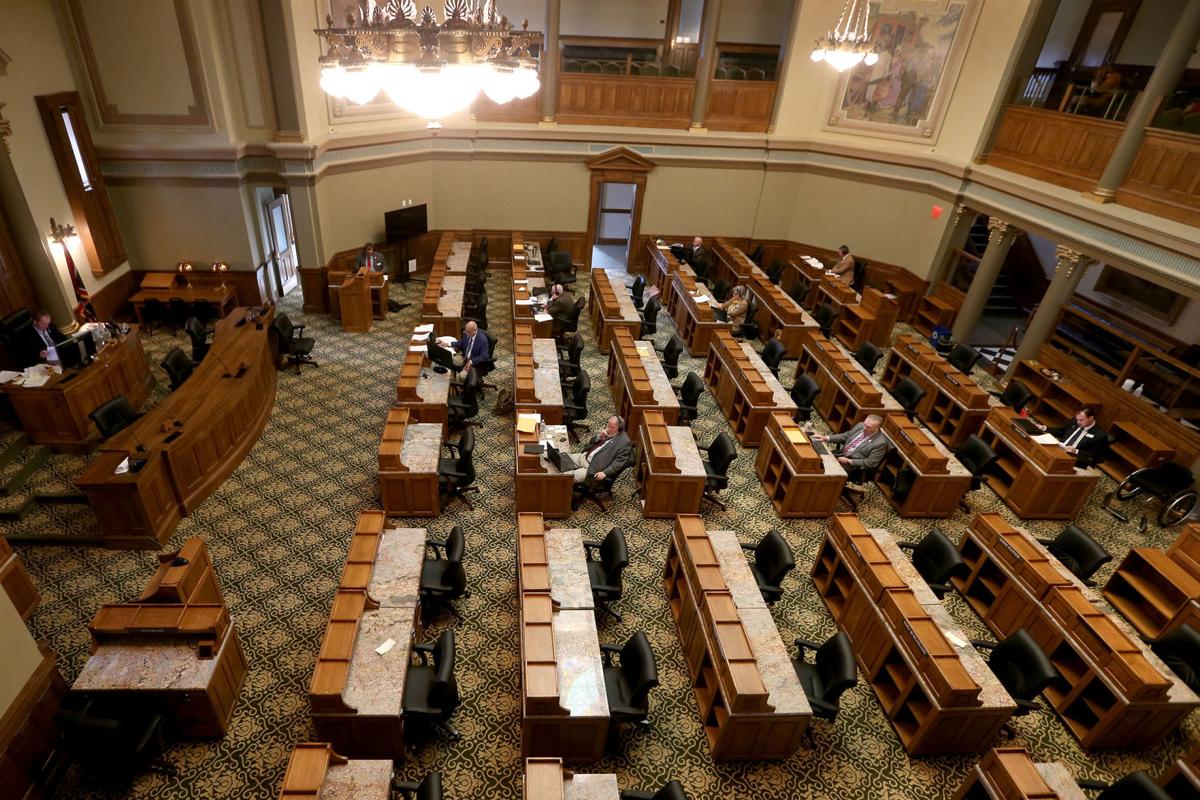 Few legislators sit in a nearly empty House chamber during a special legislative session Friday, May 15, 2020, inside the state capitol in Cheyenne. The session was conducted online as many legislators opted to use livestreaming, rather than appear inside the capitol.

There was a loose plan for Wyoming Legislature’s special session: Lawmakers would consider, amend and pass four bills, ideally getting Gov. Mark Gordon’s signature soon after.

But at the 11th hour, Sen. Dave Kinskey, a Republican representing Sheridan and Johnson Counties, proposed a fifth bill. And when the dust settled, only three bills remained.

“It was not uneventful,” Rep. Mike Yin, D-Teton, told the News&Guide in a phone interview Monday evening.

The governor has not signed the three bills that passed, so the legislation has not yet become law.

His staff, however, has indicated he intends to put pen to paper and, if he does, the three bills would immediately allocate $450 million in federal CARES Act dollars to a set of new state programs. Another $400 million would likely become available in July, and the rest of the $1.25 billion that the federal government earmarked for Wyoming would be spent in September.

In the first tranche, $15 million would go to a rent and mortgage relief program. Another $325 million would go toward three business grant programs intended to reimburse coronavirus-related costs and shore up firms that didn’t qualify for the federal Payroll Protection Program, also part of the CARES Act.

The remainder could be spent on aid packages for state agencies, local governments and health care providers, as well as grants to the Wind River Indian Reservation and capital construction projects aimed at beefing up health care infrastructure for physical and mental health facilities.

“Overall, the Legislature did a fairly good job of determining priorities of where to go with the money that was handed down from the federal government,” Yin said. “The goal for us was to really fill in the cracks for all the stuff the federal legislation didn’t cover.”

Two bills, however, did not pass.

One would have allowed Gov. Gordon to transfer money within and between state agencies. But when the Senate tacked on a few amendments to the legislation that would have allowed the executive branch to dip into K-12 and University of Wyoming funding, the House dropped the measure.

Fifty-two representatives, roughly 87% of the chamber, voted against it.

“The House decided to dispense with the bill and not deal with it,” Yin said.

The other hang-up was less over funding than it was over a legal question, specifically what degree of immunity from COVID-related liability to provide business owners and, consequently, what protections to provide workers as Wyoming’s economy reopens.

In contrast to the funding transfer provisions, parts of the liability bill survived. The original bill that Kinskey proposed would have seen sweeping immunity for businesses. It passed the Senate with 23 votes. Sen. Mike Gierau, a Teton County Democrat, was not one of them.

He was hoping to keep debate narrowly focused on the four bills the legislative Management Council had pored over for weeks.

“I didn’t want to start that debate,” he said, “but the debate got started.”

The House didn’t even consider Kinskey’s bill. It was introduced at the 11th hour, didn’t go through the legislative Management Council, and representatives didn’t feel the sweeping immunity provisions in the bill got the public process they deserved.

“We disagreed with the process of how it came to exist,” Yin said.

And though he never voted on the bill, the county’s freshman representative wasn’t a fan.

“It was way too sweeping,” Yin said. “You can’t grant blanket immunity like that because it will allow bad actors to be bad.”

Yin’s example was a meatpacking plant. If the owners knew that someone was infected on the job but continued requiring people to work in tight quarters, there could be a point, he reasoned, where the owners were no longer acting in “good faith.”

“If you’re willing to just let your workers get sick, you shouldn’t have immunity for that,” he said.

In Yin’s mind, an effective bill tackling the immunity question would require balance.

“The question is: How do we make sure that businesses do what is good for their workers but still not put them at the fear of frivolous lawsuits?” he said.

Attorney Jack Edwards said providing “blanket immunity” to businesses would have been a violation of the Wyoming Constitution.

“I think it’s absolutely absurd,” Edwards told the News&Guide on Tuesday. “The issue is our whole system of government is based on due process. In order to engage in due process there has to be notice and an opportunity to be heard.”

The Etna-based lawyer said such a statute would protect the “bad actors.”

“I don’t think there was a lot of forethought,” he said. “Everyone has a right to having their dispute heard.”

Kinskey’s bill ultimately died, but the Legislature still addressed the question of immunity in an amendment Teton County’s legislators suggested was closer to approaching that balance.

Sen. Liisa Anselmi-Dalton, a Sweetwater County Democrat, proposed an amendment that provided employers with some immunity and workers with some options for legal recourse. Her proposal was watered down and eventually adopted by both chambers as an amendment to another piece of legislation that, among other things, gives people the ability to claim workers’ compensation if they contract COVID-19.

Gierau said he supports the measure.

“I felt that was a reasonable compromise from an employee rights standpoint,” he said.

He thinks the adopted measure offers workers some legal protections while also shielding employers from lawsuits. And for Gierau, extending funds to workers through workers’ compensation was key to finding that balance.

The Workers’ Compensation Division, under the Wyoming Department of Workforce Services, has already received 33 claims related to COVID-19, program manager Jodi Bower told the News&Guide in an email. The office has denied 21 claims and opened three, Bower said. Nine more are in pending status.

The bill also could allow employees to sue if their employer is negligent or engages in “willful or wanton misconduct.”

But Gierau, who owns Jedediah’s, a catering company and restaurant inside Jackson Hole Airport, said he felt that provisions protecting employers who act in “good faith” from civil penalties complemented those worker-focused regulations well. The reason, he said, is the uncertainty in dealing with the pandemic.

“The health department cannot give me a sheet of paper that says if you do this, this, this and this, COVID-19 can not occur,” the senator said. “Nobody can do that right now.”

Yin said he thought “there is still work to be done,” possibly in a second special session.

“It still needs public participation,” he said, but “it’s much better than the larger sweeping bill that was introduced.”

The legislature approved three bills in special session that establish a framework for the response, modify existing legislation to address the economic fallout from COVID-19, and establish new programs to respond to the pandemic.

The bills, however, have not become law. By press time Tuesday, Gov. Mark Gordon had not yet signed the new legislation.

Bill 1: A framework for the response

SF1001 provides an overview of how the legislature hopes to spend $1.25 billion in federal CARES Act funds allocated to Wyoming. In general, it sets up where funds can be spent and how they will be distributed: in an initial $450 million tranche, a $400 million tranche in July, and a final tranche with the remaining $400 million in September.

SF1002 establishes the basis for a suite of COVID-19 relief programs for people and businesses. Among other things, the provisions in this bill:

HB1004 establishes three business relief programs that will be administered by the Wyoming Business Council. All three will be subject to each program’s specific requirements.