This Wyoming PBS screenshot shows part of the legislative committee’s lunch with Jackson Hole Working. Members of the advocacy group are seen seated before the full committee at the Teton County Library. 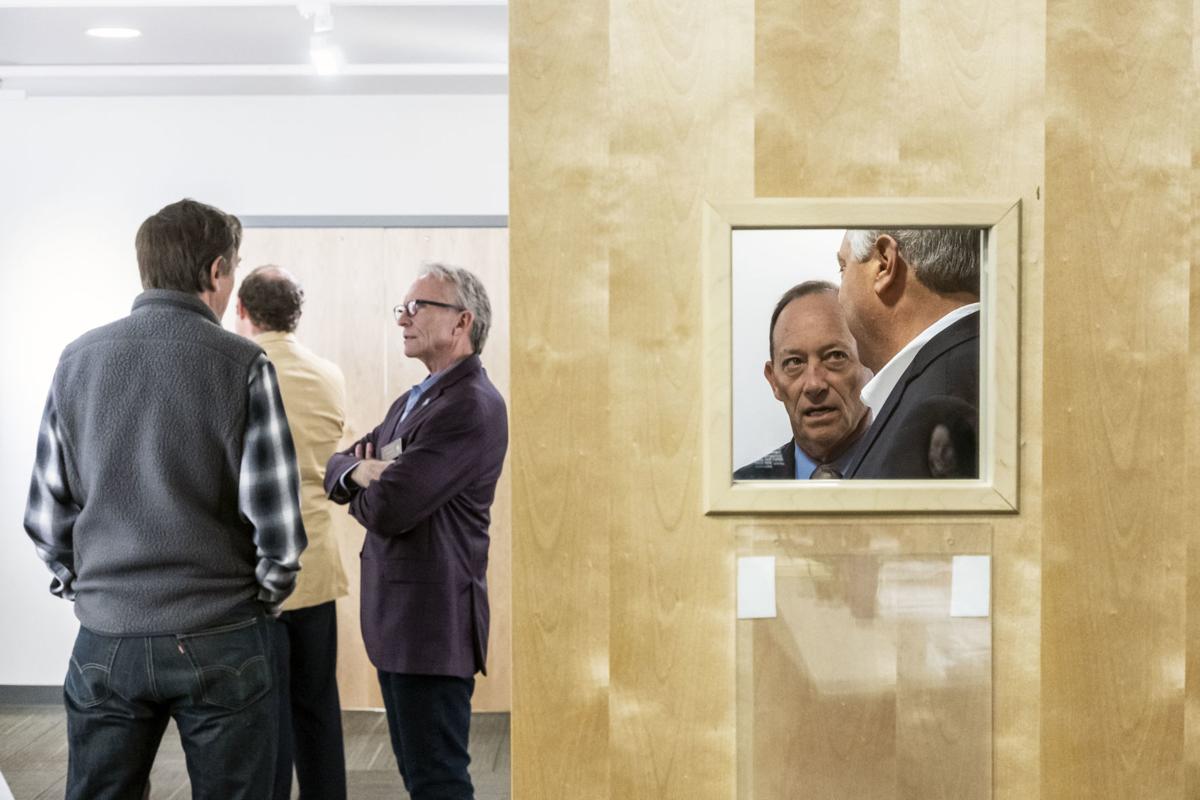 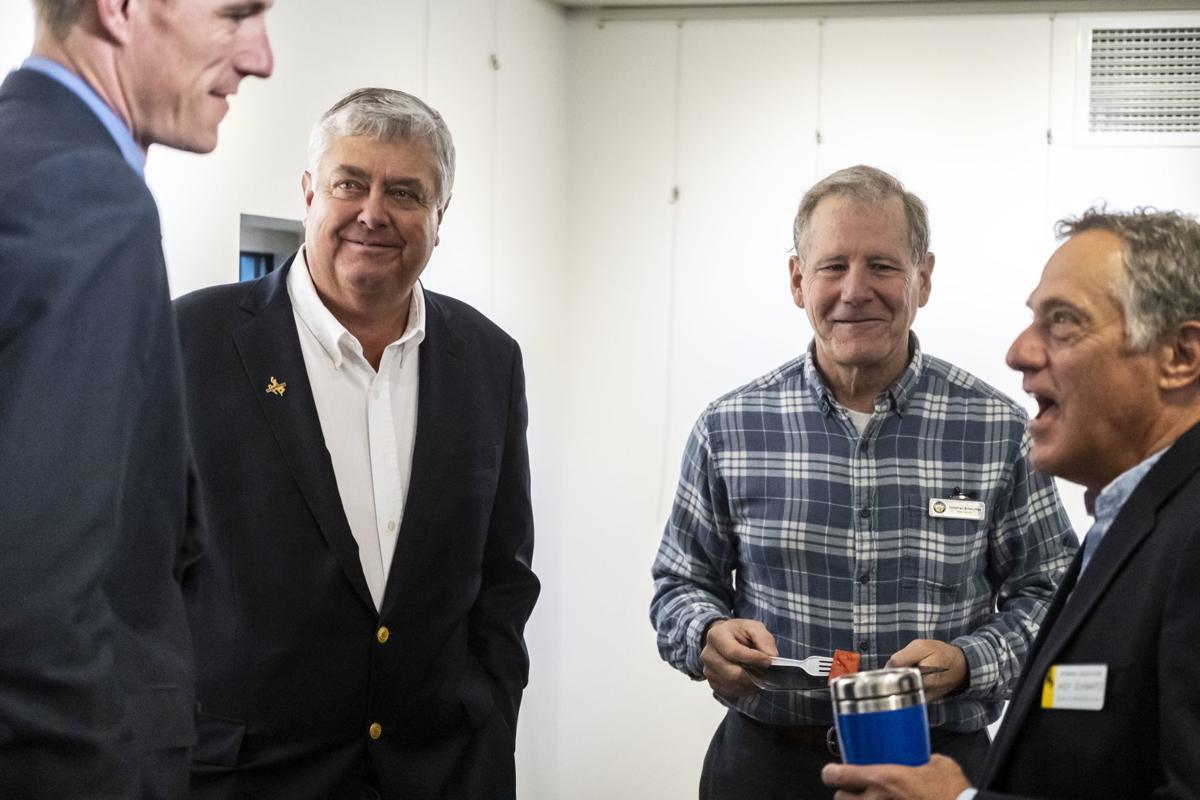 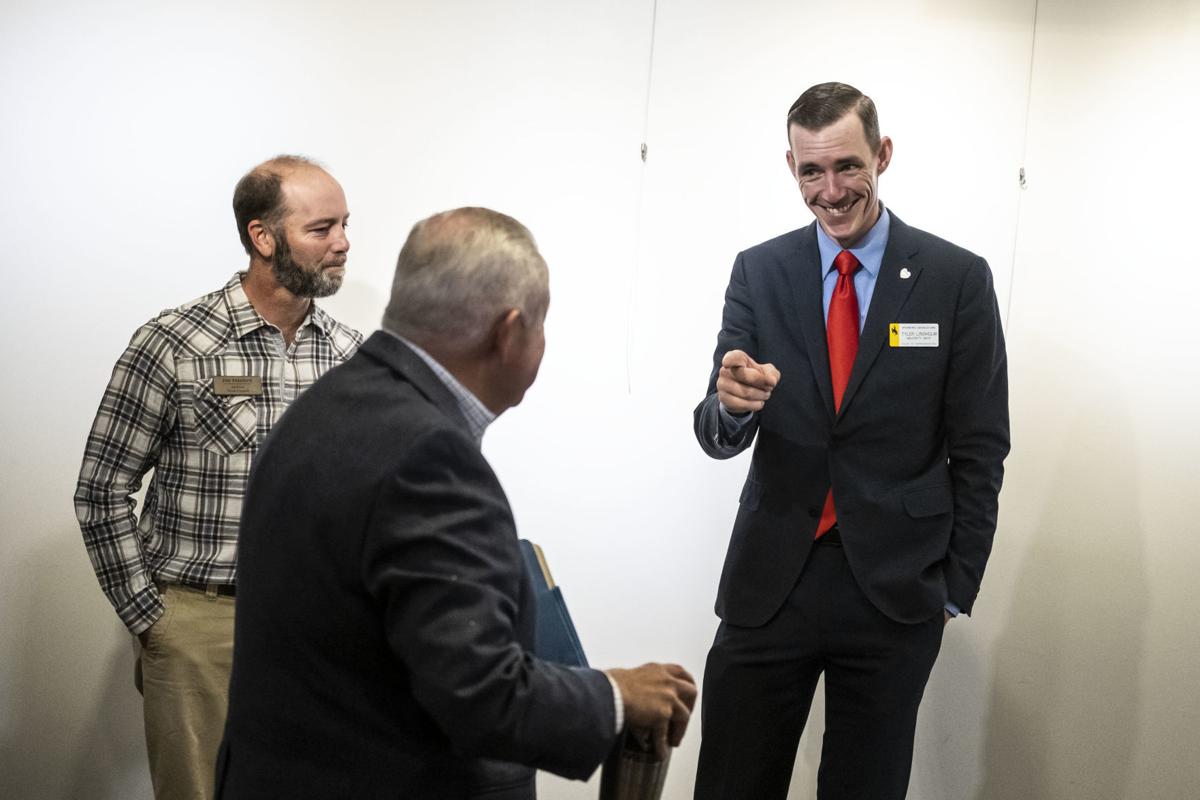 Although housing wasn’t on its agenda, a legislative committee decided last minute to advance a bill that could gut Teton County’s affordable housing program.

While Jackson Hole Working dubbed the event a “public lunch and learn,” it was not included on the agenda for the Wyoming Legislature’s Joint Interim Corporations, Elections and Political Subdivisions Committee.

A handful of local elected officials found out about the lunch only after awkwardly stumbling into the gathering when they showed up early for the committee’s afternoon proceedings. Local officials blindsided by the lunch included state Sen. Mike Gierau, D-Teton.

“It’s not fair because it wasn’t adequately noticed,” Gierau said. “There could have been 200 people here to speak in opposition to some of the views that were expressed by the advocacy group, but they didn’t know about the lunch. No one did except the people that set it up.”

On Tuesday, as the committee was wrapping up, Rep. Shelly Duncan, R-Goshen, cited “testimony at lunchtime” as her reason for bringing up a bill — also not on the agenda — to prohibit towns and counties from requiring developers to build or pay for housing. Duncan told committee members that solving housing issues should be left to the private sector with “less regulation and robust incentives-based programs.”

“That’s my theory,” she said, “and from what we heard from the testimony we had yesterday.”

During last winter’s legislative session, Duncan sponsored House Bill 277. The bill targeted rules the town of Jackson and Teton County updated in the summer of 2018 to increase how much developers — particularly commercial developers — must pay toward affordable housing when building a project.

Rep. Tyler Lindholm, R-Crook/Weston, co-chairman of the committee, said that while affordable housing didn’t make it onto the agenda, people were welcome to comment on anything during a general public comment period at the end of the meeting Tuesday.

So state Rep. Andy Schwartz, D-Teton, was surprised when he showed up early for the committee meeting and walked in on legislators having a lunch discussion on housing rules with Jackson Hole Working.

“There was people sitting at the table where you testify, and virtually the entire committee sitting in their chairs,” Schwartz said. “It sure wasn’t on the agenda.”

“I was not pleased, because I felt like they had scheduled a meeting that wasn’t noticed, wasn’t recorded,” Schwartz said. “It was outside the scope of the meeting notice.”

According to its website, Jackson Hole Working is “a community-driven movement that values the vibrant heart of downtown, a workforce housing market driven by the private sector, the protection of private property rights and the preservation of open spaces and wildlife corridors.”

The group originated in 2016 as the pro-development “Think About It, Jackson Hole” to oppose a rezoning for the downtown district and push for more commercial development. The group later rebranded as “Jackson Hole Working” with the goal of representing working families.

Most recently the group has advocated for an inventory of child care providers and more equitable sources of START funding. The group and its board members also strongly opposed the drastic increases to mitigation requirements in 2018 that upped commercial developers’ affordable housing obligations, saying the rules would place a moratorium on business growth and harm “mom and pops.”

In a statement, Ford said that when the corporations committee came to Jackson, the group “took the opportunity to host a public “lunch and learn to talk about the many issues they have been working on.” Although the lunch was not publicly advertised and local elected officials were not invited, the nonprofit said some members of the public attended.

Lindholm said Jackson Hole Working reached out to him and asked to give a presentation at lunch.

Like Schwartz, Jackson Town Councilor Arne Jorgensen wandered into the lunch meeting and grabbed a plate of barbecue. He said the focus of the meeting was the local housing rules — and just one perspective was presented.

“It went through a very, very narrow lens,” Jorgensen said of the conversation about local housing policy. “That it’s bad and it’s destroying business and Teton County. It was pretty clear.”

“My perception is at that lunch there was one view given and there was one view that was taken,” Jorgensen said. “I felt really strongly that we needed to at least introduce the notion that there are other aspects of this issue that did not get talked about.”

After Duncan brought up the lunch testimony and requested the committee consider the bill prohibiting housing exactions, eight people were allowed to comment for 3 minutes each before Lindholm cut it off, citing time constraints.

Jerimiah Rieman, director of the Wyoming County Commissioners Association, said everybody should have been able to participate in a full conversation on the housing topic, rather than just a presentation from one group.

“I’m kind of disappointed this conversation is coming up at the 14th hour,” Rieman said.“I would just ask for a little bit of consideration that we have a more robust conversation on this topic, take in all the various factors that are in play for all the communities that are trying to deal with this, rather than bring it up in a public comment forum right at the end of a meeting.”

After the chairs closed public comment on housing, Duncan moved to revive last session’s House Bill 277. The committee approved it with a single “no” vote from Rep. Andi Clifford, D-Fremont.

Natalia Macker, chairwoman of the Teton County Board of County Commissioners, said the way the meeting unfolded was “astonishing.” If the committee wanted to discuss the housing regulations while visiting Jackson, she would have rather seen a comprehensive conversation with more than one group’s viewpoint.

“What a wasted opportunity to do the best job we can possibly do,” Macker said.

“It feels like they’re choosing to only hear one perspective within the spectrum, as opposed to there’s a variety of other voices, not just local government elected officials. I would like to think when we make policies and legislate that we want to hear from everyone.”

Schwartz, along with Gierau said it’s common for legislators to have lunch with interest groups. The committee was invited to have a casual breakfast at 7:30 a.m. Tuesday with Teton County commissioners, though Macker said it wasn’t well attended.

Gierau said it’s not common to see a committee dine with an interest group in the meeting chamber, with virtually the whole committee seated and people providing testimony.

“This is why people don’t trust government,” Gierau said. “That’s why people have no faith in government, no faith in what happens, because a group sashays in unannounced, unreported, not displayed in the newspaper, not told to anybody, and says a couple things on one side of the argument. Then, boom, a bill draft comes out. It’s going to be heard by a legislative committee at the next meeting.”

Lindholm said the lunch wasn’t publicly noticed or recorded because it wasn’t a public meeting.

“It was a sponsored lunch where they offered lunch and you could come and go,” Lindholm said. “It was up to you. So it was not public. I mean, we didn’t close the doors. Anybody could’ve walked in, but it wasn’t an official legislative meeting by any stretch. We took no action. We did nothing.”

Schwartz and Gierau both said they don’t necessarily disagree with critics of the housing policies, but the committee should have held a more open discussion.

“I disagree violently and vehemently with the way they did it,” Gierau said. “The committee got hijacked by a group and ... by certain members of the committee who wanted to do it. That’s not right.”

The bill prohibiting housing exactions is expected to resurface at the committee’s next meeting in November in Cheyenne.

This version of the article has been modified to remove a business associated with a member of JH Working. John Carney is no longer associated with the firm formerly known as Carney, Logan, Burke Architects. — Ed.

Shelly Duncan is a JHHS graduate.

I propose a new legislative process to appease the outraged parties. Dispense with the currently required public comment and discussion after a bill has been introduced, and require legislators instead to consult with every single constituent and stakeholder prior to bill introduction.

Seriously, the outrage here is beyond silly.